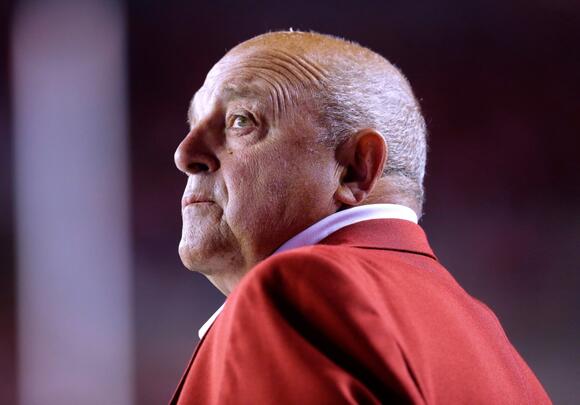 INDIANAPOLIS — During his opening statement at the 2021 Big Ten Football Media Days at Lucas Oil Stadium, commissioner Kevin Warren announced that Barry Alvarez has been named Special Advisor for Football. He will begin his new role starting Aug. 2, 2021.

Alvarez is a former Wisconsin head coach and athletic director who earned membership in the College Football, Rose Bowl, Orange Bowl, and Wisconsin Halls of Fame.

“Barry has been blessed with an illustrious career in college athletics and his impact on college football and the Big Ten Conference has been significant,” Warren said. “He understands the history and traditions of the Big Ten. I trust Barry and we look forward to working with him on relevant football-related issues and building upon the strong relationships we have with the College Football Playoff, our broadcast and bowl partners, as well as our member institutions and student-athletes.”

Alvarez finished his 32nd season at Wisconsin in 2021, which included his 18th year as the university's athletic director. He previously spent 16 seasons as the coach of the Badgers football team. Alvarez concluded his career with the Badgers in June.

After arriving in Madison in 1990, Alvarez helped lead Wisconsin to the program's first-ever Rose Bowl victory in just his third season as the head coach. He is one of 16 Big Ten coaches to ever win 100 games as a coach but retired from his position after the 2005 season.

He was named Director of Athletics in 2004 and spent two years as both the Director of Athletics and head football coach. Wisconsin had considerable success during Alvarez’s tenure with the athletic department, winning a combined 16 national titles and 74 conference regular-season or tournaments. In the 2017-18 season, he earned Under Armour Athletic Director of the Year honors.

Barry Alvarez will not only forever thank iconic Irish head coach Lou Holtz for being the most influential mentor he ever had, but he will also forever recognize the three seasons he spent as a Notre Dame assistant from 1987-89 as the launch point to his 32-year career at Wisconsin where he became a Hall of Fame football coach and a renowned athletics administrator.
WISCONSIN STATE・1 DAY AGO
imore.com

As the world of college continues to change and evolve, Paul Finebaum appears determined to remain the same. On Friday, Finebaum continued his routine of bashing Jim Harbaugh at every opportunity. Appearing on an episode of Keyshawn, JWill and Zubin, Finebaum once again launched into tirade regarding Harbaugh's tenure at the University of Michigan.
NFL・27 DAYS AGO
AL.com

The end of an Alabama football era comes Saturday

The night of Aug. 30, 2008 changed everything. From his perch in the Georgia Dome radio booth, Eli Gold sounded prophetic as the final seconds ticked down on that Saturday night of Labor Day weekend. “Welcome to 2008,” he proclaimed as Alabama’s sideline emptied onto the turf. “The world is...
ALABAMA STATE・25 DAYS AGO

If Nebraska head coach Scott Frost wanted to show that he was still the man for the job at his alma mater, then the 2021 season didn’t get off to a great start. The former Cornhuskers quarterback returned to Lincoln ahead of the 2018 season as the university sought to turn the page from the Mike Riley era. So far, it hasn’t been a good return on investment as Frost has struggled to a 12-21 record, including a 9-18 mark in the Big Ten.
COLLEGE SPORTS・24 DAYS AGO
The Spun

On Saturday morning, ESPN’s College GameDay kicked off from Ames, Iowa ahead of a huge matchup between No. 9 Iowa State and No. 10 Iowa. While that contest will be the primary focus for the show a little later, Kirk Herbstreit and company also took a look at other games going on. During the show, the conversation eventually shifted to LSU.
AMES, IA・13 DAYS AGO
Yardbarker

Deion Sanders has made it a trend to bring in some of football’s biggest names as guests since becoming Jackson State head coach. He did it again Sunday with Hall of Famer Terrell Owens. Owens was spotted on the sideline during the fourth quarter of Sunday’s game against Florida A&M....
JACKSON, MS・18 DAYS AGO
The Spun

Times are tough at the Florida State football program right now. The Seminoles fell to 0-3 on the season with Saturday’s loss to Wake Forest. Florida State opened the season with a close loss to Notre Dame, appearing to show some improvement. However, Mike Norvell’s team was upset by Jacksonville State in Week 2 and then lost to the Demon Deacons in Week 3.
FLORIDA STATE・4 DAYS AGO

Urban Meyer hasn't been a head coach in the NFL for long, but there are already questions about the Jacksonville Jaguars bench boss's transition to the league. Meyer is reportedly "rubbing the Jacksonville Jaguars staff and players the wrong way" because of his temper and unfamiliarity with the NFL level, according to Jason La Canfora of CBS Sports.
NFL・11 DAYS AGO
Outsider.com

Hello USC, this is Urban Meyer. About that job opening you have right now, how soon do you need me? Tonight is fine. Send the jet. College football fans were abuzz at the news of USC firing Clay Helton as their head football coach, Monday, two days after the Trojans lost to Stanford. And many pondered if Meyer, who has coached all of one game with the Jacksonville Jaguars, would be ready to ditch his brief NFL experiment and head west.
NFL・10 DAYS AGO
Sportsnaut

Oklahoma Sooners athletic director Joe Castiglione has issued an apology to fans who attended Saturday’s game against Nebraska. In a Twitter post Sunday, Castiglione acknowledged the concession operations were not up to Sooner standards. “We want to acknowledge the complaints we have received about concession operations from fans attending yesterday’s...
NEBRASKA STATE・4 DAYS AGO
onthebanks.com

It has been a funky start schedule wise but now all 14 Big Ten teams have been on the field and have a game under their belt. There were Thursday games, Friday games, conference games, non-conference games — and even a Week 0 game. There was plenty to watch early on with ranked matchups and of course, Ohio State expecting to be one of the best teams in the nation once again.
COLLEGE SPORTS・14 DAYS AGO
Pioneer Press

MIAMI (OHIO) at GOPHERS, 11 a.m., ESPNU. The Gophers announced a sellout crowd of 50,805 for last week’s season opener against Ohio State. Given the loss to the Buckeyes, the morning kickoff and the lesser opponent here, it will be interesting how full the The Bank is for this one. Gophers, 34-17.
COLLEGE SPORTS・13 DAYS AGO
BuckeyesNow

Well, not an unreasonable thing to think, given that Illinois is right back on track to go 2-10 like I predicted. But when I was well aware of the risk of getting MEEP MEEP’d, how upset can I really be?. Well, find out by listening to the Week 1 recap...
COLLEGE SPORTS・14 DAYS AGO
kfornow.com

Big Ten football standings 2021: Where each team stands in conference

Big Ten football standings for the 2021 season, updated each week. Here's how Michigan Wolverines, Michigan State Spartans, Ohio State Buckeyes and the rest of the league is faring (and here's the full Big Ten schedule for the season). The division winners will meet at Lucas Oil Stadium in Indianapolis...
MICHIGAN STATE・13 DAYS AGO
Digital Collegian

After an exciting return to college football in the opening week of the 2021 season, Week 2 didn’t disappoint. With some intriguing matchups across the Big Ten, there were upsets and teams that had statement wins as well. While these games didn’t all affect the Big Ten standings, each outcome...
IOWA STATE・11 DAYS AGO