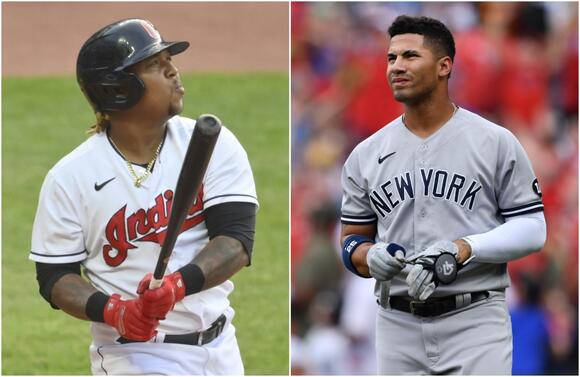 NEW YORK — With the Trade Deadline just over one week away, trade proposal season is upon us.

In this proposed blockbuster, the Yankees add an MVP-caliber infielder and a left-handed hitting outfielder, but part ways with one of their best young players in the process.

Here's the hypothetical deal, presented in a recent piece over on MLB.com that featured five different possible trades designed to help the Yankees contend for a championship in 2021.

Yankees get: 3B José Ramírez, OF Bradley Zimmer

There's a lot to unpack here. For those that don't follow Cleveland at all, José Ramírez is one of the best in the business. He nearly won the American League Most Valuable Player Award last year, finishing second in that race during the pandemic-shortened campaign (hitting .292 with 17 home runs over 58 games).

Imagining his bat in New York's lineup is certainly intriguing. The Bombers have been missing a switch-hitter capable of adding some balance to the lineup, a player that excels in putting the ball in play, driving extra base hits from both sides of the plate.

Plus, Ramírez is under contract through the end of the 2023 season, some control while other options at the Trade Deadline are rentals for just the rest of this year.

As for Zimmer, he fits the mold of a player this team has been seeking to add for quite some time. The outfielder isn't producing earth-shattering numbers, but he brings speed and defensive versatility to the table, all the while adding another lefty to a righty-heavy order.

Sounds like a plan, right? Well, New York would be sacrificing their presumed shortstop of the future in this deal, packaged along with two of the best prospects in the organization's farm system.

While you ponder the pros and cons, here's the architect of the deal (MLB.com's Thomas Harrigan) with more on why it could work:

Yes, the Yankees need outfielders more than infielders right now, but this trade is as much about 2022 and ’23 as it is about this season. New York’s roster is fundamentally flawed, with too many plodding right-handed hitters and little flexibility. It would hurt to give up on Torres, who is still just 24 years old and produced 62 homers with an .849 OPS over his first two seasons, but the Yanks need to do something bold to salvage their current core’s title hopes.

Ramírez, a switch-hitter and well-rounded star who finished among the top three in the AL MVP Award voting in 2017, ’18 and ’20, would be the spark the franchise needs. The Yanks already have a third baseman in Gio Urshela, but they shouldn’t let that stop them from acquiring a player of Ramírez’s caliber. Besides, with Luke Voit hurt again, the Yankees are going to need DJ LeMahieu to handle first base, leaving an opening at second that Ramírez can fill. This trade also helps New York address its center-field issue. Zimmer doesn’t have much power, but he’s a speedy player who can handle center, bats from the left side and has reached base at a .368 clip over the past two seasons.

Torres is finally starting to turn his season around, but there are still concerns about his longevity at shortstop. Gil and Alcantara certainly have upside, but to reel in a talented player like Ramírez, New York would absolutely need to consider something like this.

All that being said, the odds of this hypothetical coming to fruition are slim. New York appears to be focused on adding a premier outfielder at the Deadline. Ramírez would create a logjam in an already-crowded infield (if everyone is healthy) while the Yankees' shortstop prospects (to fill in for Torres going forward) are still years away in the minors.

Plus, as noted by Harrigan, it's been reported that the Indians would need to be completely blown away to ever actually trade Ramírez. Two top prospects and a 24-year-old phenom is quite the return. Would it be enough, though?

New York and Cleveland do have a history of making Deadline deals. Remember the Yankees' retool in 2016, shipping Andrew Miller to the Indians for the stretch run, receiving a package that included Clint Frazier and Justus Sheffield in return.

Winners of nine of their last 12, as the Deadline looms, it's getting harder to envision the Yankees selling. Cleveland, meanwhile, sits 8.5 games back in their division, a club that seems destined to part ways with Ramírez after they traded away Francisco Lindor this past offseason.

The Yankees’ new No. 9 hitter nearly put the team on his back with two big swings Sunday. A leaky bullpen made sure that wasn’t the case, but Gary Sanchez turned in a loud day anyway with two home runs and six RBIs in an 8-7 loss to the Orioles at Yankee Stadium.
MLB・12 DAYS AGO
audacy.com

The Orioles grounds crew's apparent ejection from Wednesday night's game was not what it seemed, according to the umpire involved in the bizarre scene at Camden Yards in Baltimore. According to the Associated Press, crew chief Tim Timmons later clarified that the roughly 20 workers were not ejected from the...
MLB・2 DAYS AGO
The Spun

The New York Yankees have lost eight of their last nine games and will need to battle hard to get a Wildcard spot in the playoffs. In an effort to fix some issues, the Yankees are making a pretty significant roster move. According to MLB insider Bob Nightengale, the Yankees...
MLB・5 DAYS AGO
610 Sports Radio

Add another “scandal” to the Yankees’ season, as now, after losing two of three to the Mets in the Citi Field half of the Subway Series, we have ‘whistle-gate.’. If you don’t know by now, the story goes like this: on Saturday, the prevailing thought was that Taijuan Walker was tipping pitches, and the Mets believed the Yankees were using various whistles to articulate which pitch was coming.
MLB・5 DAYS AGO

The Yankees will move Gleyber Torres from shortstop to second base, manager Aaron Boone announced to reporters Monday (Twitter links via Bryan Hoch of MLB.com). The move is designed “to take some pressure off” Torres. Gio Urshela has the day off Monday but will get reps at shortstop down the stretch, beginning Tuesday, with DJ LeMahieu playing third base. Tyler Wade is at short Monday, with Torres at second.
MLB・5 DAYS AGO
New York Post

The free-falling Yankees are remaking their infield on the fly with less than three weeks left in the regular season, finally moving Gleyber Torres over to second base from shortstop. “Try to take a little pressure off him,’’ Boone said of the switch to second for Torres, who has been...
MLB・5 DAYS AGO
Lookout Landing

An exciting win against the Red Sox, highlighted by a dominant Logan Gilbert performance and Mitch Haniger go-ahead home run, brings the Mariners within two games of a wild card spot. Second game of the series tonight at 7:10. Let’s do this. In Mariners news... The ACL Mariners are having...
MLB・4 DAYS AGO
Pinstripe Alley

Good afternoon everyone, let’s open up the mailbag for more of your Yankees questions. Remember to send in your questions for our weekly call by e-mail to pinstripealleyblog [at] gmail [dot] com. Byron Fear asks: Why the hell bench Voit after he was named player of the week, we can...
MLB・8 DAYS AGO

The New York Yankees are currently on a three-game winning streak as they try to retain their spot in the Wild Card. However, both Toronto and Boston emerged victorious on Wednesday, leaving the three teams in a tie at the top of the WC standings. Both Boston and New York...
MLB・2 DAYS AGO
chatsports.com

Gleyber Torres is out of the lineup Saturday for the Yankees

Gleyber Torres and Gio Urshela are out of the starting lineup for the Yankees on Saturday, BaseballPress.com reports. Torres had just returned from the injured list Friday after missing 22 games due to a thumb injury. Torres went hitless in his return, and it looks like the Yankees will play it safe and give him the day game after a night game off. Torres should return to the starting lineup Sunday and is likely available off the bench for the game Saturday.
MLB・14 DAYS AGO
Sportsnaut

Torres went 0-for-4 in Friday's 4-3 extra-innings win over Baltimore. Torres missed nearly a month with a sprained left thumb, and he showed a little rust at the plate with his 0-fer performance. Prior to the injury, he had hit safely in 17 of 22 games coming out of the All-Star break, posting a .300/.337/.500 slash line in that span. He should take over as the Yankees' everyday shortstop going forward.
MLB・14 DAYS AGO

Former New York Yankees infielder Starlin Castro was cut on Thursday by the Washington Nationals after completing a 30-game suspension for an alleged domestic violence incident, according to The Athletic. Castro was suspended on July 30 by MLB commissioner Rob Manfred after an investigation concluded that he violated the league’s...
MLB・16 DAYS AGO
CBS Sports

Torres isn't starting Tuesday's game against the Blue Jays. Torres has been in the lineup for three of the four games since he returned from the injured list, and he's gone 3-for-13 with two runs, an RBI and four strikeouts during that time. Andrew Velazquez will take his place at shortstop and bat ninth.
MLB・11 DAYS AGO
audacy.com

Andrew Velazquez played shortstop on Tuesday night, but make no mistake: Gleyber Torres is the starting shortstop for the New York Yankees – and even though he has struggled as of late, YES Network’s John Flaherty reiterated to Marc Malusis on WFAN Tuesday that Gleyber will get every opportunity to figure it out down the stretch.
MLB・10 DAYS AGO
wmleader.com

When Andrew Velazquez and Rougned Odor were playing the left side of the infield for much of the Yankees’ 13-game winning streak, the thought was, “Just wait until Gleyber Torres and Gio Urshela get back.”. Now they are and, if anything, the Yankees left side looks as shaky as ever.
MLB・11 DAYS AGO
chatsports.com

The New York Yankees are currently on a three-game losing streak after falling to the Toronto Blue Jays on Monday afternoon. During this losing streak, the Yankees have only scored 10 runs, as their offense has simmered down to a bowl of cold chicken noodle soup. However, the return of...
MLB・11 DAYS AGO
Newsday

Gleyber Torres hasn’t been good in the field or at the plate this season. As a result, regular playing time down the stretch is anything but guaranteed. Andrew Velazquez started a second straight game in place of Torres on Wednesday night, and Aaron Boone spoke in generalities about when the club again will consider Torres the everyday shortstop.
MLB・10 DAYS AGO
CBS Sports

Torres went 1-for-4 with a two-run home run and a strikeout in Sunday's 7-6 loss to the Mets. Torres continued his solid weekend Sunday with a sixth-inning two-run shot off Mets reliever Jeurys Familia. The long ball was his first since July 21, ending a 25-game drought, and gives the shortstop seven on the season. After hitting 38 home runs in 144 games in 2019, Torres has regressed to 10 combined in 150 games during the last two seasons.
MLB・5 DAYS AGO
FanSided

Last week, when New York Yankees manager Aaron Boone said Andrew Velazquez was expected to remain on the roster when Gleyber Torres was activated, it was certainly fuel for further discussion. There have been a lot of different feelings surrounding Torres’ absence and Velazquez’s debut with the Bombers. The Yankees...
MLB・12 DAYS AGO