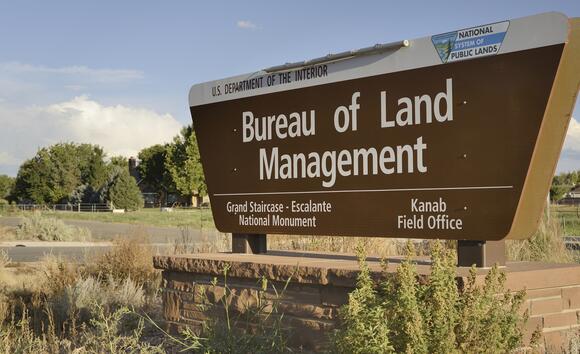 Manchin’s vote for Stone-Manning ensured the controversial nominee could advance the committee on a deadlocked 10-10 vote since all panel Republicans opposed her. It came after an emotional debate of her nomination that lasted nearly two hours.

Republican senators have accused Stone-Manning of having a past affiliation with an "ecoterrorist" organization and deceiving the committee regarding a three-decade-old “tree spiking” criminal case.

“It is hard to imagine a nominee more unqualified than Tracy Stone-Manning,” said Sen. John Barrasso of Wyoming, top Republican of the Energy Committee. “Her actions and her lies should cost her this nomination.”

Barrasso and other Republicans argue Stone-Manning is not forthcoming about the incident, in which she helped send a threatening letter to authorities informing them of the "spiking."

The opposition from all committee Republicans signals a tough vote on the Senate floor, although there are no signs any Democrat will oppose her.

Manchin said he has been unable to find evidence that shows Stone-Manning “was an ecoterrorist, spiked trees, or lied to the committee.”

He called her a “very well qualified problem solver” who has “brought people together.”

Sen. Martin Heinrich, Democrat of New Mexico, said he is "disgusted" about how Republicans waged a campaign against Stone-Manning and called their effort the "worst example of character assassination I have ever seen on this committee."

She is a former director of Montana’s Department of Environmental Quality who currently serves as a senior adviser for the National Wildlife Federation.

Daines denied that attack, calling any tensions from that race "water under the bridge."

Former Missouri governor Eric Greitens (R), who is running for Senate, said Tuesday that if he wins next year, he will not support Senate Minority Leader Mitch McConnell (R-Ky.) as former president Donald Trump tries to oust the GOP party leader. Since announcing in March that he will run for...
PRESIDENTIAL ELECTION・1 DAY AGO
KFOR

House Republican leadership announced they would whip votes against the $1.2 trillion infrastructure bill negotiated by a bipartisan group of senators when it comes for a vote on the House floor.
CONGRESS & COURTS・15 HOURS AGO
Reuters

WASHINGTON, Sept 22 (Reuters) - Negotiations in the U.S. Congress to tighten police practices following the 2020 murder of George Floyd in Minneapolis have collapsed, Democratic Senator Cory Booker said on Wednesday, as President Joe Biden blamed Republicans for the failure. The end of congressional negotiations, at least for now,...
CONGRESS & COURTS・15 HOURS AGO

SANTA FE, N.M. (AP) — Las Cruces-based defense and civil rights attorney Margaret Strickland was confirmed Tuesday by the U.S. Senate to serve as a federal judge in New Mexico, where two prior nominees from President Donald Trump were sidelined in the runup to the 2020 election. Strickland was among...
LAS CRUCES, NM・18 HOURS AGO
WashingtonExaminer

EXCLUSIVE — Ohio Republican Rep. Bob Gibbs introduced articles of impeachment against President Joe Biden on Tuesday, citing his handling of the U.S.-Mexico border situation, attempt to expand the federal moratorium on evictions, and the withdrawal of U.S. troops from Afghanistan.
CONGRESS & COURTS・1 DAY AGO
POLITICO

Many party lawmakers have waited weeks for their president, after a summer largely focused on off-Hill crises, to turn his attention to the House.
WASHINGTON, DC・22 HOURS AGO

President Joe Biden is facing a downturn with voters that could hurt Democrats in electoral races and collapse the party's congressional majority in the midterm elections, according to pollsters and strategists.
PRESIDENTIAL ELECTION・1 DAY AGO
WashingtonExaminer

US President Joe Biden met Wednesday with the warring wings of his Democratic Party in an effort to save his troubled economic plans. The White House said in a statement Biden held three "productive and candid" meetings with two dozen members of Congress, as he dives in to try and settle an internal party squabble threatening to sink his ambitious social spending and infrastructure agenda. One meeting featured the two most powerful Democrats, House Speaker Nancy Pelosi and Senate Majority Leader Chuck Schumer. Both are close Biden allies but are struggling to get their ranks in line behind the economic plans. Biden then met with a group of moderate Democrats, including senators Joe Manchin and Kyrsten Sinema, who have got cold feet about the huge price tag.
PRESIDENTIAL ELECTION・10 HOURS AGO
MSNBC

Biden may be heading for a midterm wipeout, but Republican governors in Florida and Texas may also face the ire of voters over their handling of the pandemic.
PRESIDENTIAL ELECTION・1 DAY AGO
Newsweek

The spending package includes funding to raise the government's debt limit, which the treasury secretary said is crucial to avoid a historic financial crisis.
LOUISIANA STATE・1 DAY AGO
POLITICO

“If any member of Congress is not concerned that this could fall apart, they need treatment,” said Rep. Emanuel Cleaver (D-Mo.).
CONGRESS & COURTS・1 DAY AGO
MarketWatch

House Democrats on Tuesday are planning a vote on legislation to avert a partial government shutdown and raise the U.S. debt ceiling, as Republicans say they won't help raise the borrowing limit.
PRESIDENTIAL ELECTION・1 DAY AGO

Democratic leaders plan to vote next week on a $1.2 trillion infrastructure bill they hope to send to President Joe Biden’s desk despite demands from their liberal base to postpone the legislation until Congress can pass a much larger social welfare spending measure.
CONGRESS & COURTS・1 DAY AGO
Reuters

WASHINGTON, Sept 21 (Reuters) - U.S. Senate Majority Leader Chuck Schumer signaled to Republicans on Tuesday that if they block an upcoming election reform bill, he will look for a path around the chamber's filibuster rule to try to pass it with only Democratic support. Schumer noted that Democratic Senator...
CONGRESS & COURTS・1 DAY AGO
WashingtonExaminer

There was a chance that President Joe Biden would end a streak dating back to Bill Clinton of new presidents losing control of Congress in their first two years.
PRESIDENTIAL ELECTION・2 DAYS AGO