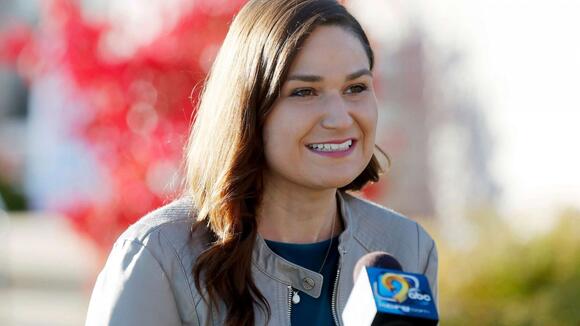 Democrat Abby Finkenauer, a one-term congresswoman who represented Iowa's 1st Congressional District until she was unseated by a Republican in 2020, announced Thursday she's running for Senate.

In her announcement video, Finkenauer, who is also a former state representative, shares the news with an intimate group of Iowans, calling out longtime fixtures of the Senate for how "obsessed" they are with maintaining power, citing their response to the Jan. 6 insurrection at the U.S. Capitol.

"The politicians who've been there for decades ... [t]hey think they own democracy, and they were silent when it was attacked. You see it's politicians like Senator Grassley and Mitch McConnell, who should know better, but are so obsessed with power that they oppose anything that moves us forward. Since the Capitol was attacked, they've turned their backs on democracy, and on us," she says. "They made their choice, and I'm making mine. I'm running for the United States Senate."

The seat Finkenauer is seeking has been held by Republican Chuck Grassley for 40 years. First elected in 1980 when Republican Ronald Reagan ascended to the White House and defeating incumbent Democrat Jimmy Carter, Grassley is the longest serving senator to ever represent the Hawkeye State.

The 87-year-old has been fundraising, earning nearly $2 million in contributions so far this cycle, according to the Federal Election Commission filing for his campaign committee submitted a week ago. But Grassley has not made his reelection bid official yet, despite the National Republican Senatorial Committee's chairman persistently "bugging" the senator to make an announcement.

However, Sen. Rick Scott, the NRSC's chairman, indicated in a podcast interview Tuesday he feels good about Grassley seeking another term, citing a fundraiser he recently held for him in Florida.

"If he flies all the way from Iowa down to Naples, Florida, I think he's gonna run," Scott said.

The Republican Party of Iowa was quick to blast Finkenauer after her announcement.

"Let me be as clear as possible - Abby Finkenauer will never represent the state of Iowa in the U.S. Senate," Chairman Jeff Kaufmann said in a statement. "Iowans know Finkenauer and her disastrous record, it's why they rejected her last November. No matter how she tries to reinvent herself, Iowans will see that her values and priorities are just the same as AOC's and Chuck Schumer's. Finkenauer will fall in line with Democrat leadership every chance she gets in hopes to gain media notoriety. ... I look forward to seeing even more Iowans reject Finkenauer once again."

In a statement, Jennifer Heins, an adviser to the Grassley Committee, accused Finkenauer of being "too radical for Iowa," saying that's why she became "the first member of Congress from Iowa to lose re-election after just one term in more than fifty years."

When Finkenauer won in 2018, she became one of the youngest members of Congress along with New York's Alexandria Ocasio-Cortez. At only 32 years old, Grassley was already serving his second Senate term when she was born.

After flipping her district from red to blue in the 2018 blue wave, the Democrat narrowly lost reelection in 2020 to Republican Ashley Hinson. Hinson won about 10,700 more votes than Finkenauer, giving her a 2.6-point lead over Finkenauer. Across the country in 2020, Republicans picked up 14 seats, not including Republican-turned independent Justin Amash's district, giving Democrats the slimmest House majority since the early 2000s.

Based on the 2020 election, Democrats are facing an uphill battle to win statewide in Iowa. The Republican in Iowa's 2nd Congressional District, Mariannette Miller-Meeks, also won her election, flipping an open seat from blue to red as well. Republican Joni Ernst fended off a challenge from Democrat Theresa Greenfield, winning reelection by a 6.6-point margin. Former President Donald Trump's margin against President Joe Biden was even bigger, 8.2 points.

But if Grassley chooses to forgo a bid, an open race could be much more competitive.

Iowans keep Red. Look at samples as NY, California (San Francisco, Los Angeles, Lông Beach...), Seattle, Oakland, Chicago.... there are, homeless, board up businesses, tax raises .... The important thing is the education. Keep your kids out of CRT, Marxism, Globalism....

Time to move on folks and take back Iowa. What have our current politicians done other than take our money.

After two years of Obiden America will be more than fed up with dimocrats. The economy will be in the tank, with gas and grocery prices thru the roof. Yeah, America will be done with the dims.

DALLAS -- A San Antonio doctor who said he performed an abortion in defiance of a new Texas law all but dared supporters of the state's near-total ban on the procedure to try making an early example of him by filing a lawsuit — and by Monday, two people obliged.
TEXAS STATE・2 HOURS AGO
Reuters

WASHINGTON, Sept 20 (Reuters) - President Joe Biden's administration wants to nearly double the number of refugees admitted to the United States to 125,000 in the upcoming fiscal year starting on Oct. 1 in keeping with a campaign promise, according to a statement from the State Department. The State Department...
POTUS・5 HOURS AGO
ABC News

Two people are being treated for gunshot wounds following a shooting at Heritage High School in Newport News, Virginia, according to police. Their injuries are not considered life-threatening and a suspect was in custody later in the day, investigators said. Students at the high school were evacuated and sent to...
VIRGINIA STATE・8 HOURS AGO
ABC News

MOSCOW -- Russia’s ruling party, United Russia, which backs President Vladimir Putin, has kept its supermajority in the country’s parliament, sweeping elections that were marred with allegations of widespread ballot rigging and saw many of the Kremlin’s top opponents barred from running. With virtually all ballots counted, Russia’s election’s commission...
PRESIDENTIAL ELECTION・6 HOURS AGO

Brian Laundrie, Gabby Petito's fiancé, has been missing for a week. Here's why it's been so hard to find him

(CNN) — Brian Laundrie, the fiancé of Gabby Petito, has been missing for almost a week. His disappearance comes after he and Petito embarked on a cross-country trip in June, only for him to return alone in September. The search for Petito has made national headlines with daily developments, and Laundrie's disappearance has only added to the confusion.
NORTH PORT, FL・59 MINUTES AGO
The Hill

Democrats are rejecting calls to overrule the Senate parliamentarian despite the bleak reality that, absent a breakthrough, they likely won't be able to get a pathway to citizenship for millions of immigrants to President Biden 's desk given her unfavorable ruling. Senate Parliamentarian Elizabeth MacDonough’s decision that the immigration plan...
CONGRESS & COURTS・5 HOURS AGO
The Associated Press

Pfizer said Monday its COVID-19 vaccine works for children ages 5 to 11 and that it will seek U.S. authorization for this age group soon — a key step toward beginning vaccinations for youngsters. The vaccine made by Pfizer and its German partner BioNTech already is available for anyone 12...
PUBLIC HEALTH・16 HOURS AGO
The Associated Press

NORTH PORT, Fla. (AP) — FBI agents and police Monday searched the home of the boyfriend wanted for questioning in the death of 22-year-old Gabby Petito, whose body was discovered over the weekend at a Wyoming national park months after the couple set out on a cross-country road trip. The...
FLORIDA STATE・7 HOURS AGO

‘Crisis of trust’: France bristles at US submarine deal

UNITED NATIONS (AP) — France’s top diplomat declared Monday that there is a “crisis of trust” in the United States after a Pacific defense deal stung France and left Europe wondering about its longtime ally across the Atlantic. France canceled meetings with British and Australian officials and worked to rally...
MILITARY・13 HOURS AGO
CBS News