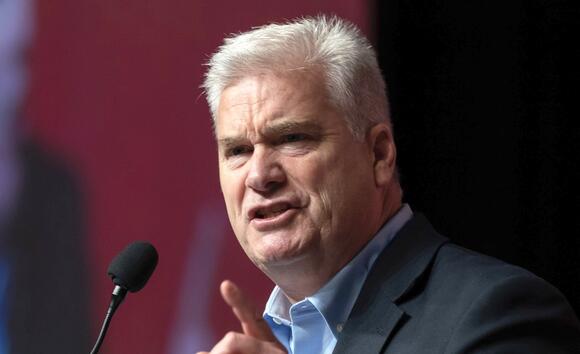 Top Republicans say inflation fears, rising crime, and lax border security are developing into a voter backlash against President Joe Biden that is poised to deliver the House majority to the GOP in the 2022 midterm elections.

In fresh polling from the National Republican Congressional Committee, “seven out of 10 voters in battleground districts express high levels of concern about rising prices and the higher cost of living. … Voters in these battleground districts trust Republicans over Democrats in Congress to deal with crime and public safety,” while independents and Hispanics disapprove of Biden’s handling of the “border crisis” by 23 percentage points. The NRCC polled 85 battleground House districts July 8–15.

“Democrats are the party of 'defund the police,' and the voters know it,” said Rep. Tom Emmer of Minnesota, the NRCC chairman, during a Thursday morning video news conference with reporters. How confident is Emmer? More than a year before the general election, he is declaring some veteran Democratic incumbents defeated.

“Ron Kind in Wisconsin’s 3rd Congressional District — he’s not coming back,” Emmer said. “If he chooses to run for reelection, he’s going to lose.” Kind, a Democrat, has been in office for more than two decades and managed to survive amid Wisconsin’s competitive political environment.

Some Democrats on the Left are big proponents of reducing taxpayer funding for local law enforcement. Republicans believe this issue is a winner as the midterm elections approach, especially with polling showing that anxiety over rising crime is resonating with voters, although Biden continues to state his opposition to defunding the police and, during a televised town hall meeting on CNN on Wednesday evening, said more police officers should be on the beat, not less.

House Democrats won the majority in a 40-seat swing in 2018 in a rebuke of former President Donald Trump driven by suburban discontent. Two years later, Republicans flipped 14 Democrat-held districts, putting them five seats short of the majority heading into 2022, Biden’s first. Historically, the party out of power in the White House picks up seats in the midterm elections. The decennial redistricting process also is expected to boost Republicans.

Emmer said the NRCC is targeting 58 districts that either backed Trump last year or narrowly supported Biden, plus others. Additional findings from the NRCC’s survey of key House districts include:

Will he is definitely better then that Orange SOB Trump. That couldn't tell the truth if his life depended on it........Blue all the way

There was a chance that President Joe Biden would end a streak dating back to Bill Clinton of new presidents losing control of Congress in their first two years.
PRESIDENTIAL ELECTION・9 HOURS AGO
The Independent

Joe Biden was again accused of lacking stamina and of being too old to be US president by a Fox News contributor as he rode a bicycle during a weekend break at home in Delaware.Mr Biden, who was filmed riding a bicycle despite being 78-years-old, was accused by TV personality Rachel Campos-Duffy of failing to have the “stamina” to be “leader of the free world” during an interview on Monday with host Harris Faulkner.Although images of an active president appeared to show otherwise, she told viewers that "Being the leader of the free world has to be the most demanding...
PRESIDENTIAL ELECTION・4 HOURS AGO
Newsweek

"If we relitigate 2020 over and over again, it won't change the result in 2020, but we are sure to lose in 2024," said the Louisiana Republican.
PRESIDENTIAL ELECTION・23 HOURS AGO
Newsweek

Who Is the Senate Parliamentarian? How an Unelected Official Is Influencing Biden's Agenda

The parliamentarian advised that a provision to provide a pathway to citizenship for millions of immigrants can't be included in budget reconciliation.
CONGRESS & COURTS・6 HOURS AGO

Republican AGs urge Biden administration to give up on vaccine requirements

WASHINGTON — More than 20 Republican state attorneys general are threatening to sue the Biden administration over its mandate that large employers require their employees to either be vaccinated against the coronavirus or undergo weekly testing. In a Thursday letter, the 24 AGs pushed the administration to remove the requirement that would affect nearly 80 million […] The post Republican AGs urge Biden administration to give up on vaccine requirements appeared first on Ohio Capital Journal.
U.S. POLITICS・19 HOURS AGO
The Guardian

One of the seven Republican senators who voted to convict Donald Trump at his second impeachment trial warned on Sunday that the former president’s “bullying” of the party would lead to electoral defeat in next year’s midterms and beyond. Bill Cassidy of Louisiana was speaking days after the Ohio Republican...
NFL・1 DAY AGO
The Independent

Congress must fund the government in the next 10 days, or risk a federal shutdown. Raise the nation’s borrowing limit, or default on its debt. All this while lawmakers are laboring to shoulder President Joe Biden’s massive $3.5 trillion “build back better” agenda through the House and Senate The magnitude of the challenges ahead and the speed required to accomplish the job is like nothing Congress has faced in recent memory, situating Biden’s entire domestic agenda and the political fate of his Democratic party at a crucial moment.The Republicans have made it clear they will not be helping...
PRESIDENTIAL ELECTION・4 HOURS AGO

Eighteen months into the COVID-19 pandemic, would you say you’re so completely over this shit? And that you’re thoroughly pissed? Pissed at the people who are to blame for us still having to worry about school closures and positive cases and whether or not we’ll have to spend the holidays away from our families again this year, i.e. the people who refuse to get vaccinated and the public officials doing literally everything in their power to keep this virus going for who knows how long? You’re not alone!
PRESIDENTIAL ELECTION・3 DAYS AGO
Business Insider

President Joe Biden’s verbal stumbles and his team’s moves to cut off TV feeds while he’s talking have voters already thinking Vice President Kamala Harris will replace him as president before the 2024 presidential election.
PRESIDENTIAL ELECTION・4 DAYS AGO

Why Biden Bet It All on Mandates

When President Joe Biden rolled out his plan requiring vaccinations on a mass scale, he sounded a bit like a gambler at a point of desperation. Biden’s presidency, and much of his legacy, hinges on defeating the prolonged pandemic. During a dismal summer of rising infections and deaths due to vaccine holdouts and the Delta variant, the pandemic seemed to have defeated him. Under the new rules, Biden hopes to pressure about 80 million more Americans to get their shots. It’s a political risk that opens him up to Republican attacks that he’s intruding on peoples’ freedoms, ahead of midterm elections that could easily strip the Democrats of their congressional majority. Biden gets this. He’s all in, win or lose.
PRESIDENTIAL ELECTION・1 DAY AGO
WashingtonExaminer

"The Republican Party will not get better unless you stand up," the congressman said in a message to fellow GOP lawmakers on Saturday.
PRESIDENTIAL ELECTION・2 DAYS AGO
AFP

US lawmakers will dive into the busiest legislative period in years in the coming week, with President Joe Biden counting on a united front from Democrats to pass make-or-break spending bills that he hopes will improve his sagging approval ratings. Facing stinging criticism over the chaotic US withdrawal from Afghanistan and a stubbornly elevated pandemic death toll, Biden is banking on going into next year's midterm elections with historic economic reforms under his belt. Avoiding a government shutdown is also at the top of the agenda, alongside dodging a catastrophic credit default, which may be the largest of the looming deadlines.
CONGRESS & COURTS・1 DAY AGO

"Mr. President, your vaccination mandate represents not only a threat to individual liberty, but a public health disaster," the letter says.
PUBLIC HEALTH・3 DAYS AGO
Newsweek

Trump reportedly knew Pence had no plans to send the election results back to states before he addressed his supporters on January 6 but continued the pressure.
PRESIDENTIAL ELECTION・3 DAYS AGO
Fortune

Subscribe to Fortune Daily to get essential business stories straight to your inbox each morning. The White House is warning state and local governments about severe cuts to disaster relief, Medicaid, infrastructure grants, school money and other programs if Congress fails to raise the U.S. debt limit. A fact sheet...
POTUS・3 DAYS AGO
WashingtonExaminer

Former President Donald Trump attacked a retiring House Republican on Friday and touted his endorsement of a primary rival in the district as the cause.
POTUS・3 DAYS AGO