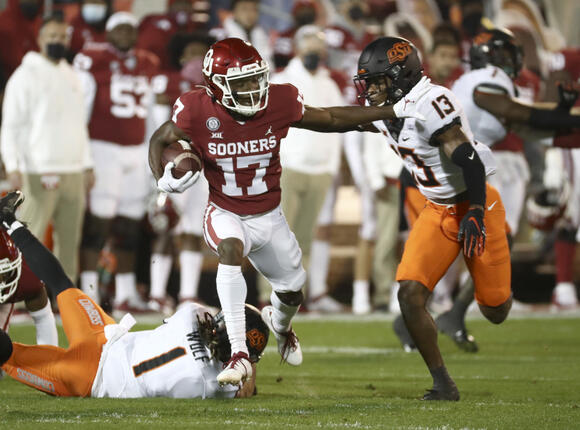 The preseason honors keep rolling in for the Oklahoma Sooners.

A pair of OU wide outs, Marvin Mims and Mike Woods, have been named to the Biletnikoff Award watch list.

Handed out every year, the Biletnikoff Award is given to the nation’s top receiver.

Last year, Mims led the Sooners with 610 yards and nine touchdowns on 37 receptions. The nine touchdowns set a new program record for a freshman, as Mims looks to improve on those marks in his upcoming sophomore season.

Woods, a transfer from Arkansas, hauled in 32 catches for 619 yards and five scores last year for the Razorbacks. Before making the decision to head to Oklahoma, Woods was projected as one of the most explosive receivers returning to the SEC headed into the 2021 season.

Dede Westbrook is the only OU receiver to ever win the Biletnikoff, as he brought the award back to Norman in 2016.

History aside, this doesn’t need to be an entertaining game. Nebraska isn’t good. Oklahoma is a 23-point favorite for a reason. But the fact is that Nebraska has better players than Tulane, and Tulane almost beat OU in Norman two weeks ago. Maybe that got the Sooners’ attention. Maybe they just needed a wake-up call to start the season, for some reason. If both teams play their best, OU wins in a rout. But if Oklahoma somehow takes the Cornhuskers lightly — if the Sooners’ mental approach is off again, or if they’re buying into the hype again — it’ll be a game late. With a scoot-around quarterback like Taylor Martinez and athletes like Markese Stepp and Samori Tuore, that could get interesting. OU needs to win in the trenches or it’ll be closer than they want.
NORMAN, OK・3 HOURS AGO
AllSooners

The game that Joe Castiglione has nurtured for almost a decade has come to fruition. The brainchild of his years of planning is here. And yet, Oklahoma-Nebraska is both greater than and less than just one nostalgic non-conference game. On one hand, the 2021 version of OU-Nebraska represents a taste...
COLLEGE SPORTS・14 HOURS AGO
AllSooners

With the USC head coaching job opening up, a great offseason conversation starter has returned to the forefront of college football. Which school has the most attractive head coaching job in the country? Subscribe for full article.
OKLAHOMA STATE・3 HOURS AGO
AllSooners

Johnny Rodgers thinks he’s figured out why Nebraska football did so well for so long. “We would rather slide bare-ass on a razor blade,” Rodgers told SI Sooners, “than disappoint Coach (Bob) Devaney and Tom Osborne.”. Starting in 1963, Devaney’s second year in Lincoln, the Cornhuskers won the Big Eight...
NFL・11 HOURS AGO

In years past, the Oklahoma secondary couldn’t afford many injuries, lacking the depth to lose a starter and compete at a high level. But Saturday will provide a barometer for defensive coordinator Alex Grinch’s unit. When the No. 3-ranked Sooners take the field against the Nebraska Cornhuskers for the first...
OKLAHOMA STATE・1 DAY AGO
AllSooners

Lincoln Riley Says Oklahoma Injuries vs. Nebraska Could Go 'Down to the Wire'

Oklahoma coach Lincoln Riley was still unable to update his team’s injury status during a quick interview on Thursday. “Yeah, nothing, yet,” Riley said. Riley said Tuesday that wide receiver Brian Darby would miss this week’s game against Nebraska and that cornerback Woodi Washington. He also said “a handful” of other players would be questionable to play against the Cornhuskers.
OKLAHOMA STATE・1 DAY AGO
AllSooners

NORMAN — In a seven-day span, Oklahoma goes from facing Western Carolina to facing Nebraska. Is that enough time for the Sooners to adjust to playing against better athletes — bigger, stronger, faster — and more of them?. It will have to be. The schedule is the schedule. But OU...
NEBRASKA STATE・2 DAYS AGO
AllSooners

With all the attention currently on Oklahoma football, Wednesday offered something for Sooner basketball fans to sink their teeth into as the first year under new head coach Porter Moser draws nearer. The Big 12 conference released the 2021-2022 schedule this afternoon with Oklahoma tipping things off at home against...
OKLAHOMA STATE・2 DAYS AGO

Watch Oklahoma linebacker Caleb Kelly's full media zoom call from Wednesday, Sept. 15 as he talks the latest with the Sooners and previews their matchup with the Nebraska Cornhuskers on Saturday. Want to join the discussion? Click here to become a member of the AllSooners message board community today!. Sign...
OKLAHOMA STATE・2 DAYS AGO
AllSooners

Watch Oklahoma linebacker DaShaun White's full media zoom call from Wednesday, Sept. 15 as he talks the latest with the Sooners and previews their matchup with the Nebraska Cornhuskers on Saturday. Want to join the discussion? Click here to become a member of the AllSooners message board community today!. Sign...
OKLAHOMA STATE・2 DAYS AGO
AllSooners

Oklahoma's Interior Pass Rush Could be the Key to Slowing Nebraska

Nebraska’s offense should look familiar on Saturday. When the Oklahoma Sooners and the Cornhuskers renew their rivalry inside Gaylord Family - Oklahoma Memorial Stadium, a mobile Martinez will be at the helm of the ‘Husker attack. This one Adrian Martinez, not Taylor, also excels at attacking defenses both through the...
NEBRASKA STATE・2 DAYS AGO
AllSooners

Watch Oklahoma tight end/h-back Jeremiah Hall's full media zoom call from Wednesday, Sept. 15 as he talks the latest with the Sooners and previews their matchup with the Nebraska Cornhuskers on Saturday. Want to join the discussion? Click here to become a member of the AllSooners message board community today!
OKLAHOMA STATE・2 DAYS AGO

Lincoln Log: OU Striving to Maintain Focus and Lean on Brooks vs. 'Huskers

NORMAN- Oklahoma-Nebraska week is finally here. On Tuesday, OU head coach Lincoln Riley said he and the coaches have taken some time with the team to educate them on the history of the rivalry, but under the strict time constraints of college football the focus still has to be preforming well on Saturday.
COLLEGE SPORTS・3 DAYS AGO
AllSooners

Oklahoma's '21 Freshmen Class, Challenged Like No Other, Have Exceeded Expectations So Far

NORMAN — After two games, the bottom line is that there is something special about Oklahoma’s 2021 freshman class. Good football players, yes, as evidenced by the number of first-year players already in the Sooners’ lineup. The future, to be sure, looks bright. But OU coach Lincoln Riley thinks it...
OKLAHOMA STATE・3 DAYS AGO
AllSooners

NORMAN — Oklahoma coach Lincoln Riley hopes his players have a good grasp of the historical perspective about this week’s renewal of the Big Red Rivalry between Oklahoma and Nebraska. But not too good. “I’m kind of on the clock,” Riley said Tuesday at his weekly press conference. “I can’t...
OKLAHOMA STATE・3 DAYS AGO
AllSooners

Oklahoma Sooners running back Eric Gray meets the press on a Zoom conference on Tuesday, Sept. 14, 2021.
NFL・3 DAYS AGO
AllSooners

Raiders Gerald McCoy Out for the Season

Watch as Oklahoma defensive lineman Reggie Grimes speaks with the media ahead of Saturday's matchup with the Nebraska Cornhuskers. Want to join the discussion? Click here to become a member of the AllSooners message board community today!. Sign up for your premium membership to AllSooners.com today, and get access to...
OKLAHOMA STATE・3 DAYS AGO
AllSooners

OU-Nebraska Will be a Spectacle for the Fans, Just Not the Players Involved

Saturday morning, a classic college football rivalry will renew. The Oklahoma Sooners and the Nebraska Cornhuskers will meet for the 87th time, but the contest is now just a spectacle for the fans, not an intense battle with hatred flowing on each side line. In fact, almost none of the...
COLLEGE SPORTS・4 DAYS AGO