21-year-old reality star Lauryn "Pumpkin" Shannon is a parent to baby number two. She and her husband, Joshua Efird, are excited to share the good news with their fans in cuddly photos.

Reality star Lauryn "Pumpkin" Shannon and her husband of three years, Joshua Efird, announced the arrival of their baby on Shannon's Instagram. The two are already parents to daughter Ella Grace, 3.

Shannon said that she was admitted to the hospital during the night with heavy contractions. They welcomed their baby, Bentley Jameson Efird, at 7 pounds and 10 ounces. 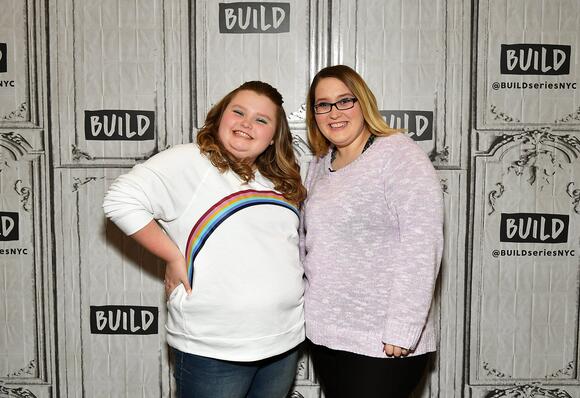 The photos showed the new baby wrapped up in a blanket held close to his mom's chest, while another showed the proud father looking his son in the eyes, with the newborn still wrapped in the hospital blanket.

Their fans on Instagram were excited about the news and went to the comment section to welcome the little boy and congratulate the new parents on the birth of their new baby.

Others gushed over the heartwarming photos noting the resemblance between father and son, while others filled the comments with love hearts. One comment read:

"He looks like his daddy...Congratulations to you and your family!"

Others could not wait to see the bond that new baby Bentley creates with his older sister, Ella, who fans had seen grow right before their eyes as she made appearances on the family's reality shows.

Just as they've done with the birth of their baby boy, the new parents also posted numerous photos when Ella was born. She'd arrived at 5:00 am and weighed 7 pounds and 14 ounces, just slightly heavier than her brother.

One of the photos featured baby Ella held in front of a whiteboard with a welcoming message written on it. The fans have gotten to see the little girl grow over the years and have now experienced the welcoming of her baby brother.

She admits to having chosen the wrong path but is proud of herself for turning her life around and getting clean.

The Shannon family became famous from the reality show " Here Comes Honey Boo Boo," a spin-off of the much-famed show "Toddlers and Tiaras."

The family matriarch, Mama June, who had been dealing with weight problems for years, documented her weight loss journey in the show "Mama June: From Not to Hot" and lost up to 300 pounds through a weight loss surgery.

She was able to go from size 18 to size 4, but these newfound body goals came with an array of challenges when Mama June spiraled into gambling and drugs. In 2019, the reality star was arrested for possession of cocaine.

Mama June made a shocking revelation that at the peak of her addiction, she and her boyfriend, Geno Doak, had spent close to $1 million on crack cocaine. In an interview with E News in March, Mama June says:

"I'm just constantly trying to make amends. Right now, I have to worry about my recovery."

These legal problems have seen the 41-year-old lose touch with her relationship with her daughters, and for a long time, she and Chickadee have not seen eye to eye.

Mama June is, however, making amends, and in June, the mother of 4 was finally able to reunite with her four daughters, Alana Thompson,15, Lauryn Efrid, 21, Jessica Shannon, 24, and Anna Cardwell, 26.

The mother and daughters are repairing their broken relationship after six years of not reuniting with her girls. And for Mothers Day, Shannon thanked her mom for everything she has done for them.

She says that despite the curveball life has thrown them, she was still their mother, and she was glad that Mama June was finally fighting off her addiction and thanked her for being a wonderful grandma to her babies.

Mama June is now almost 17 months sober and is keen to keep her sobriety journey going. She admits to having chosen the wrong path but is proud of herself for turning her life around and getting clean.

After having three kids, Beyonce is in the best and most enviable shape. She recently flaunted her killer curves, rocking a spaghetti strap playsuit during her Europe gateway with her family. See how adorable they look. Award-winning singer Beyonce, and her rapper/music executive husband, Jay Z, have contributed immensely to...
BEAUTY & FASHION・2 DAYS AGO
Amomama

Luenell Campbell has won many hearts with her comedic and acting skills. However, her love for her husband constantly melts hearts and appears to be her topmost priority. Luenell Campbell is popularly known as an American actress, comedian, and writer. She has landed several roles, however, she is mostly famous for appearing in the movies "The Rock," "A Star Is Born," and "That's My Boy."
RELATIONSHIPS・2 DAYS AGO
Amomama

One day, I refused to pay for her trip and told her to ask her “real dad” for money. No doubt, I did right! She had learned a priceless lesson. “You’re not my real dad. You’ve never been! So stop acting like that!” Lara lashed out at me when I inquired why she returned home so late.
FAMILY RELATIONSHIPS・1 DAY AGO
Amomama

Famous actress Angela Robinson recently shared a lovely snap of her little boy on his first day of pre-school, and fans could not help but gush over his sweet looks, especially his afro hair. Motherhood means a lot to “The Haves & the Have Nots” star Angela Robinson, and a...
CELEBRITIES・14 HOURS AGO

HGTV star Carmeon Hamilton is mourning the death of her husband, Marcus. Hamilton, who was crowned the champion of "Design Star: Next Gen" in March, posted a heartbreaking tribute to her late husband Sunday on Instagram, revealing that he'd died from injuries he sustained in a motorcycle accident the day before.
CELEBRITIES・17 DAYS AGO
Life and Style Weekly

Halsey is revealing that they felt “shame” from others for getting pregnant while young and unmarried, especially when their career is so hot. “I’m 26, and I tried very hard for this pregnancy, and it was like, I’m financially independent, I’m pretty far along in my career, it feels like the right time for me to do it,” Halsey, who is a new mom to baby Ender with boyfriend Alev Aydin, told Zane Lowe during a recent interview on Apple Music 1.
CELEBRITIES・20 DAYS AGO
Popculture

Teen Mom OG star Maci Bookout is giving an update on her son Bentley's strained relationship with his dad, Ryan Edwards. Bookout, 30, told Us Weekly that Bentley, 12, has seen Edwards only "a couple of times this year" and that, "To be quite honest, Ryan doesn't show up to any baseball games or anything like that. It's not shocking that he doesn't see him that much."
RELATIONSHIPS・13 DAYS AGO
Popculture

'Teen Mom 2': Chelsea Houska's Daughter Is Beyond Cute as She Turns 7 Months Old

Teen Mom 2 alum Chelsea Houska just brought a major dose of cuteness to Instagram with a little help from her youngest, her seven-month-old daughter Walker. On Wednesday, Houska posted a couple of photos of Walker to mark her seven-month birthday. Houska gave birth to Walker, her fourth child, in January. She shares Walker with her husband, Cole DeBoer.
CELEBRITIES・8 DAYS AGO

TEEN Mom OG star Tyler Baltierra shared a collage comparing all four of his daughters with wife Catelynn Lowell as newborns. The couple welcomed their fourth daughter, Rya Rose, in August. Tyler, 29, took to his Instagram Story on Thursday to share photos of the couple’s daughters as newborns. In...
FAMILY RELATIONSHIPS・7 DAYS AGO
People

90 Day Fiance's Loren and Alexei Brovarnik Reveal Name of Second Baby: 'And Then There Were 4!'

Nearly one month after welcoming their second baby together, another son, 90 Day Fiancé stars Loren and Alexei Brovarnik revealed the name of their baby boy. Loren shared her son's moniker on Instagram Sunday alongside a sweet photo of the family, which also includes their 16-month-old son Shai Josef. "And...
FAMILY RELATIONSHIPS・3 DAYS AGO
Amomama

American actress Tia Mowry posted a picture of her and her tall son, Cree, on Instagram, showing off their unique bond and the uncanny resemblance they shared, and fans had a lot to say about the image. Tia Mowry Hardrict is a talented actress who first gained recognition after being...
CELEBRITIES・19 DAYS AGO
bravotv.com

Pregnant Briana Culberson Reveals Baby No. 4 Will Be a Girl

It'll be a girl for Briana Culberson! The Real Housewives of Orange County alum will be welcoming a daughter this March. The happy news was shared on Instagram on September 8 in a post that featured two photos from the moment the family revealed the sex of their fourth child.
FAMILY RELATIONSHIPS・7 DAYS AGO

Nia Long, who starred as Bird in "Soul Food," may not be married, but she is enjoying her time with her longtime lover and the father of her second son. See how they look adorable while posing side by side during their time at the US Open. "Soul Food" star...
CELEBRITIES・2 DAYS AGO
Popculture

I Love a Mama's Boy star Matt is at a crossroads in his relationship with fiancée Kim after she received a job offer that could take her to Texas - and he's not willing to leave his mother. In a PopCulture exclusive sneak peek of Sunday's all-new episode of the TLC show, Kim learns just how opposed Matt is for this next step in her career.
CELEBRITIES・6 DAYS AGO
The Hollywood Gossip

Mama June Shannon's rumored romance with a 24-year-old boy toy TikTok star has been turning heads. In fact, her family has commented on the arrangement, citing their concerns that this is a threat to her sobriety -- and her finances. June is clapping back, however. She's also denying almost everything.
CELEBRITIES・14 DAYS AGO
centralrecorder.com

New parents love to document every cute moment of their baby’s life. Mykelti Padron’s five-month-old daughter Avalon is no exception. She loves to share updates about Avalon as she grows and develops. Fans have been following Mykelti since 2010. They eat every minute of it. But babies can be unpredictable...
FAMILY RELATIONSHIPS・2 DAYS AGO
Insider

Cardi B and Offset have welcomed their 2nd child together, a baby boy

Iconic singer Ron Isley looks nearly unrecognizable as he defies his age posing in two-piece Versace clothing next to his chic and much younger wife, Kandy. Legendary performer Ron Isley and founder of the "The Isley Brothers" group, has been long in the game. His experience is as far back as five decades ago when he and his band members rendered heart-melting performances on stage.
CELEBRITIES・1 DAY AGO
Amomama

Notorious B.I.G's only daughter is now a grown woman ready to venture into motherhood. See how she flaunts her baby bump while rocking a black dress at her baby shower and gender reveal. Notorious B.I.G's legacy and achievements remain unbeatable. The famous rapper was able to gain respect with his...
CELEBRITIES・3 DAYS AGO
Amomama

Jeannie Mai and her husband Jeezy are one of the most lovely pairs in the world of celebrity couples, and during their outing at the recent New York Fashion Week, the couple stole the spotlight. The New York Fashion Week is the much-awaited time for celebrities to flaunt their creativity...
NEW YORK CITY, NY・1 DAY AGO