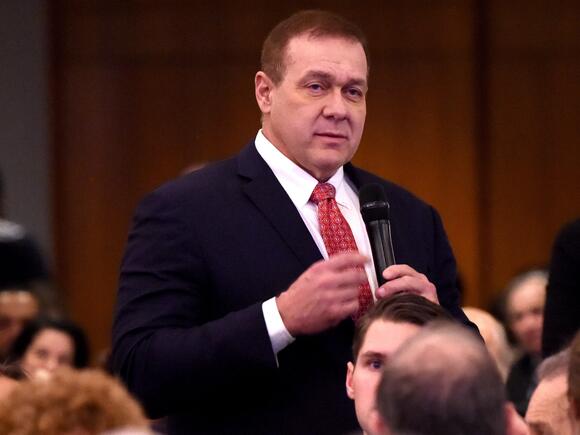 US equities could drop 15% by the end of October, driven lower by concern over the delta variant of COVID-19 and its impact on global growth, while cryptocurrencies could continue to face pressure, according to Guggenheim's Scott Minerd.

The chief investment officer told Bloomberg on Wednesday that September and October are likely to be "very rough" months for stocks.

"Maybe a pullback of 15% or slightly more," he said, adding that investors could get back into buying by the end of autumn.

Stock prices and bond yields recently fell sharply as growth fears sparked by the fast-spreading delta variant dented some of the market optimism. The Dow Jones slumped 2.1% at the start of the week in its biggest one-day drop since October, but stocks have slowly been clawing back gains.

That said, the benchmark US stock indices have all hit record highs this month and are not trading far below those levels. The S&P 500 hit a record 4,393.68 on July 14 and closed about 1% below that level on Tuesday.

Wall Street can expect a rise in volatility over the next few months, as the Federal Reserve could taper its asset purchases sooner than expected if pressure grows for the central bank to start to normalize interest rates, according to Minerd. He expects Treasury yields to decline by as much as 60 basis points if markets believe the economy will weaken. A drop of that size would take the 10-year Treasury note yield to its lowest since October.

For cryptocurrencies, July was the third consecutive month of negative returns. Minerd expects them to stay challenged in the near-term.

Minerd reiterated a $15,000 price prediction for bitcoin , a 53% decline from Thursday's price of $32,190, and said "a lot of this stuff is just junk." Still, he called ether a more viable currency than bitcoin.

"I think there's still more air to come out," he said. "The standard bear market for bitcoin has been an 80% retracement, and given all the uncertainty and the new competition from new coins, I think there's more downside to go."

Buying bitcoin anytime soon isn't a good idea, according to him. He has previously compared cryptocurrencies to the 17th century tulip bubble . After pulling back significantly, Minerd has said he expects bitcoin to eventually rise to as much as $600,000 per coin.

Read More: The head economist at a blockchain fintech firm names 2 of the most promising crypto SPAC deals on his radar - and explains why blank-check companies can be better alternatives to buying cryptocurrencies

Stocks opened mostly lower Monday, with the rate-sensitive tech and communication services sectors under pressure as Treasury yields continued to rise. The Dow Jones Industrial Average was up 89 points, or 0.3%, at 34,887, while the S&P 500 fell 0.2% to 4,447. The Nasdaq Composite shed 0.6% to 14,955. Treasury yields extended a rise that followed last week's Federal Reserve policy meeting, with the rate on the 10-year note briefly topping 1.5%. The 10-year yield remains up 3.3 basis points at 1.493%. Yields and debt prices move in opposite directions.
STOCKS・22 HOURS AGO
24/7 Wall St.

Just because the U.S. government has avoided defaulting on its debt over the past couple of decades doesn't mean that it could never default. At the very least, some federal contractors might not get paid.
STOCKS・19 HOURS AGO
MarketWatch

Shares of Acceleron Pharma Inc. gained 3.9% in premarket trading on Monday after Bloomberg reported Friday that an unnamed buyer is considering spending $11 billion to buy the company. Acceleron markets one approved therapy, Reblozy, which is used to treat anemia in some people with the blood disorder beta thalassemia. The company's stock has gained 31.0% so far this year, while the broader S&P 500 is up 18.6%.
STOCKS・22 HOURS AGO
Markets Insider

An upside surprise for stocks is brewing as historical trends show the S&P 500 is on track to buck analysts' gloomy forecasts, DataTrek says

"We can't think of a time when analysts have so seriously underestimated US corporate earnings power in any given year," DataTrek said.
STOCKS・21 HOURS AGO

Gold futures eke out a modest gain on Monday, for a second session in a row, as Treasury yields strengthen but ease off the day's highs.
BUSINESS・17 HOURS AGO
Markets Insider

Investors should buy any dip in the market as declining COVID-19 cases spur fresh gains for stocks, JPMorgan says

"We now think that the delta wave has likely peaked and is now receding in the US and globally," JPMorgan said.
STOCKS・16 HOURS AGO
Markets Insider

US stocks mixed as worries about a debt-ceiling standoff, Evergrande risks persist

Markets will be watching for budget votes set for Thursday on Capitol Hill.
STOCKS・22 HOURS AGO
MarketWatch

Treasury yields rose across the board on Monday, with the 30-year long bond hovering near the psychologically significant level at 2% and the benchmark 10-year note hitting the highest level since June.
MARKETS・15 HOURS AGO
MarketWatch

Shares of Altice USA are off 5.7% in Monday trading after analysts at Credit Suisse and Raymond James downgraded the stock. Credit Suisse analyst Doug Mitchelson wrote that he has concerns about the company, even though the stock is "trading well below its likely asset value" and management is being more aggressive with its fiber buildouts. "[W]e have been wrong on Altice's current broadband competitiveness and near-to-mid term growth outlook, and expect management's new investment strategy (to be detailed with 3Q21 earnings) will take at least several quarters, if not longer, to begin bearing fruit," he wrote, while lowering his rating to neutral from outperform and reducing his target price to $24 from $46. Raymond James analyst Frank Louthan IV also took a more cautious view on the stock, "following recent management commentary detailing broadband adds pressure and the strategic shift toward heavier investment and away from buybacks," which he said "were a key part of the value proposition for ATUS shareholders" Louthan downgraded the stock to market perform from outperform. Altice shares have lost 44% over the past three months as the S&P 500 has added about 4%.
STOCKS・18 HOURS AGO
MarketWatch

"We reaffirm our tactical pro-risk stance'' even though the path for further gains in risk assets has narrowed, Boivin, head of the BlackRock Investment Institute, and others wrote in a note.
MARKETS・17 HOURS AGO
AFP

Two senior Federal Reserve officials who recently drew intense criticism for their stock trading will retire in the coming week, they announced Monday, although only one mentioned the controversy. The two officials engaged in large stock trades in 2020, at a time when the Federal Reserve was aggressively acting to support the US economy amid the impact of the Covid-19 pandemic, according to financial disclosures first reported by The Wall Street Journal.
MARKETS・14 HOURS AGO
MarketWatch

The Dow Jones Industrial Average finished higher Monday, but the index managed to notch a fourth straight session of gains, but the blue-chip index ended well off the best levels of the session and the S&P 500 and Nasdaq Composite closed lower. Notably, small-capitalization stocks advanced sharply on the session, aided by a gain in energy shares which themselves were helped by a rally in crude-oil prices , rising to the highest level in about three years. The Dow closed about 71 points, or 0.2%, higher at 34,870, but ended well off its intraday peak at 35,061.12. The fourth straight session for blue chips matched its longest string of gains since the period ended Aug. 25. The S&P 500 index ended off 0.3% at 4,443, while the Nasdaq Composite Index finished the session down 0.5% at 14,970, on a preliminary basis. Meanwhile, the small-cap Russell 2000 index rose over 1% on the session. The moves for stocks came as the benchmark 10-year Treasury note touched 1.5%, its highest level since June, while the 30-year Treasury bond yield rose above 2%, marking its highest level since around mid August.
STOCKS・15 HOURS AGO
AFP

European stock markets ended the day slightly higher Monday, after an early rally ran out of steam as the prospect of drawn-out coalition talks in Germany weighed on sentiment. On the other side of the Atlantic, share prices on Wall Street were also mixed as investors weigh the risk of a US government shutdown amid difficult congressional negotiations on President Joe Biden's agenda. Brent oil prices jumped close to a three-year high just short of $80 a barrel on concerns about tightening supplies, boosting shares in energy companies. After earlier surging by as much as 0.5 percent, the blue-chip DAX index in Frankfurt ended the day 0.3 percent higher.
MARKETS・14 HOURS AGO
MarketWatch

China’s central bank declared on Friday that all transactions which involve Bitcoin and other digital currencies are illegal, thus a campaign was done to block the use of illegal digital money. The notice which was declared on Friday mentioned Bitcoin, Ethereum and any other digital money is disturbing the financial...
MARKETS・1 DAY AGO
Markets Insider

Subsiding contagion fears and some assistance from China has lured investors to buy the dip, one analyst said.
STOCKS・1 DAY AGO
Entrepreneur

We have narrowed down our search to five large-cap S&P 500 stocks that have strong growth potential for the rest of 2021. These are AZO, MOS, ULTA, OR...
STOCKS・1 DAY AGO