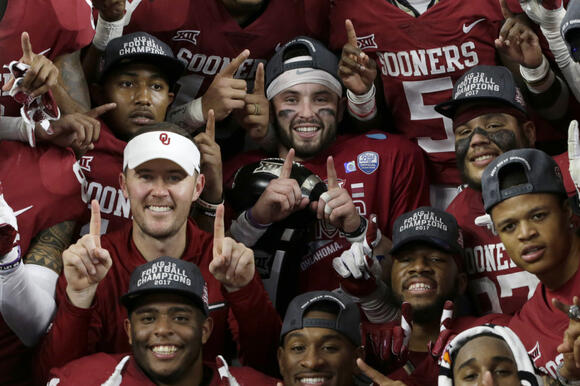 A report out of Dallas on Wednesday night supports rumors and earlier reports that Oklahoma and Texas are looking to get out of the Big 12 Conference.

Jason Whitely, senior reporter at DFW television station WFAA, tweeted that OU and Texas will send a letter to the Big 12 early next week stating that neither school intends to renew their current media contracts when they expire in 2025, and that both schools will then petition the Southeastern Conference for membership.

The Houston Chronicle reported earlier Wednesday that OU and Texas had “reached out” to the SEC about joining the league and that an announcement could be coming “within a couple of weeks.”

Oklahoma issued a tepid statement, while Oklahoma State followed suit with a more forceful sentiment, saying it would be “gravely disappointed” if the Chronicle report was true.

The Big 12’s grant-of-rights — the contract that binds members’ broadcast rights to the conference if a school leaves for another league — and its existing television rights deals expire after the 2024-25 academic year.

It seems likely, however, that if OU and Texas wanted out of the Big 12, they could make it happen sooner than 2025.

SI’s Pat Forde said on the Yahoo! Sports College Podcast last week that the Big 12 tried to initiate talks to renegotiate with its TV partners recently, but the networks declined.

While the grant-of-rights and long-term TV contracts created unity and stability back in 2012-13, the league getting shut down by its network partners may have created an environment in which big players like Oklahoma and Texas felt the need to keep an eye on the horizon.

It probably didn't help that Big 12 commissioner Bob Bowlsby last week didn't exactly express support for OU athletic director Joe Castiglione's "bitter disappointment" over the Sooners' 11 a.m. kickoff with Nebraska on Sept. 18, a commemoration of the 1971 "Game of the Century" that Castiglione has been planning for nearly a decade.

While the SEC has won the college football national championship 11 times in the last 15 years, it's also an attractive conference financially.

In May, the Big 12 announced a revenue split of $34.5 million per school, or $345 million, down for the second straight year — this time due to the COVID-19 pandemic and the loss of championships such as the NCAA basketball tournaments. The shortfall of about $50 million was also due to loss of football inventory during the 2020 season, with fewer games to broadcast. The conference also didn’t land a team in the College Football Playoff.

Times are tough at the Florida State football program right now. The Seminoles fell to 0-3 on the season with Saturday’s loss to Wake Forest. Florida State opened the season with a close loss to Notre Dame, appearing to show some improvement. However, Mike Norvell’s team was upset by Jacksonville State in Week 2 and then lost to the Demon Deacons in Week 3.
FLORIDA STATE・2 DAYS AGO
Outsider.com

Hello USC, this is Urban Meyer. About that job opening you have right now, how soon do you need me? Tonight is fine. Send the jet. College football fans were abuzz at the news of USC firing Clay Helton as their head football coach, Monday, two days after the Trojans lost to Stanford. And many pondered if Meyer, who has coached all of one game with the Jacksonville Jaguars, would be ready to ditch his brief NFL experiment and head west.
NFL・9 DAYS AGO
saturdaydownsouth.com

If Nebraska head coach Scott Frost wanted to show that he was still the man for the job at his alma mater, then the 2021 season didn’t get off to a great start. The former Cornhuskers quarterback returned to Lincoln ahead of the 2018 season as the university sought to turn the page from the Mike Riley era. So far, it hasn’t been a good return on investment as Frost has struggled to a 12-21 record, including a 9-18 mark in the Big Ten.
COLLEGE SPORTS・23 DAYS AGO
On3.com

Oklahoma Sooners athletic director Joe Castiglione has issued an apology to fans who attended Saturday’s game against Nebraska. In a Twitter post Sunday, Castiglione acknowledged the concession operations were not up to Sooner standards. “We want to acknowledge the complaints we have received about concession operations from fans attending yesterday’s...
NEBRASKA STATE・3 DAYS AGO

Tennessee will have a new starting QB Saturday, per report

Tennessee has reportedly settled in on its starting quarterback as the Volunteers take on Tennessee Tech at Neyland Stadium on Saturday. According to GoVols247 and 247Sports’ Patrick Brown, Hendon Hooker will start behind center against the Golden Eagles. Hooker will play in place of Joe Milton, who suffered a lower-body injury in the Vols’ loss to Pittsburgh on Sept. 11.
TENNESSEE STATE・4 DAYS AGO
Tuscaloosa News

At the end of Saturday morning's "SEC Nation" show from Gainesville, Tim Tebow made a bold prediction. Tebow picked a Florida Gators win against Alabama football. But he went further than just saying Florida is going to win. He said, "Alabama is coming to get a whoopin'." The Alabama vs....
ALABAMA STATE・4 DAYS AGO
The Spun

The Charleston Southern football program is dealing with the tragic death of freshman defensive lineman Lorvens Florestal, who was shot and killed early this morning. According to a release from CSU, Florestal was the victim of a random act of violence. The Delray Beach (Fla.) native was an innocent bystander, according to witnesses.
COLLEGE SPORTS・24 DAYS AGO
FanSided

You never know what you’re going to get when Mississippi State head coach Mike Leach meets with the media. Leach is known for his diatribes about anything from the woes of social media to the possible existence of Big Foot. Sometimes, between all the random talk about pirates and aliens,...
MISSISSIPPI STATE・1 DAY AGO

College football upset picks have been prosperous early with ranked teams going down, but which teams are now in danger with Oklahoma in Week 4?. Top 25 teams have been getting upset at a seemingly breakneck pace early in the 2021 college football season and that trend didn’t let up a week ago. Not only did Michigan State wax Miami, West Virginia topple Virginia Tech and Fresno State get UCLA but we also saw Ohio State, Clemson, Coastal Carolina and Oklahoma play much tighter games than expected.
OKLAHOMA STATE・9 HOURS AGO
Sports Illustrated

Check out odds, insights and more in our betting preview for the Michigan State Spartans vs. Nebraska Cornhuskers college football matchup on September 25, 2021.
MICHIGAN STATE・2 DAYS AGO
The Spun

Deion Sanders is currently the head coach at Jackson State in Mississippi. Some believe that he’ll ultimately end up in Tallahassee, leading Florida State, where he starred in college. However, could another major program hire Coach Prime before that?. FOX announcer Gus Johnson said on Sunday afternoon that he’s heard...
COLLEGE SPORTS・3 DAYS AGO
Sports Illustrated

Check out odds, insights and more in our betting preview for the Georgia Bulldogs vs. Vanderbilt Commodores college football matchup on September 25, 2021.
GEORGIA STATE・2 DAYS AGO

Over the weekend, the Alabama Crimson Tide kept its undefeated season alive with a close 31-29 win over the Florida Gators. Nick Saban and company survived after Florida’s late two-point conversion – which would have tied the game – failed. Elsewhere in the SEC, the Georgia Bulldogs routed the South Carolina Gamecocks by a final score of 40-13.
ALABAMA STATE・16 HOURS AGO
saturdaydownsouth.com

USC’s decision to fire Clay Helton after just 2 games means some college football coaches will have distractions to deal with this season, as who will be the next Trojans’ head coach is a hot topic of conversation. SEC analyst and radio personality Paul Finebaum was recently asked on the...
COLLEGE SPORTS・15 HOURS AGO
OCRegister

What’s next for USC? Oregon State and a QB decision

Oregon State (2-1, 0-0 in Pac-12) at USC (2-1, 1-1) Oregon State update: The Beavers are coming off a 42-0 win over Idaho, their second win in a row and the second consecutive game in which they have scored over 40 points. The shutout win gave Oregon State the luxury of resting many of its starters in the second half this past weekend. … QB Chance Nolan has completed 70.3% of his passes for 634 yards, five touchdowns and no interceptions through three games, while RB B.J. Baylor has rushed for 264 yards and seven TDs. … The Oregon State defense ranks ninth nationally at tackles for loss, averaging nine per game. The Beavers allow on three TFLs per contest, making the line of scrimmage an important battle for this game.
OREGON STATE・3 DAYS AGO
USA TODAY

Wins on the road against top 10 opponents have pushed Oregon and Iowa near the top of the latest NCAA Re-Rank 1-130.
COLLEGE SPORTS・2 DAYS AGO

Long lines for drinks and food at the OU football game Saturday have fans mad and the athletic department apologizing.
NORMAN, OK・2 DAYS AGO
heartlandcollegesports.com

FOX Sports’ “Big Noon Saturday” show was on the University of Oklahoma campus on Saturday to celebrate the 50th anniversary of the “Game of the Century” between the Oklahoma Sooners and Nebraska Cornhuskers. Former OU head coach Bob Stoops is now a commentator and contributor to FOX Sports’ college football...
TEXAS STATE・4 DAYS AGO
The Clemson Insider

On SportsCenter, ESPN personality Paul Finebaum was asked which College Football Playoff contender, in his opinion, has been the most disappointing through the first three weeks of the season. (...)
COLLEGE SPORTS・2 DAYS AGO
Sportsnaut