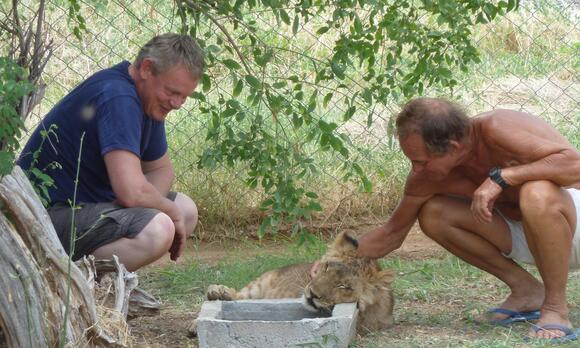 Martin Clunes: My Travels and Other Animals

In 2012, Clunes made a moving documentary about his friend the conservationist Tony Fitzjohn, following Fitzjohn’s mission to repopulate a remote area in Kenya with lions. That is where Clunes met Mugie the cub, who is the subject of this instalment of the actor’s travelogue. Hannah Verdier

Can I Improve My Memory?

Sandi Toksvig takes celebrities back to the classroom in this reality contest. She tasks the ex-boxer Chris Eubank, the former Strictly judge Len Goodman, the Love Island winner Amber Gill, the Naked Attraction presenter Anna Richardson and the actor Nina Wadia with drastically improving their memories after a month’s coaching by memory grandmasters. In tonight’s second episode, one of the five faces will be kicked off the contest if they fail to recite texts from the likes of Shakespeare, Austen and Martin Luther King by heart. Ammar Kalia

Escape to the Chateau: Make Do and Mend

Fix up, look sharp: Angel and Dick Strawbridge continue their quest to help UK households thriftily realise their DIY dreams. There are projects big and small on the varied docket tonight, including an ambitious narrowboat conversion and the resurrection of a doll’s house. Graeme Virtue

This documentary series about the late royal reaches its third and final instalment. The Berlin Wall has come down, Nelson Mandela has walked free and the Spice Girls are preaching “girl power” around the world. The stage is set for the emergence of a new kind of emotional liberation, with Diana as its figurehead. Ellen E Jones

The hapless pair of comics continue their quest to find their sporting niche with the help of Team GB. Aaron Heading focuses the pair’s aim as he takes them clay-pigeon shooting, while Max Whitlock gets them on the mats for some gymnastic floorwork and Denise Lewis sets them loose on the athletics track. AK

Melvyn Bragg celebrates 25 years of the wide-ranging arts awards show with this in-person ceremony hosted from the Savoy in London. Nominees include Dua Lipa, J Hus and Sault in the pop category and I May Destroy You, Small Axe and Industry in the hotly contested drama section. AK

Ukraine’s defence minister sought to dismiss speculation in Kyiv that he would be forced to resign or be reshuffled at a lengthy press conference where he also claimed that Russia was taking 500 casualties a day in Bakhmut. Oleksii Reznikov, one of Ukraine’s better known figures internationally, has been...
2 HOURS AGO
The Guardian

Was Beijing trying to sabotage talks with the US, monitor the speed of its military response, or just test Joe Biden’s mettle?
MONTANA STATE・21 HOURS AGO
The Guardian

In an underfunded system, a killing a week is committed by former prisoners
12 HOURS AGO
The Guardian

My ancestors were pillaged to bring the Benin bronzes to England. It is white supremacy that keeps them here

This month marks 126 years since the British punitive expedition resulted in the theft of more than 10,000 objects from the Benin kingdom. They came to be known as the Benin bronzes, and have been at the centre of repatriation debates ever since. Though the original victims are long gone,...
7 HOURS AGO
The Guardian

Liam Wilson has reflected on the “piss take” that was his attempted world boxing title heist in Phoenix, saying he’d fight Emanuel Navarrete again for the WBO strap if his protest is upheld. The Australian was nursing a sore head a day after the controversial defeat at...
ARIZONA STATE・19 HOURS AGO
The Guardian

Nicola Bulley: mystery of 10-minute window in which she disappeared

A week after 45-year-old vanished walking her dog by the River Wyre, her family remain in anguish as the search continues
2 DAYS AGO
The Guardian

If the worst happens, Taras, 23, Vladyslav, 21, and their commander, Olexiy, 39, are well aware that the Ukrainian government will deny any knowledge of them. In western capitals, there is a collective shudder at the very thought of them. They are members of the Bratstvo battalion, a volunteer group...
1 DAY AGO
The Guardian

‘Our own little Vatican’: inside the biggest Catholic parish church in North America

W — ith declining congregations, shuttered chapels and an ever shrinking number of priests, it is easy to assume that church in the US is on the way out for good. As parishes struggle to attract younger generations, and almost a third of Americans now declare no religious affiliation, thisone nation under God seems to be rapidly losing its faith.
CALIFORNIA STATE・2 DAYS AGO
The Guardian

Britain was sick before Brexit. Until the left accepts that, the likes of Liz Truss won’t give up | Nesrine Malik

Brexit was the wrong answer to a perfectly valid question. In order to win now, Keir Starmer must steer clear of the status quo, says Guardian columnist
8 HOURS AGO
The Guardian

The first task is to wipe off or cover up the Z, says Anatoly, 44, of the call sign infamously daubed on Russian hardware involved in the war in Ukraine. “We don’t want friendly fire later on.” Then the mechanics get to work. In a secret location...
2 DAYS AGO