By Alex Gangitano
Posted by
The Hill
11 days ago 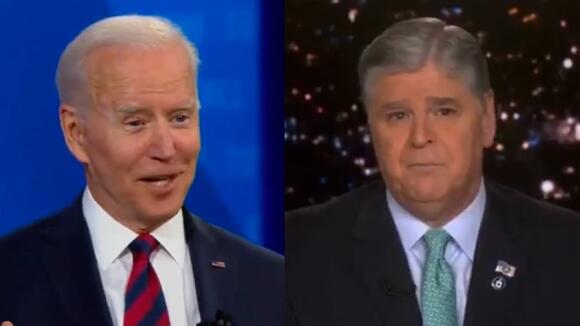 President Biden said it is good that Fox News anchors are now urging viewers to get vaccinated while poking fun at hosts for changing their rhetoric Wednesday.

"One of those other networks — they’re not a big fan of mine, one you talk about a lot — but if you notice, as they say in the southern part of my state, they’ve had an altar call, some of those guys,” Biden, invoking the religious act of stepping forward to make a spiritual commitment, said during a CNN town hall.

“All of a sudden they’re out there saying, 'Let’s get vaccinated, let’s get vaccinated.' The very people before this were saying — I shouldn’t make fun of it, that’s good. It's good," Biden said to host Don Lemon . "You just have to keep telling your truth."

Biden's remarks came in response to a question about what the White House was doing to combat medical misinformation.

The president didn’t mention Fox or any hosts by name, but his comments come after Fox’s Sean Hannity this week told viewers “I believe in the science of vaccination” and "Fox & Friends" host Steve Doocy noted on-air that the majority of people dying of COVID-19 are unvaccinated.

White House press secretary Jen Psaki said Tuesday that the Biden administration has reached out to Fox News and other networks about their coverage of the pandemic amid efforts to boost vaccination numbers across the country.

"We’ve been in touch with every network and many, many media outlets about coverage of COVID-19 to make sure people have accurate information, to voice concerns when we have them, and I think you all know we’re never shy when we have an issue with a story," Psaki said at a press briefing.

The network's conservative programming has been of particular focus given its mixed messaging about vaccines and their effectiveness. While hosts such as Hannity have directly encouraged vaccination, other personalities such as Tucker Carlson and Laura Ingraham have criticized vaccine mandates and maintained that viewers should not be compelled to get the vaccine.

The president's remarks Wednesday come amid a broader effort by the Biden administration to address vaccine hesitancy and combat misinformation about the coronavirus, as officials seek to drive up vaccine rates to address the rapidly spreading delta variant.

During the town hall, Biden also addressed backlash to his comments last week condemning Facebook over the spread of COVID-19 misinformation, in which he declared that platforms like Facebook are "killing people" with misinformation.

On Monday, the president softened his criticism, saying he wished the tech giant would do more to stop the spread of inaccurate information.

He brought up a report that 12 people were responsible for roughly 65 percent of all the anti-vaccine misinformation on social media platforms, which the White House announced last week.

“I said they’re killing people — those 12 individuals — that misinformation is going to kill people. Not a joke, not a joke,” he said.

“It’s like telling your kid, I’ll tell you what, they’re 4 years old, when you see a red light, cross the street. I mean, come on. What we’re trying to do is use every avenue we can — public, private, government, nongovernment — to try to get the facts out, what they really are,” he added.

The White House was in a back and forth with Facebook after the administration stressed that social media platforms needed to do more to stop the spread of misinformation. Facebook had hit back, arguing it had helped millions of users access helpful information about vaccines.

On Sunday’s MediaBuzz, Fox News’ Howard Kurtz criticized pundits “shaming” unvaccinated Americans — and that included Fox colleague Geraldo Rivera. The spread of the Delta variant has led to a rise in covid cases around the United States, and there’s been a great deal of frustration that more people aren’t vaccinated against the virus. Rivera said on The Five last week that people who aren’t vaccinated should at least get tested every week, and if they’re not, “you are an arrogant, selfish SOB.”

Meghan McCain: I skipped Mary Trump interview because she's 'too irrelevant for my time'

Soon-to-be-former "The View" co-host Meghan McCain skipped an interview with guest Mary Trump on Monday's program, saying the former president's niece wasn't worth it. "I thought she was too irrelevant for my time," McCain told Fox News. McCain, who is in her final week on the program, appeared on Monday's...

Sen. Ted Cruz (R-TX) responded to reports on the border crisis on Hannity Wednesday. Cruz puts the blame directly onto President Biden, saying his election lead to “a COVID super-spreader event.”. First, the Texas senator described his recent visit to the border. “I have seen cages of little boys and...

President Joe Biden, 78, last week delivered a rambling and bizarre answer to a question from CNN host Don Lemon that prompted renewed questions about his mental acuity. “When will children under 12 be able to get vaccinated?” Lemon asked. Here’s Biden answer (and we swear we’re not making this up):

Former President Donald Trump's niece, Mary Trump, told the co-hosts of ABC's The View Monday that the division sewed by her uncle was evident on their show after Meghan McCain left before her interview. Mary Trump appeared on The View Monday afternoon to promote her new book, The Reckoning. During...

Did Trump follow his pledge to donate the last 6 months of his presidential pay? It’s a mystery.

Donald Trump promised to give away his $400,000 presidential salary. And he kept that promise, publicly announcing each gift — at least, for his first 3½ years in office. Then, in the middle of last year, the announcements stopped. Trump’s White House never said where — or even if —...

Trump-boosting pillow magnate Mike Lindell, whose company MyPillow is one of Fox News’ largest advertisers, said on Thursday night that he is pulling his commercials from the network because they won’t run a commercial pushing baseless claims of voter fraud in the 2020 election. The Wall Street Journal was the...

'Sir, there is something on your chin': Moment Biden wipes his face after staffer spotted a yellow mark and handed him a note during Zoom meeting with governors

President Biden was prompted to wipe a yellow mark from his face during a Zoom meeting with western governors on Friday after a staffer handed him a note saying: 'Sir, there is something on your chin'. Biden was speaking about the responses to raging wildfires throughout the country when an...

Meghan McCain said Friday that Democrats should give former President Trump “a little credit” for the COVID-19 vaccine. During Friday’s episode of “The View,” McCain said giving Trump credit for the vaccine would help show that getting vaccinated is a bipartisan issue. “If the White House truly wanted to show...

CNN’s "Reliable Sources" host Brian Stelter followed orders from the White House on Sunday, parroting talking points provided by the Biden administration to scold the media for overhyping COVID risk to vaccinated individuals. The White House is reportedly irked by the way the media has covered the pandemic lately, so...

Kinzinger Responds to Fox’s Ingraham Mocking Him for Tearing Up at Jan 6 Hearing: ‘A Very Cold-Hearted Thing’

Congressman Adam Kinzinger (R- IL) responded Wednesday to commentary from Fox News’ Laura Ingraham about the January 6 select committee hearing. Kinzinger teared up Tuesday as he spoke at the hearing where four officers testified about the riots at the Capitol. On her show that night, Ingraham mocked “theatrics” at the hearing with joking awards, including giving Kinzinger and Adam Schiff the award for “best use of tears and dramatic pauses in a leading role.”

The disinformation network known as Fox News recently told its viewers that Dr. Anthony Fauci is the “guy who created covid” after, mere days earlier, another host said the White House’s chief medical adviser had been unfairly “vilified” and treated as though he’s “Lex Luthor.”. On Wednesday, Fox’s Tucker Carlson...

‘The View’: Meghan McCain Bickers With Joy Behar, Claims “I Have A Higher Likelihood Of Getting Shot … Than Getting COVID”

The Daily Show is currently on an extended summer hiatus—with host Trevor Noah set to return with a “brand new look and feel” starting in mid-September. But that hasn’t stopped the team of writers and researchers from working diligently behind the scenes to hold Fox News hosts and other conservatives accountable for spreading dangerous misinformation.