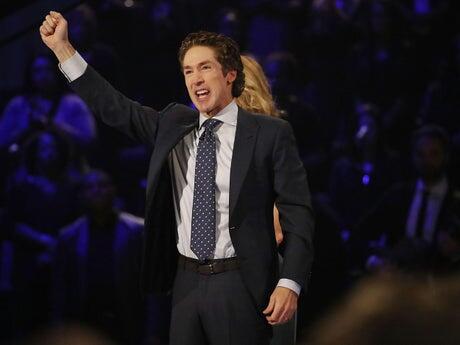 The Bible says it is easier for a camel to pass through the eye of a needle than it is for a rich man to enter the kingdom of Heaven, but one celebrity pastor does not seem terribly concerned with the warning.

Joel Osteen , one of the wealthiest and most popular preachers in the US, has come under fire after evidence of his luxurious lifestyle was made public on social media.

Mr Osteen, who leads the Lakewood Church in Houston - one of the enormous congregations that are dubbed "megachurches" - was criticised after it was revealed the pastor owns a Ferrari sportscar that costs more than $300,000 dollars.

Users on Twitter lambasted the pastor, arguing his ownership of a Ferarri is a good argument for the government taxing churches.

"Ferrari is trending. That means either someone won a race or Joel Osteen took some of the money Jesus told him to give to the poor and went on another shopping spree," one user said.

Mr Osteen - whose net worth is estimated at more than $50m - is a the figurehead of what has become known as the "prosperity gospel," which teaches that material wealth is indicative of God's blessing on a person's life. Prosperity theology is especially lucrative for pastors, as it pushes the idea that those who give money to God will be blessed with money themselves. In churches that teach that philosophy, giving money to God, of course, means giving money to the church leaders.

That theology flies in the face of traditional Christian teaching, which promotes giving to the poor, being a good steward of one's resources, and sharing one's wealth with fellow Christians. Many protestant groups have criticised Mr Osteen and prosperity theology.

In addition to the Ferrari, Mr Osteen also owns a $10.5m mansion. He claims he takes no salary from his church, but manages to live his lavish lifestyle on the proceeds from his book sales.

Mr Osteen came under fire during the coronavirus pandemic for taking $4.4m in PPP federal funding for his church. That loan was one of the largest for any Houston area business or nonprofit.

The church defended the loan, claiming it has a staff of 368 full and part time employees who were in need of the assistance.

Mr Osteen's church also faced criticism during Hurricane Harvey after Mr Osteen appeared to balk at the idea of using the church to house refugees from the storm. After blowback, the church opened its doors to be used as a shelter. Mr Osteen maintains that the church was always open to take in refugees.

"We've always been open ... How this notion got started, that we're not a shelter and we're not taking people is a false narrative," he said.

Mr Osteen did not immediately respond to enquiries from The Independent .

well, we all should know by now..Joel Osteen is not a Christian. he's not saved and he does not preach the word of God. he's a motivational speaker using God as a means to make$$$$$$$. fake, and blasphemous.

why dont people wake up. He would take a old widows last 10.00 and never blink an eye. He lives in a 10 million dollar home and his wife has one room alone just for shoes and people are sending this con man money.

One travel blogger defended her visit and pictures of the converted prison to Newsweek.
LIFESTYLE・4 DAYS AGO
Indy100

An upcoming CBS reality show called The Activist is being dramatically changed in response to the backlash surrounding the format of the show as well as one of the hosts, Julianne Hough wearing blackface. The show was initially planned as a reality competition in which activists compete against each other...
TV & VIDEOS・10 DAYS AGO
tvinsider.com

‘The Activist’ Changing From Competition Show to Documentary After Backlash

It’s back to the drawing board for the CBS reality series The Activist, which is now being retooled as a one-time documentary special following widespread backlash. The show was originally conceived as a five-week reality competition series, where six activists representing three causes — health, education and environment — would compete in challenges to raise awareness about those issues. Portions of the show had already been filmed; however, according to Variety, this new version will be entirely new, with filming starting from scratch.
TV SERIES・10 DAYS AGO
Amomama

E-40 has amassed incredible fame and fortune in the music industry despite his tough childhood and addiction problems. In addition to his successful career, he is also a committed husband and a supportive father. Earl Tywone Stevens Sr., popularly known as E-40, has been in the rap game for several...
RELATIONSHIPS・3 DAYS AGO

James Corden has come under fire from BTS fans after the talk show host made a series of jokes about the boyband on The Late Late Show. On the September 20 episode of The Late Late Show With James Corden, the British comedian poked fun at the South Korean group’s recent appearance at the United Nations General Assembly. Corden said that the group were “pretty unusual visitors” for the UN, while referring to the group’s fanbase as “15-year-old girls”.
MUSIC・5 DAYS AGO
dexerto.com

David Dobrik and Jason Nash have been receiving some backlash after they uploaded their first episode of the VIEWS podcast after a 5-month break. YouTuber David Dobrik and Jason Nash have been collaborating on the VIEWS podcast together since 2017, inviting on a huge array of guests, and talking about some of the most topical things on social media.
TV & VIDEOS・10 DAYS AGO
Hello Magazine

Beyoncé is notoriously private when it comes to her family life but delighted fans on Monday after sharing a rare photo with her youngest daughter Rumi. The Black Parade hitmaker took to Instagram to share a series of snapshots from her vacation, and it looked liked they were having the best time!
CELEBRITIES・13 DAYS AGO

In a rare instance of everyone actually agreeing on the internet, CBS’s new show “The Activist,” which pits six activists against each other to promote various social causes, was collectively dragged as the worst idea ever when it was announced earlier this week. Co-hosted by Priyanka Chopra, Usher and Julianne...
TV & VIDEOS・11 DAYS AGO
buzzfeednews.com

Amy Sussman / Getty Images, Rich Fury / Getty Images for dcp, Emma Mcintyre / Getty Images for iHeartMedia. A series that was set to pit activists against each other in pursuit of funding for their causes will instead be a documentary after social media backlash forced the show’s creators to admit that they “got it wrong.”
TV & VIDEOS・10 DAYS AGO
Popculture

Just days after announcing The Activist, CBS and producers are changing the show from a reality competition series to a documentary. The show was announced earlier this year, but it only gained attention after Usher, Priyanka Chopra Jonas, and Julianne Hough were introduced as the judges last week. The Activist was quickly bashed for trivializing activism as a game, and even Hough spoke out against it, agreeing that the judging aspect "missed the mark."
TV & VIDEOS・10 DAYS AGO
theintell.com

Competition over for 'The Activist,' as producers revamp TV show after scathing backlash

Activism for a noble cause starting at a grassroots level is usually lauded by the public. In the case of "The Activist," activism packaged for reality TV produced the opposite reaction. The CBS five-part series, in which at least one of the activists is from the Mid-Atlantic region, has received...
TV SERIES・10 DAYS AGO

Over three years after he claimed to have slept with Cardi B, King Yella has finally turned to his Instagram page to issue a public apology to the “Bodak Yellow” rapper. He posted a throwback photo of the two hanging out in what appears to be a hotel room with a heartfelt caption.
CELEBRITIES・2 DAYS AGO
blackchronicle.com

Now Kelly's lawyer, Monica Ewing, is assuring everyone that Kelly is "safe." Ewing told the Cobb County Police Department that Price was recovering from COVID-19 at an undisclosed location and is not in harm’s way, according to TMZ. Kelly announced that she was battling the virus in July and was reportedly hospitalized and discharged.
CELEBRITIES・19 HOURS AGO
USA TODAY

The show's co-producer, the activist organization Global Citizen, announced the show will now be a one-night primetime documentary.
TV & VIDEOS・11 DAYS AGO
Newsweek

The hotel, which can cost up to 500 pounds per night, was an active jail until 1996.
LIFESTYLE・4 DAYS AGO
The US Sun

ANTHONY Johnson, best known for his roles in House Party and Friday, was pronounced dead on September 20, 2021. Johnson was rushed to a Los Angeles hospital earlier in the month after he was “found lifeless” in a store, TMZ reported. Who was Friday star Anthony Johnson and what was...
CELEBRITIES・6 DAYS AGO
Daily Mail

A Texas school board has moved towards firing a principal over claims he pushed critical theory after he raised eyebrows over an intimate Facebook photoshoot with his wife. On Monday, the Grapevine Colleyville Independent School District school board unanimously voted 7-0 for the non-renewal of Colleyville Heritage High School principal Dr. James Whitfield's contract.
SOCIETY・4 DAYS AGO
The US Sun

A "BEAUTIFUL" personal trainer mum killed herself after "not being able to cope" - and her heartbroken husband has paid an emotional tribute to her. Michelle Sparman, 48, leaves behind two sons - Max, 11 and Sam, 8 - as well as her devastated fiancé Roger Stephens, 51. Michelle, who...
CELEBRITIES・22 DAYS AGO