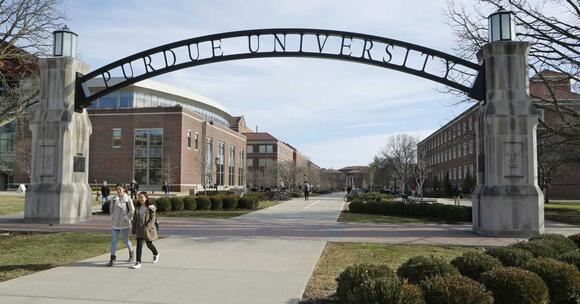 Halpin will also join the Boilermakers as chief operating officer. He will primarily oversee responsibility for revenue-producing activities, strategic communications, brand enhancement, marketing and fan experience, sports medicine and performance, event operations and facilities. He will also serve as the sport administrator for the Purdue men’s basketball team.

“Our department is thrilled to welcome Ken and his family to our Purdue Athletics team,” Bobinski said in a release. “Ken is a dynamic and engaging leader who has fostered tremendous success within his previous organizations. His focus on providing a first-class student-athlete experience while prioritizing academic achievement, athletic excellence, community engagement and revenue generation are all principles that we value here at Purdue. We look forward to having Ken, his wife, Amber, and their three children, Kenny, Jonathan and Jill Marie, join us here in West Lafayette very soon.”

Halpin helped Winthrop set new records for departmental cumulative grade point average each year since 2016-17, including a record-high 3.35 GPA by the student-athlete population for the 2020-21 academic year.

“Amber and I have always said it would take something very special to pull us away from Winthrop and Rock Hill,” Halpin said in a release. “This opportunity to come to Purdue is that and more. We could not be more excited to join the West Lafayette community, and I'm deeply grateful to Mike Bobinski, President Daniels and the Purdue University Board of Trustees for allowing us to become Boilermakers. There is so much to look forward to in the future for Purdue, and we cannot wait to get started.”

Winthrop’s men’s basketball program won six championships during Halpin’s tenure in Rock Hill, South Carolina. The team won the regular-season and tournament championships in the Big South Conference in 2017, 2020 and 2021.

Numerous programs for the Eagles were competitive in their respective sports. The volleyball team won the Big South championship in the 2019-20 season with a perfect 14-0 record in the conference.

The school's baseball, softball and lacrosse programs were also fighting for titles before their seasons were canceled due to the COVID-19 pandemic.

Before his time at Winthrop, Halpin was the deputy athletic director for Eastern Washington, where he oversaw all external operations.

Halpin received a Ph.D. in education from Washington State University in 2015 and a Master’s in sports administration from Gonzaga University in 2008. He was an adjunct professor at Gonzaga where he taught in the sport management program for seven years.

He earned a Bachelor’s degree from Willamette University in 2005, where he was an all-conference performer in both football and baseball. Halpin is married to his wife, Amber, and the two have three children, Kenny, Jonathan and Jill Marie.

WEST LAFAYETTE, Ind. — Making the jump from being a transfer from UNLV to helping a Big Ten program win football games as a walk-on is no small feat. Purdue's Dylan Downing was thrust into that position when starting running back Zander Horvath suffered an injury in the team's 49-0 victory against UConn last week.
WEST LAFAYETTE, IN・12 HOURS AGO
BoilermakersCountry

When the USC football program made the decision to fire coach Clay Helton, rumors began to surface regarding candidates to fill his spot. Among them, Penn State coach James Franklin is being named. Franklin was questioned about the speculation of him leading the Trojans, but he said he will discuss...
COLLEGE SPORTS・2 DAYS AGO
BoilermakersCountry

WEST LAFAYETTE, Ind. — As Purdue football prepares to take on Notre Dame on Saturday in South Bend, Indiana, fans can look forward to seeing a familiar face when NBC Sports begins its television broadcast of the game. Former Boilermaker legend Drew Brees will be on the call as an...
WEST LAFAYETTE, IN・3 DAYS AGO
BoilermakersCountry

The Memphis Grizzlies and Boston Celtics recently made a trade that sent Kris Dunn and former Purdue star Carsen Edwards to the Grizzlies and sent Juancho Hernangomez to the Celtics. The full announcement of the trade can be. Edwards could use a fresh start after seeing limited playing time during...
NBA・11 HOURS AGO

WEST LAFAYETTE, Ind. — Purdue football is scheduled to play Illinois on Sept. 25 at home inside Ross-Ade Stadium. It was announced Monday that the Boilermakers will kick off their Big Ten schedule at 3:30 p.m. ET, and the game will be broadcast live on the Big Ten Network. This...
ILLINOIS STATE・3 DAYS AGO
BoilermakersCountry

Former Purdue running back Raheem Mostert was forced to leave the San Francisco 49ers season-opening game against the Detroit Lions. After multiple evaluations of his injured knee, the seventh-year running back's season is coming to an end. Mostert confirmed on his social media that he will have season-ending knee surgery.
NFL・1 DAY AGO
BoilermakersCountry

EAST HARTFORD, Conn. — Purdue football followed up a season-opening victory with a masterful performance on the road against UConn on Saturday. Both the offense and defense executed their gameplans, leading to a dominant 49-0 win at Pratt & Whitney Stadium in East Hartford, Connecticut. After a three-and-out for the...
EAST HARTFORD, CT・4 DAYS AGO
BoilermakersCountry

David Bell, Purdue Offense Dominates First Half in 49-0 Victory Over UConn on the Road

EAST HARTFORD, Conn. — When David Bell had the ball in his hands, he looked as though he was gliding on the field. The Boiler’s star wide receiver used his long strides and sharp movements to send defenders hurtling past him. Bell was an unstoppable force for a Purdue offense...
EAST HARTFORD, CT・5 DAYS AGO

The Purdue Boilermakers face their first road matchup of the season against the UConn Huskies in Pratt & Whitney Stadium in East Hartford, Connecticut. Purdue earned a 30-21 victory in its season opener over Oregon State, while UConn lost its first two games of the year. The Huskies are now led by interim head coach Lou Spanos — the team's defensive coordinator — after Randy Edsall stepped down.
COLLEGE SPORTS・5 DAYS AGO
BoilermakersCountry

Start Time Announced for Purdue vs. North Carolina in the 2021 Hall of Fame Tip-Off Classic

WEST LAFAYETTE, Ind. — As the Purdue basketball program continues to prepare for the upcoming 2021-22 season, tip times have been announced for this year's rendition of the Hall of Fame Tip-Off Classic in November at Mohegan Sun in Connecticut. Purdue will play North Carolina at 4 p.m ET on...
WEST LAFAYETTE, IN・6 DAYS AGO
BoilermakersCountry

WEST LAFAYETTE, Ind. — In the first week of the season, Purdue football ran the ball well enough to get the job done in a 30-21 victory over Oregon State at Ross-Ade Stadium. But the team's running backs have a higher standard than that. Redshirt senior running back Zander Horvath...
WEST LAFAYETTE, IN・6 DAYS AGO
BoilermakersCountry

WEST LAFAYETTE, Ind. — The Big Ten announced the conference schedule for the upcoming 2021-22 college basketball season on Wednesday. Purdue will open Big Ten play against Iowa on Dec. 3 at Mackey Arena. Times and TV designations will be released at a later date. 2021-22 Purdue Basketball Big Ten...
WEST LAFAYETTE, IN・8 DAYS AGO

WEST LAFAYETTE, Ind. — Despite UConn's struggles this season, Purdue coach Jeff Brohm knows it won't be a walk in the park when his team travels to Hartford, Connecticut on Saturday. The Huskies are 0-2 so far this season, their previous head coach — Randy Edsall — stepped down and...
WEST LAFAYETTE, IN・8 DAYS AGO
BoilermakersCountry

WEST LAFAYETTE, Ind. — As Week 1 of the 2021 college football season came to a close, 247Sports revealed a way-too-early 2022 NFL mock draft that included several of the country's top players. Purdue junior defensive end George Karlaftis was projected as the No. 16 overall pick in the first...
NFL・9 DAYS AGO
BoilermakersCountry

WEST LAFAYETTE, Ind. — Purdue football's Week 2 opponent, the University of Connecticut, will soon be looking for a new head coach. On Sunday, UConn coach Randy Edsall announced he is retiring at the end of the 2021 season. He released a statement on social media that said the following:
WEST LAFAYETTE, IN・10 DAYS AGO
BoilermakersCountry

Report Card: Purdue Pulled Away at the Right Time in 30-21 Win Over Oregon State

WEST LAFAYETTE, Ind. — Purdue football may not have aced all of its assignments leading up to the final of Saturday's season-opening game against Oregon State at Ross-Ade Stadium, but it made the adjustments necessary to come away with a 30-21 victory even when the tests were challenging. There were...
OREGON STATE・11 DAYS AGO

WEST LAFAYETTE, Ind. — The Purdue defense entered the 2021 season intending to play fast, physical and aggressive. It was talked about all offseason, and it showed on the field in the team's 30-21 season-opening win against Oregon State on Saturday. The Boilermakers completely overhauled their defensive coaching staff, but...
OREGON STATE・11 DAYS AGO
BoilermakersCountry

Big Ten Football: Minnesota Star Running Back Mohamed Ibrahim out for Season due to Injury

WEST LAFAYETTE, Ind. — The 2021 college football season has arrived for Purdue, and its first game will come in front of a home crowd at Ross-Ade Stadium against Oregon State. This is just the second-ever matchup between the two programs, with the first coming on Oct. 21, 1967. Oregon...
WEST LAFAYETTE, IN・12 DAYS AGO
BoilermakersCountry

WEST LAFAYETTE, Ind. — Ahead of the 2021-22 college basketball season, Athlon Sports released its preseason All-American teams Thursday. Purdue joined Gonzaga and UCLA as one of three programs to have two players recognized among the three teams. Sophomore guard Jaden Ivey was named a second-team preseason All-American, while senior...
COLLEGE SPORTS・13 DAYS AGO