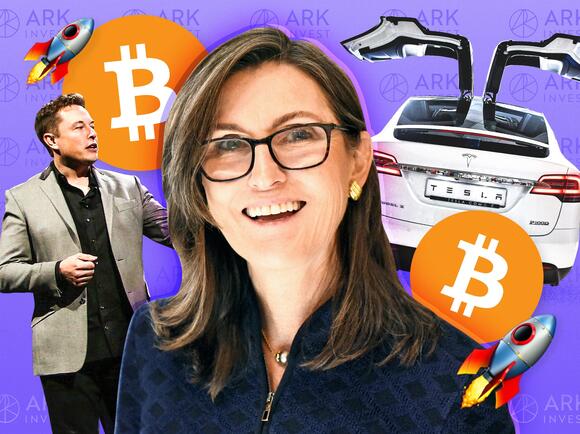 Bitcoin's surged as much as 10% on Wednesday as Tesla CEO Elon Musk, Square CEO Jack Dorsey, and Ark Invest's Cathie Wood gathered to talk about cryptocurrencies at The B Word conference .

Musk, Dorsey, and Wood answered a series of questions on cryptocurrencies and addressed a number of pain points associated with bitcoin, including its extreme volatility, intense energy usage, and reliance on fossil fuels and sustainable energy.

The surge higher in bitcoin helped the popular cryptocurrency reclaim a key technical support level at $30,000. As of Wednesday afternoon, bitcoin traded as high as $32,820, well above its Tuesday low of $29,308.

Many technical analysts view bitcoin's $30,000 level as a make or break level for the cryptocurrency that could lead to significant downside if it doesn't hold.

Katie Stockton of Fairlead Strategies said in a note on Wednesday that since the $30,000 level is heavily watched by traders, it is prone to a shakeout below that level, also known as a false breakdown. A false breakdown often traps bears below a key support level before surging higher.

So far, that playbook is playing out, with bitcoin breaking the $30,000 level on Tuesday before surging significantly higher on Wednesday.

Ultimately, bitcoin holding the $30,000 support level is instrumental for bitcoin bulls as they look to stem the significant bleeding in the crypto space that has occurred since bitcoin topped out near $65,000 in mid-April.

Read more: The head economist at a blockchain fintech firm names 2 of the most promising crypto SPAC deals on his radar - and explains why blank-check companies can be better alternatives to buying cryptocurrencies

Not Just Bitcoin, Dogecoin Wallets, Robinhood Could Let You Delve Even Deeper Into Cryptoverse Soon

Robert Kiyosaki foresees a “giant stock market crash” within the next month, but believes in holding on to a few select asset classes. What Happened: In a tweet from Sunday, the "Rich Dad Poor Dad" author told his 1.7 million Twitter followers he expects a massive crash in the near future.
STOCKS・14 HOURS AGO
WashingtonExaminer

German hamster Mr. Goxx is running circles around the competition in the cryptocurrency arena.
PETS・8 HOURS AGO
24/7 Wall St.

China banned all crypto transactions on Friday, but experts say the move was mostly priced in for bitcoin

"The reaction is significantly smaller than previous bans as the market has already priced in the risk," Wes Fulford of Viridi Funds said.
MARKETS・1 DAY AGO
MarketWatch

Wood sees no bubble for the stock market, but is ready to jump ship on Tesla if shares reach her five year target by next year.
STOCKS・2 DAYS AGO
dailyhodl.com

This ‘Magical’ Altcoin Project Has Soared 116% This Week, Defying Bitcoin and Crypto Markets

An altcoin powering the crypto project Abracadabra has traders spellbound this week after surging by more than 100%. Data from CoinGecko shows the price of Spell Token (SPELL), which currently holds a market cap of about $221 million, rose from a 7-day low of $0.00197753 to a high of $0.00428190 this week, which represents an increase of 116%.
MARKETS・2 DAYS AGO
protocol.com

Elon Musk and Grimes are 'semi-separated'

After three years, Elon Musk and Grimes are going their separate ways but will continue to coparent their one-year old son, the billionaire CEO told Page Six in a rare public interview. "It's mostly that my work at SpaceX and Tesla requires me to be primarily in Texas or traveling...
SMALL BUSINESS・3 DAYS AGO

NEW YORK (Reuters) - China's moves to crack down on bitcoin trading dealt another blow to Cathie Wood's ARK Innovation Fund, which outperformed all other U.S. equity funds last year but is now mired among the worst of its peers. Wood, who has said that bitcoin will rally to $500,000,...
MARKETS・3 DAYS AGO
Markets Insider

The Twitter bet reflects Wood's thinking that regulatory issues for digital assets will be manageable.
STOCKS・3 DAYS AGO
Fortune

Cathie Wood is prepared to ‘peel out’ of Tesla

Subscribe to Fortune Daily to get essential business stories straight to your inbox each morning. Cathie Wood would sell Tesla Inc. if its price hit her five-year target in the coming year. The electric-vehicle maker’s stock is now roughly $750 and her base price target in five years is $3,000,...
STOCKS・4 DAYS AGO
Fortune

Subscribe to Fortune Daily to get essential business stories straight to your inbox each morning. Cathie Wood and buy-the-dip retail traders are snapping up shares of DraftKings Inc. and boosting the stock after it got hammered this week over its move to buy U.K. gambling company Entain Plc. Wood’s Ark...
GAMBLING・4 DAYS AGO

Crypto billionaire Mike Novogratz says bitcoin holding at $40,000 shows the market is in good shape - and recommends buying the dip

Mike Novogratz said investors are still very interested in crypto and that he's not nervous about the recent sell-off.
STOCKS・4 DAYS AGO
Benzinga

Cathie Wood’s investment management firm Ark Invest further increased its exposure in Coinbase Global Inc (NASDAQ:COIN) on Tuesday as shares of the cryptocurrency exchange desk continued to trade much below the reference price set during its blockbuster listing in April. Ark Invest snapped up 108,527 shares — estimated to be...
STOCKS・5 DAYS AGO
zycrypto.com

Cathie Wood has long been a proponent of cryptocurrencies. For Bitcoin, the world’s most popular cryptocurrency, it issued the extremely bullish forecast that the price could be at $ 500,000 in five years. Would you like to invest in cryptocurrencies? Our guides explain how to do it within 15 minutes:
CURRENCIES・10 DAYS AGO
Benzinga

Cathie Wood-led Ark Invest on Wednesday further trimmed some of its stake in Tesla Inc (NASDAQ: TSLA), booking profits as the stock continued to show signs of recovery after months of dull performance this year. The popular asset management firm sold 81,609 shares — estimated to be worth $61.7 million...
STOCKS・11 DAYS AGO
The Independent

The volatility of bitcoin and other leading cryptocurrencies makes any kind of price prediction notoriously difficult.After an up-and-down few months for the market, analysts appear divided over which way it heads from here. Some believe we are in a cool-off period that will see the price slide to yearly lows, while others predict new all-time highs before the end of 2021.To get a perspective from both sides, we invited two experts to hear their views.Joining the discussion was Simon Trimborn, an assistant professor at the Department of Management Sciences at the City University of Hong Kong, who discussed his...
CURRENCIES・11 DAYS AGO
Entrepreneur

Ark Invest CEO Cathie Wood has a strong Bitcoin (CCC:BTC-USD) price prediction that crypto traders are going to want to take note of. According to Wood, BTC could soar as high as $500,000 per token in the next five years. Her price prediction for Bitcoin is based on if companies continue to expand out and adopt the cryptocurrency.
STOCKS・12 DAYS AGO