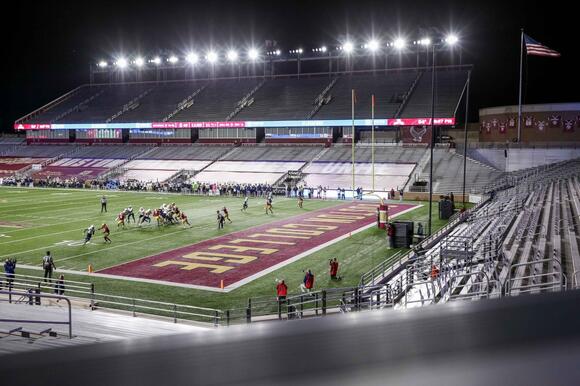 Update: According to a report on 247sports, Blackwell has committed to play at Arkansas State

Denzel Blackwell, a redshirt freshman from Houston Strake Jesuit has entered the transfer portal, first reported by Tyler Calvaruso of Eagle Insider. Last season, the defensive back appeared in eight games mostly on special teams. His play was pointed out this spring by head coach Jeff Hafley, as having an excellent spring. He had two pass breakups in the Jay McGillis Spring Game in 2021.

A three star recruit in the Class of 2020, Blackwell came to Boston College over offers from Baylor, Dartmouth, Houston-Baptist, Louisiana-Monroe, and Temple. The path to a starting role this season would have been tough with Elijah Jones, Jason Maitre, Brandon Sebastian, and Josh DeBerry returning. Though based on Hafley's spring comments, he may have found playing time sooner rather than later.

You May Also Enjoy:

Who was the mystery commitment?

Commenting: To sign up for our new commenting system, just click on the green button above and it will take you directly to the comment section! Another way to find the find comment section just look below the Around the Web section below this article and get chatting! We would love to hear your thoughts and have you join our community!

Florida State suffered one of the most-shocking losses of college football’s Week 2 slate. The Seminoles, coming off an impressive Week 1 showing against top 10 Notre Dame, suffered a stunning upset loss against Jacksonville State on Saturday night. Florida State was upset, 20-17, on a last-second Hail Mary!. The...
FLORIDA STATE・5 DAYS AGO
The Spun

The Dallas Cowboys have reportedly parted ways with one of their quarterbacks. According to ESPN NFL insider Jeremy Fowler, the NFC East franchise has released young quarterback Ben DiNucci. The former James Madison University quarterback played in three games for the Cowboys last season. He started a Sunday Night Football...
NFL・16 DAYS AGO
TMZ.com

LSU football student staff member Kevione Faulk -- daughter of 3-time Super Bowl champion Kevin Faulk -- tragically passed away on Monday, the team announced. She was just 19 years old. The Tigers released a statement on Faulk's passing ... saying, "We are heartbroken with the passing of Kevione Faulk,...
NFL・2 DAYS AGO
The Spun

The Cleveland Browns are trimming their roster down to the 53-man limit they have to reach by Tuesday. That trimming has led to one Browns quarterback getting released. According to Browns insider Scott Petrak, the Browns have cut quarterback Kyle Lauletta. Also getting pink slips on Monday were defensive end Curtis Weaver and safety Sheldrick Redwine.
NFL・17 DAYS AGO

Hello USC, this is Urban Meyer. About that job opening you have right now, how soon do you need me? Tonight is fine. Send the jet. College football fans were abuzz at the news of USC firing Clay Helton as their head football coach, Monday, two days after the Trojans lost to Stanford. And many pondered if Meyer, who has coached all of one game with the Jacksonville Jaguars, would be ready to ditch his brief NFL experiment and head west.
NFL・3 DAYS AGO
The Spun

One of the most-surprising results of college football’s Week 1 slate came at the Rose Bowl on Saturday evening. LSU, the No. 16 team in the country, was upset by Chip Kelly’s UCLA Bruins. The Tigers fell on the road, 38-27, on Saturday night. It’s been a tough post-national championship...
COLLEGE SPORTS・10 DAYS AGO
247Sports

USC's decision to fire head football coach Clay Helton is a costly one for the Trojans. The university will owe Helton more than $10 million in buyout funds with two seasons left on his remaining contract, Yahoo Sports college football insider Pete Thamel reports. USC's weekend loss to Stanford at...
COLLEGE SPORTS・3 DAYS AGO
The Spun

The reigning national-champion Alabama Crimson Tide continued its dominance into the 2021 season — routing No. 14 Miami 44-13 in their season opener. While it may look like there’s no team equipped to compete with the unstoppable force that is the Bama football program, ESPN college football analyst Paul Finebaum believes one team has a shot.
ALABAMA STATE・8 DAYS AGO

It never seemed like it would actually happen, but the USC football program has finally let go of head coach Clay Helton. It has been speculated about almost since the day that Helton was hired because it did not seem like USC went out and got the best coach that they could and settled yet again for another assistant.
COLLEGE SPORTS・3 DAYS AGO
FanSided

Kirk Herbstreit shared his thoughts on the Oregon Ducks pulling off a massive 35-28 upset victory over the Ohio State Buckeyes on Saturday. On a weekly basis, the Ohio State Buckeyes are heavily favored to walk off the field with a win. The Buckeyes held a huge advantage over the Oregon Ducks, considering that star defensive end Kayvon Thibodeaux was ruled out due to an ankle injury suffered the week prior. Yet, the Ducks shocked the world on Saturday with a 35-28 upset win over the Buckeyes.
OHIO STATE・5 DAYS AGO
The Spun

Head coach Nick Saban may not have been pleased with Alabama‘s season-opening win over Miami, but former Florida quarterback Tim Tebow sure was. Following the 44-13 win over the Hurricanes, Saban suggested his team didn’t play a full 60 minutes. Meanwhile, Tebow couldn’t stop gushing over the performance from quarterback Bryce Young.
ALABAMA STATE・5 DAYS AGO
The Spun

According to a report, USC has a “top choice” in mind to replace Clay Helton as head coach. He’s a man already familiar with Pac-12 territory. Per Scott Wolf of Inside USC, the Trojans’ No. 1 candidate is none other than Oregon head coach Mario Cristobal. Cristobal just scored the...
FOOTBALL・12 HOURS AGO

There are not many people in college football that know what it takes to win in the SEC like Tim Tebow does. The two-time SEC Champion knows just how grueling the conference is, and how tough it can be to win. Because of his experience, Arkansas fans might be excited to hear what Tebow had to say about the state of their program.
ARKANSAS STATE・5 DAYS AGO
247Sports

Texas got its not-so warm welcome to the SEC Saturday night, travelling to Fayetteville for its week two matchup against the Arkansas Razorbacks. A six-point favorite, the Longhorns limped away with a 40-21 loss against their former rival. It won’t be too long before that game matters for conference standings....
ARKANSAS STATE・4 DAYS AGO
Cleveland.com

COLUMBUS, Ohio -- If it were up to Ohio State defensive coordinator Kerry Coombs, he’d never start a true freshman at cornerback. Regardless of position, you never want to put a freshman with no experience in a situation where he can make a mistake. At cornerback, that becomes more of an emphasis because mistakes often mean giving up points. When you add a pandemic that takes away valuable teaching time, his stance was cemented even more last season, when he didn’t sideline any of his older players when the secondary struggled.
OHIO STATE・8 DAYS AGO
WolverineDigest

As the world of college continues to change and evolve, Paul Finebaum appears determined to remain the same. On Friday, Finebaum continued his routine of bashing Jim Harbaugh at every opportunity. Appearing on an episode of Keyshawn, JWill and Zubin, Finebaum once again launched into tirade regarding Harbaugh's tenure at the University of Michigan.
NFL・20 DAYS AGO

What Helton's Ouster Means to the Huskies, Rest of the Pac-12

Two games into a new college football season, USC fired coach Clay Helton and sent a clear message from Seattle to Tucson — the stakes have never been higher in the Pac-12 Conference. Consider that the league has an aggressive new commissioner in George Kliavkoff rather than the reactionary Larry...
SEATTLE, WA・3 DAYS AGO
FanSided

USC football has to find a replacement for Clay Helton and it looks like they already have their sights set on Cincinnati’s Luke Fickell. Who will be the next USC head coach after the Trojans fired Clay Helton?. If AD Mike Bohn gets his way, it’ll be someone he’s very...
COLLEGE SPORTS・3 DAYS AGO
FanSided

Colin Cowherd’s takeaways from USC football’s season opener against San Jose State included scathing criticism of Clay Helton’s head coaching tenure. Colin Cowherd is an LA guy. He’s been around the USC football program for a long time, so when he comments on the Trojans, you know he means it.
COLLEGE SPORTS・12 DAYS AGO
PennLive.com