By Olafimihan Oshin
Posted by
The Hill
12 days ago 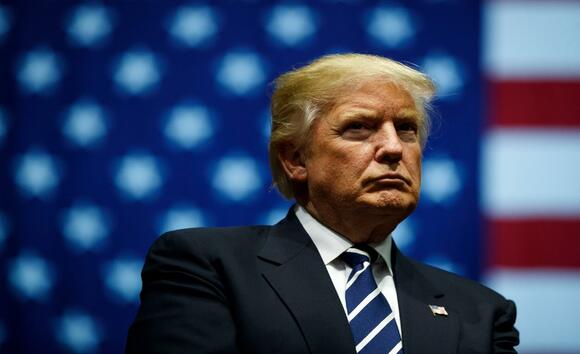 A Trump supporter is refusing a New Jersey judge’s order to take down her anti-President Biden banners, The New York Times reported Tuesday.

Andrea Dick, a supporter of former President Trump , said she started hanging banners that displayed crude remarks toward Biden at her mother’s residence in Roselle Park, with one of the signs reading “Don’t Blame Me / I Voted for Trump.”

She added that her neighbors started to make complaints about the crude manner of her banners, specifically expressing concern about the fact that Dick lives close to a school, according to The Times.

Dick, 54, refused to take her banners down after local officials, citing an anti-obscenity ordinance, asked her to do so. She was subsequently fined and summoned to a court appearance.

“It’s my First Amendment right, and I’m going to stick with that," Dick said in an interview with the Times.

Roselle Park mayor Joseph Signorello III told The Times that he received complaints about Dick’s banners, saying that the town’s decision to remove them wasn’t “about politics in any way,” noting that they would do the same thing if a resident hung crude banners about Trump.

Dick’s situation comes as incidents involving pro-Trump banners and flags have flared up in various states, including New York, Connecticut, Indiana and Tennessee.

Dick has said she will not follow the judge’s orders to remove her banners, stating she is looking for a new attorney to battle the issue, the Times noted.

“I’m not backing down,” Dick said.

Glenn Allen Brooks texted selfies of himself inside the Capitol to a church prayer chat group, a DOJ criminal complaint said.

The ex-president’s refusal to accept defeat is taking a toll on the party in a key battleground state.

Should this flag fly? Homeowners have no plan to take down flag swearing about President Biden

The homeowners say it's their right to express their beliefs.

A number of political groups associated with former President Trump have spent tens of thousands of dollars at properties owned by the ex-president in the months after he was voted out of the White House, according to a report from The Washington Post. The Trump PAC Save America spent at...

It appears that The New York Times has shifted its enforcement of the paper's social media guidelines for its employees as the reporter who attacked millions of Trump voters has skated while a freelance editor was fired earlier this year after making a pro-Biden tweet. The Times has been radio...

Trump-boosting pillow magnate Mike Lindell, whose company MyPillow is one of Fox News’ largest advertisers, said on Thursday night that he is pulling his commercials from the network because they won’t run a commercial pushing baseless claims of voter fraud in the 2020 election. The Wall Street Journal was the...

Did Trump follow his pledge to donate the last 6 months of his presidential pay? It’s a mystery.

Donald Trump promised to give away his $400,000 presidential salary. And he kept that promise, publicly announcing each gift — at least, for his first 3½ years in office. Then, in the middle of last year, the announcements stopped. Trump’s White House never said where — or even if —...

An Arizona GOP state senator who backed the election audit withdrew her support, attacking the process as botched

"I supported the audit, but I do not support the Trump audit any longer," said Sen. Michelle Ugenti-Rita.

President Joe Biden is pushing through nominees for federal and appellate court judges at a faster pace than any of his recent predecessors, including Donald Trump and Barack Obama. Biden and Senate Democrats have confirmed eight judges already, including a potential Supreme Court pick, Ketanji Brown Jackson, to federal appeals...

The American Civil Liberties Union (ACLU) is reviving a lawsuit challenging the government's use of a public health authority to quickly expel people crossing the Southern border, preventing them from seeking asylum. The suit was filed against the Trump administration, and the ACLU agreed to stall it when President Biden...

The DOJ has announced it will not use its powers to try to shield Trump administration veterans from testifying to Congress about the January 6th insurrection and Trump’s efforts to overturn the election. MSNBC’s Chief Legal Correspondent Ari Melber is joined by Obama veteran Neal Katyal to discuss how this reduces the veterans’ ability to duck accountability and what this means for citizen Trump himself.July 28, 2021.

Biden’s judges: More diverse and more of them

WASHINGTON (AP) — With no Supreme Court opening to slow them, President Joe Biden and Senate Democrats are putting judges on federal trial and appellate courts at a much faster clip than any of Biden’s recent predecessors, including former President Donald Trump. Eight judges already have been confirmed, including potential...

Top House Democrats on Sunday called on the Biden administration to extend the eviction moratorium amid the coronavirus pandemic, hours after the ban expired, putting millions of Americans at risk of being forced out of their homes. “Action is needed, and it must come from the Administration. That is why...

This week, Senate Republicans earnestly fought to save a massive $1.2 trillion infrastructure deal, worried that if it fell through, they’d be labeled the “party of no” by the media and be blamed by their constituents for not working to repair the broken roads, bridges and buildings in their respective hometowns.