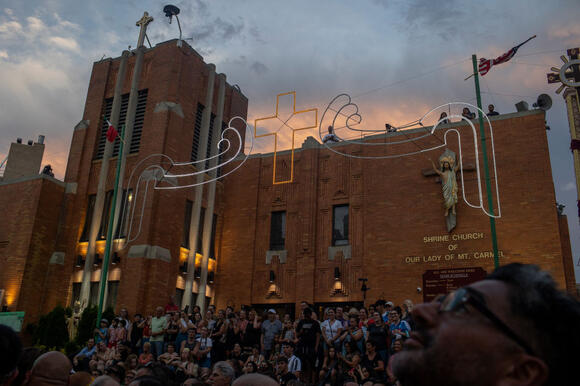 The coronavirus pandemic was largely responsible for shaving a year and a half from the life expectancy of Americans in 2020, the steepest drop in the United States since World War II, according to federal statistics released Wednesday.

An American child born today, if they hypothetically lived their entire life under the conditions of 2020, would be expected to live 77.3 years, down from 78.8 in 2019. That is the lowest life expectancy since 2003, according to the National Center for Health Statistics.

Measuring life expectancy is not intended to precisely predict actual life spans; rather, it is a measure of a population’s health, revealing either society-wide distress or advancement. In recent decades, life expectancy had steadily risen in the United States until 2014, when an opioid epidemic took hold and caused the kind of decline rarely seen in developed countries. The decline had flattened in 2018 and 2019.

The precipitous drop in 2020 caused largely by COVID-19 is not likely to be permanent. In 1918, the flu pandemic wiped 11.8 years from Americans’ life expectancy, but the number fully rebounded the following year.

But even if deaths from COVID-19 fall off, the economic and social effects of the pandemic will linger, especially among racial groups that were disproportionately affected, researchers have noted.

Life expectancy in the U.S. dropped by a year and a half in 2020, marking the biggest fall since World War II. Carrying the bulk of the blame, as the Associated Press pointed out in their report on the latest CDC figures on Wednesday, is COVID-19. The CDC’s National Center...

US life expectancy decreased by 1.5 years during the pandemic – the largest drop since WWII

The United States saw the largest one-year drop in life expectancy since World War II during the COVID-19 pandemic, and Hispanic and Black populations saw the largest declines, according to government data released Wednesday. Life expectancy at birth declined by 1.5 years in 2020 to 77.3 – the lowest level...

Coronavirus: US life expectancy plunged 1.5 years in 2020 amid COVID-19 pandemic

WASHINGTON — Federal data released Wednesday confirmed that average life expectancy in the United States decreased by a year and a half in 2020, driven primarily by the COVID-19 pandemic. The decline represents the largest single-year life expectancy reduction since World War II and reflects clearly the coronavirus’ disproportionate impact...

July 21 (Reuters) - Life expectancy in the United States fell by a year and a half in 2020 to 77.3 years, the lowest level since 2003, primarily due to the deaths caused by the COVID-19 pandemic, a U.S. health agency said on Wednesday. It is the biggest one-year decline...

Although James Toussaint has never had COVID, the pandemic is taking a profound toll on his health. First, the 57-year-old lost his job delivering parts for a New Orleans auto dealership in spring 2020, when the local economy shut down. Then, he fell behind on his rent. Last month, Toussaint was forced out of his apartment when his landlord — who refused to accept federally funded rental assistance — found a loophole in the federal ban on evictions.

If You Did This After Your First Shot, You're at Risk for the Delta Variant

We have highly effective COVID-19 vaccines to thank for bringing infections down to their lowest levels since the pandemic began. Now, the highly contagious Delta variant is posing a new threat as it spreads as the dominant strain of the virus in the U.S., leading health officials to urge those who are unvaccinated to get their shots as soon a possible. But a new study is warning that if you did this one thing after getting your first shot of the COVID vaccine, you could be at serious risk for catching the Delta variant. Read on to see what the latest research has found.

The blunt truth about vaccination

From social security to polio vaccines to drivers licenses and the draft, the United States has a long history of requiring citizens to participate in programs that help all of us, writes Julian Zelizer. Thinking of the common good is patriotic, as American as apple pie--part of what ACTUALLY makes America great.

Nearly a month after two dozen GOP-led states started cutting the federal government's $300 enhanced weekly benefit for the unemployed, Morgan Stanley economists say the move—which critics have called politically (and not economically) motivated—hasn't done much to help the struggling labor market, lending little credence to the argument that ending the benefits early would accelerate a recovery by encouraging Americans to return to work.

COVID cases are on the rise and mostly due to the more contagious Delta variant. Not only Delta is substantially more contagious than the alpha variant, but it has also been linked to breakthrough cases. While vaccines are still highly effective at preventing moderate and serious disease, there have been reports of waning immunity amongst fully vaccinated individuals. There isn't reason for alarm as most cases are mostly of mild disease and asymptomatic. In efforts to preventing any infection with COVID, CDC now updated the guidance to wear face masks indoors.

"Am I going to get a vaccine? No," Scott Roe told a CBS News reporter from his hospital bed in Baton Rouge.

Despite President Joe Biden's recent warning of short-term inflation, an ongoing petition for monthly stimulus checks of $2,000 has continued to gather signatures over the past week amid a spike in COVID-19 cases. Denver restaurant owner Stephanie Bonin created the Change.org petition last year, which calls for the U.S. House...

If You See This Mark on Your Skin, Call 911, Experts Say

As the largest organ in your body, your skin can tell you a lot about your health. But given that a range of rashes look more or less the same to the untrained eye, it may be difficult to distinguish between skin symptoms that are serious and those that are superficial. That's why doctors are sounding the alarm about one particular skin symptom, which they warn can be a sign of a major medical emergency. When this type of rash appears, they say that time is of the essence before this life-threatening condition progresses past a point of no return. Read on to learn what to look out for.

What Are the Symptoms of Delta Variant COVID, and How Do They Vary From Traditional COVID?

After months of progress and “good news” on the COVID front, things are beginning to change. The infection rate is increasing, and in many locations, the number of hospitalizations is beginning to climb. Of course, the reason for this shift could be contingent on a variety of factors. The vaccination...

Pfizer says immunity can drop to 83% within four months in people who got its COVID-19 shot, further bolstering the company case for a booster

The effectiveness of Pfizer’s COVID-19 shot can drop to 83.7% within four to six months after getting the second dose of its vaccine. This is the latest indication that vaccine-induced immunity to the virus can wane and some kind of boost may be necessary in the future.

Stimulus Checks Fourth Round To Be Approved By August?

Stimulus checks in the previous round had been approved nearly about four months back from now, and it was the largest round which paid out at $1,400 per family, who are eligible Americans. Since the rolling out of the payments, a sharp decline in the hardship rates was observed. However, the effect caused by the impact payments and rolling out stimulus checks can be seen to be fading.