Makur Maker out of NBA Draft, not returning to Howard 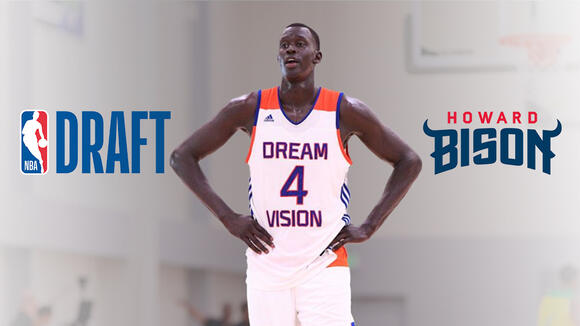 Makur Maker isn’t entering the NBA Draft — but he’s not coming back to Howard University either.

The former five-star recruit announced on Tuesday evening that he will be withdrawing from the NBA Draft, citing that he’s not a first round pick. The reason he says teams are telling him he’s not is because Howard’s season was canceled in January, and they don’t have enough film on him.

“I’ve withdrawn from the 2021 NBA Draft,” he said in statement released on Twitter. “My goal has always been to be a top pick in the NBA. The feedback from NBA teams is that, because my college basketball season at Howard University was canceled, I’m a 2nd round pick at this time. They just don’t have enough data to select me in the 1st round at this time.

The way Maker sees it, he can’t risk that happening again.

“COVID-19 has been a 2-year challenge for me,” he continued. “I won’t allow it to change my goals. I couldn’t return to Howard with even the slightest chances of not having a season.”

“With that being said, I will continue to work hard and play professionally next season with the focus and goal to be the top pick in the 2022 NBA Draft.”

Howard has not indicated publicly that it has any plans of not having a season. Last season came to a halt after several players, including Makur Maker, contracted COVID-19.

That was a disappointing moment after the hype and discussion of his commitment generated last summer. In all, Makur played two games for Howard, never in front of the home crowd at The Burr or another HBCU for that matter.

The post Makur Maker out of NBA Draft, not returning to Howard appeared first on HBCU Gameday .

if he was a top draft pick. they would of drafted him no matter what college he went to...

It's not a secret that Ben Simmons will likely be moved before the start of the 2021/22 NBA season. The 3-time All-Star has yet to show up for training camp, and things are not right in Philadelphia. It seems like the duo of Joel Embiid and Ben Simmons will not be the key to delivering a championship to the City of Brotherly Love.
NBA・17 DAYS AGO
basketball-addict.com

The Golden State Warriors aren’t done making changes in the crew. Now, Stephen Curry and Klay Thompson will get even more help for the upcoming season with the latest addition to the squad. The Warriors front office isn’t just focusing on the players’ roster but on the coaching staff as well. Following the recent changes […] The post Stephen Curry, Klay Thompson get more help with latest Warriors addition appeared first on ClutchPoints.
NBA・11 DAYS AGO
AllPacers

After pulling off an incredible fashion statement, Los Angeles Lakers star Russell Westbrook is now being accused by former Kansas City Chiefs running back Larry Johnson of performing an illuminati ritual. Russell Westbrook went viral on social media after showing up to the Thom Brown Spring 2022 show during New...
NBA・9 DAYS AGO

Rumors around the future of Ben Simmons are heating up at the moment. In the last few days, multiple reports have emerged that Simmons is going to be traded by the 76ers. Simmons has been on the trading block for quite some time. Despite a strong regular season for Simmons, another poor showing in the postseason has sealed his fate, and he will most likely be leaving the 76ers.
NBA・24 DAYS AGO
fadeawayworld.net

Former NBA All-Star Theo Ratliff On Ben Simmons: "I Just Don't Get Him Refusing To Actually Shoot A 10-Foot Jumper."

76ers star Ben Simmons has been through the wringer over the past few months. Since putting his shooting struggles on full display in the 2021 playoffs, Ben has been heavily criticized by the masses, with fans calling his work ethic and commitment to the team into question. And while Ben...
NBA・19 DAYS AGO
Yardbarker

Carmelo Anthony wanted to return to the Trail Blazers before signing with the Lakers, Chris Haynes of Yahoo Sports writes. Anthony has spent the last two years in Portland but said that management never contacted him about a return. “No, not the way I thought. But honestly, I wasn’t expecting...
NBA・9 DAYS AGO
Sportsnaut

Portland Trail Blazers rumors are flying early in their offseason, which came earlier than the franchise had hoped after they
NBA・8 DAYS AGO

In the instant-analysis culture of today's sports media, many expect to know who won the NBA draft the moment it's over. NBA teams are immediately graded on every pick they made. It's the nature of the business, but you can't know how wise a selection was until some time passes....
NBA・12 DAYS AGO
saturdaydownsouth.com

Michigan State went down to Miami on Saturday afternoon and pulled away late, earning a big 38-17 road victory. It has been a rough year for the Hurricanes, who were walloped by Alabama in Week 1 and barely escaped an upset bid by Appalachian State in Week 2. And, to...
MICHIGAN STATE・6 DAYS AGO
Blazer's Edge

The NBA draft is when dreams come true–when players realize that all their hard work has finally paid off. Athletes can take care of the family members who’ve helped them along the way, and it’s the beginning of a long journey that will create memories that will last a lifetime. In an exclusive interview with ClutchPoints, Boston Celtics guard Aaron Nesmith shared a few memories from his first year in the NBA, on Dwyane Wade and many other topics.
NBA・13 DAYS AGO

Some of you might have been up at midnight waiting to get your hands on the latest entry in the NBA 2K series, but for those who might be unaware: NBA 2K22 is out now on Nintendo Switch. This year’s installment offers a refreshed “tactical offense” as well as “an overhauled defense,” which in turn ups the challenge and sense of immersion. You can glimpse the gameplay in this launch trailer:
VIDEO GAMES・14 DAYS AGO
FanSided

Luka Garza was the No. 52 overall pick in the NBA Draft and worked hard to get a two-way contract from the Detroit Pistons. The player selected right after him, Charles Bassey, is going a much different route, holding out for a multi-year NBA contract. Even though he was the...
NBA・11 DAYS AGO
Yardbarker

NBA 2K22 dropped last Friday and fans have been discussing about the game ever since. While it has certainly been a good update according to many, the ratings of players have always been a huge point of discussion and similar has been the case for NBA 2K22. This time, it's...
NBA・13 DAYS AGO
Ridiculous Upside

Revisiting The 2021 NBA Draft: From Seniors to Freshmen

If you are an avid reader of Ridiculous Upside, you probably know what the 247Sports Composite Rankings are and how they have been more or less reliable in order to predict where players are picked in the different NBA drafts and how they have performed over their careers. As no...
NBA・13 DAYS AGO
chatsports.com

You can read Part I of our CelticsBlog Fantasy Draft here where we picked our first two players from Boston’s current roster. Here are picks 3-5 to round out the teams. Will Bjarnar: I’m zagging from my previously articulated philosophy now, because though I know I’m going to want a big man at some point, I’m hoping that with their current lineups, Bill and Adam are bound to avoid picking the guy I have in mind. (And as everyone knows, laying out your strategy for your competition to openly see and thus thwart is a brilliant idea.
NBA・15 DAYS AGO
chatsports.com

CHARLOTTE, NORTH CAROLINA - MAY 02: Bam Adebayo #13 of the Miami Heat brings the ball up court against the Charlotte Hornets during their game at Spectrum Center on May 02, 2021 in Charlotte, North Carolina. NOTE TO USER: User expressly acknowledges and agrees that, by downloading and or using this photograph, User is consenting to the terms and conditions of the Getty Images License Agreement. (Photo by Jacob Kupferman/Getty Images)
NBA・11 DAYS AGO
FanSided