By Lexi Lonas
Posted by
The Hill
12 days ago 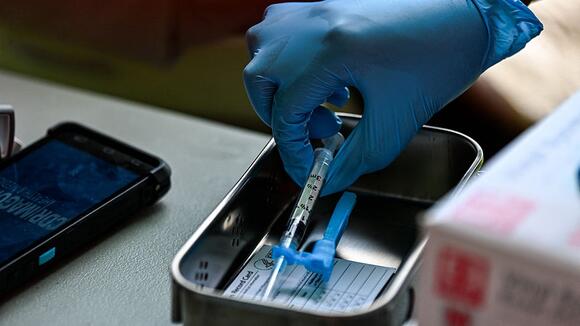 An Alabama doctor is opening up about her experience treating those hospitalized for the coronavirus amid a resurgence of cases, saying dying patients are asking her to vaccinate them.

“One of the last things they do before they're intubated is beg me for the vaccine. I hold their hand and tell them that I'm sorry, but it's too late," Brytney Cobia, a hospitalist at Grandview Medical Center in Birmingham, wrote on Facebook this week.

“A few days later when I call time of death, I hug their family members and I tell them the best way to honor their loved one is to go get vaccinated and encourage everyone they know to do the same,” Cobia added.

Alabama has one of the lowest vaccination rates in the country, with only 33 percent of its population fully vaccinated, according to data from John Hopkins University.

Cobia listed all the different reasons she heard from patients and their families about why they didn’t get the vaccine.

Cobia told AL.com that even though she knows the people made the choice to not get vaccinated, it is hard on medical professionals watching people die from the virus that could have been prevented.

“You kind of go into it thinking, ‘Okay, I’m not going to feel bad for this person, because they make their own choice,’” Cobia said. “But then you actually see them, you see them face to face, and it really changes your whole perspective, because they’re still just a person that thinks that they made the best decision that they could with the information that they have, and all the misinformation that’s out there.”

The White House recently called out social media companies, saying the misinformation on the platforms about the vaccine has led to people dying.

The delta variant of the coronavirus is causing a new spike in cases around the country, with the vast majority of those hospitalized or dying being unvaccinated.

Thousands thought they were getting the Covid vaccine. They were injected with salt water instead

New Delhi (CNN) — Thousands of people have fallen prey to an elaborate wide-ranging scam selling fake coronavirus vaccines in India, with doctors and medical workers among those arrested for their involvement, authorities say. At least 12 fake vaccination drives were held in or near the financial hub Mumbai, in...

A man from Austin who received the Johnson and Johnson COVID-19 vaccine back in March is now in intensive care at Baylor Scott and White in Temple battling a severe case of the coronavirus. Isaac Carey, 64, an Austin veteran, who according to his website has been an Uber driver...

A MUM-of-two who refused the Covid vaccine over fears of side effects, died after catching the Delta variant. Tricia Jones, 45, was hesitant about getting the jab after hearing news reports about people suffering rare side effects like blood clots or heart inflammation. 🔵 Read our coronavirus live blog for...

"Am I going to get a vaccine? No," Scott Roe told a CBS News reporter from his hospital bed in Baton Rouge.

A mom is urging people to be vigilant about COVID-19 after she caught the virus months after being vaccinated.

More than 33 million people in the UK are now fully vaccinated against Covid-19 and over 45 million have received their first dose of a coronavirus jab. Vaccinations are key to prevent deaths or serious illness and have proven to reduce the number of hospitalisations. But while being vaccinated gives...

A 17-year-old student who received the Pfizer coronavirus vaccine in order to attend school and play soccer was diagnosed with heart issues soon after the shot, his father explained Tuesday on "Fox & Friends." "A week later, he came home and started telling me that his heart was hurting every...

My husband had a stroke after his COVID vaccine. We gave our kid his shot anyway

A few days after receiving his second COVID vaccination, my husband woke up seeing double. He’d been feeling unwell, but this new symptom seemed odd. Should we come in to urgent care, we asked our doctor. No, the emergency room, we were told. Twelve hours later, a brain MRI showed...

COVID cases are on the rise and mostly due to the more contagious Delta variant. Not only Delta is substantially more contagious than the alpha variant, but it has also been linked to breakthrough cases. While vaccines are still highly effective at preventing moderate and serious disease, there have been reports of waning immunity amongst fully vaccinated individuals. There isn't reason for alarm as most cases are mostly of mild disease and asymptomatic. In efforts to preventing any infection with COVID, CDC now updated the guidance to wear face masks indoors.

(CNN) — Catt Sadler is sounding the alarm that people still need to be careful with Covid-19. The entertainment reporter posted a trio of photos on Instagram account, one showing her apparently sick in bed. She started the caption off by writing, "This is important. READ ME:" "I'm fully vaccinated...

'Just get the stupid shot': Unvaccinated mom who got Covid-19

After choosing not to get the Covid-19 vaccine, Ganeene Starling ended up in the ICU with coronavirus and was given a 20% chance of survival by doctors. Starling speaks with CNN’s Randi Kaye about her experience.

Ex-nurse didn't get vaccinated, then she was hospitalized with Covid-19. Hear her message

A handful of states have been driving the bulk of the nationwide surge of Covid-19 cases and many of those cases are unvaccinated people. CNN’s Miguel Marquez reports.

A conservative talk-show host who said 'you're probably safer not getting' the vaccine is now seriously ill with COVID-19, and his family is asking people to 'PLEASE GO GET VACCINATED!'

Now that Phil Valentine has become ill with the coronavirus, he has "regrets" about not being more "pro-vaccine," his family said.

Agoraphobic man, 33, who 'wanted to get Covid vaccination' but was too worried to leave the house dies in intensive care after nine-day battle with the virus

An agoraphobic man who would have got the Covid-19 vaccination but struggled to leave the house died in intensive care from the virus before he could get jabbed. Brendon Jones died at North Manchester General Hospital in Crumpsall earlier this month after battling coronavirus for around nine days. The 33-year-old,...

A 28-year-old man in Alabama who believed COVID-19 was a “hoax” has died from the virus — and now his family is urging people to get the vaccine. Curt Carpenter lost his battle with the bug after spending 51 days in the intensive care unit at Grandview Medical Center in Birmingham, the Montgomery Advertiser reported.

Abderrahmane Fadi from Bradford, England, told the BBC he regrets turning down multiple chances to get vaccinated before he was hospitalized.

Local doctors: All unvaccinated people will eventually get some form of COVID

An intensive care doctor working in the heart of Sydney's Covid outbreak has warned that hospital beds are filling up fast and nearing capacity, with more and more young people being admitted. Dr Timothy Southwood said a dedicated ICU ward set up to treat coronavirus patients at the Royal Prince...