Posted by
ABC News
12 days ago 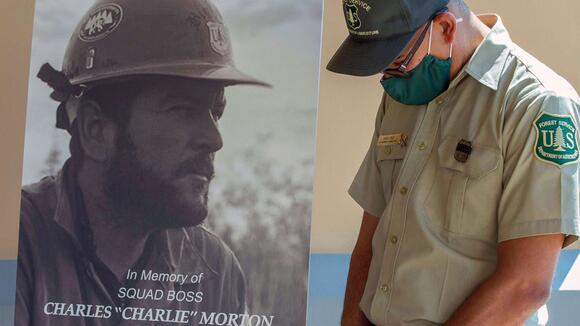 A couple whose gender reveal celebration triggered the El Dorado Fire in California last year that killed a firefighter and left 13 injured has been charged.

The El Dorado Fire sparked on Sept. 5, 2020, when the couple and their young children set off a smoke bomb at a gender reveal ceremony at El Dorado Ranch Park in Yucaipa, at the foot of the San Bernardino Mountains.

MORE: Much of US under ominous, hazy sky as smoke spreads from Western wildfires

The device ignited dry grass on the hot day, authorities said. Despite trying to douse the flames with a water bottle, strong winds fanned the fire and it ripped through the wilderness and national forest land, fueled by extremely dry conditions, Cal Fire said at the time.

The fire burned over 22,000 acres across San Bernardino and Riverside counties and forced the evacuations of hundreds of residents, officials said.

"He's fighting a fire that was started because of a smoke bomb -- that's the only reason he's there," Anderson said.

The defendants were arraigned in court on Tuesday and entered not guilty pleas. They were released on their own recognizance.

If convicted on all counts, they could face sentences in the "lower teens to low twenties" in terms of years, Anderson said.

The charges for the couple are seen as a warning to others as much of the western U.S. remains hot and dry, with wildfires still spreading and more than 18 million Americans under heat alerts .

ALSEA, Ore. - Two men faces accusations they intentionally tossed a firework from a car on July 4, sparking a brush fire that burned on both sides of Highway 34, the Benton County Sheriff's Office said. The investigation started the afternoon of Independence Day when deputies responded to the fire.

Two people were found dead inside a crashed car linked to two California teenagers who have been missing for nearly a week, authorities said. Officials in Los Angeles County have been on the hunt for Ethan Manzano and Sophia Edwards, both 19, since July 1, when they were last seen driving a 2007 Isuzu Ascender near Angeles Crest Highway in the Angeles National Forest, the Los Angeles County Sheriff's Department says in a statement to PEOPLE.

San Marcos, Texas – A Guadalupe County court-at-law judge was “heavily intoxicated” and in an enraged state when he forced his way into a home, striking his baby son with a door, arrest affidavits released to the KSAT 12 Defenders show. Judge Bill Squires, 46, was charged late Thursday with...

An Arizona teen that was missing for two days has been found dead in a parked car. 17-year-old Itzel Espinoza left her home to spend time with friends on Thursday, and when she did not return home her parents reported her missing to the police. According to AZFamily, the police...

COLUMBUS, Ohio (WSYX) — The Franklin County Sheriff's Office is now investigating a female inmate's death after she was found unconscious last month in a holding cell inside the Franklin County Correctional Center on Jackson Pike. "How does she go from being fine and well on Friday to being dead...

A 2-year-old California boy who disappeared after his mother was slain has been found safe in Las Vegas, authorities said. The California Highway Patrol issued an Amber Alert on Monday evening for Celestine Stoot III after the Riverside County, California, Sheriff’s Department said the toddler was reported missing from a Lakeland Village home where his mother, Natasha Denise Barlow, 43, of San Jacinto, was found dead.

Twelve people were arrested Tuesday, July 13, in Orange and Riverside counties on suspicion of being involved in a ring that distributed at least $2 million in heroin, authorities said, with customers using code words to place orders to employees, often in Santa Ana, on cell phones. Seven others were...

A man in India allegedly cut off the nose of his wife after the two got into a fight. The woman's mother attempted to stop him but was also attacked by the drunk man. Police have launched a search for the man, who reportedly absconded after the incident. A drunk...

Teen dies after jumping out of car during fight with mom, authorities say

A 15-year-old girl jumped out of a moving car during an argument with her mother on a Texas highway — and was fatally struck by another vehicle, authorities said. The grisly chain of events unfolded on Interstate 45 in Harris County late Monday, sheriff officials told The Post. The teen’s...

Oklahoma police arrested a woman after her 12-year-old daughter gave birth – and the family welcomed the child’s rapist to a baby shower. Tulsa police said mom Desiree Castaneda and other family members knew about the victim’s relationship with 24-year-old Juan Miranda-Jara, who was reportedly surprised when he was arrested July 14 as he accompanied the 12-year-old to the hospital where she delivered.

Communal peacock shot and killed after hit taken out on Craigslist

A well-known, communal peacock in the Azalea Heights neighborhood of California was found shot and killed on June 30. On June 13, an ad appeared on Craigslist looking to “get rid of a wild peacock that is disrupting our lives by any means necessary.”. The Humboldt County Sheriff’s Office is...

Girl, 15, Dies After Jumping Out Of Moving Car During Argument With Mom: Police

The accident happened on I-45 at around 9 p.m. ET Monday. No further details regarding the victim were immediately available. A Texas teen girl jumped out of a moving car while fighting with her mother and died after she got struck by an unknown vehicle, police said. Harris County deputies...

At least 30 people, including eight inmates and two sheriff's deputies, have reportedly been injured in a possible prison riot in Southern California that authorities are calling a 'mass casualty event.'. A spokesperson for the Los Angeles County Sheriff's Department told the Los Angeles Times that 'several inmates and a...

Two bodies found earlier this month below a cliff in the Angeles National Forest have been identified as a missing teenage couple, officials say.

'Ghost-Like' Sighting In California Mountains Being Investigated By Police

A family's recent experience with a ghost-like sighting in the mountains is prompting an investigation by the Madera County Sheriff's office. Jake Gorba, Victoria, and their three kids were taking their four-wheeler up to Shuteye Peak. When the family stopped to eat lunch, the couple noticed their three-year-old Kaiden talking to someone.

A California mother and her 14-year-old son have been arrested after the son “accidentally” shot his toddler half-sister. Thirty-seven-year-old Veronica Pyatt, the teen, and Pyatt’s 20-month-old daughter were in a vehicle in San Bernardino Tuesday afternoon, San Bernardino police said. The teen was “manipulating a loaded firearm in the back seat” of the vehicle, police said. The gun discharged, striking the toddler in the right upper leg.

Albuquerque couple who left daughter in bathtub in trouble again

ALBUQUERQUE, N.M. (KRQE) – The Albuquerque parents who admitted to leaving their daughter in a bathtub before she died and then burying her, are in more trouble. Monique Romero and David Zuber are back behind bars. According to police, the death of their one-year-old daughter, Anastazia, did not inspire Romero or Zuber to turn their lives around.

LOS ANGELES (CBSLA) – An LA County inmate who walked away from a minimum-security camp near Sacramento Saturday was apprehended Sunday. Staff discovered 25-year-old Edgar Benitez missing from his assigned housing at the Growlersberg Conservation Camp in El Dorado County Saturday night around 11 p.m., according to the California Department of Corrections and Rehabilitation. Authorities immediately conducted a search of the grounds. The state Department of Corrections and Rehabilitation’s Office of Correctional Safety said he was found in front of a Modesto home at 4:30 p.m. Sunday. Benitez, who was received from LA County on December 26, 2017, was sentenced to nine years for driving under the influence causing bodily injury or death. He will be taken to transported and rehoused at Sierra Conservation Center and his case will be referred for consideration fo charges, corrections officials said.

Family members say 42-year-old Brandi Urena was the victim in the crash. She was a mother of five and worked for United Health.