Actress Tia Mowry is proud to be a part of an industry that recognizes her talents. However, the former child star is even prouder to belong to a family with a unique and diverse background.

Tia and her three other siblings - twin sister Tamera, Tahj, and Tavior - have interracial parents. Their mother, Darlene Mowry, is of Black descent, while their father, Timothy Mowry, is a white German national. 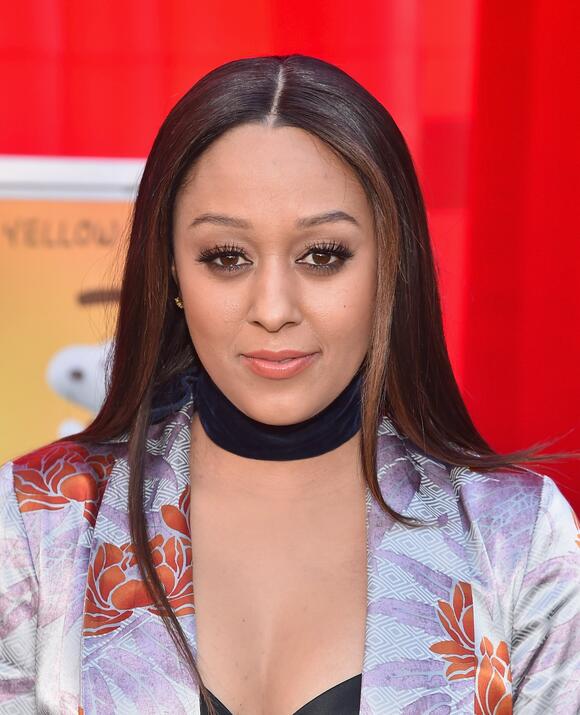 Between their parents, Tia seems to be Timothy's lookalike. The 43-year-old TV actress shared two never-before-seen pictures of her father during their recent vacation in Maui, Hawaii. She wrote in the caption:

"The last time we were in #hawaii together as a family was when I was a kid!"

The first picture proved that she and her youthful father share remarkable features. Tia, who donned a floral top, shades, and long braids, smiled beside her dad, who looked dapper in a black shirt and shades.

"You look like him!!!" a fan exclaimed. More of Tia's followers commented that she and her dad share the same smiles, while another remarked that the TV star's 10-year-old son Cree inherited Timothy's looks as well.

"The Family Reunion" star added that her father has better privileges compared to her mother.

Tia's dad flashed a smile in the second photo while leaning by the black railings with different kinds of trees sprawling in the background. The white clouds and blue skies added beauty to his delightful snap.

Besides reminiscing the family's good old days, Tia thanked Timothy for being the best grandfather to her son and daughter, Cairo, 3. Being able to watch him build relationships with her kids is bringing her much joy.

Like her little ones, Tia shares a good bond with her father even if the latter is already distant from her mother. Her sister, Tamera, revealed in 2019 that Darlene and Timothy have been divorced for several years.

The former couple is peacefully living their lives separately. Tamera also revealed that her father has a girlfriend named Nana, while her mother has been very private about her love life.

Timothy stayed in a luxury resort in Hawaii with Tia's family to celebrate his daughter's milestone. It was a smooth birthday celebration for the twins, and they had no complaints about their setup.

No longer together, they continue to show their support to Tia and Tamera's careers. They accompanied their famous daughters on several out-of-town trips when they were still starting out in the industry around 1990.

Sadly, Darlene and Timothy's biracial relationship at the time raised eyebrows. Growing up in a mixed-race family, Tia shared last year that she noticed people treated her mom and dad differently.

"The Family Reunion" star added that her father has better privileges compared to her mother. Tia recalled how some individuals would directly cast judgment on Darlene because of her race and skin color.

With racism continuing to this day, Tia hopes to see a real change in the future. As a mother of two, she teaches her children about the rich culture and history of the Black community.

Tia, who's married to actor Cory Hardrict, welcomed Cree in 2011 and Cairo in 2018. After giving birth, she shared she once had unhealthy thoughts about her post-partum body, but she has since embraced her imperfections.

Why couldn’t the article just say ‘Tia Mowery on Hawaiian vacation with her Dad?’ 🙄. This race thing is getting out of hand

I'm taken back with the editors words "uncanny" that she looks like her Father. I would be insulted if I were the twins, Mother and Father. Editor, just because a parent is White does not mean a Black child cannot look like their White parent.

How is it that Tim is a “white German national” when in fact he was born in Miami FL and was in the service and served in the military and was stationed in German, why can you not get even the smallest facts right?

Nia Long, who starred as Bird in "Soul Food," may not be married, but she is enjoying her time with her longtime lover and the father of her second son. See how they look adorable while posing side by side during their time at the US Open. "Soul Food" star...
CELEBRITIES・3 DAYS AGO
Amomama

Monica Calhoun became popular after playing Mia in "The Best Man," but these days, the 50-year-old enjoys life as a single mom, caring for her special needs son. Monica Calhoun has gone about her life as a single mom to her blind son with pride. However, the actress does not seem to have let things get in her way, as she recently shared a new picture showing she still has her groove.
CELEBRITIES・1 DAY AGO
Amomama

Hollywood star Omar Epps has been married to his singer wife Keisha for 16 years, and their love only continues to grow as time passes by. Star actor Omar Epps is known for his sterling roles in Hollywood's blockbuster movies, and he has also earned for himself some accolades. However, behind the scenes, Epps is a family man who shares his love life with Keisha Spivey Epps, his wife of 16 years.
BROOKLYN, NY・3 DAYS AGO
Amomama

Girl Inherits House from Granny She Never Knew, Arriving There, She Finds Something Priceless — Story of the Day

When I turned twenty-one, I discovered I'd received an inheritance and it changed my life. On the day I turned twenty-one, what should have been a joyous celebration with my parents turned into a screaming match with my father after a FedEx delivery man knocked on our door. "Delivery for...
FAMILY RELATIONSHIPS・2 DAYS AGO

Beyoncé is notoriously private when it comes to her family life but delighted fans on Monday after sharing a rare photo with her youngest daughter Rumi. The Black Parade hitmaker took to Instagram to share a series of snapshots from her vacation, and it looked liked they were having the best time!
CELEBRITIES・4 DAYS AGO
Amomama

Bobby Brown and his oldest daughter Bodhi with his manager wife spent some fun time with their dogs indoors, and they playfully posed, showing their striking resemblance to each other. Iconic musician Bobby Brown seems to be aging backward and is still youthful in appearance and actions. The celebrity, who...
PETS・13 DAYS AGO
Amomama

Famous actress Angela Robinson recently shared a lovely snap of her little boy on his first day of pre-school, and fans could not help but gush over his sweet looks, especially his afro hair. Motherhood means a lot to “The Haves & the Have Nots” star Angela Robinson, and a...
CELEBRITIES・1 DAY AGO
Hello Magazine

Oliver Hudson constantly leaves fans in splits with his hysterical posts and moments on social media, and he did just that with a rare photograph he shared. The actor posted an incredible throwback picture of himself as a young boy at an event with his mom, Goldie Hawn, and his younger sister, Kate Hudson.
CELEBRITIES・1 DAY AGO

Tia Mowry once opened up about growing up biracial, having a Black mom and White father. She also compared how racism has affected her life both as a child and now that she has her own family. Tia Mowry and the rest of her siblings grew up in a biracial...
CELEBRITIES・9 DAYS AGO
Amomama

"Sister, Sister" alum Tia Mowry shows gratitude for being a part of a successful and happy family— the Mowry clan. In her recent upload, she celebrated four generations of women in the family via rare photos and a message. Tia Mowry and her twin sister Tamera Mowry of the evergreen...
FAMILY RELATIONSHIPS・14 DAYS AGO
Hello Magazine

Elle and Dakota Fanning were in mourning on Tuesday following the very sad death of a very special family member. Their beloved grandfather and sporting legend, Rick Arrington, passed away and they both paid tribute to him with emotional Instagram messages. Elle took to social media with a photo of...
NFL・3 DAYS AGO
TVShowsAce

Sister Wives star Paedon Brown drops a bunch of rare family photos on his Instagram recently. One of the reasons that Sister Wives fans may not see Paedon as often as some of Christine Brown’s other children is because he is in the Army. It is likely that Paedon stays busy and moves around a lot. Keep reading to find out more about Paedon and his family photos.
FAMILY RELATIONSHIPS・10 DAYS AGO

Sister Sister quickly became a fan favorite in the early '90s, eventually growing into a show fans would like to see revived all these years later. Stars Tia Mowry-Hardrict and her twin sister Tamera Mowry-Housley won the hearts of millions with their comedic and affable personalities as they played themselves in the popular series. During an exclusive interview with PopCulture.com, Mowry-Hardrict recalled her most favorite moment during those years, and she didn't fall short of recognizing the role her sister played in that.
TV & VIDEOS・4 DAYS AGO
Amomama

Tia Mowry once got emotional after her DNA test results revealed her ancestry back in 2020. She and her siblings grew up in an interracial household with a Bahamian mom and a European father. Tia and Tamera Mowry grew up in front of the camera, having been child stars at...
CELEBRITIES・7 DAYS AGO
Amomama

American actress Tia Mowry's ten-year-old son Cree Hardrict is sporting a new look for school, and feeling excited about it despite her initial fears. Tia Mowry came into the limelight when she starred alongside her twin sister Tamera Mowry in the sitcom "Sister, Sister," which ran from 1994 to 1995. Since then, she has come a long way in her career and appeared in multiple movies and TV series.
CELEBRITIES・6 DAYS AGO
Amomama

Tia Mowry experienced several changes following the birth of her children, and judging by a recent social media share, the actress loves every moment of motherhood. American actress Tia Mowry gained recognition when she appeared alongside her twin sister, Tamera Mowry, on the classic show "Sister, Sister." The series saw the twins act themselves on the big screen.
CELEBRITIES・4 DAYS AGO

Rob Dyrdek is showing some love to his dad Gene. The 47-year-old reality TV personality and former pro skateboarder took to Instagam to post a photo and video of him golfing with his father. In the caption, Dyrdek talked about how his dad was able to beat him in the golf outing on the final hole.
CELEBRITIES・11 DAYS AGO
Amomama

RonReaco Lee AKA Tyreke from ‘Sister, Sister’ Is a Doting Dad to 2 Kids - Glimpse inside His Fatherhood

RonReaco Lee is a proud father of two amazing kids who make up his world. His approach to fatherhood is impressive, much like his prowess on the big screen. Actor RonReaco Lee has played a lover, a mechanic, a band director, a cunning sports manager, and a criminal on-screen, performing each so well that it is quite tasking to decipher his true personality.
FAMILY RELATIONSHIPS・13 DAYS AGO
Us Weekly

Mom’s little bookworms! Angelina Jolie shared new photos of her kids reading on Friday, September 3. “End of #summerreading,” the actress, 46, captioned an Instagram slideshow of Zahara, 16, reading Toni Morrison’s The Bluest Eye and Shiloh, 15, reading Akala’s The Dark Lady. “These are some of the favorites in our house. Would love to know yours.”
CELEBRITIES・14 DAYS AGO
Insider

Tamera Mowry-Housley wants more shows with Black casts and storylines rebooted. For "Sister, Sister," Mowry-Housley told Insider there's only one way her show would return. "My sister and I need to be involved creatively," she said, referencing her twin and costar, Tia Mowry-Hardrict. Fans are constantly begging Tamera Mowry-Housley for...
CELEBRITIES・1 DAY AGO