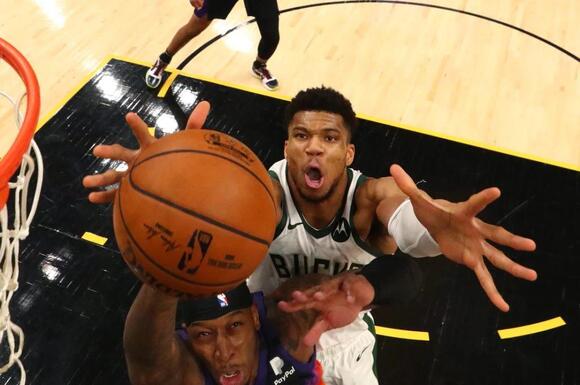 MILWAUKEE — The Bucks are favored to close out the NBA Finals at home on Tuesday night, but bettors expect the Phoenix Suns to send the series back to Arizona for a decisive Game 7.

However, the past two wins were in dramatic fashion, and Phoenix had the best regular-season road record in the NBA at 24-12.

The Suns are being backed by 62 percent of the spread-line bets and 61 percent of the money at DraftKings, with action even more one-sided at 60 percent and 76 percent, respectively, at PointsBet.

“You have to embrace it,” Suns forward Jae Crowder said Monday. “You have to embrace where you are in the series and from there you have to focus and channel your emotions and energy towards the next game, and that’s tomorrow night. We just know it’s going to be a dogfight. … It’s win or go home. The words speak for (themselves).”

The Suns are focused on patching up a defense that allowed a pair of 40-point games to Giannis Antetokounmpo, another to Khris Middleton and a memorable Game 5 effort from Jrue Holiday.

“Our guys have always wanted it, but I think when you’re in these moments like this, this is different,” Suns head coach Monty Williams said. “This is different than the first time against the Lakers, where it was just 2-1. This is it. I think we’re just going to see more, like we have throughout the playoffs.”

While the Bucks have shared the leading role to win three straight in the series, the Suns continue to lean heavily on Devin Booker. He has 82 of the team’s 222 points in the past two games — a pair of 40-point efforts, both in losses. Williams allowed that Booker wants to “win the moment” but the Suns need more of the team attack to dismantle Milwaukee’s defense.

The Bucks continued to dominate inside even without Antetokounmpo carrying the scoring load and ran out for 21 fast-break points in Game 5. Milwaukee head coach Mike Budenholzer credits the open-floor decision-making with unifying his group and promoting the level of unselfishness the Bucks have showcased the past two games.

Decisions are not coming as easily or naturally for Chris Paul, the Suns point guard who is averaging 3.6 turnovers per game in the series as the focus of the Bucks’ full-court pressure. The idea, Holiday said, is to make Paul work on every dribble and hope that pays off with missed shots or rushed decisions in the fourth quarter.

PointsBet reported the Suns at +165 is the book’s biggest liability ahead of Game 6. Milwaukee is now responsible for 58 percent of the series bets, opening at +145 to win the title and seeing those odds shorten to -425 with a 3-2 lead.

Phoenix Suns All-Star Devin Booker and his girlfriend Kendall Jenner were reportedly made witness to a road accident that proved to be fatal. According to Teresa Roca of The U.S. Sun, the Suns star was traveling with Jenner last week in Biloxi, Mississippi, when traffic reached a standstill. The couple exited the vehicle and caught a glimpse of a tragic accident that forced motorists to a screeching halt.
NBA・23 DAYS AGO
AllPacers

Many people believe that Vince Carter, Michael Jordan and Dominique Wilkins are probably three of the best dunkers to ever step foot in the NBA. However, one name that does not get brought up enough is Gerald Green. Green played 12 seasons in the NBA with the Boston Celtics, Miami...
NBA・15 DAYS AGO
AllPacers

Torrey Craig played for the Milwaukee Bucks and the Phoenix Suns last season. Lucky for him, they both teams made the NBA Finals. Although he was on the Suns in their NBA Finals loss to the Bucks, he will still get an NBA Championship ring (see Tweet below from StatMuse).
NBA・10 DAYS AGO
FanSided

Should the Phoenix Suns Consider Bringing Back Isaiah Thomas?

The Phoenix Suns want their dark days as a franchise butchered, buried, and essentially erased from existence as they begin to chase down their first ever NBA championship. With the team having fully closed off that less enjoyable chapter within its history books last year, nobody wants to revisit it while so many brighter days lie ahead.
NBA・4 DAYS AGO

The 2021-22 NBA season is set to tip off on Oct. 19 (ET). In preparation for the upcoming season, we're dedicating one day between now and the start of the season to each team in the league. Next up: the Milwaukee Bucks. 2020-21 season record. 46-26, 3rd in Eastern Conference.
NBA・4 DAYS AGO
ClutchPoints

Phoenix Suns star Devin Booker tested positive for COVID-19, which is the reason why he was put into the league’s health and safety protocol heading into training camp. The Suns announced on Sunday that Booker won’t be able to participate in Monday’s Media Day and at the start of training camp because of the protocol. Hours later during a Twitch stream, Booker himself confirmed that he’s positive of the dreaded virus, noting that he has been dealing with it for about a week now.
NBA・1 DAY AGO
FanSided

One of the cool things to see since the Milwaukee Bucks won the championship has been the string of podcast appearances that members of the team have been making. Mike Budenholzer was on ESPN’s Zach Lowe’s The Lowe Post, Brook Lopez joined his brother (and former Buck) Robin on J.J. Redick’s The Old Man and the Three, and Jrue Holiday made his second appearance on that same podcast, to name a few.
TENNIS・15 DAYS AGO
FanSided

Milwaukee Bucks: Grading every first round pick since 2014

The Giannis Antetokounmpo era has given the Milwaukee Bucks and their fans plenty to smile about over the past eight years. After all, Antetokounmpo’s rapid ascension to superstardom has helped the franchise return to relevancy after years of mediocrity. There was also some chatter that the Bucks could have been relocated to a different market right around the time that the organization selected him with the 15th pick in the 2013 NBA Draft, and he certainly helped keep them in Milwaukee. It goes without saying that Antetokounmpo was a slam dunk pick for the Bucks.
NBA・13 DAYS AGO

By this point, I’m sure most Milwaukee Bucks fans are tired of hearing about the Malcolm Brogdon trade. I’ll be honest, for a while, I was too! However, everyone who said the Bucks wouldn’t win a championship because they let Brogdon go has an egg on their face. It’s finally time we revisit this trade with open minds and open hearts because hey, the Bucks won a championship!
NBA・12 DAYS AGO
Yardbarker

While Stephenson has not been signed yet, its clear from all of these workouts that there is a desire for him to be back in the NBA. Stephenson has played for many teams over his nine year career, and just turned 31 years of age, but he is best known for his time on the Pacers.
NBA・11 DAYS AGO
FanSided

Milwaukee Bucks: Ranking the 5 best shot blockers on the 2021-22 roster

Since the arrival of head coach Mike Budenholzer, the Milwaukee Bucks have turned into a defensive juggernaut during the regular season. This defensive philosophy centers primarily around not allowing easy shots at the rim and contesting all shots around the basket. Even this past season, although Budenholzer became more willing to change defensive strategies throughout the regular season and in the playoffs, the Bucks’ primary identity always remained the same: not allow points at the basket.
NBA・10 DAYS AGO
chatsports.com

The point guard position has been somewhat of a revolving door for the Milwaukee Bucks over the last 10 seasons, stretching back to 2011-12. There have been a number of times that Bucks fans have tried to convince ourselves that we have our point guard of the future or long-term solution at the position during this stretch. As the Bucks got better and better over the last 10 seasons, going from rebuilding to playoff contender to championship contender to champions, it felt like point guard had always been the missing link.
NBA・9 DAYS AGO

Former Virginia Tech point guard Justin Robinson has agreed to a two-way contract with the defending NBA champion Milwaukee Bucks, The Athletic reported Sunday. A two-way contract means Milwaukee can shuffle Robinson back and forth between the Bucks and Milwaukee's NBA G League affiliate, the Wisconsin Herd, without losing him to another squad.
NBA・14 DAYS AGO
FanSided

Milwaukee Bucks: 3 X-factors to repeating as champions in 2021-22

Although it seems like they won the title just yesterday, the Milwaukee Bucks are already gearing up for the new season. The shortened offseason certainly flew by as the Bucks are just a few short weeks away from the first preseason game of the 2021-22 season. Last season was undoubtedly an eventful ride from start to finish, and there are bound to be some fireworks as this team looks to defend their title as the reigning world champions. While many have already written them off due to the competition around the league, the Bucks have a chance to defend their title and go back-to-back next year. With that being said, here are three X-factors that will be crucial for the Bucks to repeat in 2022.
NBA・9 DAYS AGO
FanSided

Phoenix Suns: Where Ex-Suns Signed as Free Agents This Offseason

Even if you spend just a few games playing for the Phoenix Suns, their ferocious and passionate fanbase will never forget about you. The “once a (team name)…always a (team name)” cliche absolutely applies to them as a franchise, doing so all the way across their 53-year history. But more...
NBA・14 DAYS AGO
chatsports.com

Giannis Antetokounmpo helped the Milwaukee Bucks become a championship team. Mandatory Credit: Benny Sieu-USA TODAY Sports. Orlando Magic general manager John Hammond probably has some odd feelings when it comes to the Milwaukee Bucks and the title they just won. In many respects, he was the architect of that title...
NBA・11 DAYS AGO

MILWAUKEE, WISCONSIN - MARCH 22 (Photo by Dylan Buell/Getty Images) The Milwaukee Bucks could not have predicted just how important Bobby Portis would become for the team when they signed him last offseason. While Portis was somewhat of a household name, he had bounced around the league in previous seasons...
NBA・11 DAYS AGO
chatsports.com

Milwaukee Bucks: Poised for another strong year defensively in 2021-22

Los Angeles Lakers: 3 advantages LA has over the Milwaukee Bucks

The Los Angeles Lakers were unable to repeat as NBA Champions as the Milwaukee Bucks won the 2021 NBA Championship less than 10 months after the Lakers fought through the Orlando Bubble to become the 2020 NBA Champions. The Lakers fell short in the first round of the NBA Playoffs...
NBA・13 DAYS AGO
FanSided

It goes without saying that Jrue Holiday’s first season with the Milwaukee Bucks in 2020-21 was a massive success. After having traded a significant haul for the guard during the 2020 offseason, the Bucks made it crystal clear that they believed Holiday would be the missing piece to their title aspirations after years of coming up short. Ultimately, that came to fruition as Holiday’s efforts helped the Bucks plow through the postseason and hoist the Larry O’Brien Trophy for the first time in 50 seasons. Before he took the court in Milwaukee, we assessed Holiday these three goals, and it is time to see if he hit the mark during the 2020-21 season.
NBA・10 DAYS AGO