San José Spotlight is the city's first nonprofit news organization dedicated to independent political and business reporting. Our mission is to change the face of local journalism by building a community-supported newsroom that ignites civic engagement, educates citizens and strengthens our democracy. 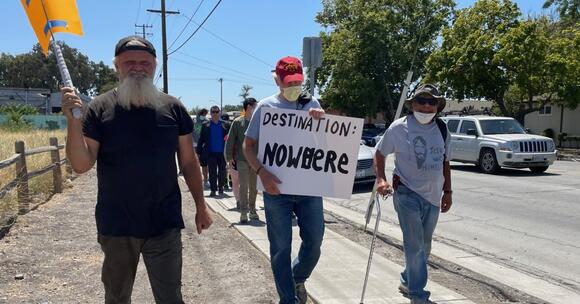 Federal officials are demanding a 40-acre homeless encampment outside San Jose’s airport be dismantled. Protesters fought back at a rally Tuesday, urging the city to keep the encampment open.

But the Mineta San Jose International Airport could stand to lose tens of millions of dollars if it doesn’t clear the homeless camp.

Residents are pleading with city and airport officials to meet with the homeless residents to ensure none of them get displaced. Many of the residents fear the city will eventually sweep the encampment to comply with demands from the Federal Aviation Administration to clear it. The site is home to approximately 200 homeless individuals—though informal estimates place the resident count at more than 400—and has become the largest encampment in Silicon Valley after The Jungle was cleared years ago.

“I’ve met some of the most generous, loyal people who I consider friends here,” Kelly Goodman, a resident of the encampment and former nurse, told San José Spotlight. “This is a community… Let us police ourselves.”

If the city sweeps the encampment, residents are asking for help to find permanent housing instead of being swept to another encampment.

Protesters started their march at Spring and Asbury streets at the heart of the encampment, and made their way down busy Coleman Avenue before rallying back at the encampment, located in Columbus Park. The encampment is less than three miles away from the airport. Planes headed to the airport fly over the location daily.

“It’s important that we put pressure on the San Jose City Council to negotiate with the FAA to allow the homeless to remain here and to have organized encampments where people can be helped more efficiently,” homeless activist Richard Scott told San José Spotlight. “This area really is not near any residences. The folks who have businesses near here have had some problems. But I think if you organized the area, they’d have (fewer) problems.”

According to one of the letters, the airport told the FAA it plans to clear everyone out by April 2022 and build a fence around the site to stop new people from moving in. The city would leave the gate open for existing homeless residents, but close it once they relocate to “prevent future encroachment.” FAA officials worry this will allow more homeless people to move in.

“The airport continues to coordinate the fence line with its stakeholders along with the city’s timeline which will be provided in the city’s response to the FAA by July 31,” airport spokesperson Keonnis Taylor told San José Spotlight.

At the end of the rally on Tuesday, homeless activist Shaunn Cartwright called on attendees to put pressure on the city to host a community meeting. The rally drew about 30 people.

“When you sit there and say, ‘Hell no, I won’t go until I have this tiny home, this shelter home, until I have another place to go, until I have safe parking for my RV’—whatever it is—nothing’s going to change,” she said.

If the city doesn’t comply with the FAA’s demands, Taylor said, the agency could withhold money from passenger facility charges, which goes to airport upkeep, as well as Airport Improvement Program grant funding which pays for safety improvements.

The annual passenger facility charges depend on the volume of passengers, but pre-pandemic estimates place annual fees at approximately $30 million. The improvement program funding averages $10 milllion to $15 million annually, according to Daniel Lazo, spokesperson for the city’s Parks, Recreation and Neighborhood Services Department.

The city backed off on its plan to evict residents from Columbus Park last month after it posted notices at the encampment threatening arrests if anyone interfered with cleanup efforts. The city maintains the notices were just to inform residents of the encampment they were cleaning the area—not evicting residents.

“Unhoused residents of this encampment are not being evicted at this time. The process of clearing this area will take months of planning, preparation and execution by the city of San Jose,” Lazo said. “City staff are currently assessing the needs, preferences and eligibility of encampment residents for housing, shelter and supportive services.”

The encampment’s population ballooned during the COVID-19 pandemic, with some informal estimates placing its size to over 400 residents. People who live in the camp say there are too many people living there to evict with few solutions.

“There has to be a give and take. It can’t be that the city says this and the FAA says this. I understand that we need that money in the city. But we’re part of the city too,” Goodman said. “The city is taking and we’re losing everything.”

I see no sympathy for these homeless people. For years, they caused tons of trashes every where. It's time for them to live responsible lives like the rest of us.

what do they mean there are no residents....I'm a resident across the street from this trash.....those homeless are ripping us off of our belongings breaking into our cars and homes and at night there are always gun shots also me and our neighbors have caught them in our backyards and trying to open our doors to our homes....they are drug addicts and mentally ill...we don't feel safe in our homes....why don't those protesters take them home with them and see how they act...sorry but they need to get them out of here so we can feel safe again!!!!

Staedler: Stormwater permits will require hundreds of millions of dollars to comply

A Santa Clara County deputy district attorney who was reinstated after being fired is now suing his boss and the county, claiming District Attorney Jeff Rosen is preventing him from coming back to work. The lawsuit represents the latest salvo in a yearslong dispute that started in early 2021 when Daniel Chung criticized criminal justice... The post Santa Clara County attorney is suing the DA — again appeared first on San José Spotlight.
SANTA CLARA COUNTY, CA・6 HOURS AGO
San José Spotlight

Maritza Maldonado was raised in East San Jose by parents who immigrated from Mexico. They worked in the fields before her father found employment as a custodian and her mother as a cannery worker. She grew up with parents who wanted a better life for their daughter and she didn’t let them down.
SAN JOSE, CA・2 HOURS AGO
San José Spotlight

15 of the most influential Black leaders in Silicon Valley

Black residents make up about 3% of Santa Clara County’s population, but the impact of Black leaders on the region is undeniable — even while facing adversity. The Black community in Silicon Valley and across the nation face systemic disparities: The population is overrepresented among the homeless and historical housing segregation has resulted in lower... The post 15 of the most influential Black leaders in Silicon Valley appeared first on San José Spotlight.
SANTA CLARA COUNTY, CA・1 DAY AGO
San José Spotlight

How San Jose mayor will tackle trash, homelessness and crime

Santa Clara County will close its mass COVID-19 vaccination and testing sites by the end of February, but the pandemic is far from over for those with compromised health conditions. County health officials gathered Wednesday to discuss the closures, which are set to happen by Feb. 28. But the pandemic’s long-term impacts on vulnerable populations cannot... The post Santa Clara County closing mass COVID vaccine and testing sites appeared first on San José Spotlight.
SANTA CLARA COUNTY, CA・4 DAYS AGO
San José Spotlight

A newly-appointed San Jose councilmember faced allegations of cheating, but the city failed to investigate those claims. Three people claim Domingo Candelas, who was appointed to the District 8 San Jose City Council seat last week, cheated during the interview process by having access to questions ahead of time. The allegations stem from Candelas’ use of a tablet and phone before and during questioning.
SAN JOSE, CA・6 DAYS AGO
San José Spotlight

Editor’s Note: This is a transcript of Santa Clara County Supervisor Susan Ellenberg’s full 2023 State of the County address. Thank you. Thank you to everyone here tonight, filling the chambers, the breezeway outside and even the adjacent auditorium. I’m feeling the love! Thank you to everyone watching remotely. Thank you to all the elected... The post Full transcript: Santa Clara County Supervisor Susan Ellenberg’s 2023 State of the County appeared first on San José Spotlight.
SANTA CLARA COUNTY, CA・5 DAYS AGO
San José Spotlight

A China-based real estate firm whose co-founder was recently arrested in connection with a bribery scheme is selling off a premier residential development site in San Jose, while the fate of two others is still unclear. The former Greyhound bus station site at 70 S. Almaden Ave. in downtown San...
SAN JOSE, CA・5 DAYS AGO
San José Spotlight

Santa Clara County is dealing with unaffordable housing, inaccessible child care, homelessness and a mental health crisis. One leader wants to build coalitions to solve the region’s most pressing problems. Supervisor Susan Ellenberg touted her agenda of “building together” on Tuesday in her first State of the County address as president of the Board of... The post UPDATE: Santa Clara County leader prioritizes addressing mental illness, child care appeared first on San José Spotlight.
SANTA CLARA COUNTY, CA・5 DAYS AGO
San José Spotlight

Recently, the San Jose Rules Committee, composed of four councilmembers, unanimously passed a motion intending to make Public Records Act (PRA) requests more restrictive and therefore likely to be unsuccessful. While we doubt any local jurisdiction is legally able to change the state’s PRA regulations, and the committee’s proclamation is consequently only a performative gesture, such shenanigans are... The post Op-ed: Public Records Act enforcement needed more than ever appeared first on San José Spotlight.
SAN JOSE, CA・6 DAYS AGO

San José Spotlight is the city's first nonprofit news organization dedicated to independent political and business reporting. Our mission is to change the face of local journalism by building a community-supported newsroom that ignites civic engagement, educates citizens and strengthens our democracy.