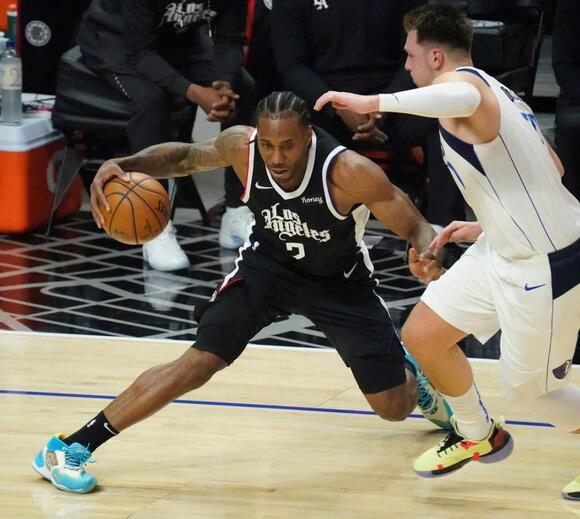 The New York Knicks plan to be active during NBA free agency. Meanwhile, Kawhi Leonard will opt out of his contract and hit the open market despite suffering a partially torn ACL during the NBA Playoffs.

While there’s a good chance Leonard opts to re-sign with the Los Angeles Clippers on the open market, it has not stopped rumors from persisting about potential landing spots should he leave Southern California.

If that were to happen, Odds Shark has the Knicks as the favorites to land the two-time NBA Finals MVP. They are joined by other top-end contenders and teams looking to make a splash heading into free agency.

It shouldn’t come as too much of a surprise that the Clippers are betting favorites to retain Leonard. This has been the case over the past several months.

With that said, there’s a scenario in play here which includes Leonard departing Southern California after just two seasons. While Los Angeles made its deepest run into the playoffs in franchise history this past season, it still didn’t earn a trip to the NBA Finals. There’s now an open question whether the duo of Leonard and Paul George can lead this organization to the title. 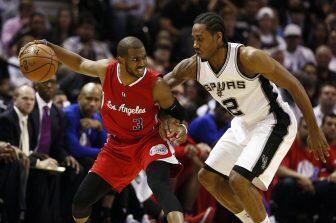 Among the others listed, we’ve already heard rumors that the Miami Heat and Dallas Mavericks are interested in acquiring Leonard. Both could be seen as top-end title contenders with him in the mix and could be in the cap situation to add him this summer.

As much as it isn’t a surprise the Clippers are favored to retain Leonard, we’re not taking aback by New York’s inclusion here. Fresh off a shocking trip to the NBA Playoffs, the Knicks are seen as a prime landing spot for big-name players — both in free agency and on the trade market.

Just recently, they have been anointed favorites to land future Hall of Fame point guard Damian Lillard should he request a trade from the Portland Trail Blazers. New York has also been linked to big-name free agents such as Chris Paul and Kyle Lowry. 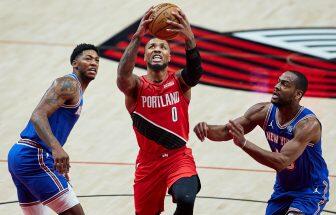 Whether they even have a chance to land Leonard will depend heavily on other offseason plans for front office head Leon Rose and Co. Simply put, the star forward is not going to join the Knicks without another top-end player teaming up with him. It’s similar to when both Leonard and George headed to Los Angeles ahead of the 2019-20 season.

The good news for Knicks fans? This team will have north of $55 million to spend in free agency. They can conceivably sign Leonard outright while potentially pulling off a blockbuster trade for someone like the aforementioned Lillard.

Frank Ntilikina came into the NBA out of France as 19 year old in the 2017 draft. The New York Knicks selected him with the eighth overall pick. Yet, after just four seasons on the Knicks he does not appear to be in their plans any longer and is now a free-agent (see Tweets below from Marc Berman of the New York Post on August 1 and Keith Smith of Spotrac on August 11).
NBA・10 DAYS AGO
chatsports.com

NEW ORLEANS, LOUISIANA - FEBRUARY 17: Damian Lillard #0 of the Portland Trail Blazers stands on the court during the fourth quarter of an NBA game against the New Orleans Pelicans at Smoothie King Center on February 17, 2021 in New Orleans, Louisiana. NOTE TO USER: User expressly acknowledges and agrees that, by downloading and or using this photograph, User is consenting to the terms and conditions of the Getty Images License Agreement. (Photo by Sean Gardner/Getty Images)
NBA・22 DAYS AGO
ClutchPoints

After dropping Certified Lover Boy late on Thursday night, Drake surprised the world by having Kawhi Leonard make an appearance in the music video for “Way 2 Sexy.” The video itself is a hilarious mashup of movie references. However, Twitter has been roasting Kawhi Leonard’s hair instead. Kevin Durant seems...
NBA・14 DAYS AGO
ClutchPoints

The Portland Trail Blazers are adding some depth behind Damian Lillard by signing former lottery pick Dennis Smith Jr. to a training camp deal, according to ESPN’s Adrian Wojnarowski. Smith is no guarantee to make the final roster, but the Blazers have two open roster spots remaining with 13 players...
NBA・15 DAYS AGO

After Lillard and the Blazers were eliminated by an undermanned Denver Nuggets squad without Jamaal Murray, the media and fans started linking him as a third star to join the Lakers. Even though this was years ago, the internet never forgets, and tweets like this just add fuel to the...
NBA・18 DAYS AGO
NBA Analysis Network

The New York Knicks didn’t have widespread changes to their roster this season as many had predicted. Armed with the most cap space in the NBA and multiple first-round draft picks, many expected New York to make a splash. The old Knicks would have made that splash. Even if the...
NBA・3 DAYS AGO
chatsports.com

NEW YORK, NY - MARCH 20: Jeremy Lin #17 of the New York Knicks steals the ball in the second half against Andrea Bargnani #7 of the Toronto Raptors (Photo by Chris Chambers/Getty Images) The Toronto Raptors didn’t have a ton of postseason success in the pre-Masai Ujiri era, and...
NBA・4 DAYS AGO
NBA Analysis Network

The Portland Trail Blazers wasted no time making changes once their offseason began following a first-round elimination in the NBA playoffs at the hands of the Denver Nuggets. Hours after the defeat, Terry Stotts and the organization parted ways. Chauncey Billups was hired as his replacement and will be tasked...
NBA・17 HOURS AGO

Most of the offseason is over with just a few minor trades and free-agent acquisitions taking place around the NBA. That means it's time to look forward to the 2021-22 season and take a look at how some of those moves this summer could work out for teams when the games begin. More specifically, examine which players could have standout seasons after joining a new club.
NBA・8 DAYS AGO
ClutchPoints

The Dallas Mavericks are in the market for some backcourt support behind Luka Doncic – and looks like they’ve zoned in on their target. The Mavs have been linked to former New York Knicks lottery pick Frank Ntilikina, as reported by NBA insider Marc Stein. Frankie Smokes seems like a...
NBA・2 DAYS AGO
NBC Sports

Lou Williams says Kawhi Leonard works at his own speed

Lou Williams has had some legendary teammates during his 16-year career. He was drafted onto the Allen Iverson 76ers, then played briefly on Kobe Bryant’s Lakers and James Harden‘s Rockets. Then there was the Kawhi Leonard Clippers. Williams, who will suit up for the Hawks next season, was on The...
NBA・12 DAYS AGO
chatsports.com

Julius Randle, RJ Barrett, New York Knicks. (Photo by Tom Pennington/Getty Images) The New York Knicks are ready to bring their revamped roster into the 2021-22 NBA season and build off of their success from last year. Two weeks ago, the NBA announced every team’s schedule for next season. We’ve...
NBA・13 DAYS AGO

Kawhi Leonard Revealed How Competitive Kobe Bryant Was With Him: “I Shot It 47 Times”

For many of the superstars in the NBA today, Kobe Bryant was a huge inspiration. Most of the players in the NBA grew up watching Kobe Bryant dominate the game with the Los Angeles Lakers. And for many players, he was their favorite player growing up. In the post-Michael Jordan...
NBA・1 DAY AGO
Bleacher Report

The Dallas Mavericks are the "likely next destination" for free-agent guard Frank Ntilikina, per league sources to NBA reporter Marc Stein. The New York Knicks selected Ntilikina with the No. 9 overall selection in the 2017 NBA draft. He played four seasons in New York, averaging 5.5 points on 36.6 percent shooting and 2.7 assists in 19.5 minutes per game.
NBA・2 DAYS AGO
Yardbarker

Do the New York Knicks already have their long-term solution at point guard on the roster?

The New York Knicks have set themselves up perfectly for the future, whereas over the past few seasons, they’ve made malicious moves that have disrupted chemistry and convinced star players to take their talents elsewhere. It was only one year ago that fans believed the Knicks might trade Julius Randle...
NBA・13 DAYS AGO
Yardbarker

When considering the New York Knicks’ most underrated player, most may point to third-year shooting guard RJ Barrett. Barrett established himself as one of the best players on the team last season, averaging 17.6 points, 3.0 assists, 5.8 rebounds, and shooting 44% from the field. However, I would argue that Barrett is rated properly and took a significant step forward in his development at 20 years old.
NBA・12 DAYS AGO

Kawhi Leonard appears to be catching the OVO fever. The Los Angeles Clippers star makes an appearance in Drake’s latest music video. The video is for the song “Way 2 Sexy,” and it was released on Friday. During his appearance, Leonard is seen standing on white sand and dancing as...
MUSIC・13 DAYS AGO
dailyknicks.com

New York Knicks: 3 Players who will benefit the most from Kemba Walker

The New York Knicks’ addition of Kemba Walker has the city amped up for next season. With the Knicks bringing back largely the same roster as last season and signing Evan Fournier and Kemba Walker, there is already a strong expectation that this team can build off of their success from last season.
NBA・12 DAYS AGO
FanSided

New York Knicks: Why Kemba Walker should be a 3-point shooter

There is an expectation that guard, Kemba Walker, will be the secondary ball-handler/ playmaker for the New York Knicks during the 2021-22 season. Dan Favale of Bleacher Report stated on August 4th that Walker’s ability to create a shot from scratch makes him the clubhouse leader to be the secondary ball-handler/ playmaker on the team.
NBA・13 DAYS AGO
AllClippers

On a recent episode of CJ McCollum's "Pull Up" podcast, Toronto Raptors legend Kyle Lowry joined the show and shared some exclusive insight about Kawhi Leonard. Along with stories about the way Kawhi operates and what makes him so great, Lowry also shared ways in which trading for Kawhi drastically changed his role.
NBA・14 DAYS AGO