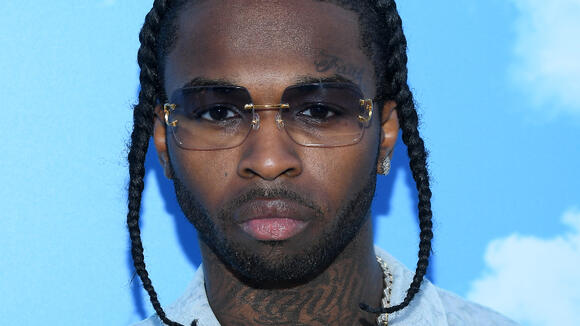 The next posthumous album from late rapper Pop Smoke, Faith, is out now.

We’ll start out by saying Pop Smoke’s posthumous debut, Shoot for the Stars, Aim for the Moon, may be impossible to duplicate. The award-winning, double-platinum album boasted executive producers 50 Cent & Jamie Foxx - it was destined for greatness.

While Faith, varies in circumstances, it does have its highlights.

Dua Lipa adds a plummy verse to the sleazy disco pop of “Demeanor.” “What’s Crackin’,” with Takeoff, suggests that a Pop Smoke and Migos tape could be a classic superstar team up that never was. Then there’s “Spoiled,” where Pop floats over Pharrell Williams’ inimitable keyboard melodies; it’s a nice moment, even if the lyrics calling women “spoiled” sound a bit mean-spirited. On “Tell the Vision,” Pusha T rhymes, “Tyler got the album of the year … for now/But Pop about to drop, I see the platinum in the clouds.”

Despite those shining moments, it also has its critics.

The 15-track record is oversaturated with unnecessary features, hindering the raw talent still left in these small leftover snippets from the Carnarsie star. One of the most highly-anticipated songs on ‘Faith’, ‘Demeanour’, featuring the UK pop phenomenon Dua Lipa, is underdeveloped and slight, the singer’s delivery disjointed; with a few more tweaks, it might have been worth releasing.

Lil Nas X has announced the release date for his new album Montero with a pregnancy photo shoot, calling it his “baby”.The 22-year-old rapper, who released the song “Montero (Call Me By Your Name)” in March, told People that he’s releasing his new project on 17 September. In the photoshoot, Nas X is seen dressed in a white satin robe with a flower crown and a baby bump. “SURPRISE!” he captioned the image. “I can’t believe I’m finally announcing this. My little bundle of joy Montero is due 17 September 2021.” The “Industry Baby” singer revealed that he came...
MUSIC・16 DAYS AGO
Billboard

DaBaby jokingly calls himself a "canceled ass" following his controversial Rolling Loud set in a new freestyle over BIA's "Whole Lotta Money" on Tuesday (Aug. 24). In an accompanying video, DaBaby whips out the tissues and seems to wipe away tears while rapping, "Yeah, whole lotta n---as with Glocks and pistols/ Whole lotta hunnids in knots, they Crip blue/ N---as think I'm somewhere cryin' with tissues/ Certified, internet or not, I'll get with you."
MUSIC・25 DAYS AGO
Radar Online.com

Kim Kardashian and Kanye West were in a great place just a few weeks ago with the music mogul telling friends that he was getting back with Kim. However, after his disappointing album release and Kanye unfollowing Kim on social media, insiders tell Radar that the pair are in a bad place again.
CELEBRITIES・4 DAYS AGO
Middletown Press

Kanye West Has Year's Top Album Debut, With Halsey Entering Strong at No. 2

It would’ve been Halsey’s week to finally land a No. 1 album, but Kanye West had other plans, and his surprise drop of “Donda” on a Sunday morning thwarted her once again. Both artists had a lot to celebrate, though, with infrequently seen six-figure album-equivalent debuts, and, in West’s case, bragging rights to the biggest album premiere of 2021 so far.
CELEBRITIES・11 DAYS AGO

Kanye West's new long-awaited album, "Donda," debuted at No. 1 on the Billboard 200 with 309,000 equivalent album units. The new project dethroned Olivia Rodrigo’s Sour, which moved 295,000 units in June, as the most successful debut of the year. West has now become one of just seven artists to...
CELEBRITIES・13 DAYS AGO
eaglenationonline.com

Review: Kanye West’s new album ‘Donda’ is worth one listen, but not another

Releasing his 10th studio album, Kanye West tributes his mother Donda West, who passed away on Nov. 10, 2007. “Donda,” the official album title, came available for digital streaming Saturday, Aug. 29. Featuring 27 tracks, and despite being delayed for a month, fans alike pushed the album to No. 1...
MUSIC・10 DAYS AGO
hypebeast.com

It’s finally here. Kanye West’s tenth studio album, Donda, has been released. After it was announced back in May of 2020, it seemed to vanish into purgatory. But this isn’t the first time West has done this. Back in 2016, West dropped The Life of Pablo, his seventh studio album,...
CELEBRITIES・11 DAYS AGO

Expectedly, Kanye West and Drake's album numbers were going to be compared, especially since the efforts arrived within a week of each other. However, a new report claims that Drizzy's Certified Lover Boy LP has out-streamed ’Ye's Donda in just a few days. According to a report in Rolling Stone...
MUSIC・10 DAYS AGO
hypebeast.com

Kanye West is back on top of the Billboard 200 as DONDA opens this week at No. 1. According to Billboard, the 27-track project earned a total of 309,000 equivalent album units — just below its initial 350,000 units forecast — with 272,000 streaming equivalent units, 37,000 in album sales and under 1,000 in track equivalent album units. DONDA garnered 357.39 million on-demand streams in its first week, surpassing the previous record set by J. Cole‘s The Off-Season as 2021’s largest streaming week for an album.
CELEBRITIES・13 DAYS AGO
hillsdalecollegian.com

After two years of waiting, fans across the world were greeted on the morning of Aug. 29 with Kanye West’s latest album: “Donda.”. Named after his late mother, this one-hour and 48 minute long album has tracks whose themes cover Kanye’s marital problems, his political endeavours, and even samples from Donda West herself.
MUSIC・9 DAYS AGO
Daily Tar Heel

Kanye West is notorious in the musical sphere as a critically acclaimed American producer and rapper. With the release of his 10th studio album, “Donda,” members of The Daily Tar Heel’s editorial staff ranked which of Kanye’s solo albums are contenders for his best work — and which ones fall short.
CELEBRITIES・11 DAYS AGO

Is Kanye West's 'Donda' the Longest No. 1 Album of the 21st Century?

Kanye West scores his 10th No. 1 on the Billboard 200 albums chart this week with Donda, and easily the longest of his 10. Spanning 27 tracks and nearly 109 minutes, Donda is indeed the longest album to top the chart this decade, calling back to hip-hop double LPs of the late '90s -- like in 1997, when epic two-discers from The Notorious B.I.G. (Life After Death), Wu-Tang Clan (Wu-Tang Forever) and Bone Thugs-N-Harmony (The Art of War) all bested the Billboard 200.
CELEBRITIES・11 DAYS AGO
power106.com

Even without his debut album solidified and released Fivio Foreign is making major noise with his recent Kanye West co-sign and “Off The Grid” feature. Pulling up to the Power 106 studios to tap in with the L.A. Leakers #LIFTOFF show, Fivio spoke with Justin Credible and B-Nyce on his ‘Donda’ experience, drops some details about his forthcoming debut album ‘Bible,’ and his journey in the game so far.
MUSIC・8 DAYS AGO
HipHopDX.com

The Bahamas – Riding high off their Verzuz victory, Jadakiss and The LOX headed to Donda headquarters stationed at Mercedes Benz Stadium in Atlanta to help Kanye West execute his 10th studio album. HipHopDX caught up with the Yonkers legends at Ice Cube’s Big 3 league championship on Sunday (September 5) in The Bahamas.
MUSIC・12 DAYS AGO
hotnewhiphop.com

There should be no limitation to what any artist -- or person, for that matter -- does creatively, but the question is: should there be constraints when one’s entire identity is the subject of endurance art? Publicly crucified for the VMA incident and resurrected with My Beautiful Dark Twisted Fantasy,Kanye West came back stronger (no pun intended) with the already-existent chip on his shoulder growing exponentially in the process. What became of Kanye West’s Yeezus era that followed was his commitment as a provocateur. The left-field, electronically-induced production on songs that bore titles like “New Slaves” and “Black Skinhead;” declaring himself a God; and the failed attempt to appropriate the Confederate flag for the sake of a poor political statement within high fashion. The past few years have largely been summed up by his alignment with Donald Trump, religious views, and failed presidential candidacy, rather than his musical output (outside of Sunday Service, of course).
CELEBRITIES・12 DAYS AGO
eaglenationonline.com

Over the past week, two of the arguably most anticipated albums in the rap music industry have dropped. Kanye West’s “Donda” and Drake’s “Certified Lover Boy” are both topping Apple Music’s Top Songs charts and are No. 1 and No. 2 on the Top Albums charts. “Certified Lover Boy” dropped just five days after “Donda,” which added to the existing drama between the rappers. Fans online have been debating which album is better but also judging the character of each artist.
MUSIC・10 DAYS AGO
Complex

Pusha-T is still praying for Drizzy’s downfall. The Daytona rapper took to Twitter yesterday to like a tweet that noted Drake’s dwindling second-day streaming numbers for his new album Certified Lover Boy, which saw a notable decrease after an initial first-day rush shattered streaming records across the board. According to...
CELEBRITIES・12 DAYS AGO
Middletown Press

Drake Crushes Kanye West for 2021's Biggest Album Debut, and He Owns the Top 10 Songs, Too

In the end, the battle for supremacy between 2021’s long-awaited superstar hip-hop premieres wasn’t even that close a contest. Drake’s “Certified Lover Boy” is the top-debuting album of the year so far, bowing with 595,300 album-equivalent units. That figure handily beats the 313,000 album units Kanye West’s “Donda” claimed when it premiered on the chart last week and at the time set its own record for the year to date, shortly to be toppled.
CELEBRITIES・5 DAYS AGO