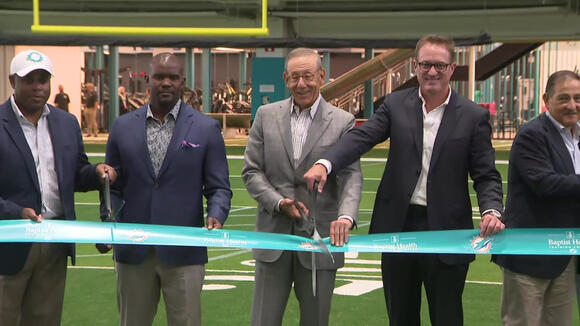 MIAMI GARDENS (CBSMiami) – Miami Dolphins training camp is just around the corner but this year, it’ll look and feel a lot different for both the players and the fans who come out to support the team.

That’s because the Dolphins are training in a brand new, state-of-the-art training facility built right next to Hard Rock Stadium in Miami Gardens, instead of their old facility at Nova Southeastern University in Davie, their home for nearly the last three decades.

All of the top brass from the Dolphins organization was on hand Tuesday for the official ribbon cutting, including owner Steve Ross and head coach Brian Flores.

“It’s like a dream come true for me,” said Ross. “We traveled the country, saw the best of all the teams and put it together. Hopefully, the players will be inspired to win.”.

It would be hard not to be inspired. The complex includes two outdoor practice fields — one grass and the other an artificial surface — and one indoor field. Covered seating will hold up to 2,200 fans during training camp. Inside there are lounge areas and 209 televisions.

There are two auditoriums and a dining room with a capacity of 158. The indoor training area includes four pools.

Coach Brian Flores said his players are excited about their new digs, and he credited Ross and team president Tom Garfinkel.

“They had a vision,” Flores said. “Today is the realization of that vision.”

Former legendary quarterback Dan Marino, who still works with the team as a Special Advisor, said the team’s training facility has come a long way over the years.

“It was amazing. I mean think about the size of the weight room. You go back to St. Thomas, we used to have chicken wire with two by fours and little nails to hang our clothes on and it’s a lot different now. This is the way, you know, the way the world is, the way the league is and it’s awesome,” said Marino to CBS4’s Jim Berry.

So what would legendary football coach and Pro Football Hall of Famer Don Shula think about the new facility?

“He would go crazy. He would love it,” said Marino. “But the fact that at St. Thomas, we had none of this, I mean, it was not even close, right. And we were able to do some good things there. So he would adapt and adjust and make sure that we were a good thing.”

Marino said it’s important to have the best facilities in order to attract the best players.

“There’s no doubt, if you have the best facilities, you know, players are going to want to want to be at the best place they can possibly, to take care of the body and win games and all that. so it’ll make a difference.”

So what’s going to attract them?

How about a “sauna, steam room, lap pool, cryotherapy, all that stuff,” said Marino. “I gotta use it all.”

WATCH: CBS4’s Jim Berry checks out the giant slide and gets a little stuck.

Even though Jim Berry got stuck on the slide, Steve Ross hopes the Dolphins, get unstuck and break through to that championship level and soon.

“If you can’t win with a facility like this, you’re never going to win,” he said.

Former wide receiver O.J. McDuffie believes it’s a winning facility. It’s so nice, he joked, he would would take the field again for at least one play, in order to work out there.

The Dolphins will host 14 training camp practices that are open to the public.

The first is Saturday, July 31. Attendance is free but you must reserve tickets by clicking here. 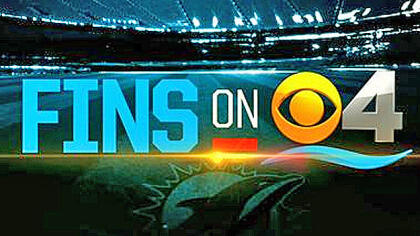 Be sure to join us for Camp Dolphins. Our daily Camp reports kickoff Wednesday July 28, following the late news every week night, leading up to the first preseason game which will also air on CBS4 with the rest of the preseason action.

Cincinnati Bengals QB Joe Burrow will make his 2021 debut Sunday vs. the Miami Dolphins, who won’t be playing fellow 2020 draftee Tua Tagovailoa. The No. 5 overall pick in last year’s NFL Draft, Tagovailoa was once viewed as the favorite to go No. 1 that year, an honor that ultimately was earned by Burrow. Tagovailoa had a rocky rookie season that saw him get benched in favor of Ryan Fitzpatrick at one point.
NFL・20 DAYS AGO
Sports Illustrated

Check out odds, plays and more for the Buffalo Bills vs. Miami Dolphins NFL Week 2 matchup on September 19, 2021.
NFL・4 DAYS AGO
chatsports.com

Have Dolphins done enough to compete with Bills in AFC East? Rebuilt Patriots could also make things difficult for Miami

The good news for the Miami Dolphins in the AFC East is that the New England Patriots’ two-decade stretch of dominating the division has concluded. The Dolphins’ chances in the AFC East, which they haven’t won since 2008, will largely come down to how they can compete with Buffalo in the coming years. The Bills have their franchise quarterback in Josh Allen, newly signed to a six-year, $258 million contract, and a stifling defense.
NFL・15 DAYS AGO
chatsports.com

NFL football returns tonight but not for the Miami Dolphins

LONDON, ENGLAND - OCTOBER 28: A detailed view of the pitch after the NFL International Series game between Philadelphia Eagles and Jacksonville Jaguars at Wembley Stadium on October 28, 2018 in London, England. (Photo by Jordan Mansfield/Getty Images) The Miami Dolphins and their fans have to wait a few more...
NFL・8 DAYS AGO

The Miami Dolphins had a resurgence last season, finishing just outside of the playoffs. However, in a survey conducted by Mike Sando of The Athletic, NFL executives ranked the Dolphins 11th in the AFC for this season. Of course, such a placement in the standings would once again leave Miami...
NFL・14 DAYS AGO
dolphinstalk.com

Louis Ragone joins Michael Fink to preview this coming Sunday’s big game. We tell you what we expect to see on both sides of the ball. We give you our score predictions to close the show.
NFL・9 DAYS AGO
chatsports.com

The Miami Dolphins could have 5 games against rookie QBs

The sky’s the limit for the 2021 Miami Dolphins

For 30 years, I’ve been a diehard fan of the Miami Dolphins. I watched from afar as we transitioned from the greatest of all time to a bunch of mediocre nobodies. Sure, there was a Jay Fiedler and Chad Pennington sprinkled in (Fitzpatrick would come later)—but for the most part, there hasn’t been a whole lot to get excited about.
NFL・10 DAYS AGO

The Curious Case of the Miami Dolphins 2021 captains

The Miami Dolphins announced their 2021 captains on Wednesday. These team selected players will be the leaders of the team and were recognized for their work ethic, their ability to coach and mentor, and the respect they have gained in the locker room. Players like starting quarterback Tua Tagovailoa, All-Pro cornerback Xavien Howard, All-Pro kicker Jason Sanders, and All-Pro kick returner Jakeem Grant all make sense as potential captains for the team. Starting inside linebacker Jerome Baker is clearly a leader on the defense and should be considered for a captain’s role as well.
NFL・9 DAYS AGO
FanSided

What will the strengths be for the Miami Dolphins?

Trying to forecast what will be happening with the Miami Dolphins has become more of a task, and that is a good thing. This group of Brian Flores and Chris Grier has everyone guessing, as they both continue to think outside of the box. There are trends most of the...
NFL・10 DAYS AGO
FanSided

Miami Dolphins: 3 New England players that need to be accounted for

The Miami Dolphins will begin their quest to return to postseason glory this coming Sunday. Their 2021 season kicks off in the exact same way that they kicked off the 2020 campaign; with an away matchup against the New England Patriots. Any Dolphin fan over the last twenty years recognizes...
NFL・8 DAYS AGO
Click10.com

16 of the Miami Dolphins’ most famous fans

As the NFL season gets underway, we thought we’d take a look at some of the more well-known Miami Dolphins fans who have made their allegiances known. Some of these are a bit more obvious, but perhaps we'll surprise you with one or two of these celebs on our list. And you can take solace in the fact that next time you're cursing at your TV, angry about the latest holding penalty, maybe Fergie is right there with you -- in spirit, at least.
NFL・7 DAYS AGO

Patriots lose by 1 to Miami Dolphins in season opener

FOXBOROUGH, Mass. (WWLP) — The Patriots opened their 2021 season with a week 1 loss, the Miami Dolphins winning 17-16. This was the first game fans were allowed to be at since the 2019 season, and they took full advantage of the return to normal at Gillette stadium. Parking lots were filled with tailgating fans excited to be back in Foxborough.
NFL・5 DAYS AGO
FanSided

Miami Dolphins activate Austin Jackson but is that a good thing?

The Miami Dolphins got some good news on Saturday as offensive tackle Austin Jackson has been cleared to return after a week on the COVID IR list. The lineman will be able to play on Sunday. Jackson has not had a good offseason and his play in the exhibition season...
NFL・6 DAYS AGO
FanSided

Well the Miami Dolphins walked out of New England with a week one victory. Was it a pretty win? Absolutely not, but these divisional games on the road seldom are. Like the rest of the team, the offensive line didn’t win any style points this past weekend. There were moments when pass protection broke down or defenders were unblocked on running plays, but all in all this unit held together against a difficult week one opponent.
NFL・2 DAYS AGO
Pats Pulpit

Week 1 is in the books, and the New England Patriots are 0-1. Starting the season with a loss isn’t all that new to the Patriots, but obviously it’s always better when you open the year with a W. However, if you aren’t happy and optimistic based on what we...
NFL・3 DAYS AGO
CBS Miami

MIAMI (CBSMiami) — It has been a while. The last time the Dolphins beat the Buffalo Bills In South Florida was 2018. There are 3 starters left from that Miami team, Xavian Howard, Devante Parker and Jesse Davis. And the last time these 2 teams played, Buffalo scored 56 points and won by 30. That was last season, when the Bills dominated both games, but this Dolphins team looks to reverse that trend and has a legitimate chance to do so. After a solid road performance in New England, in which the Dolphins won the turnover battle, the red zone battle and committed...
NFL・20 HOURS AGO
Sportsnaut

This is why teams are not interested in Cam Newton

Much has been made of Cam Newton’s release by the New England Patriots, and the lack of interest from other teams in light of that. In reality, it sounds like the biggest factor is simply that Newton isn’t the player he once was in the eyes of NFL teams. According...
NFL・12 DAYS AGO