By John Kruzel
Posted by
The Hill
13 days ago 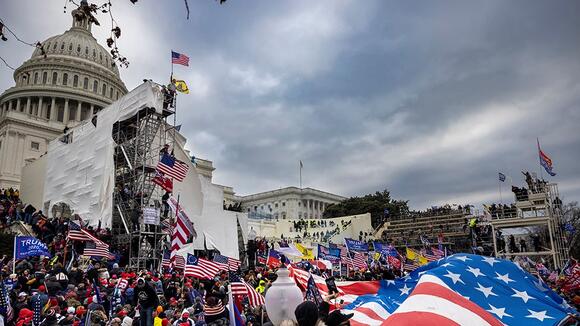 A special agent with the Drug Enforcement Administration (DEA) was arrested Tuesday on felony charges related to his alleged participation in the Jan. 6 riot at the Capitol.

Mark Ibrahim of Orange County, Calif., is accused of entering restricted grounds around the Capitol, possessing a firearm while there and lying to investigators, in what are believed to be the first charges filed against a federal law enforcement official involved in the pro-Trump attack.

Court records unsealed Tuesday contain photographs in which Ibrahim can be seen displaying his DEA badge and government-issued firearm, posing on a statue and walking along restricted grounds shortly after the barricades were breached. He has not been accused of entering the Capitol.

Ibrahim is alleged to have sent photographs and videos of himself on the Capitol grounds to a WhatsApp group chat with at least five other law enforcement officers, according to court records.

A Justice Department official said in a court filing that Ibrahim crafted a phony narrative in which he falsely claimed that his participation in the Jan. 6 event was part of an effort to assist the FBI. A friend who accompanied Ibrahim that day told the official that Ibrahim concocted the story to “cover his ass.”

Darren Richie, an attorney for Ibrahim, said his client “at all times remained peaceful and docile” and “played no role in any riot.”

“He never committed any violence, attempted to enter any buildings nor induced or promoted others to do so,” Richie said in a statement to The Hill.

News of Ibrahim’s alleged role in the Jan. 6 insurrection first came to light in March when the DEA placed him on leave.

Prosecutors have charged more than 500 people in connection to the pro-Trump attack, which temporarily delayed Congress's certification of President Biden ’s electoral win.

Judge erupts at Jan. 6 defendant who refused mask: 'You don't make the rules'

A federal judge on Friday told off a Capitol riot defendant who refused to wear a mask during his hearing, telling the defendant “You don’t make the rules.”. The confrontation took place during a hearing for defendant Daniel Goodwyn, according The Washington Post. He pleaded not guilty in April to five charges in connection with the Jan. 6 riot.

Glenn Allen Brooks texted selfies of himself inside the Capitol to a church prayer chat group, a DOJ criminal complaint said.

Daniel Goodwyn was charged with federal crimes in connection with the violent insurrection at the US Capitol on Jan. 6.

WORTHINGTON — A Minneapolis man has been charged with drug crimes relating to a Nobles County arrest that look place in May. Omar Arias-Arana, 30, of St. Paul was arrested following a traffic stop near Rushmore. During the stop, Arias-Arana had reportedly been talking on the phone with someone who appeared to be telling him what to tell the police.

The National Police Association on Wednesday slammed Congress’ investigation of the Jan. 6 Capitol riot as a politically motivated "dog and pony show" that has no intention of uncovering the truth of what really happened that day. In an interview with Fox News on Wednesday, association spokeswoman Betsy Brantner Smith,...

The Department of Justice (DOJ) on Tuesday announced another arrest stemming from the Jan. 6 insurrection amid the first day of the Capitol riot hearing. The DOJ in its statement on Tuesday said that federal authorities arrested Samuel Lazar of Ephrata, Pa., on Monday on federal charges including spraying Capitol police offers with a chemical irritant.

Off-Duty DEA Agent Who Had Government-Issued Gun at Capitol Assault Is Charged: Authorities

An off-duty special agent for the Drug Enforcement Agency (DEA) was armed with his DEA-issued gun when he attended the riot on the U.S. Capitol on January 6, according to court documents unsealed Tuesday. Mark Ibrahim of Orange County, California, who authorities say joined the pro-Trump riot, was arrested on...

Mark Ibrahim posed for multiple photographs outside the Capitol on Jan. 6, with his DEA badge and gun displayed, but told DOJ agents they were "never exposed."

A Mississippi man was arrested Tuesday for crimes related to the breach of the U.S. Capitol on Jan. 6, which disrupted a joint session of the U.S. Congress that was in the process of ascertaining and counting the electoral votes related to the presidential election. Michael Leon Brock, 54, of...

A former Drug Enforcement Administration special agent was arrested Tuesday for allegedly trespassing on Capitol grounds with a gun during the Jan. 6 riot — and later lying to the feds about why he was there. Mark Sami Ibrahim, of Orange County, Calif., is said to have joined the mob...

DEA agent trespassed at Capitol on Jan. 6 and lied about it, prosecutors say

A Drug Enforcement Administration special agent trespassed with his government-issued firearm on the Capitol grounds Jan. 6 and then lied about his actions, according to federal prosecutors. Mark Ibrahim, who was arrested Tuesday, is not accused of entering the Capitol building. Prosecutors say he entered the restricted grounds around the...

A special agent with the Drug Enforcement Administration brought his service weapon and badge to the Jan. 6 Capitol siege, defiantly displaying them for multiple photos taken in restricted areas on the Capitol grounds after police barricades were overrun, a newly-unsealed court filing reveals. Mark Sami Ibrahim, who worked out...

Mark Ibrahim also is accused of falsely denying that he displayed DEA badge and gun while outside Capitol on Jan. 6

NORFOLK, Va. – On Friday, a federal jury convicted a Kennewick, Washington man on charges of conspiracy to distribute and possession with intent to distribute cocaine, and distribution of cocaine. According to court records and evidence presented at trial, Juan Gabriel Rodriguez-Preciado, 43, facilitated the trafficking of kilogram quantities of...

A man arrested on Tuesday for his participation in the January 6 Capitol riots was an off-duty Drug Enforcement Administration (DEA) agent. According to a court filing, the man, Mark Sami Ibrahim, 32, allegedly posed for photographs at the Capitol with his DEA-issued badge and handgun. Ibrahim was a probationary...

An DEA agent from Orange County participated in the Jan. 6 Capitol riot, flashing his badge and gun while off-duty, federal prosecutors allege.

A Drug Enforcement Agency agent was arrested Tuesday after allegedly filming himself holding his firearm and waving a flag reading 'Liberty or Death' as he stormed the Capitol on January 6. Mark Sami Ibrahim was reportedly on leave from his job at the agency, and was not acting in his...

Federal officials based in Indianapolis on Thursday announced 17 arrests and 19 indictments in what they say is the takedown of a drug-trafficking group thought to be linked to homicides in Indianapolis. The announcement came a day after a series of raids in which FBI agents and police seized 35...

WASHINGTON (FOX 5 DC) - A Special Agent with the Drug Enforcement Administration (DEA) faces multiple charges, including making a false statement and entering a restricted area with a firearm, in connection with the Capitol Riots that took place on Jan. 6. According to charging documents, Mark Sami Ibrahim of...