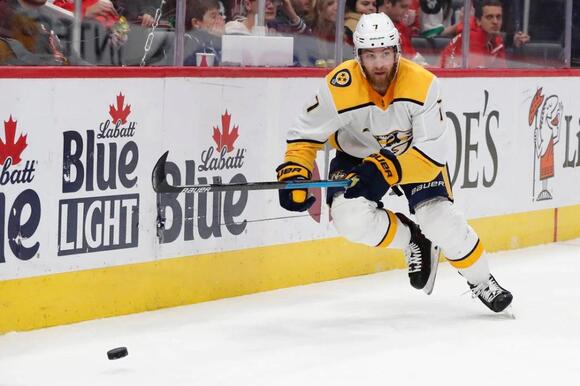 Defenseman Yannick Weber announced his retirement Tuesday from the NHL after 13 seasons.

The 32-year-old will continue playing in his native Switzerland, where he signed a three-year contract with ZSC Lions of the National League on June 8.

Weber, who reached the 2017 Stanley Cup Final with the Nashville Predators, made his announcement in a letter to the Stanley Cup posted on Instagram.

“Dear Lord Stanley Cup,” he wrote. “Fifteen years ago, I left Switzerland with a dream: to be drafted by an NHL team. With only a handful of Swiss players ever playing in the best league in the world, for me it seemed more of a hope than a possibility to be next in line.”

The Predators lost the championship series to the Pittsburgh Penguins in six games.

“2017, I was two wins away from meeting and hoisting you, but Sidney Crosby decided to keep you for another year and I was left heartbroken and devastated.” Weber wrote. “You made me understand why it’s the hardest trophy to win and how fortunate you have to be to have your name engraved.

“Even though I can’t call myself a champion, you left me with a lifetime of memories and great friendships. Now it’s time to head back home and enjoy time with my family.”

Since the opening night of the 2022-23 NHL season, Bo Horvat, the captain of the Vancouver Canucks, has seen his
COLORADO STATE・6 HOURS AGO
Sportsnaut

The NHL All-Star Game is taking place on Feb. 4, 2023, at FLA Live Arena, in Sunrise, Florida, with the
SUNRISE, FL・2 DAYS AGO
Sportsnaut

Toronto Maple Leafs goaltender Matt Murray will be sidelined through the NHL All-Star break with an ankle injury, coach Sheldon
1 DAY AGO
Sportsnaut

Jets surge past Blues with 4 goals in third period

Josh Morrissey and Mark Scheifele each scored twice as the Winnipeg Jets rallied for a 4-2 victory over the visiting
SAINT LOUIS, MO・5 HOURS AGO
Sportsnaut

The Dallas Mavericks find themselves at a crossroads leading up to the Feb. 9 NBA trade deadline. Dallas heads into
DALLAS, TX・8 HOURS AGO
Sportsnaut

World Series odds 2023: Who will win the World Series? Every team’s future odds

The 2023 MLB season is just around the corner and that means there are World Series odds to evaluate. A
2 DAYS AGO
Sportsnaut

The Ottawa Senators have another opportunity to continue their recent success in advance of the All-Star break, while adding to
12 HOURS AGO
Sportsnaut

Eleven years after being let go by the Philadelphia Eagles, coach Andy Reid has his sights set on revenge, with
KANSAS CITY, MO・1 DAY AGO
Sportsnaut

The Carolina Hurricanes have drawn from various sources on their latest winning streak, with nothing more impressive than Sebastian Aho’s
LOS ANGELES, CA・13 HOURS AGO
Sportsnaut

The Indiana Pacers are quickly approaching the NBA’s trade deadline. And decision time has arrived on their direction for the
INDIANAPOLIS, IN・14 HOURS AGO
Sportsnaut

The Seattle Kraken will not be represented at NHL All-Star Weekend this Saturday after star rookie Matty Beniers was ruled
SEATTLE, WA・9 HOURS AGO
Sportsnaut

Two teams in need of some down time will meet Tuesday night when the Washington Capitals visit the Columbus Blue
COLUMBUS, OH・10 HOURS AGO
Sportsnaut

Two-time Gold Glove catcher Roberto Perez agreed to a deal with the San Francisco Giants, according to reports on Sunday.
SAN FRANCISCO, CA・1 DAY AGO
Sportsnaut

Jazz Chisholm Jr. of the Miami Marlins will appear on the cover of MLB The Show 23. Chisholm, 24, made
MIAMI, FL・11 HOURS AGO
Sportsnaut

As the up-and-down nature of their season continues, the Chicago Bulls at least have felt good about relying on the
CHICAGO, IL・12 HOURS AGO
Sportsnaut

The Milwaukee Bucks put their four-game winning streak on the line Tuesday when they play host to the Charlotte Hornets.
MILWAUKEE, WI・11 HOURS AGO
Sportsnaut

We all knew this day would come. We just didn’t know when. Bo Horvat’s time as the captain of the
COLORADO STATE・10 HOURS AGO
Sportsnaut

Donovan Mitchell, Cavs look to get back on track vs. Heat

Despite being without Donovan Mitchell for the better half of the last two weeks, the Cleveland Cavaliers have managed to
CLEVELAND, OH・6 HOURS AGO