Anthony Joshua vs Oleksandr Usyk: When is the fight, UK start time and TV channel information

By Jack Rathborn
The Independent
24 days ago 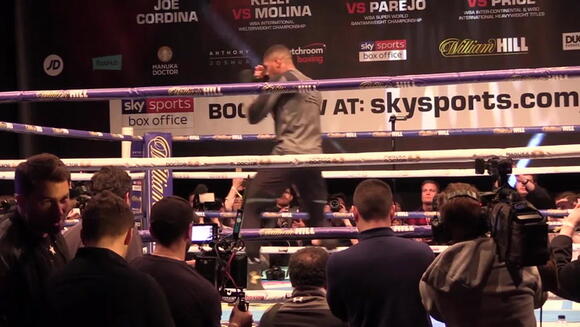 Anthony Joshua is back and will fight Oleksandr Usyk at Tottenham Hotspur Stadium.

The Briton will put his three world heavyweight titles on the line against the unbeaten Ukrainian, looking to avoid an upset and remain on course for a shot at becoming the first undisputed heavyweight champion since Lennox Lewis.

Now 24-1, with 22 KOs, Joshua is in form after coming off a destructive stoppage over Kubrat Pulev , putting the Bulgarian away inside nine rounds at The SSE Arena in Wembley last December.

The 31-year-old’s bout with Usyk is a contingency plan after a fight with WBC world heavyweight champion Tyson Fury fell through, with Deontay Wilder activating his rematch clause and the Gypsy King since testing positive for Covid-19 .

Here is everything you need to know about the fight:

What time is the fight and when are the ring walks?

The fight will start around 10:30pm BST, though there is a chance that the results on the undercard could bring the start time up somewhat.

Expect the ring walks to come just after 10pm BST should there not be a series of early stoppages on the undercard.

What TV channel is Joshua vs Usyk on and is there a live stream?

Joshua is back on Sky Sports Box Office in the UK, though the pay-per-view price is yet to be revealed. That said, it is likely to be the same as last time: £24.95.

What are the fighters saying?

Joshua: “The date is set and we are fully locked in. September 25, Tottenham Hotspur Stadium, I put it all on the line again and it’s time to defend my crown. We are two Olympic Gold medallists who have fought our way to the top and never avoided challenges.

"The stadium is exceptional, the atmosphere will be electric, I’m honoured to be the first person to fight in such an awe inspiring venue. The stage is set and I am ready to handle business.”

Usyk: "The path will be mastered by the walking one."

Eddie Hearn: “Olympic Gold vs. Olympic Gold, Unified World Heavyweight Champion vs. Undisputed Cruiserweight World Champion this one has it all and I can’t wait to stage this huge event in front of over 60,000 at the stunning Tottenham Hotspur Stadium on September 25."

AJ is flying right now and while Usyk has the skills, it remains to be seen if he has the necessary size to mix it with the three best heavyweights in the world right now, who are giants compared to some of the champions in the past. We’ll lean towards Joshua inflicting a late stoppage to retain his belts.

Tyson Fury is someone to speak his mind honestly and lay out his opinions fearlessly. Fury again gave his take on the fight of Anthony Joshua versus Oleksandr Usyk, this time giving us a take on why exactly did Joshua lose. Joshua lost to Usyk via unanimous decision on Septmeber 25, 2021. The loss cost Joshua his WBA Super Heavy, WBF, IBO and IBF world titles.
PARADISE, NV・9 DAYS AGO
SkySports

Oleksandr Usyk is plotting a fight with Tyson Fury after facing Anthony Joshua again, his promoter has revealed. Fury's brilliant win over Deontay Wilder in their trilogy fight extended his WBC championship reign, a fortnight after Usyk won the IBF, WBA and WBO belts from Anthony Joshua. The new undisputed...
COMBAT SPORTS・5 DAYS AGO
SkySports

Anthony Joshua has triggered his clause for a rematch against Oleksandr Usyk, which will take place in the spring of 2022, says Eddie Hearn. British heavyweight Joshua lost his IBF, WBA and WBO belts to Usyk via unanimous decision at the Tottenham Hotspur Stadium last month. Usyk has already spoken...
COMBAT SPORTS・8 DAYS AGO
Bleacher Report

Heavyweight star Anthony Joshua has exercised his contractual rematch clause with Oleksandr Usyk for the unified heavyweight championship after losing to Usyk in September, per ESPN's Mike Coppinger. "Back in the game and looking for him to become a three-time world champion," Joshua's promoter Eddie Hearn said Saturday. The 34-year-old...
COMBAT SPORTS・8 DAYS AGO

Tyson Fury disappointed in Anthony Joshua loss, he was ‘probably looking at Oleksandr Usyk and thinking of Tyson Fury’

Before Tyson Fury signed a contract for his trilogy against Deontay Wilder, “The Gypsy King” was just days removed from promoting a planned showdown against Anthony Joshua. The British heavyweights have been on a collision course for several years but the fight had never been closer to reality only for...
COMBAT SPORTS・10 DAYS AGO
SkySports

Frazer Clarke firmly believes he can become a future world heavyweight champion, despite witnessing Oleksandr Usyk's "brilliance" against Anthony Joshua. Clarke is expected to announce the start of his professional career after claiming a super-heavyweight bronze medal at this summer's Tokyo Olympics. The 30-year-old has already studied two of the...
COMBAT SPORTS・12 DAYS AGO
chatsports.com

Tyson Fury against Anthony Joshua would still be a 'massive fight' despite AJ's shock defeat by Oleksandr Usyk... and Battle of Britain CAN happen if Gypsy King wins trilogy bout against Deontay Wilder, insists Frank Warren

Anthony Joshua could still fight Tyson Fury despite being dethroned as world heavyweight champion, according to Frank Warren. Joshua lost his WBA, IBF and WBO crowns at Tottenham Hotspur Stadium after being outclassed by Oleksandr Usyk, seemingly scuppering a domestic dust-up with WBC titlist Fury that would have had all four major belts on the line.
COMBAT SPORTS・13 DAYS AGO

Tyson Fury vs Deontay Wilder 3: When is the fight, how to watch on TV in the UK and our prediction

Deontay Wilder has vowed to produce "a devastating knockout" on Saturday night and regain his WBC title belt from Tyson Fury as the two towering heavyweights meet for a third time. The pair fought to a split draw in December 2018, with Fury usurping the title from Wilder here in...
COMBAT SPORTS・13 DAYS AGO
International Business Times

With most still high on the successful heavyweight title defense of Tyson Fury against Deontay Wilder over the weekend, the name of Anthony Joshua has cropped up anew. However, the 31-year-old needs to address his issues for now. He is coming off a loss to Oleksandr Usyk last September 25...
COMBAT SPORTS・6 DAYS AGO
firstsportz.com

LAS VEGAS, Nev. -- Talk about drama. The third fight between Tyson Fury and Deontay Wilder has tons of it with a fight three years in the making that was all but certain to happen until it wasn’t and then was on again. On Saturday, Oct. 9, Fury will defend...
LAS VEGAS, NV・8 DAYS AGO

Tyson Fury’s UK promoter Frank Warren tells Sky Sports that he doesn’t believe Anthony Joshua should’ve enacted his immediate rematch clause with Oleksandr Usyk, instead openly opining that Joshua should take a tune-up bout to get his confidence back which would allow for Tyson Fury to face Oleksandr Usyk for undisputed heavyweight champion status.
COMBAT SPORTS・3 DAYS AGO
Boxing Insider

Like many who were watching, Eddie Hearn was glued to his television set. This past weekend, both Tyson Fury and Deontay Wilder staged one of the most epic heavyweight battles in recent memory. The two clashed at the T-Mobile Arena in Las Vegas, Nevada, and were bombs away from the opening bell. With each man scoring numerous knockdowns, Hearn was on the edge of his seat.
LAS VEGAS, NV・4 DAYS AGO
chatsports.com

Eddie Hearn has overlooked Anthony Joshua's chances in his heavyweight rematch with Oleksandr Usyk, as the promoter accidentally let slip that he believes the Ukrainian will beat his star fighter next year. The British heavyweight activated his rematch clause over the weekend after losing his WBA, WBO, IBF and IBO...
COMBAT SPORTS・2 DAYS AGO
worldboxingnews.net

Deontay Wilder would have beaten Tyson Fury via knockout in the fourth round of their heavyweight title fight if he’d gone to a neutral corner. That’s the view of British media newspapers who are attributing referee Russell Mora’s ‘long count’ to the official following the rules to the letter. DEONTAY...
COMBAT SPORTS・1 DAY AGO
Insider

An unbeaten Cage Warriors champion failed to make weight, but UFC boss Dana White signed him anyway when he lit up Contender Series.
UFC・3 DAYS AGO
The Independent

MPs are to examine next week whether public money committed to considering a UK and Ireland bid to host the 2030 World Cup represents good value for the taxpayer. The cross-party Digital, Culture, Media and Sport (DCMS) committee will question funding body UK Sport on Tuesday about the £2.8million of Government money allocated to a feasibility study on whether to bid for the tournament.
UEFA・2 DAYS AGO
The Independent

Tottenham’s plans for Sunday’s Premier League trip to Newcastle have been plunged into chaos after two players tested positive for coronavirus. Both men, who trained with the group on Thursday, were shown to have contracted Covid-19 after tests in the last 24 hours. The two unnamed players must now isolate...
PREMIER LEAGUE・1 DAY AGO