"Three's Company" star John Ritter was just 54 years old when he died of an undiagnosed aortic dissection in 2003, on his daughter Stella's fifth birthday. In recent years, his daughter has been making moves to transition into a male.

A close friend of the Ritters reported that Stella is now transitioning from a female to a male. John's child has also been going on by his new name, Noah Lee Ritter.

Noah Lee Ritter was born on September 11, 1998, and is the only child of John Ritter and Amy Yasbeck. He has half-siblings from his dad's previous relationship.

Reportedly, Noah, now 22, has been living as Noah Lee Ritter 24/7 and even has facial hair due to the treatments that he's been receiving. According to reports, Noah's mom and half-brother were supportive of his big decision. Some sources claim that John would've been supportive of whatever his child wanted to do, too.

Noah was just 5 years old when John died in 2003. A source reportedly shared that John Ritter's death had been really hard on him at the time. Since then, Noah has been keeping a low profile on social media. In fact, even his Instagram account is set to private.

Though Noah has a Twitter account, the tweets are protected. When the news of Noah's transition broke out in the media in 2016, he changed his Facebook profile photo to a snap of a ferret licking its lips.

Under his birth name Stella, Noah Ritter has an IMDb page, which gives him the titles of composer and actor. According to the profile, Noah Lee is known for "The Namazu," "Behind Closed Doors," and "This Is My Friend."

Considering John Ritter's kids, it certainly seems that Noah is the most private of the group. However, there are just a few photos of Noah available online in recent years, which gives fans a glimpse of how he looks today. 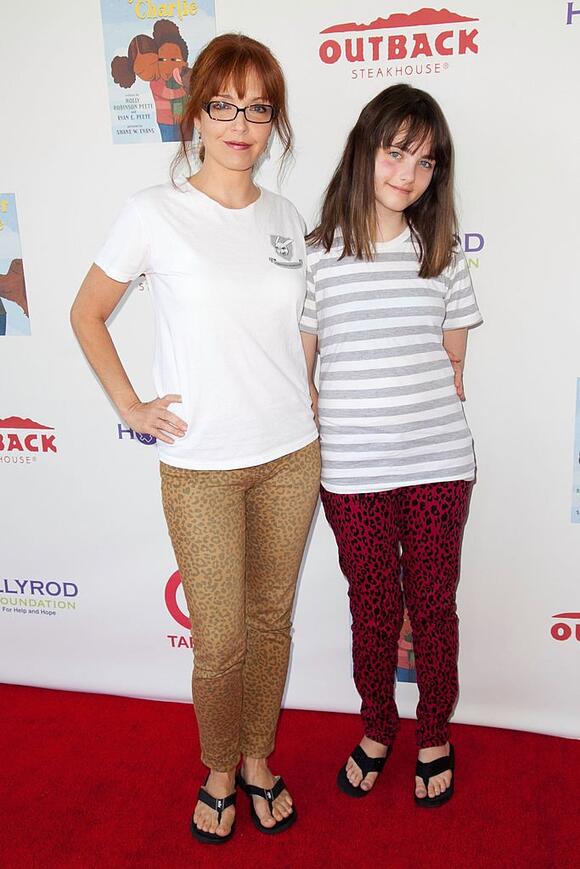 Long before John became an accomplished actor, his father Tex Ritter rose to fame as an acclaimed country music superstar. While it may seem John's kids weren't spoiled, as other celebrity kids seem to be, his daughter Carly Ritter grew up influenced by her parents' celebrity status.

Carly was affected by her early exposure to music and grew up immortalizing her passion for music. She was raised in Los Angeles and attended high school in Santa Monica. Later, she attended Vassar College in New York, and there, she discovered her love for Scottish folk music.

Eventually, Carly became passionate about exploring the roots of American folk and wanted to experiment with her tunes and lyrics.

When Tyler Ritter decided to walk in his dad's footsteps, he was curious to try acting. Reportedly, Tyler spent several years signing minor roles in movies that most people have never heard of. However, all that changed when he landed a minor part in an episode of "Modern Family."

Since then, Tyler has never looked back again. He's appeared in a long list of popular series, and his filmography includes shows like "The Good Doctor" and "Hot in Cleveland."

Most importantly, Tyler Ritter had a recurring role in the DC show "Arrow," and he eventually won a significant role in a short-lived series titled "The McCarthys."

Clearly, Jason Ritter is the most famous of John's children. Jason cemented his name in Hollywood as a talented actor, and a great star people love to work with.

He's been following in his dad's footsteps regarding his reputation in the business. Jason has also proven to be an accomplished TV actor with his roles in shows like "Parenthood" and "The Class."

The 41-year-old actor is also a mainstay of the big screen. Jason landed roles in notable films like "Raise Your Voice," "Frozen II," and "Freddy vs. Jason."

No matter how hard it would've been for John's fans to process the news that he is no longer with us, his four children would've been more devastated.

Of course, they have to lead a complete life after his passing, and this would have been something John would've wanted his kids to do.

I never knew that John Ritter's father was a country western singer named Tex. I remember that John used an alter ego named "Tex" in a couple episodes of Threes Company as a way to trick Mr Furley (Don Knotts). He was channeling his Dad.

Still pushing that agenda and how do they know John would be supportive knowing he had a son? It seems most of Hollyweird has a trans in their family like it’s part of their contract to continue to get paid. Unreal how many are switched up! Even babies as young as 3/4yrs old?? Sad really! Abuse to be exact. After 18 you really don’t have much say even if you disagree.

no matter what she/he or anybody else has done we are supposed to hate the sin but love the sinner. if you think what any other person is doing is a sin then you still love them right where they are at! you are supposed to live a life that shadows God (as much as possible) and pray for those that do wrong along with your own wrongdoings. stop judging everybody for everything! not one person on this earth is free from sin. so please clean up your own side of the street don't throw it someone else

Actors Lily Rabe and Hamish Linklater are about to add a third baby to their family of four. Notably, this would be Linklater’s fourth child in addition to his first from a previous relationship. Lily Rabe’s rep confirmed to People recently that she is pregnant with her third child with...
NEW YORK CITY, NY・3 HOURS AGO
Amomama

Dana Reeve is not only remembered for her intriguing talent, but also for the undying love she had for her husband, Christopher Reeve, until his death. Inside the lives of Christopher and Dana, before and after the former's paralysis. For years, Hollywood has seen different fascinating love stories and admirable...
THEATER & DANCE・16 HOURS AGO
Amomama

Everyone may know Goldie Hawn from her seemingly happily-ever-after partnership with Kurt Russell. What many do not realize, however, is that her first marriage crumbled due to her infidelity. Goldie Hawn, known for her roles in the NBC sketch comedy program Rowan & Martin's Laugh-In, has also made a name...
NEW YORK CITY, NY・2 HOURS AGO
Amomama

Ron Howard from ‘Happy Days’ Is a Proud Father of 4 Children, 2 of Whom Followed His Path

Ron Howard has many achievements under his belt, including the title of award-winning director. Yet, his most revered title is being a father to his four children. Ron Howard, 67, is known for his movies "The Da Vinci Code" and "Angels and Demons," in which he co-starred alongside his wife. He has also directed and won awards and nominations for several movies, including "A Beautiful Mind" and "Frost/Nixon."
FAMILY RELATIONSHIPS・1 DAY AGO

The death of Peter Palmer left the burden of the announcement on his son, Steven Palmer. In the social media post, Steven shared some information revealing Peter's death was anticipated. Only a select few people will be familiar with the actor, Peter Palmer. In 1956, he starred in the musical...
CELEBRITIES・6 HOURS AGO
Amomama

Jane Seymour welcomed her twin boys at the ripe age of 44 in addition to her two other kids. Her twins are all grown up now, and they look more like her than they do with each other — meet them. Jane Seymour nearly died while giving birth to her...
FAMILY RELATIONSHIPS・21 HOURS AGO
Amomama

N'bushe Wright stunned fans in "Dead Presidents," but after a couple of years, she disappeared from the entertainment industry. Here's everything you need to know about the star who looks nothing her age at 52. The first thing many notice when looking at N'bushe Wright is her gorgeous big eyes....
NEW YORK CITY, NY・19 HOURS AGO
Amomama

Former "Grey's Anatomy" star Katherine Heigl opened up about the harsh and tiring working conditions many film and movie cast and crew members have to deal with when filming in a lengthy Instagram post. Katherine Heigl, "Grey's Anatomy," alum, took to Instagram this week to share an insightful look into...
CELEBRITIES・4 HOURS AGO
Amomama

George Segal, the famous "Pops" from the hit television show "The Goldbergs," passed away earlier this year and his death came quite unexpectedly. Recently, Wendi McLendon-Covey, who plays the role of Beverly Goldberg and had the opportunity to work for a long time with the late star, opened up about his passing.
CELEBRITIES・6 HOURS AGO
Amomama

Actress and filmmaker Lena Dunham said ‘I do’ to her boyfriend Luis Felber this past weekend, but the newlyweds are yet to confirm their nuptials themselves. Sources confirmed to People recently that Lena Dunham and her beau Luis Felber, both 35 years of age, got married over the weekend. Felber...
NEW YORK CITY, NY・3 HOURS AGO
Amomama

A wealthy woman is outraged when a homeless man gives her shivering daughter his coat at an open-air flea market. But suddenly everything turned upside down and she learned her lesson. There was nothing that Sharon Bernson loved more than going antiquing in New York CIty's flea markets. Of course,...
NEW YORK CITY, NY・6 HOURS AGO

Several decades since "Cool Runnings" aired, the cast members have gone on to live different lives, and one of the stars, Leon Robinson, has a grown-up daughter who once came out. Meet her. Cool Runnings will be marking its 28th anniversary since it hit the screens in the '90s. The...
CELEBRITIES・1 DAY AGO
Amomama

Charles S. Dutton has been through a lot in his quest for greatness. He quickly moved from prison to Hollywood after spending almost eight years in jail, following a crime of manslaughter. Inside the inspiring life of the icon. Charles S. Dutton has impressed many supporters with his superb acting...
CELEBRITIES・13 HOURS AGO
Amomama

"Lean on Me" star Beverly Todd who acted as Mrs. Joan Levias, experienced a tragedy that she is yet to recover from. After entertaining the joys of motherhood, the actress lost her only child—insights into the heartbreaking story and her life. Beverly Todd is a woman of distinct character and...
CELEBRITIES・1 DAY AGO
Amomama

Were it not for "The Facts if Life" star Chip Fields, Steve Harvey might not have reached the heights he has attained in his successful career, and he remains ever grateful to the actress. Steve Harvey is one of America's most successful television personalities. He is a man of multiple...
CELEBRITIES・1 DAY AGO

Christina Applegate's strength amidst fighting multiple sclerosis hasn't gone unnoticed. The actress got praises from James Marsden for not giving up and being an "inspiration." Christina Applegate recently received praises from co-star James Marsden for her strength as she battles multiple sclerosis. The actor revealed he firmly believed in the...
CELEBRITIES・1 DAY AGO
Amomama

Nicolas Cage has found himself as the subject of yet another headline addressing his drunken ways. The actor was recently mistaken for a homeless man while he was out drinking in Las Vegas. It isn’t very often that Nicolas Cage is splashed all over the news unless he is promoting...
NEW YORK CITY, NY・4 HOURS AGO
Amomama

Black Mother Is Criticized for Adopting Two White Siblings: 'Did You Kidnap' Them?

A black woman from Connecticut has faced massive criticism from people for her decision to adopt two white siblings. Despite the negative comments, she continues to be a devoted mother to her two kids. Kimberly Holden is no ordinary black female. She always wanted to adopt kids ever since she...
SOCIETY・14 HOURS AGO