Reality star Erin Napier got candid about her relationship with her late beloved grandmother in an exclusive written piece this week on Southern Living.

“HGTV” star Erin Napier talked about the special bond with late grandma a year after her death. Erin keeps her grandparent’s memory alive by creating something to pass down.

In a written piece for Southern Living, the 35-year-old shared how her grandmother Ouida Walters Rasberry kept the dented aluminum biscuit bowl in one of her two tiny closet pantries. 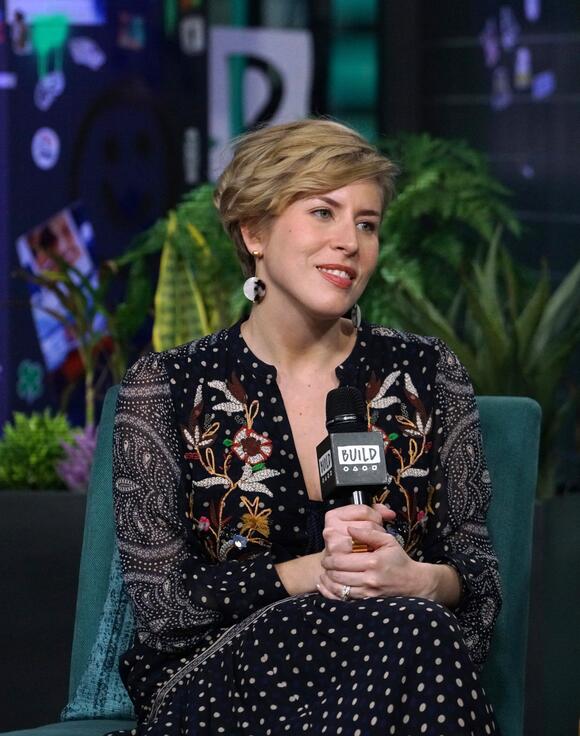 Napier said her grandma used to eat collards and eggs fried from a metal canister stamped with the word “grease” daily until she was 97.

When Erin was in high school, she asked grandma to teach her the secrets of biscuit making. She said her grandmother pulled out the dented aluminum bowl and poured a few cups of Martha White self-rising flour into it.

“Her instructions weren’t quantifiable: ‘Put in the buttermilk until it looks about like this,’” Erin wrote. From there on, she jotted down her estimates so she would have proof.

Napier's grandmother also taught her two of her most beloved dishes: spicy rice and tomato gravy. She always served the rice on Sunday.

“But in January 2008, she suffered a stroke that stole the words from her mouth and memories from her mind,” Erin shared. At the time, she was a recent Mississippi State University graduate and was engaged to be married.

“As I was about to become a wife, I realized how badly I wanted to know all of those untold recipes. I felt a new wave of grief in realizing that chance was gone, even if we still had her with us,” she said.

She then scanned the recipes one by one onto the computer and compiled them into a chapter book of her favorite dishes, “along with tips she had clipped from magazines.”

After the passing of her grandmother, she shared the news on social media and penned a heartfelt tribute to her on Instagram, and went on to write:

"My grandfather passed in 2001, and for 19 years, she lived without him. I’m so happy that he’s shouting, ‘here she comes!’ today, even if my heart is broken for us without her. My Mother Goose.”

She shared two vintage pictures of her grandparents along with the post but did not disclose any further details about her grandmother's passing.

Erin also posted a photo of herself wearing a family heirloom that belonged to the late family matriarch to her Instagram Story.

In June 2020, Erin broke down in tears after discovering that she had an unexpected personal connection to the historic apartment that she and her husband, Ben Napier, had begun renovating in downtown Laurel.

“I have never heard this in my life,” Erin said at the time, of the surprising connection. “I’ve had so much fun renovating this house, but I had no idea I had a personal connection to it,” she added.

Since then, Erin has decided to keep her grandmother's memory alive and created a cookbook filled with her old handwritten recipes.

She opened up about the special connection she built with her in the kitchen. “I took for granted that we would have time to cook like this again," she divulged.

Today, Erin is a mom to two kids whom she shares with her loving husband, Ben. The couple's first child is 3-year-old daughter Helen, whom they welcomed in January 2018, ten years after they walked down the aisle.

The pair recently became parents once again as they welcomed another daughter named Mae on May 28. Last month, Erin took to Instagram to praise Ben for the immense support in the near two weeks since giving birth to their new baby.

Six days after the lovebirds met, Ben told Erin that he loved her wanted to marry her. The duo met on December 27, 2004, at Ole Miss. Erin was in the art school at the time and had a crush on Ben – from afar.

So, when they eventually crossed paths, the mom of two was happy to hear Ben say to her, “I want to tell you something. I think I’ve fallen in love with you.”

The “Home Town” couple celebrated this year’s Valentine’s Day at home in the most romantic way. They had dinner prepared by a chef and were in pajamas. Erin described the evening as a “dream date for the introverted.”

True crime mysteries are something that tends to fascinate people in general. However, when a famous starlet is the subject of the true-crime story, it becomes ten times more fascinating, which is why Jean Spangler’s case was so widely spoken about. It has been many years since her disappearance, but...
CELEBRITIES・1 DAY AGO
Amomama

In his days, Tupac was easily the best rapper in the industry and was credited for changing the face of the music industry with his passion. However, beyond music, Tupac was a good lover. Here is a glimpse of his love life. Tupac Shakur remains a name that music lovers...
MUSIC・2 DAYS AGO
Amomama

Matthew Labyorteaux has enjoyed his career in the movie industry. While many celebrate his talent, they are unaware of the actor's struggles with health-related issues. Lovers of the TV series "Little House On The Prairie" would never forget Matthew Labyorteaux, who played the role of Albert. After his appearance on the series, Matthew landed other roles in "Deadly Friend" and "Max Payne."
CELEBRITIES・3 DAYS AGO
Amomama

A girl was stuck in the elevator and kept calling for help. Several apartment residents heard her, but no one offered help to the poor soul. “Hello, can anyone hear me? I’m stuck here,” little Evelyn cried. She was on her way back from the pharmacy after buying medicines for her mother when she got stuck in the elevator.
PUBLIC SAFETY・2 DAYS AGO

Erin Napier’s followers caught a rare glimpse into the Home Town star’s home life on September 6. Erin, who recently gave birth to her second daughter, Mae, shared an adorable photo of her newborn on Instagram. “Rainy days are my favorite at home,” Erin captioned a photo of Mae in...
CELEBRITIES・7 DAYS AGO
countryliving.com

Home Town star Erin Napier always keeps keeps things real when it comes to life as a mother. From struggling to find time to sleep, sharing her experience with breastfeeding after having her second daughter, Mae, and showing intimate glimpses into their house, fans always appreciate how relatable she is.
FAMILY RELATIONSHIPS・2 DAYS AGO
People

Erin Napier Has Written First Children's Book 'for Our Girls': See the Cover of The Lantern House

Erin Napier's first children's book tells the story of the most important place in her life: home. The star of HGTV's Home Town teamed up with her friend and frequent collaborator, artist Adam Trest, to write and illustrate The Lantern House, a heartwarming picture book from Little Brown due out in May 2022. And PEOPLE has a first look at the cover, below.
BOOKS & LITERATURE・7 DAYS AGO
Amomama

Home designer Erin Napier is now a children's book author after announcing her newest venture as of late while sharing her favorite books from her childhood. Erin Napier announced her new book release titled "The Lantern House" on Instagram Monday, September 13, in a lengthy post explaining the inspiration behind it.
ENTERTAINMENT・2 DAYS AGO

Duane “Dog The Bounty Hunter” Chapman has tied the knot with his fiancée, Francie Frane. This comes two years after they started their relationship and on the heels of an ongoing family feud. Reality TV mogul Duane “Dog” Chapman and his partner, Francie Frane, have officially become man and wife....
RELATIONSHIPS・13 DAYS AGO
Amomama

American entertainer, Nick Cannon's son Golden Cannon, looked like a mini version of his dad in a new picture his mom, Brittany Bell, shared on her Instagram. Nick Cannon is many things rolled into one. He is a rapper, singer, actor, and television presenter. He is also a father of seven children he shares with different women.
RELATIONSHIPS・20 DAYS AGO
talentrecap.com

Dancing With The Stars has been on air now for 30 seasons. This show is known for having just about anyone who is popular on the show. As time goes on, celebrities can unfortunately lose their spark and in result lose popularity. This show began before the internet was easily...
TV SHOWS・26 DAYS AGO
talentrecap.com

Dancing With The Stars has been around since 2005. The show has the ability to combine the older generation of Hollywood with the up and coming. We’re paying tribute to the celebrities who have passed away since their time on Dancing with The Stars. These four contestants are some pretty big names in both the DWTS world and Hollywood as a whole.
CELEBRITIES・9 DAYS AGO
centralrecorder.com

Having these two look out for each other after almost two decades of separation makes one wonder why they broke up in the first place. LaBelle never withheld that information from the general public. Armstead Edwards, famed for being the ex-husband of American singer Patti LaBelle, was married to her...
RELATIONSHIPS・2 DAYS AGO
Amomama

Diana Ross' family is full of incredible talents recognized by the world. However, tragedy struck this popular household and left members of the family in severe shock. Here are untold stories about Ross' loss. Diana Ross of Motown records was a megastar and powerhouse of the label. She was also...
CELEBRITIES・3 DAYS AGO
Distractify

As the star of HGTV's Flip or Flop and Christina on the Coast, Christina Haack has solidified herself as one of the most prominent stars in television's home-renovation space, and has become quite a well-known public figure. Whether it is for her remarkable work on television, raising three kids and two dogs, or the myriad of other titles she has taken on over the years, it's clear that Christina is a woman of many talents.
CELEBRITIES・19 DAYS AGO
Amomama

Last year was filled with tragic events for American singer Bobby Brown and his family. However, this year appears to be filled with happy moments, and the singer's wife, Alicia Etheredge, showed that in a recent Instagram post. Bobby Brown's music legacy goes way back to the '90s when he...
CELEBRITIES・24 DAYS AGO
survivornet.com

The Voice host Carson Daly paid tribute to his mother, Pattie Daly Caruso, on the fourth anniversary of her passing by sharing their last photo and text message exchange. Daly Caruso suddenly passed away at the age of 74 and was caring for her husband and Daly’s stepfather Richard Caruso at the time, who had just received an end-stage cancer diagnosis.
CELEBRITIES・1 DAY AGO
Us Weekly

Cheryl Burke Is ‘Nervous’ to Compete on ‘Dancing With the Stars’ Sober: ‘I am Feeling Insecure and I am Scared’

Pre-show jitters! Cheryl Burke revealed why competing on Dancing With the Stars sober is so nerve-wracking ahead of the season 30 premiere. “I’m Nervous for DWTS … Confession time — this may be my 24th time doing #dwts, and even though I’m SO excited, I also have major nerves,” the 37-year-old dancer captioned an Instagram video of herself driving to rehearsal on Monday, September 20. “Doing this show sober has really made me realize my every insecurity and the amount of pressure I put on myself, which is tough.”
TV SHOWS・1 DAY AGO
goodhousekeeping.com

At 39, LeAnn Rimes' Washboard Abs And Killer Legs Are The Showstoppers In New Performance Pics On Instagram

LeAnn Rimes, 39, and her super sculpted legs and abs shine onstage in brand new performance pictures. The country singer donned a white crop top and denim shorts for her latest concert in California. LeAnn works out wherever, whenever, and she loves a good bodyweight or weight training routine. LeAnn...
FITNESS・9 DAYS AGO