Former artistic gymnast Shawn Johnson surprised her Instagram followers with a video jumping with her husband even though she is about to give birth to her second baby.

While Shawn Johnson and her husband Andrew East constantly share hilarious videos and striking photos of themselves on social media, they are not your regular influencers.

For starters, she won three gold medals in the 2007 Artistic Gymnastics World Championship in Stuttgart and a gold medal in the 2008 Summer Olympic Games in Beijing, and he is a professional football player.

Coincidentally, the 2012 Summer Olympics in London were crucial for Johnson and East’s love story. While being in England as part of the USA Gymnastics team, Johnson attended her cyclist friend Taylor Phinney’s competition.

One of Phinney’s teammates was Guy, East’s older brother. Guy immediately thought that Johnson and his brother could get along well, so a few months after the Olympics were over, he put East on a plane to Los Angeles to meet her.

Things between the two started relatively slow. Still, six months after their first meeting, they went to the Indy 500. Then, in June 2013, she visited East in Nashville and spent their first official date watching a Vanderbilt baseball game.

After doing some other activities, Johnson fell in love with both East and the city, so she moved to Nashville four months later, and they’ve been together ever since.

On July 24, 2015, he proposed in a very romantic – and public – way. The USA Gymnastics team asked Johnson and fellow gymnast Alicia Sacramone to throw the first pitch at a Chicago Cubs game.

After doing so, East showed up on the field, and although he was in front of thousands of people, he got down on one knee and pulled out a small box with an engagement ring in it. She said yes, and everybody cheered them on. 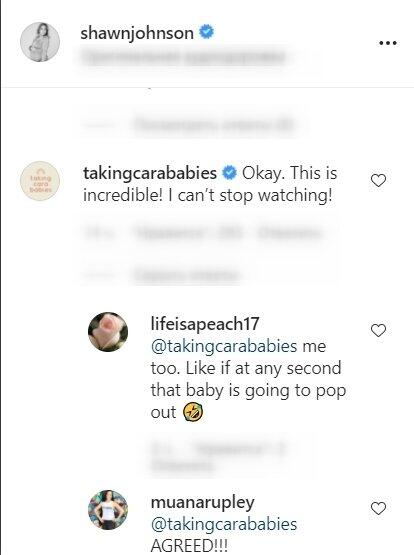 In April 2016, Johnson and East tied the knot at a property in Williamson County, Tennessee. On October 29, 2019, the couple’s first child, Drew, joined the family.

Her birth was notable for more than just one reason, including that she was born almost two years after Johnson suffered a miscarriage. Apart from that, things didn’t go as planned.

[A netizen] wondered how Johnson was not “peeing everywhere.”

Johnson explained she was so stubborn about giving birth naturally and without medications that she felt guilty when she got an epidural after 14 hours. After learning that she needed a c-section following 22 hours of labor, she felt like she failed. Johnson said:

“But after holding our sweet girl in my arms and being told everything went well, and she had made it to us safely, I could have cared less.”

In January 2021, East and Johnson announced that they were expecting their second kid. Only two months later, they revealed on YouTube that Drew would have a baby brother. 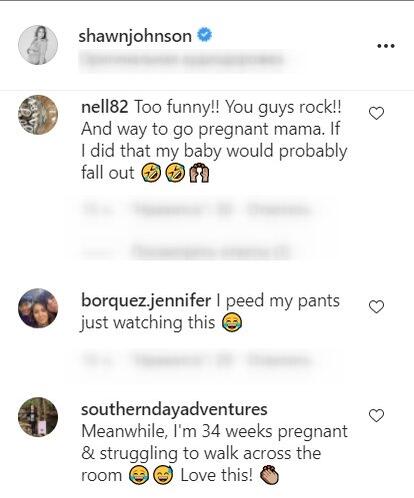 On July 13, 2021, Johnson surprised her over 3.1 million Instagram followers with a video showing herself wearing black leggings and a matching top jumping with her husband.

It is important to point out that she is expected to give birth pretty soon, so her followers took to the comment section to share their thoughts and praise her ability to move like that.

A netizen wrote that she was seriously impressed, adding that anyone who had been pregnant probably knew how hard jumping like that was. Another user wondered how Johnson was not “peeing everywhere.”

Johnson and East made headlines again in May 2021 when she showed her husband what it feels like to be pregnant. In the videos they uploaded on social media, East appeared doing different activities with a 14-pound ball wrapped to his stomach. They genuinely are a one-of-a-kind couple!

Can't the people who respect their own opinion just look in the mirror and work on their own defects.What difference could all of this really matter?

ANTHONY Johnson, best known for his roles in House Party and Friday, was pronounced dead on September 20, 2021. Johnson was rushed to a Los Angeles hospital earlier in the month after he was “found lifeless” in a store, TMZ reported. Who was Friday star Anthony Johnson and what was...
CELEBRITIES・7 DAYS AGO
Amomama

In 2018, Michael Jordan's daughter, Jasmine, was in the news after her engagement went public. The mom of one appears to have sparked an uproar as recent posts on her Instagram story left people talking. Basketball legend Michael Jordan's eldest and look-alike daughter, Jasmine Jordan, appears to have tied the...
BEAUTY & FASHION・14 DAYS AGO
Hello Magazine

Shania Twain looked more in love than ever when she attended the Zurich Film Festival on a rare outing with her husband, Frédéric Thiébaud. The couple enjoyed a date on Thursday evening at the premiere of foreign language film Und morgen seid ihr tot (And Tomorrow We'll Be Dead). Shania...
CELEBRITIES・3 DAYS AGO
Amomama

Luenell's only daughter Da'Nelle Campbell who once attacked her mother's personality seems to have changed her position, and the duo is in good spirits and appears to be bonding like BFFs. Meet the changed daughter. Luenell is a woman of incredible talent who seems to be aging gracefully and living...
CELEBRITIES・1 DAY AGO

David Cassidy was an actor best known for starring in "The Partridge Family." He wasn't the only heartthrob in their house, though, as his younger brother Shaun also stole the hearts of many. David Cassidy was born in New York City in 1950, rising to fame on the musical TV...
NEW YORK CITY, NY・4 DAYS AGO
Amomama

Ella Joyce became a household name in 1991 when she made an appearance on the sitcom "Roc." In addition to her acting career, the actress seems to have developed other skills professionally. Let's take a look at what Joyce has been up to. American actress Ella Joyce struck a chord...
MUSIC・1 DAY AGO
Daily Mail

They announced they were expecting their first child together earlier this month. And Amy Walsh, 34, hinted at her baby's due date during an appearance with her beau Toby Alexander-Smith, 31, on Loose Women on Friday. Joking that her grandmother disliked having her birthday in December, the expectant Emmerdale actress...
CELEBRITIES・9 DAYS AGO
Amomama

Several decades since "Cool Runnings" aired, the cast members have gone on to live different lives, and one of the stars, Leon Robinson, has a grown-up daughter who once came out. Meet her. Cool Runnings will be marking its 28th anniversary since it hit the screens in the '90s. The...
CELEBRITIES・19 HOURS AGO

A young mom, Sophie Crehan, was thrilled and touched at a young boy’s gesture toward her two-year-old daughter. Playing the claw machine is half luck and half skill, but no one gets to grab a toy most of the time. This was what Sophie Crehan experienced at the Lymewood Farm restaurant in Haydock, England.
KIDS・1 DAY AGO
Amomama

E-40 has amassed incredible fame and fortune in the music industry despite his tough childhood and addiction problems. In addition to his successful career, he is also a committed husband and a supportive father. Earl Tywone Stevens Sr., popularly known as E-40, has been in the rap game for several...
RELATIONSHIPS・3 DAYS AGO
Amomama

Women Are Denied Entry into Nightclub over 'Inappropriate' Footwear

A group of friends was stranded outside of a club after being banished for wearing inappropriate footwear. One infuriated TikToker was not about to let this slide, deciding to take aggressive action. Annabel Kershaw posted a clip on her TikTok account complaining about a nightclub called "History" in Manchester, England....
THEATER & DANCE・2 DAYS AGO
Amomama

Basketball player Stephen Curry went all out to show how much his marriage to cookbook author Ayesha Curry means to him by surprising her with a romantic backyard vow renewal. Ayesha Curry revealed on Instagram that her adoring husband Stephen Curry executed a surprise vow renewal to celebrate their 10th wedding anniversary, making her long life dream come true. She wrote:
RELATIONSHIPS・1 DAY AGO

Father Abandons Son Twice, Then Karma Hits Him Hard – Story of the Day

My father left when he divorced my mother and didn’t return to my life until I was an adult. Sadly, he abandoned my family and me once again, and it was hard to forgive. But karma taught him a big lesson. The only thing I knew about my father growing...
FAMILY RELATIONSHIPS・1 DAY AGO