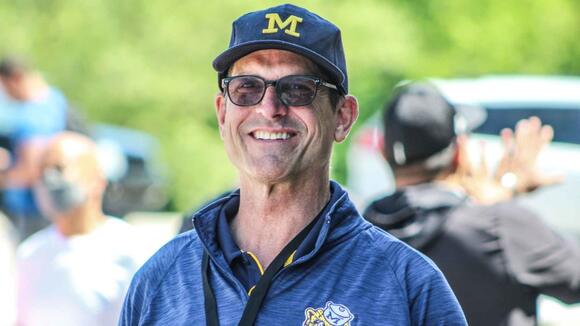 As Michigan's Jim Harbaugh prepares for his seventh season as head coach of the Wolverines, many are wondering when - or if - the man once dubbed the 'Savior' of Michigan can live up to the hype that surrounded his hiring.

At this point in his coaching tenure, Harbaugh's name often appears on many coaching lists and not necessarily for the best reasons. Just recently, Dennis Dodd, a national college football writer for CBS Sports, placed Harbaugh at No. 6 overall on the coaching hot seat heading into the 2021 season. Here's what Dodd had to say about Harbaugh's placement on the list.

"We don't have to tell you. Michigan sent the message loud and clear: Win now. The 2-4 mark in 2020 tied for the worst of Harbaugh's career. Before the season, he was the only Power Five coach with less than two years on his contract, making it difficult to recruit. The result? An incentive-laded deal through 2025, the only factor that keeps Harbaugh from a 5. After six years of being slapped around by Ohio State, the burden is on Harbaugh, who still hasn't so much as won a division as an FBS coach. The extension was signed in time to land a class that included five top 100 players. Now the task is developing a difference-making QB and beating OSU, neither of which Harbaugh has been able to accomplish yet. If he does, it would be one of the greatest rallies of Captain Comeback's career."

While being on a coaching hot seat list is far from ideal, Harbaugh also made another list recently - this time taking the No. 1 spot. ESPN's Adam Rittenberg recently put together a list that ranked active coaches who were previously college players. According to Rittenberg, Harbaugh it doesn't get any better than Jim Harbaugh.

Here's what Rittenberg had to say about Harbaugh's placement on the list.

1. Jim Harbaugh, Michigan Wolverines: Harbaugh retains the top spot after a decorated career as both a college and NFL quarterback. The son of college coach Jack Harbaugh finished third in Heisman Trophy voting in 1986, when he won Big Ten MVP and earned All-America honors. His career pass efficiency mark (149.6) led the NCAA for 12 years. A first-round pick of the Chicago Bears in 1987, Harbaugh played portions of 15 NFL seasons, reaching the Pro Bowl and earning AFC offensive player of the year honors with Indianapolis in 1995.

Through three weeks, Michigan has been dominant on the ground and somewhat untested as a passing team. Last week against NIU, Michigan didn't throw it much, but Cade McNamara hit a couple of big plays including a monstrous 87-yarder to Cornelius Johnson. I don't expect the approach to change this week as U-M faces a less talented and porous rush defense in Rutgers. The Wolverines are favored by a whopping 20.5 points, which is a lot against a Big Ten opponent, but that honestly doesn't feel like enough. If Michigan could run, run and run some more for three weeks straight, it should be able to against Rutgers as well.
MICHIGAN STATE・8 HOURS AGO
WolverineDigest

Make Your Pick: Michigan vs. Rutgers

Michigan is a 20.5-point favorite over visiting Rutgers tomorrow, which is a really big number against a conference opponent. Still, it feels like Michigan could cover that kind of spread against a team that struggles to stop the run and hasn't really been tested. Rutgers is an impressive 3-0, but the wins have come over Temple, Syracuse and Delaware — not exactly a murderers' row. Michigan should win easily, but what will the score be? We try our hands at figuring that out ourselves...
MICHIGAN STATE・18 HOURS AGO
WolverineDigest

Lead By Dominant Rushing Attack, The Michigan Offense Is Putting A Lot Of Points On The Board

Michigan fans have certainly enjoyed the offensive explosion they've seen from the Wolverines over the last three weeks of the 2021 college football season. Heading into its week four matchup against 3-0 Rutgers, No. 19 Michigan has produced the nations top rushing attack with a total of 350.3 yards per game and 15 touchdowns. Though Michigan ranks No. 16 in total yards per game, the Wolverines are averaging 47.0 points per game - good for No. 4 in the nation.
MICHIGAN STATE・14 HOURS AGO
WolverineDigest

Just Three Weeks Into The Season, Cade McNamara Is Already Cementing His Name In The Michigan Record Books

The Michigan Wolverines have gotten off to a hot start on the ground in 2021, featuring the nations No. 1 rushing attack - spearheaded by senior Hassan Haskins and sophomore Blake Corum. Due to the tremendous success of the rushing game, junior quarterback Cade McNamara has had a relatively easy...
MICHIGAN STATE・1 DAY AGO

It seems like the script is easy to predict for Michigan's game against Rutgers, but you never know. Last year against the Scarlet Knights, it took three overtimes and, while it was on the road in an empty stadium, Michigan did eke out a win. Obviously that was a knock down, drag out fight in Piscataway, but can you put any value on anything from the 2020 season? With all of that considered, we do our best to predict some happenings and the score for tomorrow's game.
COLLEGE SPORTS・2 HOURS AGO
WolverineDigest

For This Michigan Team, Its 'More Than Just Confidence'

The Michigan football team is off to a much better start this season and the stark contrasts from last year go beyond the playing field. Players are much more positive about the team’s approach and this renewed energy has played a big role in the Wolverines 3-0 start. But the...
MICHIGAN STATE・2 DAYS AGO
WolverineDigest

It’s no secret that Rutgers has not fared well since entering the Big Ten in 2014. With the Scarlet Knights owning a record of 10-51 against Big Ten opposition during this period, to describe Rutgers' performance as “mediocre” would be a little too kind. And the Scarlet Knights have done...
COLLEGE SPORTS・2 DAYS AGO
WolverineDigest

Cade McNamara isn’t concerned with the run-heavy offensive attack. The junior quarterback’s passing numbers to this point do not jump out. He’s 24-of-37 for 371 yards and 3 touchdowns. This would be a great performance for one game, but not exactly a stellar stat line for a three-game stint. Still, McNamara’s confidence hasn’t wavered.
COLLEGE SPORTS・2 DAYS AGO

Michigan went 2-4 in 2020 and, while the football was pretty bad, it looked like there were issues within the program that extended beyond the field. Those concerns were confirmed during the offseason as Jim Harbaugh cleaned house and hired six new assistants. One of those assistants is former Michigan...
MICHIGAN STATE・2 DAYS AGO
WolverineDigest

The home game against Rutgers isn't shaping up to be a huge recruiting weekend but a few prospects are still expected to make their way to Ann Arbor. Combine that with prospects trimming lists, recapping their visits and competing for their high school teams, and there's plenty to talk about.
ANN ARBOR, MI・1 DAY AGO
WolverineDigest

Michigan is favored by 20.5 points over Rutgers, which seems like a lot, but even those who cover the Scarlet Knights see the game getting out of hand on Saturday. Richie Schnyderite of The Knight Report breaks down exactly why Rutgers will have its hands full against the Wolverines this weekend.
MICHIGAN STATE・2 DAYS AGO
WolverineDigest

Michigan has been dominant on the ground in all of its first three games and it should happen again this week against Rutgers. The Wolverines are favored by 20.5 points against the Scarlet Knights and should roll to 4-0 and 1-0 in the Big Ten. How they plan to get there isn't even a secret at this point. Michigan loves to run the ball and no one has been able to stop them so far. Rutgers is better than NIU, but will still have its hands full against U-M.
MICHIGAN STATE・2 DAYS AGO

Once again Blake Corum stops by to talk after a monster game against Northern Illinois. The sophomore running back simply can't be stopped through three games and is now leading the country in rushing touchdowns and all-purpose yards per game. He found the end zone three more times against the Huskies and had another long touchdown run where he erased an angle with pure speed.
MICHIGAN STATE・3 DAYS AGO
WolverineDigest

Prior to our fourth interview with Michigan running back Blake Corum on Monday, I received a text at 6:53 PM that read, "running behind a little, just got out of practice." Normally we start our live broadcast at 7:00 PM, so we figured we'd get the show started and bring Blake on for a later segment. Instead, Corum sprinted back to his home, logged on the computer and was ready to field our many questions at 7:06 PM.
FOOTBALL・3 DAYS AGO
WolverineDigest

Here's the entire story from Eagle Maven... It was just a 17-11 defeat in Week 2 of the 17-game season, a setback to a team with Super Bowl aspirations in the San Francisco 49ers, but a sense of real loss hung heavy in the Eagles’ postgame locker room. Brandon Graham...
NFL・3 DAYS AGO
WolverineDigest

They say that a team's football season doesn't really start until they put on the white jerseys so for Michigan, that's next week in Madison. Earlier today we all found out exactly when that will happen. The No. 19 Michigan Wolverines will take on the No. 18 Wisconsin Badgers inside...
COLLEGE SPORTS・4 DAYS AGO

Inglewood (Calif.) High pro-style quarterback Justyn Martin has been committed to Cal since January but he's still getting attention from several schools including Michigan. He was in Oxford, Miss. over the weekend and seems to be pretty intrigued by what Lane Kiffin is doing with Matt Corral. He's also intrigued by the Wolverines.
MICHIGAN STATE・4 DAYS AGO
WolverineDigest

After Michigan pummeled Northern Illinois by 53 points, Jim Harbaugh was a pretty happy camper at the podium. He praised just about every player on his team and really seemed pleased with how things have played out through three weeks. Here are some of the best things he said following U-M's blowout win.
ILLINOIS STATE・5 DAYS AGO
WolverineDigest

It took exactly three weeks into the 2021 season for the Michigan Wolverines to make the transition from Big Ten underdog to Big Ten favorite, at least according to the latest FPI released from ESPN. After a dominant 3-0 start, the Wolverines are suddenly predicted to win the remainder of...
MICHIGAN STATE・5 DAYS AGO
WolverineDigest

Is it fair to say that the Oct. 30 matchup in East Lansing between No. 19 Michigan and No. 20 Michigan State is starting to look like a pretty big deal?. The Wolverines and the Spartans are both 3-0 through the first three weeks of the 2021 season, with both programs showcasing a rushing attack that looks nearly unstoppable.
MICHIGAN STATE・5 DAYS AGO