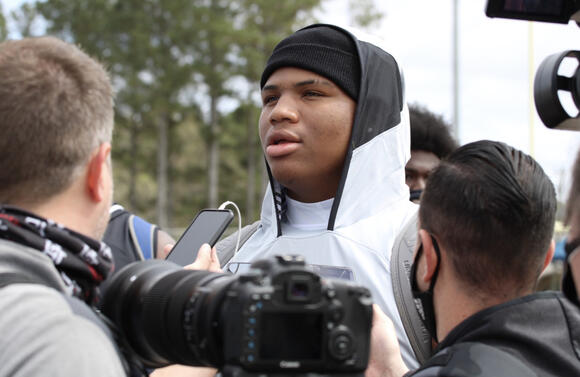 Yesterday Walter Nolen was named the nation's top player in the 2022 recruiting class, according to the ESPN 300. Last week, he released his top five (likely final) schools, and it included a few significant shakeups from his previously released top eight list from April. LSU, Oregon, Ohio State, and USC all fell off the list, while Tennessee, who was not on the original list, re-entered the race. We provide some insight into the Vols rise.

June kicked off a flurry of recruiting visits for prospects across the nation. Numerous 2022 players rushed to fit all five official visits into the month to attempt to make a decision before their high school season.

Nolen did not use five official visits, but the elite prospect took at least eight trips during the month, including an early trip. Tennessee got Nolen on campus in an unofficial capacity, and the visit set the tone for the Vols to make up ground in the recruitment. Nolen and his family spent approximately ten hours on campus with Rodney Garner and the Tennessee staff during the visit, according to sources.

Later in the month, Nolen returned again in an unofficial capacity, and the relationship continued to grow, but Tennessee's pitch to Nolen has always remained the same.

"I am probably going to say Coach G and the recruiting staff," Walter Nolen Sr. told Sports Illustrated about the reasoning behind Tennessee's rise. "When they came in, from day one when they got there, they were like we have to have Walter. He is a top priority for us. Just looking at Coach G's body of work— 30 plus years—multiple kids go on to the NFL. He is really good at what he does, so that was a big plus for them."

Tennessee has offered both of Nolen's little brothers, Warren and Waylon, and the Vols became the first school to offer Waylon. This was another big deal for the elite prospect. Both of the little brothers already project as top players in their class, but for Tennesee to make the offer to both meant a great deal.

Now, with a huge month of June behind them, Nolen continues to eye an August decision, and his father believes it is still possible.

"Knowing him, it is possible," Nolen Sr. said. "He had originally said December, but I was like, 'Nah.' It will be done before then. It is quite possible."

Nolen has plenty of question marks around him entering the fall. Where will he play high school ball? Where will he visit during the last week of July when things open up for a week? Where will he commit in August?

Nolen previously played at St. Benedict's at Auburndale in Memphis, but after former Vol Marlon Walls, Nolen's mentor, stepped down as head coach, it does not appear the elite prospect will return there. The option of staying in Tennessee, possibly even East Tennessee, remains on the table, which would be key for the Vols. However, a return to the national powerhouse IMG Academy remains a possibility. Something will break on this front in the coming days, as IMG reports back on the 19th of the month, while other schools across the country are already getting to work.

As far as the end of July visits, who knows? The Nolen family is not sure at this time.

"We haven't decided about the last week of July," Nolen Sr. said. "A couple of coaches have hinted about it, but nothing definite. It is possible we go somewhere, but we could end up not going anywhere. It just depends."

The Vols will certainly hope to get him back on campus one more time before he enters decision mode.

Kentucky ATH Conyer Ready for Another Look at Vols

South Warren (Ky.) athlete Christian Conyer will make his second trip to Knoxville since being offered by the Vols in late April. Conyer most recently visited Tennessee in late June when the recruiting period re-opened. Since then, he has remained in contact with Tennessee's staff, and they have been consistent...
KNOXVILLE, TN・13 HOURS AGO
VolunteerCountry

Josh Heupel's team is banged up heading into week three of the season. The Vols will have an opportunity to clean up several things tomorrow and work plenty of depth against Tennessee Tech, but before they do, we take a look at their injury report. Cooper Mays- Mays left the...
TENNESSEE STATE・3 HOURS AGO
VolunteerCountry

Host Jack Foster and Jake Nichols go over the Vols' Week 3 matchup that should not be close, but will serve as a great opportunity for Tennessee to fine tune many aspects of their game heading into their first road matchup against the Gators in Week 4. Byron Young will make his Tennessee debut Saturday, what does this mean for Tennessee's pass-rush? Listen for a full preview and more on the latest edition of the VR2 on SI Podcast!
TENNESSEE STATE・8 HOURS AGO

Tennessee basketball has been a bright spot in UT athletics over recent years, and the 2021-2022 season shows promise to be a solid campaign. And Blue Ribbon Report agrees. Per Chris Dortch of the Blue Ribbon Report, Tennessee slides into the top ten on the list as the 10th best team. The Tennessee Basketball Twitter page released Dortch's article with the official list in the tweet below:
KNOXVILLE, TN・1 DAY AGO
VolunteerCountry

After an historic 2021 season for Tennessee Baseball, expectations and excitations for this team will be higher heading into 2022 than the past several years. Following the Vols' first SEC Tournament Championship appearance since 1995 and their first Omaha appearance since 2005, Tennessee will have their fair share of rigorous SEC series to showcase their mettle once again.
BASEBALL・1 DAY AGO
VolunteerCountry

How to Watch, Listen: Tennessee vs. Tennessee Tech

Tennessee will host its third game of the season this Saturday in Neyland Stadium in a matchup against the Tennessee Tech Golden Eagle. Tennessee will look to fine tune multiple phases of the game before SEC play kicks off in week four with a trip to Florida. Here is how...
TENNESSEE STATE・1 DAY AGO
VolunteerCountry

Lane Kiffin Wants to See ‘ManningCast’ for Tennessee-Ole Miss, And Who Can Blame Him?

At SEC Media Days this summer, we asked Lane Kiffin about his return to Neyland Stadium when Tennessee faces Ole Miss on October 16th. Kiffin, of course, gave an excellent answer on Vol fans and Neyland’s environment, which you can see in the video above. But in his return, Kiffin...
KNOXVILLE, TN・1 DAY AGO

Does Josh Heupel have quarterback controversy on his hands? He says no, but there are certainly several questions left to be answered at the position. Heupel's backfield is also limited in numbers with Jabari Small and Tiyon Evans, Tennessee's 1-2 punch both battling through their own problems. Heupel addressed each topic during today's SEC teleconference.
NFL・2 DAYS AGO
VolunteerCountry

Tennessee (1-1) should improve to 2-1 on the season with Tennessee Tech next up on the schedule, before traveling south to Gainesville to take on Florida (2-0). The Vols will be coming off a tuneup game in which they will hope to find more answers at quarterback, while the Gators will be on the heels of playing in the game of the week against top-ranked Alabama.
FLORIDA STATE・4 DAYS AGO
VolunteerCountry

A Look at Tennessee's Freshmen, Transfers Against Pitt

Tennessee stumbled at home on Saturday in a 41-34 loss to ACC foe Pitt. The second game of the Josh Heupel era saw the Panthers erase an early 10-0 deficit en route to a hard-fought road victory in Neyland Stadium. Once again, we take a look at how Tennessee's newcomers (freshmen and incoming transfers for the 2021 season) fared in the matchup.
TENNESSEE STATE・4 DAYS AGO
VolunteerCountry

Breaking: Vols Get NCAA Determination on Eligibility for LB Young

For the last two weeks Tennessee did not have prized edge rusher Byron Young available due to an eligibility issue from a prep school in Mount Vernon (Ala.). Heupel addressed the media on Monday morning for the first time before Saturday's noon kickoff against Tennessee Tech and stated that Young will be eligible for Saturday's contest and the rest of the season moving forward.
COLLEGE SPORTS・4 DAYS AGO

Just In: Vols Without Four Players against Pitt

The Vols are warming up on Shield-Watkins field inside of Neyland Stadium as the minutes countdown to the kickoff of the "Johnny Majors Classic", but they will be without prized running back Tiyon Evans, starting center Cooper Mays, edge rusher Byron Young, and defensive lineman LaTrell Bumphus. The Evans new...
KNOXVILLE, TN・6 DAYS AGO
VolunteerCountry

Tennessee returned to Haslam practice field on Tuesday morning as they continue preparation for the weeks ahead. You can watch highlights from the practice in the video above. Did you know VR2 on SI does Podcasts? Check out the staff's latest breakdowns here. VR2 on SI is also on Instagram,...
TENNESSEE STATE・3 DAYS AGO
VolunteerCountry

KNOXVILLE, Tenn. -- In a video released during the week leading into Tennessee's showdown with Pittsburgh in the inaugural Johnny Majors Classic, Majors could be seen encouraging his Vols with an often-used stanza: "Attack, attack, attack -- always attack!" On Saturday, wearing orange pants in the late Majors’ honor, Josh...
KNOXVILLE, TN・6 DAYS AGO
VolunteerCountry

Joe Milton was sporadic before leaving the contest with a leg injury, and Hendon Hooker came in to replace him. Hooker had some bright spots, and he had some struggles. Hooker did enough to allow the Vols to keep the Vols in the game despite falling down two scores. Milton had one long run, but Hooker looked like the more natural runner. He extended plays, and he had one crucial run on third and long to extend a drive that led to a touchdown.
COLLEGE SPORTS・6 DAYS AGO
VolunteerCountry

The Tennessee Volunteers fell 41-34 to the Pittsburgh Panthers in the inaugural 'Johnny Majors Classic.' Despite the Vols' ability to get out to a 10 point lead early, Pittsburgh took advantage of opportunities and capitalized in the second quarter, taking a 27-20 lead by halftime. Despite Hendon Hooker making some noise in the second half after replacing an injured Joe Milton at quarterback, allowing too many successful Pitt drives, incurring too many penalties, injuries, and one too many turnovers thwarted the Vols' attempt to comeback.
COLLEGE SPORTS・6 DAYS AGO
VolunteerCountry

Just In: Two Vols Offensive Weapons Out for Remainder of Contest Against Pitt

Tennessee was already shorthanded in the backfield for this matchup against Pitt, and the Vols have lost Jabari Small for the remainder of the contest, according to ESPN. Small was Tennessee's top back coming into the contest, and this leaves them with a group of freshman that have just a handful of carries among them. Small went to the sideline on the last play of the half with what appeared to be a shoulder injury.
COLLEGE SPORTS・6 DAYS AGO
VolunteerCountry

Things did not go Tennessee's way today as Pitt handled the Vols in the first edition of the Johnny Majors Classic, but we still hand out game balls to individual player performances in each phase of the game. Offense. Tennessee scored 34 points today against Pitt, but it was not...
COLLEGE SPORTS・6 DAYS AGO
VolunteerCountry

Vols Make QB Change in First Half Against Pitt

After some early inaccuracies from Joe Milton III in Tennessee's matchup against Pitt, Josh Heupel made a quarterback change midway through the second quarter. Milton came up limping after a strip sack, and the Vols quickly turned to Hendon Hooker. Milton is currently 7-12 for 50 yards and has added...
COLLEGE SPORTS・6 DAYS AGO