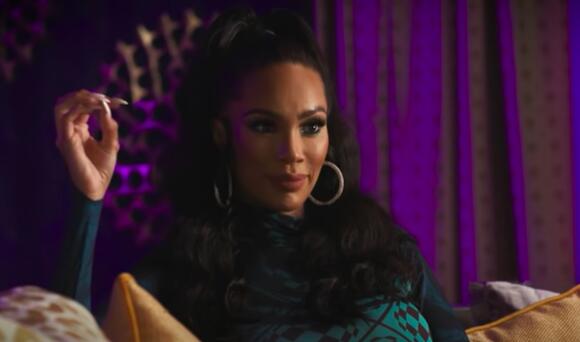 Her estranged husband, Safaree Samuels, has filed a lawsuit against the mother of three, claiming she damaged $30,000 of his personal property.

According to a new report, Erica “destroyed two motorcycles and a four-wheeler motorbike by pouring paint all over the motorcycles, and directly into the exhaust pipes and gas tanks of all the vehicles. He says her goal was pretty clear, render his beloved bikes useless.”

Safaree also asked the judge to hold Erica in contempt for violating their domestic relations standing order, per TMZ. He says he has receipts to back up his claims.

The order bars either of them from harassing each other or destroying each other’s property during the divorce.

Kaylin used to star on the show and is the ex of rapper-turned-podcaster Joe Budden.

Erica gave birth to Safaree’s son just a week prior to the accusations.

“@Kaylin_Garcia real talk I been in the shoes of dealing with a man who lived a double life and I had no clue he was married. But you ! Know Safaree is married,” the reality television star wrote on Instagram Story.

“Who don’t know that. Not to mention he real friends with Joe Budden your ex. Safaree just had a baby who he hasn’t seen in 4 days that’s in the NICU. That’s also no secret. I’m blasting both of you since he told you to lay low tonight–clearly you both know I found out y’all been f–king all weekend. My son not even a week old yet and he d–king you down. I hope this is something you proud of shorty. This man lost his whole family officially. I wish you both the best.”

Yes, it’s true: ex and current spouses to the same partner can get along as seen in the trailer to an upcoming episode of Red Table Talk, a Facebook Watch series co-hosted by actress and wife to megastar Will Smith, Jada Pinkett Smith. In the trailer, Sheree Zampino, Smith’s...
CELEBRITIES・26 DAYS AGO
Shine My Crown

About every 30 days or so, supermodel Tyra Banks begins to trend on Twitter – and it’s rarely for anything good. During last Monday’s taping of Dancing With Stars, themed after Elvis Presley, Banks made what some are calling a “creepy” comment about TikTok star Charli D’Amelio, who successfully emerged as a frontrunner for the show’s 31st season. After performing Presley’s Bossa Nova Baby with dance partner Mark Ballas, Banks commented on D’Amelio’s neck.
THEATER & DANCE・8 HOURS AGO
Shine My Crown

The Real Housewives of Atlanta star Porsha Williams has remained relatively silent about wedding plans since revealing she became engaged to investor Simon Guobadia in May 2021. But in a recent Instagram post, she may have confirmed that she and her “hubby” are already married. “When the husband...
CELEBRITIES・28 DAYS AGO
Shine My Crown

Social media influencer Kiara Moore and her BFF finally took that long-needed girls trip and ended up having dinner with rap icon, Nas. While vacationing in Turks and Caicos, Moore posted a video on TikTok of her friend being served cake during her birthday dinner. While singing happy birthday, Nas, who was seated at a table near them, raised a glass and made a toast. Moments later, he approached their table and had drinks with the ladies.
CELEBRITIES・27 DAYS AGO

Beyoncé paid homage to her singer and songwriter sister Solange Knowles online over the weekend for becoming the first Black woman to compose an original score at the New York City Ballet (Gianna Reisen’s Play Time) for the 10th Fall Fashion Gala at Lincoln Center. And some fans are speculating that one cryptic line in her post could be a dig at her husband and rapper extraordinaire JAY-Z.
NEW YORK CITY, NY・19 HOURS AGO