NFL MVP odds 2021: Derrick Henry makes push, but which QB is on top?

By Andrew Buller-Russ
Sportsnaut
4 days ago 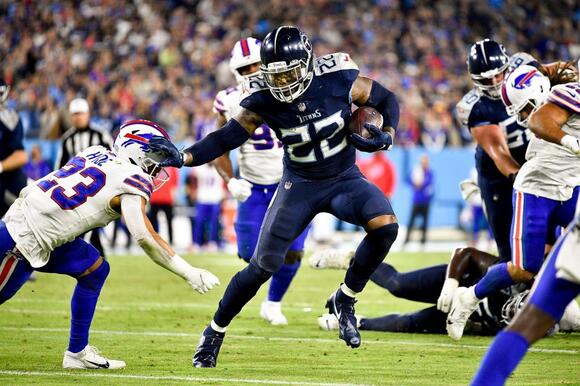 The NFL MVP odds have received a big update as we near the trade deadline of the 2021 NFL season, and after the game Dak Prescott had, he’s become the favorite. With the Arizona Cardinals undefeated, Kyler Murray is Prescott’s closest competitor.

The two superstar quarterbacks have several contenders behind them but Buffalo Bills QB Josh Allen is his closest competitor so far.

Tampa Bay Buccaneers legend Tom Brady (+800) has picked up right where he left off in his 2020 Super Bowl season and has a chance to win his fourth MVP award if he can keep it up. After a rough start to his season, Green Bay Packers quarterback Aaron Rodgers has made his way back into the top five of the NFL MVP odds.

Here’s a look at the complete NFL MVP odds from DraftKings . 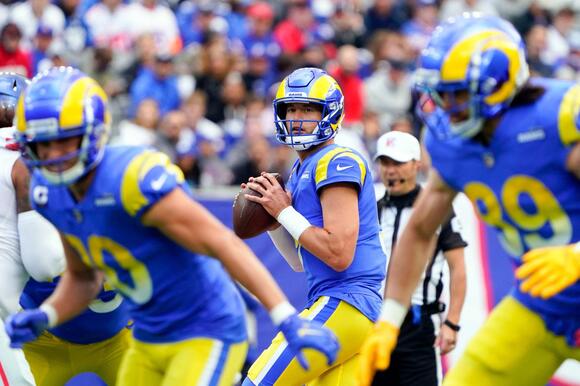 Bottom line: Through Week 6, there is still no clear-cut leader, with the favorite changing every week. We’re in a special era of football, with so many talented quarterbacks playing their best.

Moving down the line, how about Matthew Stafford at +1200?

Receiving a much-needed change of scenery after a dozen years in Detroit, the big-armed QB now has Rams offensive guru Sean McVay to dial up his plays. With the season he’s having, Stafford is generating some serious MVP betting action, especially after his dominant performances to bring the Rams to 5-1.

Among the true long shots, the tank that wears No. 22 on the Tennessee Titans, Derrick Henry at +2000 isn’t all that crazy. While a running back hasn’t won the NFL’s MVP award since Adrian Peterson did so back in 2012, Henry has the best chances of any current back.

Henry will have more than enough rushing yards to impress and now, the big back is also catching passes at an all-time high rate. This could actually happen.

When will the 2021 NFL MVP be announced?

Typically, the NFL MVP is announced at an awards show the day before the Super Bowl. That will once again be the case with the league’s top individual honor being announced before Super Bowl LVI on Feb. 4, 2022.

With the Packers off to a 4-1 start this season, the Aaron Rodgers drama that dominated the offseason seems like a distant memory. However, as soon as the 2021 season ends, there's a good chance that last year's drama is going to pick up right where it left off and that's because Rodgers still doesn't necessarily seem interested in staying in Green Bay.
NFL・12 DAYS AGO
WEEI Sports Radio

CBS NFL analyst Tony Romo was on the call for Patriots-Cowboys Sunday and put in a lousy performance, spouting nonsense and telling weird jokes.
NFL・9 DAYS AGO
CBS Sports

The Buccaneers wild win over the Patriots on Sunday didn't just allow Tom Brady to get revenge on his old team, the victory also allowed Brady to enter a very exclusive club. Thanks to the victory, Brady is now just the fourth quarterback in NFL history to defeat all 32 teams, joining Peyton Manning, Drew Brees and Brett Favre.
NFL・21 DAYS AGO
New York Post

Dak Prescott is learning the ropes of TikTok. On Wednesday night, the Cowboys quarterback spent quality time with girlfriend Natalie Buffett and their dog Bean, and documented the pair cuddled up on a bed. “Dak’s first TikTok… I expect nothing less,” Buffett wrote over the TikTok video that Prescott filmed...
NFL・26 DAYS AGO

Sometimes the answer is right before your eyes. Or, in this case, your ears. In the endless comments, analysis and hype this week preparing for Tom Brady’s Sunday night return to New England, leading his Super Bowl champion Buccaneers against his fledgling former Patriots team at Gillette Stadium, there was a truth-shall-set-you-free comment from Bill Belichick that didn’t get nearly enough attention.
NFL・25 DAYS AGO
The Spun

Legendary NFL quarterback Brett Favre had some pretty lofty praise for Dallas Cowboys quarterback Dak Prescott earlier this week. Favre, one of the greatest quarterbacks in NFL history, is a big fan of what he’s seeing from the Cowboys quarterback. Dallas is 2-1 on the season, coming off back-to-back wins...
NFL・23 DAYS AGO
New York Post

There was a lot for Dak Prescott’s girlfriend, Natalie Buffett, to celebrate on Sunday. There was the Cowboys’ 44-20 win over the Giants a “five-year anniversary” with Tyler Seguin’s girlfriend, Kate Kirchof, and “victory shots” with her fellow WAGs. Buffett documented her reunion with pal Kirchof — who also resides...
NFL・15 DAYS AGO
The Spun

CeeDee Lamb Reveals What He Told Dak Prescott After Game

Dallas Cowboys wide receiver CeeDee Lamb played hero at Gillette Stadium against the New England Patriots yesterday. He caught a touchdown pass from Dak Prescott in overtime to seal the win and lift the team to 5-1. After the game, Lamb had a message for his quarterback. Speaking to the...
NFL・8 DAYS AGO

As if a blowout loss to the Tennessee Titans was not enough headache for the Kansas City Chiefs, the team also lost quarterback Patrick Mahomes in the fourth quarter after he was hit in the head. Fortunately, though, head coach Andy Reid gave an update on his injury and noted that Mahomes has been cleared of the concussion protocol.
NFL・2 DAYS AGO
The Spun

Aaron Rodgers Reveals If He Got Fined For Taunting Fans

Aaron Rodgers added another layer to the rivalry between his Green Bay Packers and the Chicago Bears last weekend when he had some choice words for the opposing fanbase at Soldier Field. After scrambling for a late fourth quarter touchdown in Sunday’s win over Chicago, Rodgers taunted Bears fans in...
NFL・6 DAYS AGO
247Sports

The Dallas Cowboys shocked the NFL on Tuesday night with the decision to release linebacker Jaylon Smith, who is expected to sign with the Green Bay Packers. On Wednesday, rookie linebacker Micah Parsons was asked about the release of Smith and what it meant for his future. Parsons made it clear that he feels a door has now swung wide open for him.
NFL・20 DAYS AGO
The Spun

Colin Kaepernick was a major topic of conversation following the 49ers’ loss to the Green Bay Packers on Sunday night. Kaepernick, of course, had plenty of success against Green Bay during his professional career. He shredded the Packers defense in the NFL’s 2012 Divisional Round. It might have been the best game of Kaepernick’s career.
NFL・29 DAYS AGO

It was game day for two proud NFL teams yesterday, and fans far and wide came out to support the New England Patriots and the Tampa Bay Buccaneers. Among those dedicated fans was Tom Brady’s wife Gisele Bündchen and the couple’s two kids — 11-year-old son Benjamin Brady and 8-year-old daughter Vivan Lake Brady. As the game carried on, the longtime model posted a selfie to Instagram featuring her two kids, and we couldn’t get over how much Vivian looked just like her mom!
NFL・22 DAYS AGO
FanSided

3 Chiefs who are on notice after embarrassing loss to Titans

The Chiefs were throttled by the Titans in Week 7 and these Kansas City players are definitely on notice as key contributors to the team’s issues. It’s hard to imagine things getting much worse for the Kansas City Chiefs. With fans already skeptical of how the team had looked through six games, they went on the road to Tennessee and got trashed by the Titans, 27-3.
NFL・2 DAYS AGO
The Spun

CeeDee Lamb scored the game-winning touchdown for the Dallas Cowboys against the New England Patriots last week. The Cowboys topped the Patriots, 35-29, in overtime at Gillette Stadium last weekend. Dallas improved to 5-1 on the year with the win over New England. Lamb made sure to taunt the Patriots...
NFL・2 DAYS AGO

The Dallas Cowboys and the New York Giants met in The Star on Sunday afternoon for one of their two annual rivalry games. Unfortunately for the latter, the contest didn’t go according to plan in the first quarter. The Giants labored to get any momentum on offense at the beginning...
NFL・16 DAYS AGO
The Spun

Aaron Rodgers let the entire world know that he “owns” the Chicago Bears during a 24-14 win over the Green Bay Packers’ arch-rival. Interestingly, Tom Brady decided to weigh in on Rodgers’ now-viral comment. In his latest podcast with SiriusXM Radio, Brady jokingly congratulated Rodgers on his “shareholder” stake in...
NFL・6 DAYS AGO
FanSided

A lucky Bucs fan ended up with Tom Brady’s 600th career touchdown pass during the game against the Bears. What did Tampa give him to give it up?. Tom Brady has thrown a ton of valuable touchdown passes in his career. His second one on Sunday was particularly special. The...
NFL・2 DAYS AGO
Bleacher Report