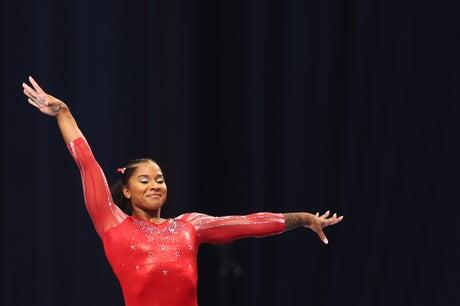 US Olympic gymnast Jordan Chiles’s mother will enter prison on the same day that her daughter competes for gold at the Tokyo Games.

Gina Chiles will start a one year and one day prison sentence as the women’s team is expected to compete in the Olympics final.

The 20-year-old Oregon-born gymnast is competing in her first Games and is part of the four-person artistic gymnastics team.

Her mother, Gina Chiles, pleaded guilty to stealing from clients and spending hundreds of thousands of dollars on personal expenses through her property management company, Inspire Vision Property Management LLC.

She pleaded guilty to one count of wire fraud and when she has completed her prison sentence has been ordered to begin paying $1.2m in restitution.

“Every moment that I watch Jordan is the most amazing moment as a mom,” Gina Chiles said as she appeared on the NBC’s Today show.

“And so I just am looking at it as not bittersweet, but just sweet, period, that she’s here.”

She must surrender to the US Bureau of Prisons before 2 pm on 27 July.

Federal court papers state that one client, Karla Pearlstein, lost $945,000 after renting the Victorian Belle Mansion in North Portland, Missouri, to Gina Chiles to run as a wedding venue.

Ms Pearlstein, who helped Gina Chiles start Inspire Vision, describes her to CBS42 as “somebody that has absolutely no shame. She is an operator. I mean, she was a total operator”.

Court documents state that over nearly four years Chiles “had stolen so much she could no longer cover the resulting shortfalls by moving clients’ money around”.

Jordan Chiles will have support at Tokyo from one of her closest teammates, Simone Biles.

“Simone really pushes because she pushes herself,” Simone’s mother Nellie Biles said of their friendship.

“And I see her doing the same thing, too, with Jordan,” Nellie added.

“And that bond has just – I mean, they fight, believe me. They do fight. We don’t get into it. I don’t get in the way because the next minute, they’re hugging. That’s a special relationship that they have.”

So, why is this here? If you do the crime, do the time. Do you ever think about poor victims? For the sake of the athlete, this should not be even published.

So unnecessary to put this out there. Not news worthy for the whole world to know. Don’t you think her daughter is embarrassed enough. Shame on you. 🤬🤬🤬🤬🤬

wrong..they post boned it till next month so she could support her daughter.that wouldn't have happened had she been a regular girl instead of a Olympian

Simone Biles made her Met Gala debut on September 14th in New York. She showed up at the event in a magnificent outfit, which left much talking. Check out the comments from fans about her appearance. American gymnast Simone Biles was a star at the 2021 Met Gala in New...
BEAUTY & FASHION・3 DAYS AGO
CBS News

An Australian swimmer who won a gold medal at the Tokyo Olympics and competes for Los Angeles' team in the International Swimming League has been hospitalized after testing positive for COVID-19. Madison Wilson, 27, said she's fully vaccinated against the coronavirus when she announced on Instagram she'll be receiving treatment at a hospital.
PUBLIC HEALTH・1 DAY AGO
foxsanantonio.com

Shelly sat down with Olympic Silver Medalist, Jordan Chiles, to talk about her time representing the United States, her friendship with Simone Biles, and how you can catch her and other elite gymnasts in the Gold Over America Tour next month.
SAN ANTONIO, TX・10 DAYS AGO
KUTV

Utahn competed in fencing at the 2020 Tokyo Paralympics

REXBURG —- A legally blind Brigham Young University-Idaho student competed in a once-in-a-lifetime experience at the Tokyo Paralympics last week. “It’s a dream come true. It just shows how much hard work, dedication, and perseverance pays off. You can do anything that you set your mind to,” said 20-year-old Taylor Talbot.
SWIMMING & SURFING・14 DAYS AGO
Yale Daily News

Olympians among us: Meet the 19 Yalies who competed in Tokyo

Some are back in Yale classrooms this fall. Others have already graduated from the University. Read up on the current and former Yale students and staff who represented thirteen different countries over seven sports at the 2020 Tokyo Olympics: baseball, basketball, fencing, rhythmic gymnastics, rowing, sailing and track and field.
SPORTS・9 DAYS AGO
jcitytimes.com

…Gold medal in Gymnastics (Talent) There is a lot in common with being a woman founder and a gold medal gymnast. You need unlimited amounts of strength, flexibility, grace and great timing. You have to take time to build your talent. That is never easy. It takes endless days of training and hard work and a pile of breaks and bruises. But no matter how black and blue you feel, when it is your turn, you must look around with confidence. You also need great coaches and trainers to be at your best. You are part of a team and the team you build around you makes the difference in the toughest business competitions.
SMALL BUSINESS・5 DAYS AGO

Yesterday (Sept. 15), Simone Biles gave an emotional testimony before the Senate Judiciary Committee about the sexual abuse she suffered by former USA Gymnastics team doctor Larry Nassar. Now, Biles is preparing to go on tour. The 24-year-old is part of the Athleta Presents Gold Over America Tour, which is...
POLITICS・5 DAYS AGO
WMIL FM106.1

"People are like 'Oh, she quit,' but I'm not a quitter - I'm a fighter," Biles explained in a teaser of her next Facebook Watch docuseries episode.
CELEBRITIES・1 HOUR AGO
perrytonherald.com

A number of Hoosiers took to the pool at the Tokyo Olympics in July and August. Twelve current and former Indiana swimmers and divers competed in the games. Indiana’s head diving coach Drew Johansen and head swimming coach Ray Looze joined the athletes as coaches for the United States team.
INDIANA STATE・8 DAYS AGO
hngn.com

MS-13 is the most notorious gang from L.A., with a reputation for heinous crimes in places that take root. Their members are known to be the most savage gang with an international reputation. If the name is mentioned in places where they are active, their mention the gang's name, and...
PUBLIC SAFETY・22 DAYS AGO
Vice

MEXICO CITY — A famous Mexican television host is on the lam after being accused of embezzling billions of pesos. Inés Gómez Mont and her lawyer husband, Víctor Manuel Álvarez Puga, reportedly fled Mexico as the authorities prepared to issue an arrest warrant against the couple alleging illicit enrichment and embezzlement. The Mexican prosecutor's office has begun the process of requesting Interpol to issue an international red notice for both Gómez Mont and Álvarez Puga, who are believed to be hiding out in the United States.
CELEBRITIES・1 DAY AGO
firstsportz.com

From being one of India’s brightest hopes at the Tokyo Olympics to winning the nation’s first Olympic medal in track and field events, Neeraj Chopra has come a long way in the last month or so. While Neeraj’s surreal feat in Tokyo made him a household name in the country, the ace javelin thrower has gained immense popularity on social media.
CELEBRITIES・7 DAYS AGO

By now, you would have to be living in a remote corner of the solar system not to have heard of Gabrielle (“Gabby”) Petito. The 22-year-old American woman was on a summer road trip with her fiancé when she was reported missing. A body that matches her description has been found in the woods of Wyoming. Her fiancé, Brian Laundrie, is now on the run.
PUBLIC SAFETY・18 HOURS AGO
The US Sun

BRIAN Laundrie appeared to upload and save a series of "disturbing" images on Pinterest in the weeks before his fiancee Gabby Petito vanished during their cross-country road trip. Laundrie, 23, has not yet been named a suspect in Petito's disappearance but is considered a person of interest. He returned home...
PUBLIC SAFETY・22 HOURS AGO
The Independent

Climber receives apology after inappropriate images of her shown on TV

The International Federation of Sport Climbing (IFSC) apologised to climber Johanna Farber after inappropriate images of her were shown during the World Championships in Moscow.It was reported last week that the event’s broadcaster aired a close-up replay of the Austrian athlete’s bottom during the boulder semi-final.In a statement, the IFSC wrote: “The IFSC condemns the objectification of the human body and will take further action in order for it to stop, and to protect the athletes.“After meeting with representatives of the Austrian team, IFSC President Marco Scolaris issued the following comment: ‘How many times will things have to be done...
ENTERTAINMENT・1 DAY AGO
dreddsinfo.com