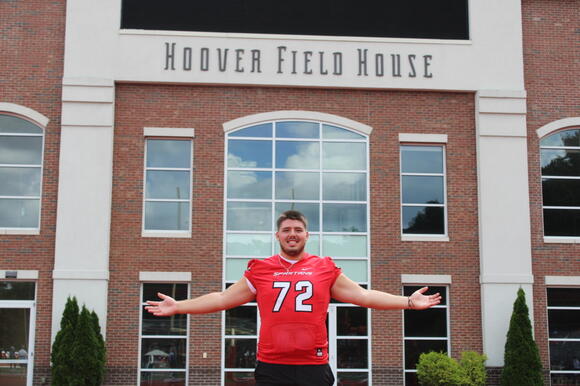 Tennessee’s top offensive lineman target in the 2022 class is down to three schools he goes in depth on each finalist in the video above.

KNOXVILLE, Tenn. — After Tennessee’s 56-0 win over Tennessee Tech on Saturday, Vols wide receiver Velus Jones Jr. fielded a question about his gold necklace. There was good reason for the question, as Jones’ necklace has a tiny golden goat — yes, goat — on the chain. As it turns...
FLORIDA STATE・4 HOURS AGO
VolunteerCountry

Tennessee (2-1) has scored more than 30 points in each of its first three games, but the Vols are not receiving any love heading into the first week of SEC play. Florida (2-1) is coming off a narrow defeat to top-ranked Alabama and the Gators are viewed to bounce back in a big way, according to the Vegas oddsmakers.
FLORIDA STATE・19 HOURS AGO
VolunteerCountry

Tennessee blew out Tennessee Tech in their Week 3 matchup, as expected. The Vols out-gained the Golden Eagles 417 yards to 179, and Tim Banks' unit got four interceptions, making for a complete route of Tennessee Tech. While the win was a team effort that saw multiple facets of Josh Heupel's squad execute well, three individuals stood out and will be gifted game balls from VR2.
COLLEGE SPORTS・1 DAY AGO
VolunteerCountry

Tennessee was able to shutout Tennessee Tech, but injuries and various offensive struggles mean there is still work to be done before heading to Gainesville next weekend to play Florida. Watch Jack Foster and Jake Nichols deliver their post-game thoughts on Tennessee's 56-0 blowout team win against Tennessee Tech. Did...
COLLEGE SPORTS・1 DAY AGO

Jauan Jennings was drafted by the San Francisco 49ers in Round 7 of the 2020 NFL Draft. After landing on the practice squad/injured list during his rookie year, the Cowan, Tennessee native has finally recorded a catch in the NFL. And what better way to catch your first NFL pass...
NFL・20 HOURS AGO
VolunteerCountry

Tennessee (1-1) will host Tennessee Tech (0-2) for what should be a tuneup game before SEC play kicks off with a week four trip to Gainesville. While this game does not likely bring the intrigue that last week's Johnny Major's Classic did, it will still be played, but we decided to do a bold prediction for the contest instead of just our standard pick the winner piece.
TENNESSEE STATE・2 DAYS AGO
VolunteerCountry

Host Jack Foster and Jake Nichols go over the Vols' Week 3 matchup that should not be close, but will serve as a great opportunity for Tennessee to fine tune many aspects of their game heading into their first road matchup against the Gators in Week 4. Byron Young will make his Tennessee debut Saturday, what does this mean for Tennessee's pass-rush? Listen for a full preview and more on the latest edition of the VR2 on SI Podcast!
2 DAYS AGO

Joe Milton III in Street Clothes, Not Warming Up Before Start of Tennessee Tech Matchup

KNOXVILLE, Tenn. -- Last week, Tennessee quarterback Joe Milton III was injured against Pittsburgh. Josh Heupel hinted this week that Milton's health was in flux, and that appears to remain the case before kickoff against Tennessee Tech. Currently, Milton is walking around in street clothes, donning grey sweatpants and his...
KNOXVILLE, TN・2 DAYS AGO
VolunteerCountry

Nichols: In Thumping of Tennessee Tech, Josh Heupel's Vols Show Keys and Concerns That Will Be Pivotal in The Swamp

KNOXVILLE, Tenn. -- Josh Heupel must have seen a matchup he liked with Mississippi State transfer JaVonta Payton on Saturday. Virginia Tech transfer Hendon Hooker -- who started in place of the injured Joe Milton III -- tried Payton twice on the Vols' first possession against Tennessee Tech. The first pass fell through Payton's hands as he streaked down the field, while the second attempt sailed over the former Bulldog's head.
KNOXVILLE, TN・1 DAY AGO
VolunteerCountry

Tennessee is up 28-0 on Tennessee Tech at halftime, but it has not all been pretty for the Volunteers so far. Here are some key observations from the first half of play. This unit has used a couple of different combinations today, but they have not been as dominant as you would expect against Tennessee Tech. The unit has missed blocking assignments and allowed Hendon Hooker to be hit on more than one occasion. The Vols rushing attack has not tried to do anything flashy, but outside of some Hendon Hooker scrambles, they have not been able to create but a handful of explosive plays. This unit needs Cooper Mays back in a bad way as they continue to try and mesh together. Hendon Hooker still made plays against an inferior team despite the struggles from this group.
COLLEGE SPORTS・1 DAY AGO

Josh Heupel's team is banged up heading into week three of the season. The Vols will have an opportunity to clean up several things tomorrow and work plenty of depth against Tennessee Tech, but before they do, we take a look at their injury report. Cooper Mays- Mays left the...
TENNESSEE STATE・2 DAYS AGO
VolunteerCountry

Kentucky ATH Conyer Ready for Another Look at Vols

South Warren (Ky.) athlete Christian Conyer will make his second trip to Knoxville since being offered by the Vols in late April. Conyer most recently visited Tennessee in late June when the recruiting period re-opened. Since then, he has remained in contact with Tennessee's staff, and they have been consistent...
KNOXVILLE, TN・3 DAYS AGO
VolunteerCountry

Tennessee basketball has been a bright spot in UT athletics over recent years, and the 2021-2022 season shows promise to be a solid campaign. And Blue Ribbon Report agrees. Per Chris Dortch of the Blue Ribbon Report, Tennessee slides into the top ten on the list as the 10th best team. The Tennessee Basketball Twitter page released Dortch's article with the official list in the tweet below:
KNOXVILLE, TN・3 DAYS AGO
VolunteerCountry

How to Watch, Listen: Tennessee vs. Tennessee Tech

Tennessee will host its third game of the season this Saturday in Neyland Stadium in a matchup against the Tennessee Tech Golden Eagle. Tennessee will look to fine tune multiple phases of the game before SEC play kicks off in week four with a trip to Florida. Here is how...
TENNESSEE STATE・4 DAYS AGO
VolunteerCountry

After an historic 2021 season for Tennessee Baseball, expectations and excitations for this team will be higher heading into 2022 than the past several years. Following the Vols' first SEC Tournament Championship appearance since 1995 and their first Omaha appearance since 2005, Tennessee will have their fair share of rigorous SEC series to showcase their mettle once again.
BASEBALL・4 DAYS AGO
VolunteerCountry

Tennessee edge rusher Tyler Baron has been a bright spot on the defense for the Vols so far this fall, and he will look to build on that success against FCS opponent Tennessee Tech. He will have new help as Byron Young will make his debut. Baron discusses all of this and more in the video above.
TENNESSEE STATE・4 DAYS AGO
VolunteerCountry

Lane Kiffin Wants to See ‘ManningCast’ for Tennessee-Ole Miss, And Who Can Blame Him?

At SEC Media Days this summer, we asked Lane Kiffin about his return to Neyland Stadium when Tennessee faces Ole Miss on October 16th. Kiffin, of course, gave an excellent answer on Vol fans and Neyland’s environment, which you can see in the video above. But in his return, Kiffin...
KNOXVILLE, TN・3 DAYS AGO
VolunteerCountry

Byron Young's debut was one of the most anticipated of any of Tennessee's newcomers heading into 2021. The prized pass rusher passed every eye test in the preseason, performed well during camp, and looked poised to earn plenty of playing time heading into the season. But Young suffered a setback due to an NCAA technicality that caused him to be ineligible for Tennessee's first two games of the season. Now, that is behind him, and Young is generating plenty of buzz for the Vols heading into week three, and Josh Heupel had high praise for him earlier in the week.
COLLEGE SPORTS・5 DAYS AGO