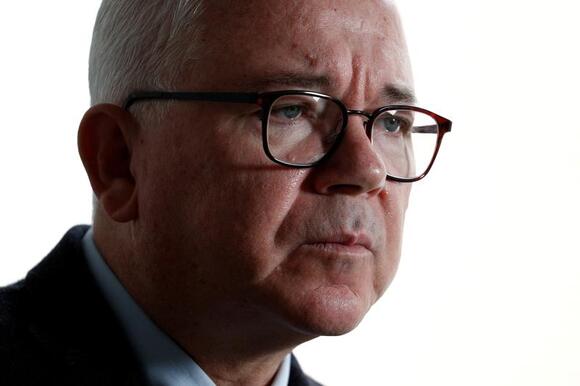 ROME (Reuters) - Italy has not yet approved a Venezuelan request for the extradition of former oil minister Rafael Ramirez, his lawyer said on Thursday, denying a Venezuelan state TV report that the move had been cleared by an appeals court.

Authorities in the South American country sought an Interpol red notice - a request to law enforcement worldwide to locate and provisionally arrest a person - for Ramirez in 2018 and requested his extradition from Italy last year in connection with embezzlement charges.

Ramirez, 57, has in the past denied corruption allegations, arguing that President Nicolas Maduro’s administration was seeking to smear him for speaking out against the government.

Ramirez’s Italian lawyer Roberto De Vita told Reuters, “The opinion of the prosecutor was in favour (of the request), but the hearing has yet to be scheduled.”

The Rome’s prosecutor office was not immediately available for comment. Italy’s justice and foreign ministries did not respond to a request for comment.

Ramirez served for a decade as oil minister and president of state oil company PDVSA, which controls some of the largest crude reserves in the world.

He was ousted from his post as Venezuela’s U.N. envoy in 2017 after publicly criticizing Maduro and the status of the OPEC nation’s oil industry. Ramirez had been a close confidant and remains an admirer of the late former president Hugo Chavez, Maduro’s predecessor and mentor.

CARACAS, Sept 9 (Reuters) - Cape Verde has committed "constitutional suicide" by allowing the extradition of businessman and envoy Alex Saab to the United States on charges of laundering money for the government of Venezuelan President Nicolas Maduro, Saab's lawyers said on Thursday. Saab was on his way to Iran...
POLITICS・6 DAYS AGO
sandiegouniontribune.com

Venezuela names US fugitive to team negotiating with foes

MIAMI — Venezuelan President Nicolas Maduro is seeking to add to a new member to his team negotiating in Mexico with his political opponents — an ally jailed in Cape Verde awaiting extradition to the U.S. on money laundering charges. Alex Saab will be incorporated into the government delegation immediately,...
U.S. POLITICS・1 DAY AGO
caribbeannationalweekly.com

Guyana will use an emergency meeting of the Caribbean Community (CARICOM) leaders to seek continued support from the 15-member regional grouping in its border dispute with Venezuela. The regional leaders were scheduled to meet on Monday to discuss the vaccination issue as they continue to implement measures aimed at containing...
AMERICAS・2 DAYS AGO
Editor at Global Perspectives

It's Complicated: Russian missiles in Venezuela?

August marked a chaotic month for the U.S., and it doesn't seem to be calming down. Moscow's Russian Defence Minister, Sergei Shoigu, signed an agreement with Venezuela's Vladimir Lopez to bring warships to one another's ports, but that's not all.
14 DAYS AGO

For two centuries, the U.S. has operated under the Monroe Doctrine — countries outside the Western Hemisphere should not interfere with independent governments in Central and South America. Yet today, we see countless actors like Russia, China and Iran meddling in Venezuela, where the economic, humanitarian and security crises provoked by Nicolás Maduro and his cronies are among the most pressing national security concerns in our part of the world.
U.S. POLITICS・13 DAYS AGO
US News and World Report

PRAIA (Reuters) -Cape Verde's highest court ruled on Tuesday that Alex Saab, a Colombian businessman who is wanted by U.S. authorities on charges of laundering money on behalf of Venezuela's government, should be extradited to the United States. Saab, who is close to Venezuelan President Nicolas Maduro, was detained in...
U.S. POLITICS・8 DAYS AGO
whbl.com

Italy to transfer its Afghanistan embassy to Qatar – minister

BRUSSELS (AP) - The European Union's competition watchdog on Friday cleared an injection of Italian government funds into new national flag carrier ITA, and said the company would not be held accountable for illegal state aid given to its predecessor Alitalia. Just a month before ITA takes to the skies,...
INDUSTRY・6 DAYS AGO

Venezuela | Protest against the extradition of a relative from Maduro. to the USA

(Caracas) The lawyers of Alex Saab, a close friend of Venezuelan President Nicolas Maduro’s accused of money laundering, condemned on Thursday the Cape Verde court decision to extradite its client to the United States on Tuesday, calling it “constitutional suicide”. Posted on Sep 9, 2021 at 3:46 pm. 49-year-old Alex...
ADVOCACY・6 DAYS AGO
wlrn.org

Venezuelans Say Most Of Guyana Is Theirs. Guyanese Call That A 'Jumbie' Story

For more than a century, Venezuela and Guyana have been arguing about where their border should be — or at least Venezuela has. Last week, that long-running territorial dispute erupted again when Venezuela’s regime — and even its political opposition — issued an unusual joint statement insisting that three-fourths of Guyana actually belongs to Venezuela.
MIAMI, FL・2 DAYS AGO
rigzone.com

The most northerly country in South America, Venezuela is also the sixth largest – roughly one-and-a-half times the size of France or Texas. It is very varied topographically, from the northernmost part of the Andes mountains in the west, via the Orinoco River, which runs across the country towards its coastal delta, to the Guiana Highlands in the east.
ENVIRONMENT・2 DAYS AGO
Reuters

CARACAS (Reuters) - Venezuela National Assembly President Jorge Rodriguez said on Tuesday that the government was proposing that Alex Saab, a government envoy currently jailed in Cabo Verde, be incorporated as a member of a dialogue process with the opposition. Saab, a Colombian businessman close to Venezuelan President Nicolas Maduro, was arrested in the African archipelago nation on U.S. charges of money laundering for the government. A Cape Verde court ruling last week paved the way for his extradition.
POLITICS・1 DAY AGO
hot96.com

CARACAS (Reuters) – Venezuela’s access to International Monetary Fund (IMF) Special Drawing Rights (SDR) will be on the agenda in talks between the opposition and the government of President Nicolas Maduro in Mexico, opposition leader Juan Guaido said on Tuesday. The IMF in August allocated around $5 billion in SDRs...
AMERICAS・1 DAY AGO
tribuneledgernews.com

The criminal investigation into the assassination of Haitian President Jovenel Moïse took a surreal turn Tuesday when Port-au-Prince’s top prosecutor asked the investigative judge to charge Prime Minister Ariel Henry in connection with the July 7 slaying. Chief Prosecutor Bedford Claude made the request in a two-page order to Judge...
IMMIGRATION・1 DAY AGO
kfgo.com

CARACAS (Reuters) – Venezuela’s National Assembly, controlled by allies of socialist President Nicolas Maduro, will not reform the OPEC country’s key hydrocarbons law this year, the president of the Assembly’s energy and oil committee said on Wednesday. Maduro said earlier this year that the Assembly would consider reforms to the...
ENERGY INDUSTRY・19 HOURS AGO
whbl.com

HAVANA (Reuters) – Haiti’s chief public prosecutor has asked the judge overseeing the investigation into the assassination of President Jovenel Moise to charge Prime Minister Ariel Henry as a suspect and ordered migration services not to let him leave the country. In a letter to Judge Garry Orelien, prosecutor Bed-Ford...
POLITICS・2 DAYS AGO
Reuters

CARACAS, Sept 14 (Reuters) - Venezuelan President Nicolas Maduro's demand for control of Colombian fertilizer producer Monomeros has further upset the company's finances and contributed to a Colombian regulator's intervention last week, said Carmen Elisa Hernandez, who resigned on Sunday as chair of the company's board. She told Reuters that...
INDUSTRY・1 DAY AGO
Reuters

CERNOBBIO, Italy (Reuters) - Italy’s economy could grow this year by more than 5.8% and post better than estimated deficit and debt ratios, Economy Minister Daniele Franco said on Sunday. Speaking at an annual business conference in Cernobbio on Lake Como, Franco added that Rome was committed to turning the...
ECONOMY・11 DAYS AGO
The Independent

Thousands of people marched in El Salvador's capital Wednesday against the government of President Nayib Bukele who protesters say has concentrated too much power, weakened the independence of the courts and may seek re-election. Some marchers are also protesting the controversial decision by Bukele to make the cryptocurrency Bitcoin legal tender in El Salvador, the first country to do so. Officials rolled out a digital wallet known as the “Chivo” one week ago, but the system has been down frequently for maintenance.The populist president elected in 2019 has maintained high popularity with his vows to stamp out corruption that...
SOCIETY・20 HOURS AGO