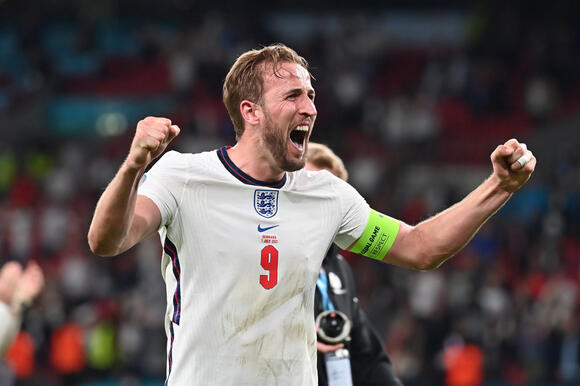 The Premier League Champions saw a bid worth £100 million rejected for the Spurs and England skipper last month, but it is widely reported that Manchester City will renew their interest in Kane in the coming weeks.

According to Eccleshare’s latest report for the Athletic this week, the Blues’ intent on signing Kane this summer means that they are “willing to pay more than £100 million” for the 27 year-old.

However, it is apparently “less clear” whether Manchester City would be willing to “go as high as £150 million” for the strikers signature.

The Athletic also report that a figure of £150 million could provide Spurs Chairman Daniel Levy with “food for thought,” despite earlier claims that Levy is “resolute in his position that the player is not for sale.”

Manchester City’s Premier League campaign kicks off against Spurs on Sunday 15th August, with the future of several players still in doubt, and rumours heavily linking England duo Harry Kane and Jack Grealish with big money moves to the Etihad this summer.

The Champions’ stance regarding a transfer for Jack Grealish is currently unclear, although The Athletic claim that City are “willing to bide their time” in regards to a potential move for Harry Kane.

They go on to report that Manchester City believe that this summer presents a very small window of opportunity to sign the striker, especially after finding out that the Premier League champions travel to North London to play Spurs on the opening weekend of the season.

Harry Kane is not expected to return to Spurs until August, though it was reported earlier this week that the 27 year-old may “reiterate his desire to leave” during this time off.

You can read the full report with analysis from the Athletic here.

The French left-back has been a sensation since his £19 million move from Real Madrid in 2019. In just 85 appearances for AC Milan, Hernandez has scored 15 goals provided 14 assists - an outstanding return for a defender. His attacking output showcases everything a typical modern-day full-back possesses and...
PREMIER LEAGUE・9 DAYS AGO
Yardbarker

Pep Guardiola's side are expected to be in the hunt for a new defensive midfielder in the next 12 months, with Fernandinho set to leave the club upon the expiry of his one-year contract extension signed earlier in the summer. However, one primary target - West Ham's Declan Rice, is...
PREMIER LEAGUE・14 DAYS AGO
goal.com

Leeds United winger will be Liverpool's next purchase after a five-year scouting mission, mulls The Mirror. Jurgen Klopp''s side tangled with the Brazilian this weekend as the Reds faced the Whites. But soon, the wide man could swap one side of England for another and play his trade at Anfield...
PREMIER LEAGUE・9 DAYS AGO
The Guardian

It feels like an age since Manchester City played Chelsea in the Champions League final in Porto. Kai Havertz’s goal three minutes before the break was enough to give Chelsea a 1-0 victory and make them European champions for the second time. That game at the end of May was also the last time John Stones turned out for Manchester City.
PREMIER LEAGUE・6 DAYS AGO

Manchester United have made Declan Rice their No.1 transfer target, but could face competition from Manchester City for the West Ham hero. United were keen to make a deal for the 22 year-old midfielder in the summer window. West Ham slapped a price of £100million on the England international, and...
PREMIER LEAGUE・3 DAYS AGO
The Independent

Mark Noble came off the bench only to miss a stoppage-time penalty as Manchester United snatched a dramatic 2-1 victory at the London Stadium.Club captain Noble, West Ham’s Mr Reliable from the spot, was sent on by manager David Moyes to take the penalty after Luke Shaw handled in the area.The long-serving midfielder, who retires at the end of the season, had not missed a spot-kick since December 2016, but he was denied a sentimental winner by United goalkeeper David De Gea.It was a hugely dramatic end to a thrilling match which saw Jesse Lingard return to haunt the club...
PREMIER LEAGUE・2 DAYS AGO
The Independent

Tottenham vs Chelsea live stream: How to watch Premier League fixture online and on TV today

Chelsea will look to continue their unbeaten start to the Premier League season against a Tottenham Hotspur side aiming to bounce back from a heavy loss at Crystal Palace last weekend. Romelu Lukaku scored with each of his two shots on target as a clinical Chelsea team dispatched Aston Villa 3-0 at Stamford Bridge last weekend to move to 10 points in the Premier League. The Belgian striker was then on target again as the Blues won their opening match of the Champions League against Zenit St Petersburg on Tuesday, and the 28-year-old has now scored four times in as...
PREMIER LEAGUE・2 DAYS AGO
Insider

Ronaldo and Messi completed 2 of soccer's biggest ever transfers this summer. Their fortunes couldn't have been more different since then.
SOCCER・1 DAY AGO

Manchester United, Liverpool and Chelsea are reportedly among the clubs to have been in ‘regular contact’ with Borussia Dortmund over a potential future transfer deal for wonderkid Jude Bellingham. The 18-year-old is widely considered to be one of the most exciting young talents in Europe at the moment, having shone...
PREMIER LEAGUE・12 DAYS AGO
The US Sun

CHELSEA are interested in a swap deal involving Timo Werner and Leroy Sane ahead of next summer. That is according to Todos Fichajes, who report that the Blues are targeting Sane and are willing to let Werner go the other way to Bayern Munich. The striker has been among Bayern's...
PREMIER LEAGUE・10 DAYS AGO
The US Sun

MANCHESTER UNITED are interested in signing West Ham star Declan Rice, according to reports. It's believed Ole Gunnar Solskjaer's side have identified the England midfielder as their first-choice midfield target. According to the Manchester Evening News, Man Utd will try to purchase Rice, 22, during next summer's transfer window. The...
PREMIER LEAGUE・12 DAYS AGO
The US Sun

MAN UTD have gone top of the Premier League after a spectacular debut from Cristiano Ronaldo. CR7 netted twice in a 4-1 win over Newcastle, sending Old Trafford wild. The Red Devils are also looking towards next summer's transfer window, where they're set to go back in for West Ham's Declan Rice.
PREMIER LEAGUE・8 DAYS AGO

The Premier League champions completed the signing of the 26-year-old for a British-record fee of £100 million, surpassing the £89.3 million spent by Manchester United to sign Paul Pogba from Juventus in 2016. Grealish has made a fine start to life at the Etihad Stadium, grabbing a goal and an...
PREMIER LEAGUE・8 DAYS AGO
Tribal Football

West Ham midfielder Declan Rice may be priced out of a dream move to Chelsea or Manchester United in the summer. Rice has seen his stock rise in the past two years through his performances at club and international level. The 22-year-old has three years remaining on his contract, and...
PREMIER LEAGUE・7 DAYS AGO
MLive

The best player in the world returns home on Saturday. Cristiano Ronaldo, after 12 years, is returning to the team he had his big break with, Manchester United FC. He is expected to be in the lineup when the Red Devils get set to take on Newcastle United on Saturday.
PREMIER LEAGUE・10 DAYS AGO
The Independent

Tottenham, England and West Ham greats Alan Mullery and Sir Geoff Hurst have hailed “the best goalscorer to ever play” and “terrific guy” Jimmy Greaves as tributes poured in following the death of the former Spurs striker.Greaves, who died at home on Sunday morning aged 81, suffered a stroke in May 2015 which had left him wheelchair-bound and with severely impaired speech. He had struggled with alcoholism and quit drinking in 1978.His former Spurs team-mate Mullery told Sky Sports: “I am at Brighton, looking at the pitch and can picture Jimmy on the field, side-footing the ball past the keeper....
PREMIER LEAGUE・2 DAYS AGO
The Independent

Is West Ham vs Manchester United on TV today? Kick-off time, channel and how to watch Premier League fixture

Manchester United will look to put the disappointment of their opening Champions League defeat behind them as they visit West Ham.Ole Gunnar Solskjaer’s side were stunned by Young Boys in Bern as their European campaign got off to a poor start.Aaron Wan-Bissaka was sent off in the first half of that encounter but will be available as Manchester United bid to continue their unbeaten league start.Follow West Ham vs Manchester United LIVEWest Ham, also yet to be beaten in the Premier League, will be missing Michail Antonio after the striker was sent off at Southampton.Here’s all the information you need...
PREMIER LEAGUE・2 DAYS AGO
The Guardian

Kaide Gordon is in contention to make his Liverpool debut on Tuesday, with the assistant manager Pepijn Lijnders describing the 16-year-old as one of “many diamonds” on the pathway to the first team. The teenage winger has made a major impression since joining Liverpool from Derby in February and has...
PREMIER LEAGUE・1 DAY AGO
The Independent

Leon Bailey admitted he injured himself while scoring during his match-winning cameo for Aston Villa The forward was on the pitch for just 21 minutes but grabbed a goal and an assist as Villa scored three times in nine minutes to beat Everton 3-0.Bailey netted his first goal since his £25million summer move from Bayer Leverkusen but was forced off soon after on Saturday.“The injury was actually from the shot – I think I hit it too hard so I started feeling a little stiff in my quad. But I don’t think it should be anything serious,” he told the...
PREMIER LEAGUE・2 DAYS AGO
The Independent

Daniel Farke insists he will not “bury his players alive” as Norwich look to get their season on track with victory over Liverpool in the Carabao Cup.The Canaries have lost their opening five Premier League games of the campaign and sit rock bottom of the table.Conversely, Liverpool visit Carrow Road for their third-round tie sitting joint-top having beaten Crystal Palace on Saturday.Norwich had a tough start to life back in the top flight, losing to the Reds, Manchester City, Leicester and Arsenal in their first four games.Defeat at home to newly-promoted Watford last time out was a more difficult pill...
PREMIER LEAGUE・1 DAY AGO