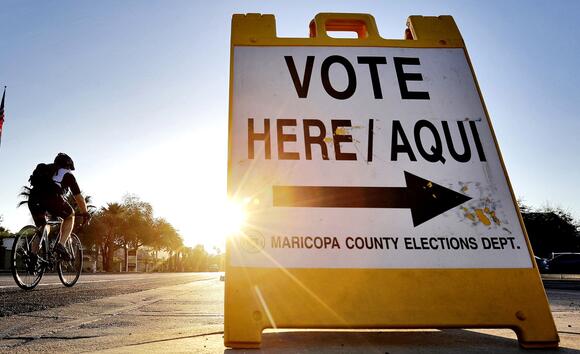 In the case, Brnovich v. Democratic National Committee , the court’s conservatives ruled that the state’s ballot harvesting ban, as well as its requirement that Election Day ballots be cast in a voter’s home precinct, was not intended to be racially discriminatory. The court’s liberals disagreed sharply, claiming the laws had a disparate effect on minority communities and violated federal law.

The decision similarly polarized elected Democrats and Republicans. For instance, Arizona Attorney General Mark Brnovich said he was pleased with the win because it set a precedent for ensuring election integrity in future disputes.

“We have to maintain confidence in the process and of the integrity of the results,” Brnovich told the Washington Examiner , commending Justice Samuel Alito for his strong endorsement of the laws in his majority opinion.

Many Democrats took the opposite position. President Joe Biden condemned the decision in a statement, calling it an attack on the “beating heart of our democracy.” Biden also called out the court’s conservatives during a Tuesday speech, in which he also spoke against a raft of Republican-led state election laws drawn up after the 2020 presidential election.

Biden listed the Supreme Court’s decision as one of many attacks on the country, lumping it with 2020 election challenges and the Jan. 6 riot inside the Capitol. Biden urged Congress to fight against the court’s decision, saying the case demanded a legislative response.

“It puts the burden on Congress to restore the Voting Rights Act to its intended strength,” Biden said, adding he would sign such legislation into law.

Many Democrats in Congress have already incorporated the results of the case, which addressed Section 2 of the 1965 Voting Rights Act, into legislation to push back against stricter state election laws.

Nadler said that after Brnovich , he would update his bill. House Democrats on Friday will hold a hearing to discuss what rewrites might look like.

Vermont Sen. Patrick Leahy, who wrote the Senate version of the same bill, said he would reintroduce the act with similar updates. The Senate will hold comparable hearings on Wednesday. Neither Nadler nor Leahy responded to requests for comment.

There are a number of ways Democrats could try to override the Supreme Court’s decision, said Nicholas Stephanopoulos, a law professor at Harvard University. That could mean disregarding some of the factors Alito put into his opinion while codifying the factors Justice Elena Kagan stressed in her dissent.

Chief among these, he said, are Kagan’s contentions that voting laws should take into account whether they produce disparate results for different minority groups and whether the laws are necessary to further an important state interest.

Kagan, whose dissent earned much praise from Democrats at all levels of government, took direct aim at Alito and the other court conservatives. Comparing the majority’s decision to the infamous Dred Scott v. Sandford case, she said the court was systematically stripping minorities’ right to vote.

The likelihood of any legislation landing on Biden's desk is slim because Republicans have united in opposition to both the John Lewis Act and the For the People Act, a Democratic bill aimed at sweeping electoral reforms.

Senate Minority Leader Mitch McConnell dismissed the push as "an assault on the fundamental idea that states, not the federal government, should decide how to run their own elections."

Why must the democrats consistently treat minorities like autistic children? People can get drivers licenses without help; people can get library cards without Congress’ help. The internet is available anyplace McDonalds exists , and so everywhere in the country, etc. it’s racism to insist that minorities are a o incapable of doing the ordinary things everyone else can do without proof, unless they are claiming all minorities suffer diminished mental capacity.

democrates are a threat to our cival rights. . when they don't win their terrist agenda to destroy America freedoms. they run away and neglect their duties. vote all Democrates out of office.

Democrats' displeasure with the court comes after a series of high-profile decisions have come down against President Biden and liberal interests.
TEXAS STATE・13 HOURS AGO
CBS News

Washington — House Speaker Nancy Pelosi told her Democratic colleagues on Monday that they should brace for "adjustments" to the $3.5 trillion social spending package to fit the Senate's constraints for the budget process lawmakers are using to fast-track the legislation through Congress. Democratic-led House committees completed work last week...
CONGRESS & COURTS・1 DAY AGO
Newsweek

The Keeping Renters Safe Act of 2021 would give the Department of Health and Human Services power to impose an eviction ban in the interest of public health.
CONGRESS & COURTS・1 DAY AGO
Business Insider

And the House passed a bill meant to avert a government shutdown and avoid a debt default.
CONGRESS & COURTS・17 HOURS AGO

It is a central principle of law: Courts are supposed to follow earlier decisions – precedent – to resolve current disputes. But it’s inevitable that sometimes, the precedent has to go, and a court has to overrule another court, or even its own decision from an earlier case. In its...
CONGRESS & COURTS・2 DAYS AGO
Reuters

WASHINGTON, Sept 20 (Reuters) - Top Democrats in the U.S. Congress on Monday said they would aim to continue funding the government and increase its borrowing authority in a single bill in coming days, setting up a showdown with Republicans who have vowed not to approve more debt. House of...
CONGRESS & COURTS・2 DAYS AGO
NBC News

If Supreme Court justices don’t want to be seen as “partisan hacks,” they should not act like them. …. [Justice Amy Coney] Barrett’s protest against the justices being seen as “partisan hacks” rings hollow when that is what they have become. And it is risible to say that “judicial philosophies are not the same as political parties.” I would challenge her to give a single instance where the conservative justices on the court took positions that were at odds with the views of the Republican Party. …
LOS ANGELES, CA・2 DAYS AGO

Democrats can’t use their $3.5 trillion package bolstering social and climate programs for their plan to give millions of immigrants a chance to become citizens, the Senate’s parliamentarian said, a crushing blow to what was the party’s clearest pathway in years to attaining that long-sought goal.The decision by Elizabeth MacDonough, the Senate’s nonpartisan interpreter of its often enigmatic rules, is a damaging and disheartening setback for President Joe Biden congressional Democrats and their allies in the pro-immigration and progressive communities. Though they said they’d offer her fresh alternatives, MacDonough’s stance badly wounds their hopes of unilaterally enacting —...
CONGRESS & COURTS・2 DAYS AGO
Pennsylvania Capital-Star

The opinion by Elizabeth MacDonough, the Senate’s nonpartisan parliamentarian, was a setback for the Biden administration and Democrats who would have to reach 60 votes in the Senate for any immigration reform, rather than a simple majority through reconciliation, a process reserved for matters that affect spending, revenues, the deficit or the debt limit. The Senate is evenly split between the parties. The post Immigration reform blocked from reconciliation bill in Congress, but Democrats vow to try again appeared first on Pennsylvania Capital-Star.
FOREIGN POLICY・2 DAYS AGO
CBS San Francisco

SAN FRANCISCO (KPIX) — The U.S. Supreme Court has announced it will hear arguments over a law that serve as a step towards overturning the landmark Roe v. Wade decision establishing a women’s right to abortion. The arguments in early December will center around a Mississippi law that bans abortions after 15 weeks. Some say it’s an early signal the Supreme Court could eventually overturn Roe v. Wade, triggering reactions from both sides. “Our constitutional protections as we’ve enjoyed them are at a real threat, like never before,” said Jodi Hicks of Planned Parenthood Affiliates of California. The 1973 Roe v Wade ruling declared...
SAN FRANCISCO, CA・2 DAYS AGO
POLITICO

The party's push for immigration in its social spending bill suffered a setback, but that might not be the only major provision to get chopped.
CONGRESS & COURTS・2 DAYS AGO

If Supreme Court justices don’t want to be seen as “partisan hacks,” they should not act like them. In a speech last week at the McConnell Center at the University of Louisville Law School, Justice Amy Coney Barrett said, “This court is not comprised of a bunch of partisan hacks.” She added, “Judicial philosophies are not the same as political parties.”
CONGRESS & COURTS・2 DAYS AGO
WashingtonExaminer

Democrats planned to pass a massive social spending bill along with a major infrastructure package, government funding, and a debt ceiling increase — all by the end of September.
CONGRESS & COURTS・2 DAYS AGO
Vanity Fair

Supreme Court Justice Clarence Thomas, arguably the bench’s most conservative member, bemoaned the politicization of judges and warned against the highest court becoming “the most dangerous” branch of government during a Thursday speech at the University of Notre Dame. “I think the media makes it sound as though you are just always going right to your personal preference. So if they think you are antiabortion or something personally, they think that’s the way you always will come out,” said the George H. W. Bush–appointed justice, per a Washington Post report. “They think you’re for this or for that. They think you become like a politician. That’s a problem. You’re going to jeopardize any faith in the legal institutions.”
TEXAS STATE・5 DAYS AGO
Washington Post

The Senate knew about Kavanaugh’s partisan history. It confirmed him anyway.

Nearly three years after his confirmation, Justice Brett Kavanaugh remains a deeply divisive figure, the best-known but least-popular justice on the Supreme Court. Occasionally, his votes or some news story will renew the bitter sense among many Americans that he got away with a lie in denying Christine Blasey Ford’s and Debbie Ramirez’s allegations of sexual misconduct, as well as a third such accusation, from his Yale years, that Senate Republicans all but bottled up.
CONGRESS & COURTS・6 DAYS AGO

SACRAMENTO — A California Supreme Court justice said Thursday that he will leave after next month to head an international think tank, giving Democratic Gov. Gavin Newsom his second appointment to the high court. Justice Mariano-Florentino Cuéllar will become the new president of the Carnegie Endowment for International Peace after...
SACRAMENTO, CA・5 DAYS AGO
Business Insider

Just 37% of Americans approve of the Supreme Court, an all-time low for the judicial body: poll

Jerry Springer slammed the Conservative judges on the Supreme Court, calling them ‘secretive’, ‘gutless’ and ’disrespectful’ of women, after they refused to stay or overturn Texas’s new 6-week abortion ban. Jerry Springer didn’t mince words when sharing his thoughts on The Supreme Court’s inaction in intervening with the new Texas...
TEXAS STATE・8 DAYS AGO
kawc.org

PHOENIX -- The Arizona Senate has no legal excuse to refuse to publicly produce the records of the firm it hired to audit the 2020 election returns. In a brief order Tuesday, the Arizona Supreme Court refused to overturn a Court of Appeals ruling that the records of Cyber Ninjas as related to the audit are public.
MARICOPA COUNTY, AZ・7 DAYS AGO