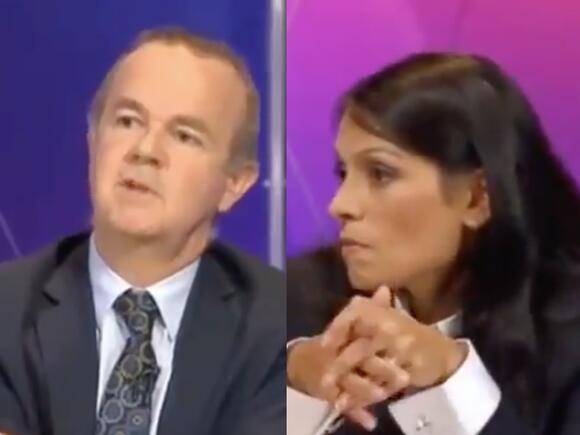 Priti Patel has had a very eventful tenure as Home Secretary so far.

In the latest controversy, the minister has found herself embroiled in a row surrounding the racist abuse of England players on social media following the team's loss to Italy in the Euro 2020 final.

Patel publicly condemned the abuse in the aftermath of the match, but she was later called out – most notably by England defender Tyrone Mings – for previously failing to criticise those who booed the players for taking the knee before kick-off at each match at the Euros.

Now a 2011 clip of her talking about capital punishment has resurfaced online.

In the clip, from BBC's Question Time, guest and Private Eye editor Ian Hislop took apart Patel’s argument in favour of the death penalty, saying the inaccuracy of sentencing in the UK would mean innocent people would be killed by the state.

He began telling a studio audience: “For 50 years Private Eye has pretty much, in most issues, exposed a miscarriage of justice and a lot of them have been murders... Over the years, large numbers of these cases have been found to be entirely wrong. And the men convicted – and a couple of women – have been found innocent.”

Hislop added: “We would have killed those people, and in some of those very high profile cases which involve terrorism cases, we would have made very dangerous new martyrs by executing people who turned out not to have committed the murders involved. So on a purely practical basis, I think it would be incredibly dangerous to have capital punishment back.”

In response, Patel argued capital punishment can act as a “deterrent” to serious crime. She said: “This is really about our criminal justice system actually, and if any conviction, for example, you need ultimate burden of proof.”

But the point Hislop was trying to make is that in some cases, there are mistakes. Hislop interjected: “Are you saying they were guilty? All these people?”

“No I’m not saying they were guilty, obviously,” Patel hastened to add.

“So they would be dead?” Hislop suggested if there was capital punishment.

“The point is,” Patel steamrolled ahead, “it’s about having deterrents. If you have strong deterrents – “

At this point, Hislop once more interrupted with a great point. "It’s not a deterrent killing the wrong people."

Hislop’s scathing takedown of the politician has gone viral all over again, amid the latest row.

According to Amnesty International, a global human rights organisation, “scientists agree, by an overwhelming majority, that the death penalty has no deterrent effect”.

It's also worth noting that Patel has since clarified that she has never been an "active supporter" of the death penalty and says that previous clips of her have been taking "out of context".

Back to the football, and Patel has been defended by her fellow Tory MPs. Speaking to Sky News on Wednesday Grant Shapps said: “I thought the comments about Priti Patel were unusual, were odd because she has spoken very movingly in the House of Commons about her own experiences and suffering from racism.”

On Tuesday, Steve Barclay insisted that Patel was “committed to tackling racism”. However, his colleague Johnny Mercer claimed that Mings’ comments about the home secretary were “completely right.”

The sheer scale of the devastation of the earthquake and its aftershocks can be seen in social media photos and videos posted by people in Turkey and Syria. Eyewitnesses have also been speaking about what happened. BBC News has been pulling together and verifying information. The tremors of the main...
1 DAY AGO
Indy100

A Tory minister was asked whether barristers or nurses are more important today and it went badly.Speaking to LBC's Nick Ferrari, Maria Caulfield was asked why the government had offered nurses a 4 per cent pay rise, but had made a 15 per cent deal with barristers amid a fresh round of strikes.Caulfield said barristers hadn't had a pay rise "for a number of years" while nurses got a 3 per cent pay rise last year.Ferrari said the 15 per cent figure was still "a surprise" and asked: "Who is more important in life do you imagine a barrister or...
1 DAY AGO
Indy100

2023 has barely begun but the Tory government is already doing the most to mess it up.While their intentions are doubtless good, over the last few weeks we've seen silly policy suggestions, strikes, no sign of the cost of living crisis abating and behaviour from MPs that is enough to make you gasp.It's not ideal, to put it mildly, but the onslaught of bad news may soon turn voters off the party - even if they are rumoured to get tax breaks (more on that later).Sign up to our free Indy100 weekly newsletterSo - if you can stomach it -...
2 DAYS AGO
Indy100

A Tory MP has told people to delete TikTok from their phones to protect their personal data from “hostile” threats.Alicia Kearns issued her warning after a suspected Chinese spy balloon was shot down over US airspace, and said users should “without question” get rid of the app, suggesting it is linked to China's efforts to build a “tech totalitarian state”.She told Sky’s Sophy Ridge On Sunday programme: “What we’ve now seen is that people working in China for TikTok hacked into European data so it could track down the source of a journalist", “Because what TikTok does is it gives...
1 DAY AGO
Indy100

Liz Truss was asked about sacking Kwasi Kwarteng when she was (briefly) prime minister and it didn't go down well.The former prime minister just had an interview with the Spectator - her first interview since dramatically losing office.Asked how "difficult" it was for her to sack her then chancellor, something she did to try and get the economy back on track just days before she herself ended up resigning, Truss said the decision "was very difficult" and added that reversing aspects of the mini-budget she agreed with was also tough.She was then asked if the two disagreed on anything, to...
21 HOURS AGO
Indy100

Not content with being the UK’s shortest-serving prime minister after just 45 days in office, Liz Truss now seems to be going after Matt Hancock’s title as the Tory MP most desperate for a political comeback.After lying low for a little while after her disastrous mini-budget brought an end to her tenure back in October, the South West Norfolk MP has penned a 4,000-word article for The Telegraph looking to shed light on where it all went wrong.We read it, so you don’t have to.In the essay’s opening paragraphs, Ms Truss reveals she has spent “many hours reflecting on what...
2 DAYS AGO
Indy100

One of Dominic Raab's colleagues has confirmed he had “a disagreement” with the "robust" politician when they were both in the cabinet.An unnamed ally of Robert Buckland reportedly told the Times that after Buckland criticised Raab's plan for a British bill of rights, Raab had a “very odd, very punchy” reaction.Another source told the paper Buckland told prime minister Rishi Sunak about the incident, which reportedly took place in August during the final weeks of Boris Johnson’s government.Questioned on LBC on Monday morning about the report, Buckland did not deny that Raab had told him he would have to be...
1 DAY AGO
Indy100

Nick Ferrari has been criticised for saying that parents who cannot afford to buy their children a toothbrush should not have children.The broadcaster, made the comments during his weekday radio breakfast show on LBC in response to new research that revealed four out of five teachers in the UK have given oral hygiene products to students.“If you are a mum and, or a dad, and you haven’t got money to buy your child a toothbrush, you should never have become a parent in the first place," Ferrari said on Monday, February 6.Sign up to our free Indy100 weekly newsletter However,...
16 HOURS AGO
Indy100

Pakistani education activist, youngest Nobel Peace Prize award recipient and hero Malala Yousafzai has given the internet a taste of her very relatable married life with Asser Malik, a Pakistan Cricket Board manager.Taking to Twitter over the weekend (4 February), Yousafzai revealed she threw her husband's dirty socks in the "rubbish bin" – and people couldn't help but praise the drastic move."Found socks on sofa, asked @MalikAsser if they were his, he said the socks were dirty, and I can put them away. So I took them and put them in the (rubbish) bin," she wrote.Sign up to our new...
1 DAY AGO