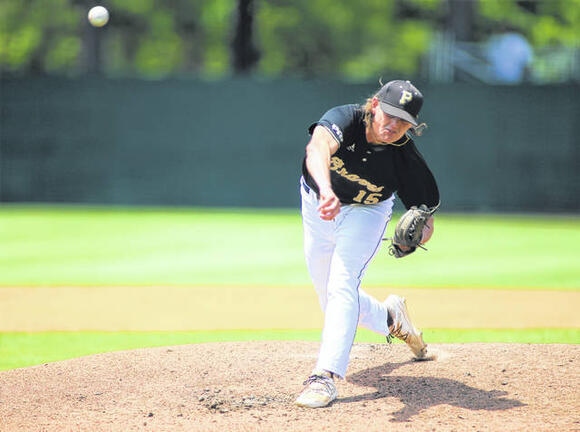 UNCP Athletics UNC Pembroke’s River Ryan throws a pitch during a Peach Belt Conference semifinal series game against Columbus State on May 9. Ryan was drafted Tuesday by the San Diego Padres in the 11th round of the MLB Draft.

PEMBROKE — Every kid who grows up playing baseball hopes to one day hear their name called in the MLB Draft.

For The University of North Carolina at Pembroke’s River Ryan, that moment came Tuesday.

Ryan was selected in the 11th round by the San Diego Padres, becoming the first UNCP player drafted in seven years and the 14th overall.

The 6-foot-2, 195-pound Ryan played pitcher and second base for UNCP, being used as both a starter and closer on the mound and producing as a key piece in the middle of the Braves order this spring. He was selected by the Padres as a pitcher.

Ryan was 5-1 with six saves and a 3.66 ERA in 2021, striking out 68 batters in 51 2/3 innings pitched. He started the season without allowing a run over his first 10 appearances, over a span of 18 2/3 innings; he moved from the closer’s role to the starting rotation in the season’s stretch run to pitch more innings as the Braves chased, and ultimately won, their first regular-season conference title in program history.

The last UNCP player taken in the MLB Draft was Jordan Edgerton, who was drafted as a third baseman by the Atlanta Braves in the ninth round in 2014 and played three seasons in the Braves’ minor-league system, reaching high-A ball. Edgerton was the first UNCP draft selection since Torrey Pettiford, a second baseman who went to the Philadelphia Phillies in 1994.

PEMBROKE — For the third time this season, the Purnell Swett football team is in quarantine after a positive test for COVID-19.
FOOTBALL・3 DAYS AGO
The Robesonian

VALDOSTA, Ga. — The UNC Pembroke volleyball team had its midweek momentum quelled on Friday afternoon on at the Valdosta State Invitatio
VALDOSTA, GA・7 DAYS AGO
The Robesonian

LUMBERTON — It was a “struggle” for Brian Haymore Sunday at the Robeson County Golf Championship. But despite a r
ROBESON COUNTY, NC・6 DAYS AGO
The Robesonian

LUMBERTON — After winning the Robeson County Golf Championship in 2016, Steve Pippin quit golf in 2018. A year later, he ret
ROBESON COUNTY, NC・6 DAYS AGO
The Robesonian

LUMBERTON — As players finished their second rounds at the Robeson County Golf Championship, those posting overall scores around even pa
ROBESON COUNTY, NC・7 DAYS AGO

PEMBROKE – The UNC Pembroke football team will make the 615-mile trip to northwest Ohio on Saturday when the Braves take their show on t
PEMBROKE, NC・8 DAYS AGO
The Robesonian

LUMBERTON — Ryan Bass said before the Robeson County Golf Championship his game plan was simply to limit bogeys and make as many birdies
ROBESON COUNTY, NC・8 DAYS AGO