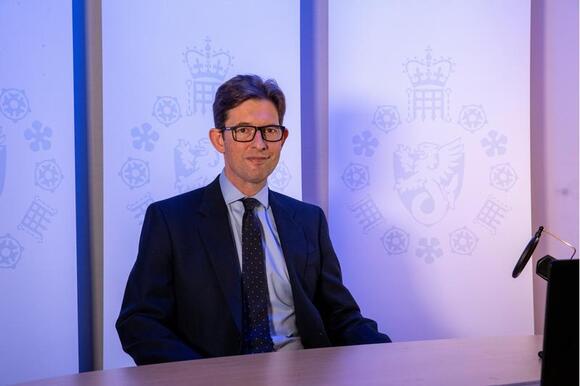 LONDON (Reuters) - Britain’s top domestic spymaster cautioned the population on Wednesday to treat the threat of spying from Russia and China as vigilantly as terrorism, warning that foreign spies were seeking to pilfer technology, sow discord and attack infrastructure.

The 9/11 attacks on the United States almost 20 years ago made tackling terrorism the biggest priority for Western intelligence agencies, with vast resources focused on the threat from home-grown and foreign-based militants.

But the growing assertiveness of Russia and China has turned some attention of the West’s most powerful spymasters back to old-fashioned counter intelligence, or spies tracking other spies a constant cat-and-mouse game.

The consequences of spying by foreign powers can range “from frustration and inconvenience, through loss of livelihood, potentially up to loss of life,” McCallum will say in a speech at MI5 headquarters Thames House.

“We must, over time, build the same public awareness and resilience to state threats that we have done over the years on terrorism,” he said in excerpts of his speech released by MI5.

British spies say China and Russia have independently sought to steal commercially sensitive data and intellectual property as well as to interfere in politics and sow misinformation.

Beijing and Moscow say the West is gripped with a paranoia about plots. Both Russia and Chine deny they meddle abroad, seek to steal technology, carry out cyberattacks or sow discord.

McCallum, a career spy, said the whole country should be alert to the threat of foreign spying.

“We see the UK’s brilliant universities and researchers having their discoveries stolen or copied; we see businesses hollowed out by the loss of advantage they’ve worked painstakingly to build,” he said.

“Given half a chance, hostile actors will short-circuit years of patient British research or investment. This is happening at scale. And it affects us all. UK jobs, UK public services, UK futures.”

MI5 began as a counter-intelligence service 1909, first focusing on the threat from Germany and then, after World War Two, focusing on the Cold War threat posed by the Soviet Union’s agents.

US spy planes have been deployed to Russian and Taiwan as Vladimir Putin and Xi Jinping’s forces stage war games. The RC-135 aircraft have monitoring massive missile firing drills in the Black Sea and a sizable Chinese air force incursion into Taiwan’s airspace. Russia's navy practised firing at targets in...
AEROSPACE & DEFENSE・4 DAYS AGO
The Associated Press

Russia says it’s in sync with US, China, Pakistan on Taliban

Column: A new military alliance, a summit meeting: The U.S.-China face-off is looking like the Cold War

The Biden administration is building a Cold War-style web of alliances to contain China. Will China strike back?
LOS ANGELES, CA・2 DAYS AGO
The US Sun

A RUSSIAN spy ship that can allegedly cut undersea cables was today spotted in the English Channel. Vladimir Putin's Yantar was caught loitering between the coast of Devon and France and appears to be heading north. Trackers noticed the vessel, armed with state-of-the-art stealth subs, on website Marine Traffic. It...
EUROPE・14 DAYS AGO

LONDON (Reuters) – Britain’s Brexit minister David Frost on Monday said that the European Union must move in negotiations over the trading arrangements in Northern Ireland or Britain may unilaterally suspend the so-called “protocol”. Under the protocol, Britain agreed to leave some EU rules in place in Northern Ireland and...
ECONOMY・14 DAYS AGO
104.1 WIKY

LONDON (Reuters) – Britain’s relationship with France is rock solid, Prime Minister Boris Johnson said on Thursday, when asked about a new defence pact with Australia and the United States that sinks an existing French-Australian submarine deal. France has reacted angrily to Wednesday’s news of the ‘AUKUS’ partnership that will...
POLITICS・12 DAYS AGO
International Business Times

The new Chinese ambassador to the United Kingdom, Zheng Zeguang, has been barred from the UK Houses of Parliament, in a move believed to be retaliation for the Chinese government’s sanctions on British MPs. Zheng was supposed to attend a meeting of the pro-Chinese all-party group on China but House...
U.S. POLITICS・13 DAYS AGO
Reuters

Britain says it will do whatever necessary to counter Russian threat

LONDON, Sept 21 (Reuters) - Britain will take steps to counter the threat from Russia and will try to detain the Russian military intelligence (GRU) operatives behind a 2018 nerve attack if they ever set foot outside Russia, Britain’s interior minister said on Tuesday. “The government will continue to respond...
U.K.・6 DAYS AGO

U.K. prosecutors said they had enough evidence to charge Denis Sergeev, a member of the Russian military intelligence service, in the 2018 Salisbury nerve agent attack against a former Russian spy, according to AP. Why it matters: Sergeev is the third person to face charges for the nerve agent attack...
PUBLIC SAFETY・7 DAYS AGO
audacy.com

LONDON (AP) — British police said Tuesday they are charging a third Russian suspect, a member of the country's military intelligence service, in the 2018 nerve agent attack on a former Russian spy in England. Prosecutors believe there is sufficient evidence to charge Denis Sergeev, who went by the alias...
PUBLIC SAFETY・7 DAYS AGO
The Independent

A Russian spy chief has accused Britain of using the Novichok attack to deflect from the UK’s shambolic withdrawal from Afghanistan.On Tuesday, a third Russian – Denis Sergeev, also known as Sergey Fedotov – was charged in absentia with the 2018 attack that led to the death of a woman called Dawn Sturgess, who unknowingly put the nerve agent novichok on her skin.In 2018, two other Russians – Alexander Mishkin, alias Alexander Petrov, and Anatoliy Chepiga, alias Ruslan Boshirov – were charged with conspiracy to murder double agent Sergei Skripal, his daughter Yulia, and a British police officer in Salisbury.Britain...
PUBLIC SAFETY・4 DAYS AGO
whbl.com

MOSCOW (Reuters) – A Russian spy chief on Thursday accused Britain of lies and trying to divert attention from other issues after British police said a third Russian suspect had been identified in the 2018 Novichok murder attempt on a former double agent. The attack on Sergei Skripal, who sold...
PUBLIC SAFETY・4 DAYS AGO
POLITICO

Huawei's Meng returns to China after striking deal with U.S.

The Canadians jailed in retaliation for her 2018 arrest have been freed by China to return to Canada.
FOREIGN POLICY・3 DAYS AGO
TechCrunch

EU warns Russia over ‘Ghostwriter’ hacking ahead of German elections

The “Ghostwriter” campaign targeted “numerous members of Parliaments, government officials, politicians, and members of the press and civil society in the EU”, according to a press release from the European Council on Friday, and was carried out “by accessing computer systems and personal accounts and stealing data.”. The statement by...
EUROPE・3 DAYS AGO
districtchronicles.com

China must make first nuclear strike against US if Biden defends Taiwan, says China diplomat in chilling message to West

CHINA must make the first nuclear strike against the US if Biden defends Taiwan, a Chinese diplomat said in a chilling message to the West. China’s former ambassador to the UN, Sha Zukang said the country’s long-standing promise to only use nukes in retaliation should be re-examined in response to the new alliances forming in the area.
FOREIGN POLICY・3 DAYS AGO
Reuters

CAMBRIDGE, England (Reuters) -Britain’s Channel 4 will be able to access more money to compete with streaming giants Amazon and Netflix if it comes under private ownership, a minister said on Wednesday. Britain's government said in June here it was planning to sell the publicly owned but commercially funded broadcaster,...
BUSINESS・13 DAYS AGO
dallassun.com

What Russia's the most powerful assault rifle is capable of

The weapon penetrates solid walls and even the slightest hit of its ammo is lethal for any enemy. Our correspondent tries it himself and shares his feeling with us. Back in 2001 Russian FSB forces ordered a new assault rifle that would be able to effectively penetrate solid walls as well as toughest body armour plates. The need for a new weapon was revealed after a terrorist attack on a school in Beslan with the imprisonment of more than 1,100 people as hostages (including 777 children)
MILITARY・12 DAYS AGO
AFP

Chad's foreign minister warned against outside interference on Thursday, referencing Russian paramilitaries operating in neighboring countries. Cherif Mahamat Zene said "external interference, wherever it comes from, poses a very serious problem for the stability and security of my country," when asked about Russia's Wagner Group. He told AFP and Africa Confidential on the sidelines of the UN General Assembly in New York that every measure would be taken "to ensure" Chad is protected. "There are Russian mercenaries present in Libya, who are also present in the Central African Republic," he said.
WORLD・4 DAYS AGO
Axios

Russia has asked Israel to encourage the U.S. to agree to hold high-level trilateral talks on Syria, two senior Israeli officials tell me. Why it matters: Israel's main focus in Syria is getting Iran out, and that would likely only be possible through U.S.-Russian cooperation. Flashback: The U.S., Russian and...
FOREIGN POLICY・5 DAYS AGO
The Guardian

Canada, China and US were all doomed to lose in Meng Wanzhou’s case

The deal allowing Meng Wanzhou to return home to China nearly three years after her arrest will come as a relief to all the participants in a saga that rapidly turned from a narrow legal dispute into an escalating geopolitical battle. After the Huawei finance chief was detained on a...
FOREIGN POLICY・3 DAYS AGO