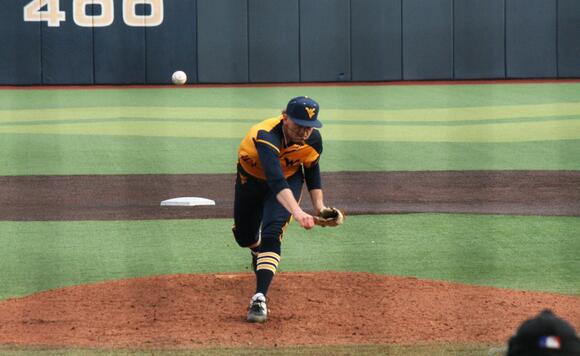 Junior right-handed pitcher Madison Jeffrey became the third Mountaineer to be drafted in the 2021 MLB First-Year Player Draft. Tuesday afternoon, Jeffrey was selected in the 15th round (462nd overall) by the Los Angeles Dodgers.

During his first three years at West Virginia, Jeffrey made 36 appearances (all in relief) and has a career ERA of 5.79. In a total of 37.1 innings, Jeffrey allowed 24 earned runs and had a strikeout to walk ratio of 47:37.

This past season, Jeffrey recorded four saves but a high ERA of 6.75. The arm talent is certainly there but Jeffrey has the option to return to WVU for his senior season and work on his command which needs some fine-tuning as he's averaging nearly one walk per inning. If he can clean up some things mechanically and pound the strike zone, Jeffrey could play his way into the top 10 rounds of next year's draft.

Albert Pujols and the Los Angeles Dodgers are coming off a series loss to the San Francisco Giants, which resulted in them losing the top spot in the National League West Division. They will now try to recover when they continue a road trip that will bring them to Pujols’ old stomping grounds — Busch Stadium, the home of the St. Louis Cardinals.
MLB・21 DAYS AGO
mediaite.com

WATCH: Pitcher Throws the Ultimate Blooper and Nearly Hits Himself with WORST Pitch in MLB History

Trailing the Oakland A’s 7-4 Tuesday night, the Kansas City Royals brought in left-hander Jake Brentz to pitch the sixth inning. Brentz, who was celebrating his 27th birthday, got off to a strong start, opening the inning by getting A’s batter Starling Marte to swing and miss at the first pitch. But his second pitch – well that one was juuuuuust a bit outside. Technically it was inside on the righty hitter, but regardless, it wasn’t what the Royals catcher called for.
MLB・12 DAYS AGO
ClutchPoints

The Los Angeles Dodgers have been without star pitcher Trevor Bauer for a long time as he continues to undergo investigations for sexual assault. Bauer has had his leave extended multiple times, and his return for 2021 is highly doubtful as the Dodgers aim to repeat as World Series Champions.
MLB・27 DAYS AGO
AP

ST. PETERSBURG, Fla. (AP) — Former NFL player Keith McCants was found dead Thursday at his home in Florida after a suspected drug overdose, investigators said. He was 53. The Pinellas County Sheriff's Office said in an email that deputies were called to a St. Petersburg home about 5:10 a.m. Thursday. McCants was dead inside the house, where others also apparently lived who made the 911 call.
NFL・25 DAYS AGO

3 MLB Pitchers Who Will Reach 3,000 Strikeouts After Max Scherzer

It was an unbelievable performance on Sunday for the future Hall of Famer, who carried a perfect game into the eighth inning and fanned nine in total. He is undoubtedly one of the greatest pitchers of this generation. Today, we’re going to look at three other active pitchers who could...
MLB・14 DAYS AGO
247Sports

RALEIGH, N.C. -- Coming off a College World Series run last spring, NC State lost a ton of talent to the MLB Draft. But the cupboard is far from bare, especially on the mound with multiple starters and bullpen arms returning for the Wolfpack. Regardless of where Chris Villaman fits...
MLB・14 DAYS AGO
bardown.com

MLB pitchers are seriously impressive athletes. Somehow, they are able to throw with relatively pinpoint accuracy, while also throwing way harder than most of us average Joe’s are capable of. Add in velocity changes, movement on pitches, and the fact that there’s always a possibility of a line drive come-backer.
MLB・12 DAYS AGO

Luka Garza was the No. 52 overall pick in the NBA Draft and worked hard to get a two-way contract from the Detroit Pistons. The player selected right after him, Charles Bassey, is going a much different route, holding out for a multi-year NBA contract. Even though he was the...
NBA・14 DAYS AGO
chatsports.com

If you've played fantasy baseball over on FanDuel, then you know the importance of draft percentages, especially in larger-field tournaments. Knowing who the competition is using enables you to think with a contrarian mindset. And if your under-the-radar play ends up hitting, well, you're one step closer to a victory.
MLB・10 DAYS AGO
The Game Haus

With their seventh-round selection in the 2021 MLB Draft, the Cincinnati Reds selected Kevin Abel, a right-handed pitcher from Oregon State. Abel enjoyed a decorated career as a member of the Oregon State baseball team. His career has already been hampered by an injury. He missed the entirety of the...
MLB・9 DAYS AGO

No. 15 West Virginia women’s soccer is back on the road after an extensive homestand to face James Madison on Thursday at the Dukes’ Sentara Park. Kickoff is set for 7 p.m. ET and it will be shown on FloSports. West Virginia (4-2-1) is making just its second road appearance...
SOCCER・12 DAYS AGO
Sports Illustrated

CBS Projects Hutchinson As The No. 2 Overall Selection By The Detroit Lions In Latest Mock Draft

Michigan Football fans are likely going to love the latest 2022 NFL Mock Draft released by CBS Sports earlier this afternoon. Described as a 'rising defensive star', Michigan's Aidan Hutchinson is projected to be the No. 2 overall pick in the 2022 draft - selected by none other than the Detroit Lions. Though most Michigan fans would likely prefer to see Aidan land with a more successful franchise, the idea of keeping No. 97 in Detroit for the foreseeable future is appealing to say the least.
NFL・11 DAYS AGO
milb.com

INDIANAPOLIS, IN (September 17, 2021) - The Minnesota Twins promoted infielder Ernie Yake to St. Paul from the FCL Twins on Friday. Yake was the club’s 10th Round pick in the 2021 draft out of Gonzaga University. Yake, 23, just began his professional career on September 6 when he suited...
INDIANAPOLIS, IN・10 DAYS AGO
Yardbarker

It's been a long road back for Anthony Gose. The former Toronto Blue Jay hasn't played in the Major Leagues since 2016, but five years later he'll return to the highest level. The former outfield has been promoted by the Cleveland Indians, MLB Network's Jon Morosi reports, but will return to the bigs as a left-handed reliever.
MLB・7 DAYS AGO
IBTimes

The Los Angeles Angels' chances of possibly securing a wild card in the American League may have gotten dimmer. This is following reports that star pitcher Shohei Ohtani may be done for the season due to a sore right arm. The 27-year-old Japanese player has been scratched in the Angels'...
MLB・10 DAYS AGO
WDTV

WVU Women’s Soccer ready to round out non-conference play

MORGANTOWN, W.Va (WDTV) - No. 18 West Virginia Women’s Soccer dominated at Dlesk Stadium yesterday, winning over St. Francais 5-0. The Mountaineers are gearing up for their last week of non-conference play with matchups against both JMU and Kent State. Their lead yesterday allowed some rest for the starters and...
MORGANTOWN, WV・13 DAYS AGO
Pittsburgh Post-Gazette

MORGANTOWN, W.Va. – As West Virginia coach Neal Brown prepared his team for Virginia Tech, he also spent some time crunching numbers. “By my calculation, Virginia Tech has been in possession of the Black Diamond Trophy for over 6,000 days now,” Brown said on Tuesday. “That’s a long time.”. Well,...
MORGANTOWN, WV・9 DAYS AGO
chatsports.com

Re-draft’s are a fun way to truly analyze the strength or weakness of a draft class and see where team’s selected a future bust for a future star. Bleacher Report recently ran through a re-draft for the 2020 NBA draft, having the 2021 NBA Rookie of the Year LaMelo Ball jump up to the No. 1 overall pick to the Minnesota Timberwolves, and rightfully so.
NBA・11 DAYS AGO