Sandra Bullock’s Daughter Laila Is a ‘Fighter’! Photos of the Star’s Little Girl Over the Years 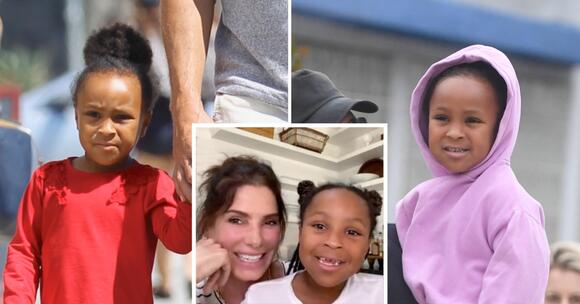 Sandra Bullock is passing down her strength, determination and focus to her daughter, Laila Bullock, who she’s confident will grow up to be a remarkable young lady. Though the Hollywood star’s youngest child is still a little girl, Sandra said she’s already exhibiting the qualities of a natural-born leader.

“Laila is just unafraid. She’s a fighter, and that’s the reason she’s here today,” the doting mom gushed during an interview with InStyle in May 2018. “She fought to keep her spirit intact. Oh my God, what she is going to accomplish. She’s going to bring some real change.”

Sandra became the mom of her dark-haired cutie in 2015, having adopted Laila five years after she experienced adoption for the first time. Speaking to Parenting in June 2018, Sandra revealed “something told [her]” to adopt son Louis Bardo Bullock after “Hurricane Katrina happened in New Orleans.”

The Blind Side actress was a single mom at the time her adorable tot came into her life, and she took on the role of doting parent of two when Laila later arrived. Fortunately, she hasn’t raised her babies on her own as she’s had the help and loving support of her boyfriend, Bryan Randall.

The Miss Congeniality alum has been dating the L.A.-based photographer since 2015, and they’ve created “a quiet, happy life together,” an insider exclusively told Closer in August 2020.

“The kids consider Bryan their father and he calls them his children. They’re a happy little family,” the source shared, noting the two put a huge emphasis on keeping Louis and Laila out of the public eye as much as possible. “It’s very sweet. They make sure the children are well balanced and don’t live a ‘Hollywood’ life.”

In order to give Laila and her big brother the normal childhood they deserve, Sandra and Bryan are all about “having fun with the kids,” a separate source told Closer in September 2019. “There’s no freaking out or screaming matches in their house. It’s a very zen household.”

Considering Louis and Laila are going to “become teenagers” sooner rather than later, things might get a little more difficult at home. Fortunately, “Bryan’s secret to being a great father — which Sandra tries to mimic — is just being present, listening, instilling good solid values and correcting them when they stray in a calm, conducive manner,” the insider explained.

To see photos of Sandra’s daughter, Laila, growing up through the years, scroll through the gallery below!

That's wonderful. plus I am so glad the word family don't. have be the same color. we come in all colors. God our beautiful family. That you God sit up in Heaven along time ago. and man didn't have anything to do with making the first family. Father I'm so glad you. design the blue prints Family. Amen

LITTLE People, Big World star Amy Roloff’s daughter Molly made a rare appearance in photos with her mother and brother Jacob. While many of the Roloffs appear on the TLC show, the 28-year-old has been known to stay out of the spotlight. Despite keeping a low profile, Molly seems to...
CELEBRITIES・7 DAYS AGO
Closer Weekly

Carmen Baldwin Is a Cutie! See Alec and Hilaria Baldwin’s Daughter Grow Up Over the Years

While it feels like just yesterday when Alec Baldwin and Hilaria Baldwin welcomed their first child together, daughter Carmen, the Hollywood couple has actually expanded their family five more times since. Despite having so many babies, Alec and Hilaria will always consider Carmen to be their beloved eldest girl. The...
CELEBRITIES・10 DAYS AGO
Closer Weekly

Sandra Bullock just doesn’t age. In the first teaser photo for her new Netflix film, The Unforgivable, the superstar is seen makeup-free while looking into a mirror, and she still looks so beautiful. Not that the 57-year-old is supposed to look stunning in the movie, as she plays an ex-con...
MOVIES・2 DAYS AGO
The US Sun

DR JEN Arnold shared an adorable picture of her nine-year-old daughter Zoey playing doctor as fans hope for another "future physician" in the family. The Little Couple stars have been "dropping clues" of a new season after a major lawsuit has delayed production for over two years. Dr Jen, 47,...
FAMILY RELATIONSHIPS・8 DAYS AGO

Daughter of fashion royalty, plus more pregnant stars at the Met Gala over the years

In honor of the 2021 Met Gala on Sept. 13, Wonderwall.com is taking a look back at the famous ladies who've attended the annual fashion extravaganza while pregnant in years past. Let's start with this fashion "it" girl… Anna Wintour's daughter, film and television producer Bee Shaffer, channeled "Bridgerton" in a Valentino gown while pregnant with her first child with husband Francesco Carrozzini during the 2021 Met Gala.
BEAUTY & FASHION・11 DAYS AGO
Cosmopolitan

Netflix's The Unforgivable: everything we know about the thriller starring Sandra Bullock

Netflix really does know how to tick our boxes, and their upcoming film, The Unforgivable, looks like another instant hit. Not only is the drama a US adaptation of an already much-loved thriller, British miniseries Unforgiven, but it's also going to star Sandra Bullock and Viola Davis. Did somebody say dream cast?
TV & VIDEOS・16 HOURS AGO
Ok Magazine

Jack Nicholson Living Out His 'Sad Last Days' Locked Away In His Mansion, Pals Fear The Hollywood Icon 'Has Dementia'

Hollywood icon Jack Nicholson has disappeared from public life, and pals of the actor are reportedly worried the end could be near. The 84-year-old Batman star is currently living out his “sad last days” at his Beverly Hills, Calif. mansion, an insider spilled to Radar. The Shining star has reportedly owned the 4-bedroom, 2-bathroom, 3,300 square foot abode since the ‘70s.
CELEBRITIES・16 DAYS AGO
romper.com

Sightings of Beyoncé and JAY-Z’s kids are few and far between. So when there is a new image, like when they all made cameos for their mom’s new Ivy Park Kids line, it’s always exciting. And the latest glimpse is no different. On Thursday, Beyoncé shared the cutest Boomerang video of her, Rumi, and Blue Ivy walking towards a helicopter.
CELEBRITIES・28 DAYS AGO

He’s the award-winning director behind classic films like A Beautiful Mind and Apollo 13, but Ron Howard deserves recognition for being the loving dad of his four kids. The Happy Days star shares his children, Bryce Dallas Howard, Paige Howard, Jocelyn Howard and Reed Howard, with his longtime wife, Cheryl Howard.
FAMILY RELATIONSHIPS・8 DAYS AGO
Amomama

Usher Raymond received a ton of funny backlashes from his Instagram followers after he recently shared a hilarious video of him and his daughter spending time together. Find out more. American singer, songwriter, and dancer, Usher Raymond IV remains one of the biggest stars in the music industry. A Grammy...
CELEBRITIES・2 DAYS AGO
Daily Mirror

Emmerdale star Mark Jordon has shared a rare photo of his daughter along with his new baby, who he shares with co-star Laura Norton. Mark, who played cafe waiter Daz Spencer in the ITV soap posted the family photo to celebrate his daughter Poppy's 21st birthday. Poppy, who looked beautiful...
CELEBRITIES・11 DAYS AGO
Hello Magazine

Kate Hudson caused quite the divide among her Instagram followers on Wednesday when she shared a new photo of her daughter, Rani. The Almost Famous actress was proudly showcasing the latest collaboration between her InBloom nutritional powders and Van Leeuwen ice cream when things took an unexpected turn. Kate has...
CELEBRITIES・1 DAY AGO

Doting on his daughters! Alex Rodriguez shares Natasha and Ella with ex-wife Cynthia Scurtis — and the former professional baseball player loves sharing their special moments on social media. The retired athlete, who called the teenagers the “best part of” his life in a touching September 2021 Instagram post, was...
CELEBRITIES・2 DAYS AGO
SheKnows

Coco Austin is getting hit with backlash for allowing her 5-year-old daughter Chanel Nicole to wear nail tips — plastic fake nails — for her class photo. On Thursday evening, the model and wife of rapper Ice-T shared photos of their daughter looking adorable in a white blouse with a red cardigan and matching hair bows. “School Picture day!!,” she captioned the images. “For the special occasion I let Chanel do mini tips to her nails.. I love doing her hair.. my little doll baby is what I call her….” tagging the girl’s Instagram account (which is managed by her parents). Many...
CELEBRITIES・12 HOURS AGO
codelist.biz

Nicole Kidman, Keith Urban and their daughters showed up at the (digital) awarding of the Golden Globes. What a nice surprise to see all of the Kidman-Urban family at one gig! Nicole Kidman, 53, and Keith Urban, 53, usually complete such appointments on their own because, like many other parents, they take care of the privacy of their girls Sunday Rose, 12, and Faith Margaret, 10. Photos showing the faces of the girls If you see both, you will look in vain on the Hollywood couple’s Instagram accounts or on magazine covers.
CELEBRITIES・21 DAYS AGO
TVGuide.com

Following a year filled with loss, 2021 has been marked by the deaths of multiple iconic actors, artists, sports legends, and other television personalities. These are the stars we've lost this year. 2 of 77 Getty Images. Melvin Van Peebles. Filmmaker Melvin Van Peebles has died at age 89. The...
CELEBRITIES・3 DAYS AGO
Amomama

True crime mysteries are something that tends to fascinate people in general. However, when a famous starlet is the subject of the true-crime story, it becomes ten times more fascinating, which is why Jean Spangler’s case was so widely spoken about. It has been many years since her disappearance, but...
CELEBRITIES・4 DAYS AGO
Amomama

Their dazzling radiance has taken over their entire country as these two sisters now illuminate the modeling world with their distinctive and breath-taking looks. Two albino sisters have captured the gaze of their home country Kazakhstan. 2-year-old Kamila Kalaganova and her older sister, 14-year-old Asel Kalaganova, have gained notoriety in the modeling industry, with everyone wanting to take their picture.
CELEBRITIES・7 DAYS AGO
IBTimes

Sarah Harding Net Worth: How Rich Was She Before Her Death?

Sarah Harding was a British singer-songwriter, actress and model who was most famous for being a member of the all-female pop group Girls Aloud. She died of breast cancer on Sunday. She was 39. At the time of her death, Harding had an estimated net worth of $9 million from...
MUSIC・19 DAYS AGO
crossroadstoday.com

Charlie Sheen is “having a ball” with his daughter Sam. The former ‘Two and a Half Men’ actor has confirmed his 17-year-old offspring has moved out of her mother Denise Richards’ house and is currently living with him and has dropped out of high school after the teenager caused a stir last week when she claimed she was “trapped in an abusive household”.
CELEBRITIES・10 DAYS AGO