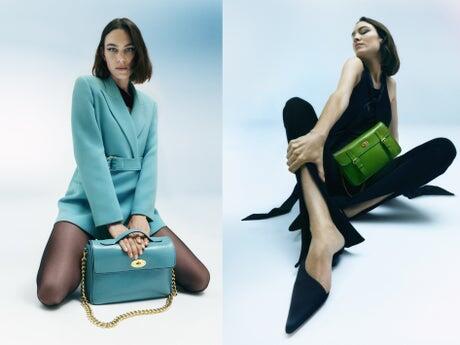 Launching this week, the new Mulberry x Alexa Chung line marks the latest collaboration between the model and the label, which famously named one of its most popular handbags, the Alexa, after her when it debuted in 2010.

This time around, the collection takes its cues from vintage satchels and the original Elkington briefcase that inspired the Alexa bag.

It’s filled with a range of boxy, masculine bags that are large enough to fit everything you could possibly need for the day, as opposed to some of the label’s evening bags, which are much smaller.

There are patent styles and also some that come in shiny crocodile finishes.

Colours range from earthy shades of dark chocolate and tan, to brighter green and blue hues.

But the inspiration behind the collection comes from the androgynous styles spearheaded by Lauren Hutton and Charlotte Rampling in the 1970s.

“The menswear element was very important to me because that’s how I like my handbags to be,” Chung told British Vogue .

In a statement, the 37-year-old explained how much the Mulberry Alexa bag has meant to her.

“The Alexa represents a moment in my life that I’m extraordinarily proud of and feel really lucky to have experienced,” she said.

“It’s nostalgic and sentimental and sweet and joyful. This time, I wanted to create something that straddled what the bag means to me personally, but could become that for someone else’s wardrobe.

“I wanted to make sure that it would endure, become a future classic. I welcome this extension of a relationship that’s been unfolding over decades.”

Thierry Andretta, CEO of Mulberry, added that Chung has been “an important part of Mulberry’s history”.

“Since Alexa first caught our eye with her unexpected, confident approach to style, she has also shown herself to be an equally exciting and talented designer who shares our appreciation for bold British design,” he said.

“This creative partnership is a natural evolution of our relationship. I am delighted to see her unique interpretation of the house codes in this capsule, which is a wonderful extension of the original Alexa family.”

Location. Location. Location. During fashion month, the real estate a designer utilizes is almost as important as the clothes. Choosing a remarkable venue makes a statement, and LaQuan Smith unveiled his spring collection at New York’s iconic Empire State Building. As Art Deco masterpieces go, it doesn’t get much better, but transforming a vintage skyscraper into a modern event space comes with a few annoyances. Logistically, traveling 102 floors and fitting scores of guests into an observatory space typically occupied by tour groups was a headache. Still, what happens in IRL is increasingly irrelevant. Smith’s show was designed and executed for the internet. Everything from the oh-so Instagrammable appearance of French poodles on the runway to the camera drones that glided overhead catered to the online audience who have supported Smith from the start.
DESIGNERS & COLLECTIONS・16 DAYS AGO
POPSUGAR

Whenever Zendaya steps on the red carpet, you can always count on a showstopping look. Thanks to her expert stylist Image Architect Law Roach, and her own undeniable presence, Zendaya arrived at the Venice Film Festival premiere for Dune looking incredible in every sense of the word. This might be Zendaya's best look yet, with her sultry, wet-look dress courtesy of Balmain.
DESIGNERS & COLLECTIONS・22 DAYS AGO
Page Six

The 2021 Met Gala came and went in a star-spangled blur. Best-dressed regular Sarah Jessica Parker wasn’t there; neither was Beyoncé. But stars aplenty still climbed those famous Metropolitan Museum steps for the “In America: A Lexicon of Fashion”-themed fête, dressed in their finest patriotic fashions. Below, the most memorable looks from Monday night’s red carpet.
DESIGNERS & COLLECTIONS・12 DAYS AGO
Complex

These are the names you need to know. After several (virtual) seasons, New York Fashion Week is finally back with IRL shows, parties, and events from Sept. 8 through 12 — and it’s expected to be better than ever. Most importantly, the Spring 2022 season marks the rebirth we’ve all been waiting for: the “revival” of New York Fashion Week includes a solid crew of designers showing their collection on the official calendar for the first time, the return of fashion’s biggest names, like Rodarte and Thom Browne, and a highly anticipated Met Gala (after its own year-long hiatus) to boot.
DESIGNERS & COLLECTIONS・18 DAYS AGO
Hypebae

Arguably one of the most stylish celebrities in Hollywood, Zoë Kravitz — and her effortlessly chic, impeccably dressed self — has grabbed the attention of social media recently as images of her and her rumored new boyfriend Channing Tatum began to circulate on the Internet. In the latest installment of our Celebrity Wardrobe Essentials series, we take a look at some of the actor’s best street style moments as well as her cool girl outfit essentials.
BEAUTY & FASHION・9 DAYS AGO
thezoereport.com

Pose star Mj Rodriguez is not afraid to use fashion as a form of self-expression. Ahead, see the 10 looks that encapsulate Rodriguez’s signature style aesthetic: casual, glamorous, and edgy.
BEAUTY & FASHION・10 DAYS AGO
hypebeast.com

Collecting Cars has announced “The Heselden Collection,” offering 17 unique, rare, and well-kept cars that are all at auction. Each model is a low-mileage example, but it’s the cars’ provenance and one-off attributes that make this collection one-of-a-kind — as seldom do you find a 1-of-50 Lamborghini Aventador LP 700-4 Miura Homage in the same pack as a 1993 Ford Escort RS Cosworth.
CARS・6 DAYS AGO

It was the date night to end them all. After a red carpet that spanned hours and countless celebs at the 2021 Met Gala, Rihanna and ASAP Rocky made a fashionably-late arrival to close out the ever-expanding party celebrating the Metropolitan Museum of Art’s Costume Institute and its return to the an in-person soiree, feting the museum’s new exhibition, “In America: A Lexicon of Fashion.” As was rumored earlier in the day, the music artist, entrepreneur and unofficial Met Gala deity arrived in a look from Balenciaga’s fall ’21 couture collection, a voluminous taffeta frock in black with a ruffled hood...
DESIGNERS & COLLECTIONS・12 DAYS AGO
NYLON

Discover the limited run of bags, shoes, and more — all featuring work by the legendary artist. When Coach Creative Director Stuart Vevers first unveiled the buzzy Coach x Jean-Michel Basquiat collaboration, he cited the late NYC artist as a fashion legend. “Basquiat is the ultimate cultural icon,” said Vevers in a statement, “and a symbol of the unorthodox creativity that is nurtured in a place like New York.” It’s that very connection that has driven the Coach brand to blend art history with style and release limited-edition bags, small leather goods, shoes, and more, all featuring Basquiat’s work.
NEW YORK CITY, NY・11 DAYS AGO
country1037fm.com

LIST: These are the MET Gala’s Most Searched Fashion Icons

Fashion’s biggest event – the MET Gala, is just around the corner. Some of the world’s most fashionable faces will be coming together on September 13th to deliver some jaw-droppingly glam looks. Fashion is fierce at the MET Gala. One day I hope I’m Instagramgfamous and get to go because...
DESIGNERS & COLLECTIONS・13 DAYS AGO
Hello Magazine

Not only did Emma Raducanu just become the first female British tennis player to win a Grand Slam championship in 44 years, but she's also the youngest British star to win a singles title – and did you see her on-court outfit? We're officially obsessed. The 18-year-old made history on...
TENNIS・14 DAYS AGO

London Fashion Week is underway, and among the many designers presenting their Spring 2022 collections is Jayne Pierson, whose new collection is titled 'Ceridwen' and is inspired by "Celtic mythology, organic shapes and nature," specifically the story of the Mabinogion in which Ceridwen is "a medieval enchantress, possessing a cauldron of poetic inspiration and the Tale of Taliesin."
DESIGNERS & COLLECTIONS・9 DAYS AGO
hourdetroit.com

When looking for style inspiration, the influencer has become the new go-to. These metro Detroit fashion influencers showcase all different styles on their Instagram pages, from girly and eclectic to edgy and retro. Consider turning to them as you plan your next look. Erin Joris (@authenticallyair) With a passion for...
APPAREL・12 DAYS AGO
TrendHunter.com

Nicholas Daley unveils the Blue Quilt collection designed for the Spring/Summer 2022 season with the help of artist Caleb Kunle. Kunle stars in the new seasonal campaign and helps in honoring musical icons such as Richie Havens and Davey Graham. It is a seasonal capsule of apparel that celebrates Black...
DESIGNERS & COLLECTIONS・11 DAYS AGO
Vogue

It’s been 40 years since Carolina Herrera stormed on to the fashion scene with a Metropolitan Club show to remember. The Studio 54 regular, who brightened up society pages alongside Bianca Jagger, channelled her knack for sublimely elegant dressing into a womenswear brand that was catnip for Manhattanites. Herrera’s own personal uniform – a fresh white shirt tucked into a voluminous skirt – became an exquisite exemplar of everything the house stood for: class and refinement, but always with a dash of playfulness. She is continually referenced on the moodboards of other designers today.
DESIGNERS & COLLECTIONS・11 DAYS AGO
Grazia

'We wanted these pieces to make people feel amazing – and happy,' says Henrietta Rix, one half of the design duo behind Rixo. Her co-founder is Orlagh McCloskey, with whom she lived for four years before the pair started Rixo from their student house. Six years later, the brand has been worn by everyone from Margot Robbie to Sandra Bullock – and they're just getting started. Today, Rixo debuted its spring/summer 2022 collection at London Fashion Week, heralding the return of fashion shows after a turbulent year and a half for everyone.
DESIGNERS & COLLECTIONS・9 DAYS AGO
TrendHunter.com

Although the adidas Forum Low has favored simple colorways rooted in 1980s heritage, the silhouette has built a healthy roster of more playful iterations. The latest?: A predominantly black ensemble inspired by Dracula. Akin to other recently-surfaced adidas Originals propositions, the upcoming sneakers indulge in Halloween-related colors and imagery ahead...
DESIGNERS & COLLECTIONS・13 DAYS AGO
hypebeast.com

The Estate of the late American artist Jean-Michel Basquiat has recently teamed up with Converse to debut a new capsule collection embodying four of his artworks. From gracing Dr. Martens boots to phone cases from CASETiFY, the neo-expressionist painter has left his trademark on several daily essentials throughout the past few years with his iconic raw and edgy paintings.
DESIGNERS & COLLECTIONS・10 DAYS AGO