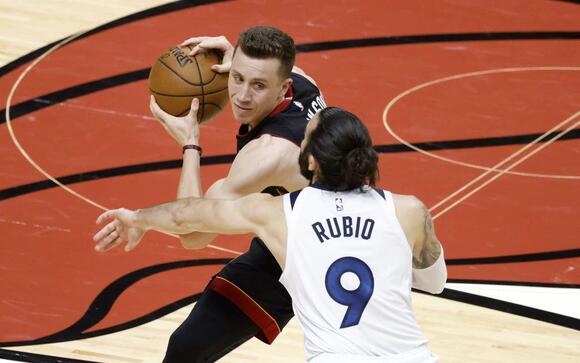 With a projected $50 million in cap room, the New York Knicks are going to be extremely active once NBA free agency opens up next month.

New York is coming off a surprising playoff appearance and promises to be aggressive under front office head Leon Rose.

Could that potentially include stealing star guard and restricted free agent Duncan Robinson from the conference-rival Miami Heat? Ian Begley of SNY notes that there’s interest from New York’s front office in Robinson.

“The interesting thing with (Kendrick) Nunn and Duncan Robinson is that Miami will be forced to make a difficult decision if both players sign big offer sheets. The Heat can – and probably would – match offers to Dunn and Robinson. But bringing both players back on big contracts could hamper Miami’s future flexibility,” Begley reported . “Robinson will probably have plenty of suitors this summer. This isn’t surprising, but Robinson has fans within the New York Knicks organization.”

The expectation is that Robinson, 27, is going to have a ton of suitors on the restricted free-agent market. A former undrafted free agent out of Michigan, he’s turned into one of the best perimeter shooters in the game.

Since the start of the 2019-20 campaign, Robinson is averaging 13.3 points on 43% shooting from distance. This past season saw him elevate his game beyond simply being a stationary three-point shooter.

As for the Knicks, they are in a much better position than other teams to simply sign Robinson outright. As stated above, they are expected to have the most cap room in the Association. This means New York wouldn’t have to engage the Heat in sign-and-trade scenarios if its brass is actually sold on Robinson being a key component for a championship contender down the road.

How might Duncan Robinson to the New York Knicks work?

The other option here is that it becomes clear Robinson will be headed to the Big Apple on a big-time free-agent deal.

Likely to decline the options on Andre Iguodala and Goran Dragic, Miami could have as much as $20 million to spend under the cap. Would that be enough to match any offer to Robinson? It really depends on the veteran’s market.

If not, a sign-and-trade between the two Eastern Conference playoff teams from a season ago could be mutually beneficial. 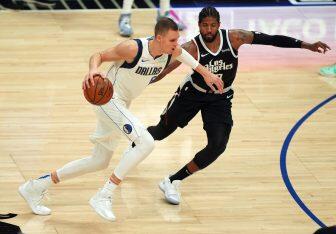 This would include New York giving up one of its two first-round picks in the 2021 NBA Draft ( 19th and 21st ) overall to Miami in order for the Heat to take back a contract. Perhaps, Kevin Knox’s $5.8 million salary would head to South Beach. In turn, the Heat add more assets to potentially acquire another star player while New York saves enough cash to sign a max-level free agent on the open market.

Either way, the New York Knicks are going to be one of the stories to watch when the NBA offseason really gets going. Duncan Robinson is also going to be among the most-coveted free agents. This certainly warrants our attention moving forward. That’s especially true if New York somehow finds a way to pull off another blockbuster trade ahead of the NBA Draft.

Frank Ntilikina came into the NBA out of France as 19 year old in the 2017 draft. The New York Knicks selected him with the eighth overall pick. Yet, after just four seasons on the Knicks he does not appear to be in their plans any longer and is now a free-agent (see Tweets below from Marc Berman of the New York Post on August 1 and Keith Smith of Spotrac on August 11).
NBA・11 DAYS AGO
AllPacers

On Friday, Hoops Hype released the list of their top-22 power forwards in the NBA. The article from Hoops Hype can be read in the hyperlink that is above. Domantas Sabonis of the Indiana Pacers made the top-five (fifth on the list). The list of the players who made their...
NBA・7 DAYS AGO
AllPacers

The New York Knicks didn’t have widespread changes to their roster this season as many had predicted. Armed with the most cap space in the NBA and multiple first-round draft picks, many expected New York to make a splash. The old Knicks would have made that splash. Even if the...
NBA・4 DAYS AGO

The New York Knicks made waves in the offseason when they scooped up Kemba Walker and Evan Fournier and also brought back some of their own free agents like Derrick Rose, Nerlens Noel and Alec Burks. Another piece that will be implemented back into the lineup next season is Mitchell...
NBA・1 DAY AGO
Malori Carlow

The Dallas Mavericks have signed free agent former Knicks Point Guard Frank Ntilikina on Thursday. The New York Knicks had previously declined to extend the PG a qualifying offer. This is not the first we are hearing of this news as NBA Insider Marc Stein tweeted out on Tuesday that Dallas was the most likely landing place for the guard. Frank Ntilikina averaged 5.5 points and 2.7 assists while he was with the Knicks.
DALLAS, TX・13 HOURS AGO
Empire Sports Media

The New York Knicks rewarded All-Star power forward Julius Randle with a massive extension this off-season. With the two sides connecting on a four-year, $117 million deal, Randle will remain with the team until at least the 2024-25 season, including a player option during the 2025-26 campaign when he turns 30-years-old.
NBA・4 DAYS AGO
Yardbarker

Do the New York Knicks already have their long-term solution at point guard on the roster?

The New York Knicks have set themselves up perfectly for the future, whereas over the past few seasons, they’ve made malicious moves that have disrupted chemistry and convinced star players to take their talents elsewhere. It was only one year ago that fans believed the Knicks might trade Julius Randle...
NBA・13 DAYS AGO

When considering the New York Knicks’ most underrated player, most may point to third-year shooting guard RJ Barrett. Barrett established himself as one of the best players on the team last season, averaging 17.6 points, 3.0 assists, 5.8 rebounds, and shooting 44% from the field. However, I would argue that Barrett is rated properly and took a significant step forward in his development at 20 years old.
NBA・12 DAYS AGO
Yardbarker

The Miami Heat went on a surprising run during the 2020 NBA Playoffs. In the Orlando Bubble, the Miami Heat were the 5th seed in the Eastern Conference. But after going past the Pacers, upsetting the Bucks, and defeating the Boston Celtics, the Heat reached the 2020 NBA Finals. The...
NBA・1 DAY AGO
chatsports.com

Julius Randle, RJ Barrett, New York Knicks. (Photo by Tom Pennington/Getty Images) The New York Knicks are ready to bring their revamped roster into the 2021-22 NBA season and build off of their success from last year. Two weeks ago, the NBA announced every team’s schedule for next season. We’ve...
NBA・14 DAYS AGO
South Florida Sun Sentinel

With all the massive money tossed around by the Miami Heat over the past 10 months, it is somewhat remarkable that a $90 million contract seemingly flew under the radar. Jimmy Butler’s four-year, $184 million extension? Well, you are talking five-time All-Star. Bam Adebayo’s five-year, $163 million extension? At 24, already an All-Star and Olympic gold medalist. Kyle Lowry’s three-year, $85 ...
NBA・13 DAYS AGO

Atlanta Hawks point guard Trae Young has the internet buzzing again. After appearing in viral offseason videos of playing pickup basketball with rapper 2 Chainz and actor Adam Sandler, it was a tweet of Young’s own that brought the social media wrath upon him. “Yo when we gonna say Drake...
NBA・13 DAYS AGO
chatsports.com

NY Knicks: 3 players who might not finish the season with NYK

NY Knicks, Kevin Knox, Mitchell Robinson, Obi Toppin (Photo by Dave Reginek/Getty Images) The NY Knicks are finally competent again and it’s actually fun to be a fan of the team for the first time in quite a while. Every move that’s been executed over the past year seems to...
NBA・11 DAYS AGO
chatsports.com

New York Knicks: 3 Players who will benefit the most from Kemba Walker

The New York Knicks’ addition of Kemba Walker has the city amped up for next season. With the Knicks bringing back largely the same roster as last season and signing Evan Fournier and Kemba Walker, there is already a strong expectation that this team can build off of their success from last season.
NBA・12 DAYS AGO
FanSided

A popular conversation constantly revolving around not just the New York Knicks but the whole NBA is how some of basketball’s all-time greats would fair in different eras. Part of what makes the topic so interesting and fun to speculate about is the fact that every era of the game is so incredibly different. The NBA today is nothing like it was during its inception in the mid-1940s. Heck, it is very different now from what it was like even 10 years ago.
NBA・15 HOURS AGO

The New York Knicks finished last season with a good record. Not great, just good. But considering the Knicks’ pitiful play in the 21st century and low preseason rankings, the season was labeled a massive success. And it was. The 2021-22 season is forthcoming, though, and the “massive success” of...
NBA・12 DAYS AGO
chatsports.com

NBA Rumors: DeMar DeRozan Had 'Sincere' Interest In The Knicks

12x All-Star DeMar DeRozan had an enormous opportunity this past offseason. After 9 seasons with the Raptors, and 3 with the Spurs, DeRozan had seen little success in the playoffs, and many were doubting his value as an NBA All-Star. As a free agent, DeRozan was at a crossroads in...
NBA・6 DAYS AGO
FanSided

New York Knicks: Why Kemba Walker should be a 3-point shooter

There is an expectation that guard, Kemba Walker, will be the secondary ball-handler/ playmaker for the New York Knicks during the 2021-22 season. Dan Favale of Bleacher Report stated on August 4th that Walker’s ability to create a shot from scratch makes him the clubhouse leader to be the secondary ball-handler/ playmaker on the team.
NBA・13 DAYS AGO