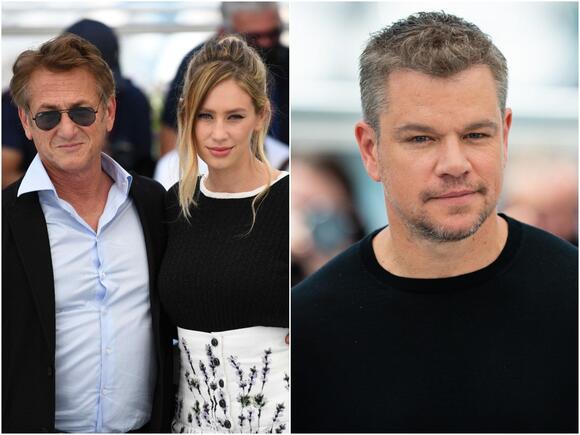 Sean Penn said his decision to star in his daughter's debut film was influenced by Oscar winner Matt Damon.

"Flag Day" premiered at the Cannes Film Festival over the weekend and stars Penn and his daughter, Dylan, as a father and a daughter, who's struggling to make amends with her fractured family.

Penn was already directing the family drama film, but had never before acted in a film he had directed. Indiewire reported that during the press conference after the film's premiere, Penn explained that Damon persuaded him to be in the film.

"A month and a half before shooting started, Matt Damon called me, not to say he could or couldn't, but that I was a stupid schmuck not to take this opportunity to act with my daughter in this thing," Penn said.

"That was the last straw. Once I decided to do that, it was a big burden off me."

The elder Penn was not the only person who had doubts about starring in the film.

At the press conference, Dylan said: "I was apprehensive before I said 'yes.' I first read it when I was 15 and came back to it when I was 30. I could reference my own experiences and bring something to this character."

"Flag Day" is based on a memoir, "Flim-Flam Man: A True Family History," written by Jennifer Vogel about her father's double life as a con man and bank robber. In the film, Dylan plays Vogel while Penn plays her father, John Vogel.

Penn said when he read the book, he saw his own daughter's face.

"In a film about deception, about the search for truthfulness, it goes back to Dylan's face," he said. "I find her uncontrived."

He added: "When you can put a camera on an actor listening, that tells the whole world of truth and deception. My cinematic focus was on Dylan's face to tell the story."

The producer William Horberg and Jon Kilik had tried more than once to persuade Penn to take the role as John Vogel before Damon's intervention.

"As a producer, you dream," Horberg told the conference. "When I dreamed from the beginning to make the movie with Sean Penn as John Vogel, to have a real father and daughter play a father and daughter, knowing Sean's commitment to authenticity, this was a special way for this story to be told.

"We didn't compromise. We had to fight hard to get the resources, to get Sean to do this."

The only thing Penn was good in was Fast Times At Ridgemont High. I swear that movie was about me and my friends in the mid 70's in high school.

Damon was correct and Penns movie was a bomb. Penn is a worthless human.

Sean is about as intelligent as Spicolle that he played on "Fast times at Ridgemont High." And the I don't agree with Damon on most things, the fact of the science is there's not enough science for many to believe they can bank their health on this vaccine. Even emergency use laws exempting anyone from being able to sue the companies from any side affects, surely doesn't help reassure anyone either.

Matt Damon: “A good father is willing to change for his children”

In the movie The Stillwater Girl Matt Damon is an American worker who reaches Europe, where his daughter is accused of a murder that recalls the one that involved Amanda Knox in Perugia. “In the moments that matter,” says the actor, “every parent is willing to give the best of themselves and fight for those they love”
CELEBRITIES・14 DAYS AGO
Variety

There are more than a few surprises coming for awards watchers and film fans this Christmas. George Clooney’s latest, “The Tender Bar,” looks to be one of them. Amazon Studios will release the film in select theaters on Dec. 17, the studio announced Wednesday, followed by a nationwide rollout on Dec. 22. Amazon Prime Video members will have access to the film on Jan. 7. Clooney is back in the director’s chair for this adaptation of J.R. Moehringer’s memoir of the same name. Ben Affleck stars alongside Tye Sheridan (“Ready Player One”), Christopher Lloyd and Lily Rabe (“American Horror Stories”). Oscar winner...
MOVIES・4 DAYS AGO
Best Life

If your parents are Danny DeVito and Rhea Perlman, we can only imagine it's hard to break away from the bright lights of Hollywood. And seemingly, the former couple's three children have all been lured. At one point or another, all of the DeVito-Perlman kids have dabbled in acting, but it was recently announced that their oldest child, 38-year-old Lucy DeVito, will be starring alongside her father on a new series. To see Lucy now and find out what she's working on with her dad, read on.
TV & VIDEOS・10 HOURS AGO
wearemoviegeeks.com

The Ben Affleck renaissance has been ongoing for a decade now, and it’s marked an incredible turnaround for an actor that was fighting to remain relevant after a string of critical and commercial duds, while he was much more likely to be found on the front pages of the tabloids than the trades.
MOVIES・19 DAYS AGO
GOBankingRates

Winning an Oscar is a pretty big deal. In addition to the prestige that comes with taking home Hollywood's most prestigious statuette, it can also help increase the star's future earning potential....
CELEBRITIES・9 DAYS AGO
codelist.biz

▷ Sky Cinema Bourne: Matt Damon as agent with no memory in all hit movie on one …

Jake Gyllenhaal: ‘It Was Very Important’ to Break Stigma of Playing Gay Roles with ‘Brokeback’

In a new interview with The Sunday Times (via Insider), Jake Gyllenhaal reflected on playing a gay role in “Brokeback Mountain” as a straight man. The actor earned his first and only Oscar nomination to date thanks to his performance opposite Heath Ledger in the Ang Lee-directed romance drama. The Times asked if people would have “a different reaction” to two straight actors tackling the romantic leads in “Brokeback Mountain,” to which Gyllenhaal replied, “I don’t know. Maybe?” “Part of the medicine of storytelling is that we were two straight guys playing these parts,” Gyllenhaal added. “There was a stigma about playing...
MOVIES・7 HOURS AGO

Clint Eastwood is one of Hollywood’s most notorious figures – known for his dashing good looks, those wildly intense stares, and exuding a confidence that some people came to fear – so it’s no shocker that he has made some enemies along the way, too. “Right Turn, Clyde.” Now that that’s settled, let’s get down to the good, the bad, and the ugly – about why some of Hollywood’s other greatest actors, like John Wayne and company, actually hate Clint Eastwood.
CELEBRITIES・18 DAYS AGO
Inverse

In the backseat of a car, wearing swimming goggles and holding an oversized flashlight, 8-year-old Alton (actor Jaeden Martell, pre-It and Knives Out) is visibly enraptured while reading a Superman comic. This little reference isn’t intended to be too subtle; Alton resembles Clark Kent in more ways than one. Raised...
TV SERIES・24 DAYS AGO
purewow.com

This Twisty Thriller Just Became the #1 Show on Netflix

If you find yourself constantly searching for the next Gone Girl or a show like Behind Her Eyes that will leave you guessing until the last minute, then you've come to the right place. The newest series to hit #1 on Netflix is Clickbait, and this looks a psychological thriller...
TV SERIES・29 DAYS AGO

Tori Spelling’s Kids: Meet Her 5 Children From Oldest to Youngest

Tori Spelling was born to be a mother and it just so happens that she got to be one five times over during her marriage to Dean McDermott. Meet the family!. Tori Spelling has seen it all in her 15-year marriage to actor Dean McDermott: whirlwind romance, heartbreak, health scares and financial troubles. But despite the ups and downs that come with any marriage, Tori and Dean have always been able to be on the exact same page about one thing: their five adorable children. No matter what the couple is going through, their kids come first. And as we’ve seen from countless social media tributes over the years, the Beverly Hills, 90210 star and Dean shower their kids with love and affection.
BEVERLY HILLS, CA・12 DAYS AGO
Popculture

Yellowstone fans are eternally crushed that they can't enjoy the show on Netflix. There's sadly no sign that the Paramount Network show will ever come to the streaming platform, given that it's currently streaming on Peacock and its spinoffs are set for Paramount+. However, there's a movie currently in Netflix's Top 10 that Yellowstone fans should watch the next time they're itching for a movie night. That film is Wind River.
MOVIES・23 DAYS AGO
E! News

Watch: Kim Kardashian Reveals Which West Child Makes Mornings a "Struggle" Kim Kardashian is helping her fans to keep up with her kids' wildly different personalities. On Thursday, Sept. 16, the 40-year-old Keeping Up With the Kardashians alum is a guest on The Ellen DeGeneres Show. During the visit, Kim discussed the differences between the four children she shares with estranged husband Kanye West: North West, 8, Saint West, 5, Chicago West, 3, Psalm West, 2.
CELEBRITIES・11 DAYS AGO
wegotthiscovered.com

It’s hard to deny that Bruce Willis has been in some absolutely phenomenal films — Looper, Pulp Fiction, and Die Hard are certainly proof of that. Still, he’s been in quite a few movies that were critical flops as well. According to stats from FlixPatrol, one of his moves that has a measly 15% Tomatometer rating on Rotten Tomatoes is somehow one of the most popular films on the entirety of Netflix.
TV & VIDEOS・13 DAYS AGO
wegotthiscovered.com

A Forgotten Emma Watson Movie Is Blowing Up On Netflix

Despite the glowing tributes being paid to the actress online, many of which read like an obituary for a career that had been brought to a close far too soon, Emma Watson didn’t retire from acting. Obviously, rumors spread like wildfire on the internet so the tears were already flowing before her agent, and then the Harry Potter veteran herself, put paid to the speculation.
MOVIES・22 DAYS AGO
Popculture

The number one movie on Netflix's Top 10 Movies in the U.S. chart is surprisingly not a Netflix original. The spot is held by the 2012 thriller Safe House, starring Denzel Washington and Ryan Reynolds. The film also holds the number two slot on Netlfix's overall top 10 charts, just behind the British series Sex Education, which had its third season released on Friday.
MOVIES・9 DAYS AGO
HuffingtonPost

A British actor who moved to Hollywood to pursue stand-up comedy has been missing for several days, friends and associates say. The Los Angeles Police Department has completed a missing person’s report. Tanya Fear, whose credits include “Doctor Who” and “Kickass-2,” has “gone missing in the LA/Hollywood Bowl area” and...
LOS ANGELES, CA・14 DAYS AGO
HollywoodLife

Shiloh Jolie-Pitt, 15, Goes For A Casual Look In Sweats While Heading To A Dance Studio — Photo

Shiloh Jolie-Pitt looked so grown up as she arrived at a dance studio in Studio City, California dressed in super casual attire. Shiloh Jolie-Pitt, 15, was spotted walking all by her lonesome into a dance studio in Studio City, California on Sunday, August 29. The teenage daughter of Angelina Jolie and Brad Pitt looked super casual in a gray sweatshirt and black sweatpants for the outing. She carried a backpack into the studio and had on black Vans sneakers, while her hair was pulled up into a messy bun. Shiloh also sported a protective black face mask to keep herself safe amid the ongoing COVID-19 pandemic.
THEATER & DANCE・28 DAYS AGO