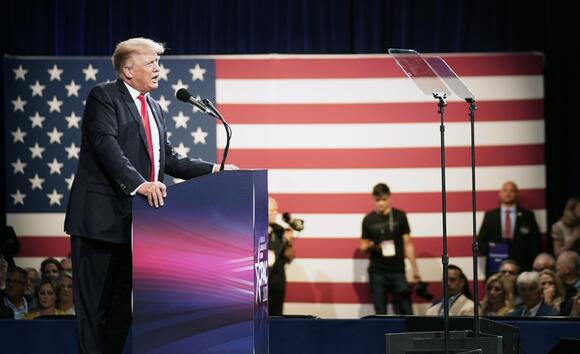 Former President Donald Trump on Sunday voiced concerns about "unexpected rulings" in the Supreme Court , saying the court has issued rulings unfavorable to the Right "because the nine justices do not want to be packed."

Throughout Trump's 2020 election campaign, the former president alleged Democrats would attempt to add more justices to the Supreme Court in an effort to limit the influence of the three conservative-leaning justices he appointed during his time in office, a sentiment he echoed during his remarks before the Conservative Political Action Conference on Sunday.

BUSY HEALTHCARE AND ABORTION AGENDA FOR SUPREME COURT: EIGHT CASES TO WATCH IN 2021-2022

While it is unclear which cases Trump was referencing, the court previously rejected his bid to overturn the 2020 general election results, allowed his tax returns to be divulged to a New York prosecutor, and upheld the Obama-era Affordable Care Act , which Trump was eager to dismantle.

The former president said on June 23 that he was left "disappointed" by the six justices leading the conservative majority — despite the fact that he appointed Justices Neil Gorsuch, Brett Kavanaugh, and Amy Coney Barrett to the high court — after they opted not to resolve several major cases in his favor.

Despite the former president claiming disappointment in the Supreme Court, other recent 6-3 decisions by the majority of justices, such as upholding Arizona's voting law in one case and a decision to toss California’s donor disclosure requirement, have favored the Right.

President Joe Biden has also formed a Supreme Court commission to discuss the current structure and framework of the justice system, which has led to discussions about court expansion .

Others in the party have urged caution, with centrist Sens. Joe Manchin and Kyrsten Sinema indicating they would not support expanding the court.

Given the Democrats' slim majority in the Senate, any court expansion measure is likely to fail without both senators' support.

Trump is such an embarrassment to this country. He don’t shut up - can’t admit he lost. He’s unhappy the Supreme Court isn’t doing his bidding. Thought he appointed them, they’d owe him for life. He was surprised when they wouldn’t support overturning the certification of Biden. That’s why he pushed to get ACB in right before the election for just in case he lost. He must have known he was going to lose.

Is this man-boy going to ever stop whining. He continues to cry like the little boy he is. Why would anyone listen or follow the lying SOB?

"Stacey, would you like to take his place?" Trump asked at a Georgia rally Saturday evening. "It's OK with me."
GEORGIA STATE・10 HOURS AGO
13WMAZ

MACON, Ga. — It was four hours of former President Donald Trump allies, a slate of Trump endorsed candidates, and the former president himself talking to a crowd of thousands at the Georgia National Fairgrounds. Without a doubt, the 2020 presidential election was still top of mind at the Save...
GEORGIA STATE・10 HOURS AGO
The Guardian

At the end of a week in which Mitch McConnell refused to rule out blocking a Joe Biden supreme court pick if Republicans take the Senate next year, an expert said the court may have reached a “turning point” regarding public perception of its politicisation and need for reform. In...
CONGRESS & COURTS・1 DAY AGO

Three Supreme Court justices delivered the same plea in rapid succession in recent days: Don’t view justices as politicians. The justices have reason to be concerned. Recent polls show a sharp drop in approval of a court now dominated by conservatives. The call by justices Clarence Thomas, Stephen Breyer and Amy Coney Barrett for the public not to see court […]
CONGRESS & COURTS・1 DAY AGO
KFOR

President Joe Biden will not use the powers of his office to shield Trump administration records from the purview of the Jan. 6 Select Committee.
PRESIDENTIAL ELECTION・2 DAYS AGO
POLITICO

Millions of women have been fearing this day for nearly 50 years: an ultra-conservative Supreme Court is on the verge of overturning Roe v. Wade, the legal cornerstone of reproductive rights in this country. Just weeks after the Court allowed Texas to ban nearly all abortions, it has now taken...
CONGRESS & COURTS・2 DAYS AGO
Washington Post

The Supreme Court has only itself to blame

A raft of recent polls shows that the Supreme Court has lost stature in the eyes of the public. Most dramatically, a Marquette University Law School poll finds the court’s approval dropping from 66 percent a year ago (and 60 percent as recently as July) to 49 percent. In the wake of the court’s decision to unabashedly rewrite Section 2 of the Voting Rights Act and to duck ruling on the Texas abortion bounty law, Democratic support plunged from 59 percent in July to 37 percent.
CONGRESS & COURTS・3 DAYS AGO
MSNBC

For most American voters, secretary of state — at the state level, not the cabinet secretary who leads the U.S. State Department — is probably a fairly obscure government office. In much of the country, these officials work behind the scenes on unglamorous tasks such as election administration, and few reach the household-name level.
PRESIDENTIAL ELECTION・3 DAYS AGO
SFGate

As the U.S. Supreme Court nears the start of a term that will pose fresh challenges to its institutional legitimacy, a new poll is showing declining confidence in the court and growing concern that it is driven by politics. The Marquette University Law School poll, released Wednesday, found nationwide approval...
CONGRESS & COURTS・4 DAYS AGO

It is a central principle of law: Courts are supposed to follow earlier decisions – precedent – to resolve current disputes. But it’s inevitable that sometimes, the precedent has to go, and a court has to overrule another court, or even its own decision from an earlier case. In its...
CONGRESS & COURTS・6 DAYS AGO
arcamax.com

Editorial: No to packing the Supreme Court, yes to 18-year term limits

Justice Amy Coney Barrett showed a tin ear in choosing when and where to declare that the Supreme Court “is not comprised of a bunch of partisan hacks.” She was speaking in the presence of Senate Republican Leader Mitch McConnell, at a university facility in Kentucky that bears his name.
CONGRESS & COURTS・6 DAYS AGO
NBC News

Law and politics are different things. Judges do law and politicians do politics. At least, that’s what some of the Supreme Court’s current members would like us to believe. The justices should carefully consider the types of rhetoric they employ in defending their positions and criticizing those of their colleagues...
CONGRESS & COURTS・7 DAYS AGO
Black Enterprise

U.S. Representative James Clyburn (D-S.C.) said he pressed President Joe Biden about nominating a Black woman to the Supreme Court before he gave his endorsement. Clyburn confirmed reports that he pressed Biden in advance of the Democratic Primary debate last February on Bloomberg TV’s Balance of Power. At the end of the debate, Biden expressed his desire to name the High Court’s first Black female justice.
CONGRESS & COURTS・9 DAYS AGO

During a lecture Thursday (Sept. 16) at the University of Notre Dame, U.S. Supreme Court Justice Clarence Thomas warned against “destroying our institutions because they don't give us what we want, when we want it," defending the court’s independence from political polarization, The Washington Post reported. Thomas, a conservative who...
CONGRESS & COURTS・9 DAYS AGO
Vanity Fair

Supreme Court Justice Clarence Thomas, arguably the bench’s most conservative member, bemoaned the politicization of judges and warned against the highest court becoming “the most dangerous” branch of government during a Thursday speech at the University of Notre Dame. “I think the media makes it sound as though you are just always going right to your personal preference. So if they think you are antiabortion or something personally, they think that’s the way you always will come out,” said the George H. W. Bush–appointed justice, per a Washington Post report. “They think you’re for this or for that. They think you become like a politician. That’s a problem. You’re going to jeopardize any faith in the legal institutions.”
TEXAS STATE・9 DAYS AGO
Business Insider

Justices Amy Coney Barrett and Stephen Breyer want to convince you that the Supreme Court isn't political, but experts say 'it's naive to think people will' believe them

Justices Amy Coney Barrett and Stephen Breyer have tried to defend the Supreme Court's integrity. "This court is not comprised of a bunch of partisan hacks," Barrett said at the McConnell Center this week. Yet experts said they're ignoring the realities of how politics affects the court and its justices.
CONGRESS & COURTS・10 DAYS AGO
The Guardian